During the heyday of the laterna, an early mechanical musical instrument popular in Greece in the late 19th and early 20th centuries, playing instrumental music and singing were gradually being supplanted by gramophones and radios in most households. It was the beginning of on-demand home listening and drastically reduced the amount of amateur at-home music making. 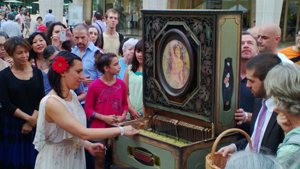 Last Thursday, the weather finally cooled down, so I ventured outside for a triple bill at the Lincoln Center Out-of-Doors Festival to hear the otherworldly Ukrainian singer Mariana Sadovska perform her eerie cantata Chernobyl – The Harvest backed by the Kronos Quartet, followed by singer/songwriter/multi-instrumentalist Emily Wells, and finally Shara Worden’s uncategorizable My Brightest Diamond. In between sets, I rummaged through the program and saw a listing for a performance the following night involving a rare Greek musical instrument called the laterna. According to the notes, it is “a small, portable, hand-cranked piano with a wooden cylinder spiked with thousands of nails, each representing a musical note.” Wow! I had to come back on Friday, and so I did.
In the interim I googled laterna. I found a short audio clip on YouTube which gave me some idea of what the instrument sounds like, but no video alas. I also discovered a whole website devoted to the laterna in Greek and English, but most of the navigation only works on the pages in Greek. Then I looked up the player for the Lincoln Center gig, Magda Giannikou. Again, not much to go on internet-wise—the Lincoln Center Out-Of-Doors page about her (which contained the same info in my hand-printed program), a placeholder for an as yet to be launched website for her band, Banda Magda, and a MySpace (yes, MySpace!) page. So I listened on MySpace for a while and was particularly intrigued by a song called ”Mystery.” After hearing the minute-long snippets for four of her songs, none of which featured a laterna as far as I could hear, I was asked by a MySpace bot for all my Facebook information, so I left the site. For all the claims people make about the web being the easiest way to experience music, live still wins.

Anyway, experiencing a live laterna performance turned out to be more fascinating than just hearing it or seeing a photo of it; at least it was for me. A crowd huddled around Magda Giannikou, seemingly hanging on every note, as she spun a lever on a very fragile hand painted wooden box which was propped up somewhat precariously on wooden legs. It seemed perilously close to falling down several times during her set and probably would have were it not for someone holding it up for her. Everyone applauded her rapturously, but were they applauding her performance or the instrument or both? A performance on a laterna is really not the same as a performance on, say, a violin or a guitar, since it is preset like that of a player piano or a music box. And the cylinder inside the laterna, which is what triggers the nails and makes them sound out, only has room to hold a total of nine short pieces of music—a rather limited repertoire which in this case consisted of traditional Greek folk songs. Performing on the laterna means merely turning the crank, which presumably affects tempo, but still all of the pitches and basic rhythmic relationship have already been predetermined. Perhaps everyone was amazed that it was possible to get sound out of such a rickety antique. I have no intention of undervaluing Giannikou’s contribution to this event; I clapped as vigorously as everyone else there. She was graceful and engaging throughout; she actually had a stage presence that was as confident as someone who was playing an instrument that required prodigious technique. At one point she even sang along with the laterna and she has a very intriguing voice.

Here’s a brief video excerpt from the performance, recorded on my smartphone, which I post here with Magda Giannikou’s approval.


Truly magical, I think, but it still begs the question: where does mechanical manipulation end and musical performance begin? During the heyday of the laterna in the late 19th and early 20th century, musical instruments were gradually being supplanted by gramophones and radios in most households. It was the beginning of on-demand home listening, a cultural phenomenon that drastically reduced the amount of amateur at-home music making. No less a musical celebrity than John Philip Sousa denounced pre-recorded music, which he called “canned music,” both on aesthetic as well as financial grounds. A century later, however, we realize that machines designed to reproduce music can also be messed with to create brand new music—e.g. turntable scratching, glitch, etc. Also instruments that people once thought anything could be played on, e.g. the piano, proved to be finite as well. An un-retuned piano can only play music in 12-tone equal temperament and even when it is re-tuned you are still limited by the finite number of keys as well as having only 10 fingers. Strangely, Conlon Nancarrow’s original music for pre-punched player piano rolls (a device which originally limited what a piano could play) showed us all kinds of amazing music that human pianists will never be able to play. Could similar experimentation be possible on the laterna?