Keep Dallas Wired: The Dallas Opera Plugs Into Death and the Powers

While his background is as academically rigorous as it could possibly be, Tod Machover’s compositional work, as well as his instrument and software design, leans in a direction that can certainly be described as approachable to a broad audience. This was on display in the recent production of his Pulitzer-nominated opera Death and the Powers by The Dallas Opera. 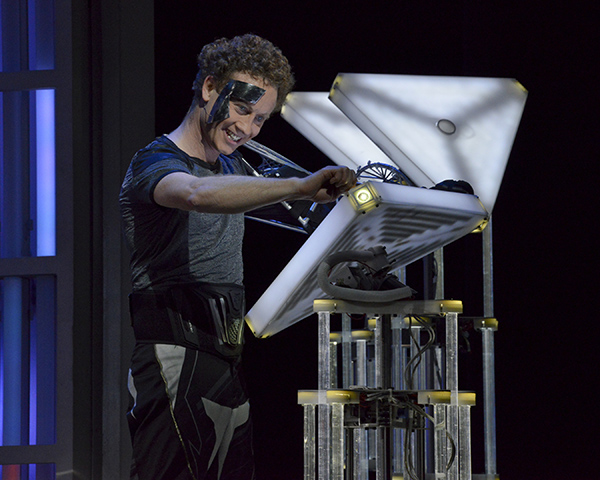 Tod Machover has a real knack for tapping into popular consciousness. While his background is as academically rigorous as it could possibly be, his compositional work, as well as his instrument and software design, leans in a direction that can certainly be described as approachable to a broad audience. It takes a certain sensibility to write music for the likes of Yo-Yo Ma and Joshua Bell one week then for Prince and Penn and Teller the next [1], one that is flexible and responsive to a wide variety of audiences and performers. This was on display in the recent production of his Pulitzer-nominated opera Death and the Powers by The Dallas Opera—even before I took my seat. Shortly after entering the Winspear Opera House, I noticed a group of people crowding around a simple metal chair with several sensors arranged in a semicircle behind it and flanked by what appeared to be two outsized lightsabers. Acting as a sort of a theremin for the torso, patrons were invited to sit in the chair and shimmy to their hearts’ content while the chair responded to their movements. Used as the focal point of Machover’s Brain Opera and developed initially as part of the Media/Medium project with Penn and Teller, this shiny new version of the Sensor Chair was built by Machover and Elena Jessop specifically as a catalyst for the production. It was quite popular and served as a gentle introduction to the technology as soon as one entered the hall.

There are robots in Death and the Powers, a 90-minute, one-act opera, and they are called Operabots. Perhaps to accentuate the difference between them and the humans who eventually join them on stage, their design is decidedly un-anthropomorphic. Think R2-D2, not C3PO, with one slight nod to human form in the inverted triangle that could be taken for a head. Operating independently and scooting around at various points in the evening, a quartet of these guys sat quietly at center stage as the work began. When they came to life, they announced that they would be re-enacting a drama left to them by their human predecessors, and in doing so they hoped to gain a deeper understanding of human existence through an examination of the concept of death. Accompanying their introductory material (which was voiced in the most stock ’50s nasally, monotone, robot voice you could possibly imagine [2]) were stylized computer sounds which swirled around the audience and read initially a bit more like sound design than music. My first impression was that both the robot voices and the opening audio were a bit dated, but on reflection I think that the use of those “on the nose” sounds served really well to both separate the human from the robot and to set the stage in the clearest possible way for the sci-fi to come. 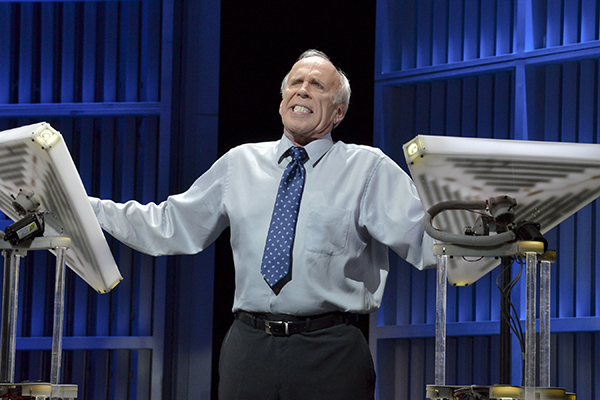 Robert Orth played the part of Simon Powers, a one percenter of the highest order who, as he is approaching the end of his life, has his consciousness downloaded into “The System,” a computer mainframe that will allow him to live forever. Joining him is his daughter Miranda, his third wife Evvy, and his protégé Nicholas, who as a child was rescued by Powers from an orphanage for disabled children. A set of strobe lights aimed at the audience masked the replacement of the robots with human counterparts, as three huge walls served as an ever-changing backdrop to the events. The walls were actually three-sided structures, each one able to rotate and move around to reveal what amounted to large video screens. The “screens” were actually made of dozens of vertical lights in an 8×20 grid which at times showed a variety of shifting patterns, but which were able to display a fine enough resolution to show faces, principally Powers once his transition to The System was made.

Orth’s portrayal of Powers was just thunderous; a stomping, garish, wonderfully obnoxious character who served as a perfect counterpoint to Joélle Harvey’s earnest Miranda. Once inside The System, his solo describing the transition was particularly compelling, though it’s a challenge to have that solo without the singer onstage. This was one of the instances in which Orth’s face does not materialize on the screen, so his work was really cut out for him. Running the gamut from bellowing bombast to a gentle nostalgia for his past, his performance here was even more impressive in that it occurred without his physical presence. Patricia Riley’s Evvy was engaging throughout, but never more so than in her duet with her disembodied husband. What begins as an innocent reminiscence about their first date develops into a full-fledged erotic encounter, one that Riley was able to communicate in every aspect of her performance without going full-Miley. Hal Cazalet’s Nicholas really came alive in the fifth scene while in the lab working with the robots. His retelling of Powers as his personal savior is passionate, as he notes that the prosthetic arm he has built is “post-organic,” a sort of preliminary version of Powers’ transformation. Powers financial standing is on par with many countries, and his exit from human affairs has left a tremendous void in the world. As such, all has gone to hell in a handbasket. A visit from the The Administration, The United Nations, and The United Way (played by Tom McNichols, David Kravitz, and Frank Kelley, respectively) provides comic relief, with Kelley’s piercing histrionics a wonderful foil to McNichols’s booming bass.
In a production with so many strong singers and performances, it was in the final scene where Harvey’s Miranda stole the show. Unable to follow Evvy into the world of The System, she is torn between her love for her father and her love of conventional human life. The 99 percent arrive as The Miseries, all of humanity living in a world turned upside down by the turmoil that occurred in the wake of Powers’s retreat from the world. Having escaped their grip, Miranda confronts Powers who continues to try to convince her that entering The System is the only option for the future of humanity. Miranda rejects this notion, repeating the word “Live, live, live!” as the orchestra ascends to a final climax. 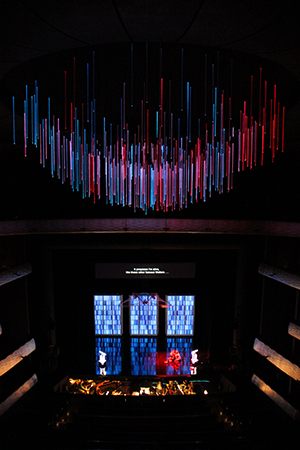 It’s not surprising that in a world where the line between human and robot is crossed, the music has a similar dichotomy. Nicole Paiement, artistic director of Opera Parallèle in San Francisco, returned to Dallas to lead her second TDO production, having done Peter Maxwell Davies’s The Lighthouse in 2012. Paiement and the orchestra not only handled everything Machover’s score threw at them, but did it while being surrounded and occasionally overwhelmed by all manner of electronic audio. And that audio was not fully confined to the hall in Dallas. Simulcasts of opera productions are nothing new, but Machover and a team from the MIT Media Lab developed an iPhone app which allowed patrons at satellite sites to receive secondary audio and video content coincident with the performance in Dallas, as well as the ability to control the Moody Foundation Chandelier, a huge structure with dozens of plexiglass tubes that descend from and contract into the ceiling.

Interactive, robot, remote simulcast, lightsaber, iPhone, Sensor Chair: the word cloud for this piece has everything a 21st-century opera could ask for.
I, for one, welcome our Operabot overlords.

1. This may not be an accurate timeline.

2. Seriously, take a second and do a robot voice. That’s the one I heard.