Kamala Sankaram: Being One with the Performance

Like many music makers of her generation, Kamala Sankaram creates and performs work which is an amalgamation of a wide range of musical traditions. But at the root of everything she does, there is usually a strong sense of narrative. Most recently, she took on the most vaunted form of “dramma per musica”—opera—with Thumbprint, which was one of the highlights of the 2014 Prototype Festival.

Video footage filmed by Spencer McCormick, edited by Molly Sheridan.
Like many music makers of her generation, Kamala Sankaram creates and performs work which is an amalgamation of a wide range of musical traditions. But at the root of everything she does, there is usually a strong sense of drama.  This narrative tendency has taken a variety of forms: it could be a chamber music piece that includes a theatrical component, like her flute and violin duo Slam or Bruja-Ha! for horns, strings and drumkit,  a wonderfully loopy score for Signe Baumane’s award-winning animated film Dentist, or cabaret-style indie-pop meets Yma Sumac gigs in clubs with her band Bombay Rickey in which the individual songs’ narrative arcs are exploited for maximum impact.

Most recently, she took on the most vaunted form of “dramma per musica”—opera—with Thumbprint, which was one of the highlights of the 2014 Prototype Festival. But both Sankaram and her collaborator, librettist Susan Yankowitz, wanted to create an opera which countered the ubiquitous female stereotypes within the genre—femme fatales or women who are ruined and ultimately die. Musicologist Carolyn Abbate’s 1991 book Unsung Voices: Opera and Musical Narrative in the Nineteenth Century had a profound impact on Sankaram when she first read it as did the real life story of a Pakistani woman named Mukhtar Ma’i. Mukhtar survived a gang rape and was the first such victim to file charges against her assailants; traditionally women so assaulted became outcasts, but she went on to found a school for women and is now an internationally prominent human rights activist. In Mukhtar’s inspirational transformation, Sankaram found the ideal fit for a new gender paradigm for opera:

We celebrate the submissive woman in opera. The tendency is that if the woman’s voice is too strong, we have to quiet it. Lulu has to die. Medea has to die. So it was really important for Susan and for me to show this woman who becomes very powerful in the classic sense of the operatic tradition. In the beginning of the show, her vocal part is contained to just the middle of the voice. It isn’t until she makes her decision [to report the rape] that she starts singing the more coloratura passages with higher notes; that was very deliberate.

Sankaram, however, is quick to point out that Thumbprint is about much more than that gang rape and despite the media’s recent focus on similar horrific incidents throughout the Indian subcontinent, that part of the world does not have a monopoly on violence toward women.

All of the Indian and Pakistani people who saw it thanked me first of all for being culturally sensitive but also for telling the story in a way that was moving for them and accessible to them. But this is not a piece about Pakistan, or a piece about Muslims or even, at its heart, a piece about rape. This is about Mukhtar’s experience and how it transforms her from someone who doesn’t have a voice to someone who has become a global force for women’s rights. That was something that was really important to me, that if people from that part of the world came to the show that they would not feel that I was wagging a finger at them or that Susan and I were saying, “Oh, this is a problem only among illiterate Muslims.” If you look at America, we’re not that different. Colleges don’t tend to go after football stars who have been accused of rape until after they have graduated and are no longer useful. So you have all of these girls who are doing everything they’re supposed to do: they do the rape kit, they go to the police. And still, nothing happens. So it’s not that we’re so different from India and Pakistan; we have our own culture that needs to have the silence broken around it.

Sankaram is clearly extremely aware of the power of opera to relate socially conscious stories to an audience and in Thumbprint she harnessed that power for maximum emotional impact.  While she was initially more inclined toward writing for musical theatre, that medium’s reliance on transitioning between songs and spoken dialogue began to feel somewhat formulaic and artistically constricted. Opera, on the other hand, seemed a more open-ended format.  However, she is fully aware that the works she wants to create rely on “being able to shift genre very quickly,” something which does not exactly sit comfortably with most opera companies and the singers who perform the canonical operatic works of the standard repertoire. 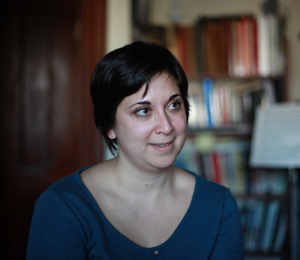 In fact, finding singers who are willing to take Sankaram’s idiosyncratic musical journey has not always been easy. In her earlier, less conventionally operatic music theatre pieces, she has usually performed the lead role herself since she loves performing and can easily navigate between pop, jazz, rock, world music, and even Western classical singing techniques. When people who have heard her perform with her band Bombay Rickey ask if she’s classically trained, she shrugs her shoulders and points out “how else could I get those high Fs?” While Thumbprint didn’t require the same amount of musical multitasking as some of her other projects, since she wanted to have an entirely South Asian cast and the singers must navigate some Indian classical vocal techniques as well as Western ones, she found herself in the lead once again. As she puts it, Thumbprint is “still not ‘opera-y opera.’ I think of opera-y opera as something that is very straight-forwardly in the Western classical tradition and doesn’t really waver from that technique of singing.”

At the same time that she is immersed in her own multifaceted creative projects, Kamala Sankaram actively sings music by other composers as well—among them Anthony Braxton, Corey Dargel, Philip Glass, Fred Ho, Phil Kline, David T. Little, Matthew Marks, Tristan Perich, and John Zorn—effortlessly navigating material that could be completely notated, completely improvised, and anything in between. But she acknowledges something that is particularly satisfying about performing her own work:

There is something really satisfying about performing your own music, particularly when you’re singing, because it’s embodied on a kind of molecular level and so you’re one with the performance in a way that you’re not always when you’re singing someone else’s music. It can become like that over time, but unfortunately in new music we don’t often get the chance to perform things enough for it to really evolve to that place.