The hypnotic repetitiveness of the first movement, the introspective quality of the second, and the visceral, athletic elements of the third all begged to be let loose, to be performed and experienced in a venue as big as the music.

Glenn Kotche and John Luther Adams’s collaborative relationship took root several years ago in Alaska. While on tour with the rock band Wilco,[1] Kotche rang up Adams and suggested dinner, and this initial meeting lead to a friendship as well as a collaboration on Adams’s newest work, Ilimaq. Though Kotche is best known for the Wilco gig, he is no stranger to the world of new music. He has collaborated with eighth blackbird and has been commissioned by the Kronos Quartet, the Bang on a Can All-Stars, and So Percussion among others. On the other side, Adams has a rock band background as well, so the two already had a great deal in common before that first dinner. 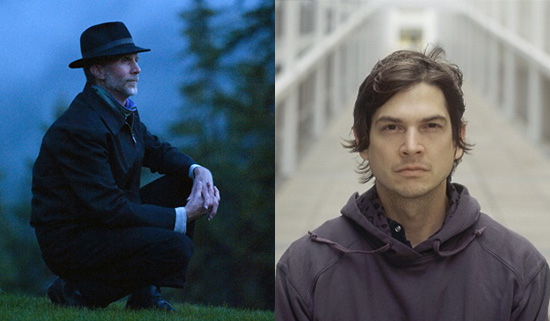 In true rock and roll fashion, the headliner [2] required an opening act, and On Fillmore, featuring Kotche on percussion and Darin Gray on bass, played just that role. Dovetailing with the pre-concert audience patter, bells began to peal at irregular intervals through antiphonally positioned speakers in the McCullough Theater on the campus of UT Austin. Also in keeping with rock and roll tradition, it was really loud and served eventually to transition most of the crowd from their how-do-you-do’s into full concert mode. Any stragglers were wrangled into place by bassist Darin Gray’s entrance. Looking a bit like a cross between a Stop Making Sense-era David Byrne and Tom Waits at his most junk-kit gravelly, Gray walked from the side of the room across (and above) the audience’s chairs armed with a variety of noise makers. Gray’s duck calls, whistles, clappers, and static generators (the last of these likely one of the wind gadgets overblown like crazy, making me occasionally yearn for the quiet peace of the antiphonal bells which were actually drowned out once or twice…) had an organic, natural quality and acted as an appropriate precedent to the Adams. Gray eventually made his way to the stage to join Kotche in a series of tunes peppered with reverb and other effects. Listening to two seasoned veterans lock together is always a thing of beauty, and Gray and Kotche delivered the goods; largely simple grooves and bass lines that took the listener from rock show to slightly surreal art presentation and back again. The latter description was delivered via the occasional noisemaker and the use of orchestral percussion (glockenspiel and crotales in particular) which, when used along with the insistent bass lines, obligated me to make the note, “Tom Waits Christmas” with a big smile next to it. It was fun, well played, and a great warm up for the Adams.

The second half of the concert was dedicated to the 45-minute Texas Performing Arts commission Ilimaq. The three-movement work was divided into three instrumental groupings on the stage: bass drum, cymbals/gongs, and drum kit. The first movement was in essence an extended bass drum roll, but eventually moved listeners away from the individual sound events and immersed them in a larger texture removed from time. Starting at a modest volume, the roll began to echo through the speakers placed around the hall. Kotche accelerated, decelerated, crescendoed, and decrescendoed throughout, but these small-scale changes were less important than the overall effect, which was that of a hypnotic thrumming. Despite the fact that I was listening to someone beat the hell out of a bass drum, I honestly felt like I could fall asleep in the middle of the whole thing. This was not out of boredom, however; I think that Adams was actually able to tap into the whole shaman/hypnotic thing and it was really quite effective. Adams creates the sense of “really big space” (and McCullough is not particularly expansive) in many of his works, and the opening movement of Ilimaq is no exception.

In the second movement, Kotche moved to a set of cymbals and gongs. Slow rolls played on crash cymbals were barely perceptible and came across like small waves crashing. The use of soft mallets made for little or no attack, and presented a great contrast to the visceral and constant attacks of the roll(s) in the first movement. Adams talks about creating an “aura” for the piece, an electronic background texture which reads/sounds like a bit like an ambient synth bed over which the percussion rides. This aura swirled around us through the speaker system, at times coming to the fore, but for the most part playing second fiddle to the percussion. This “all rounded with no edges/attacks” quality took a turn as the piece progressed, and more aggressive rolls resulted in the bite of the cymbal becoming all edge. This section was brief, however, and with a strike on the bell of the cymbal the movement ended.

The final movement saw Kotche move to a large drum kit positioned in the center of the stage. Armed with eight toms, eight cymbals, and two kick drums, Kotche seemed poised to play any number of epic rock drum solos, and Adams finale didn’t land far from that mark. Huge rolls, this time more akin to rock drum fills played across the kit, were punctuated with cymbal hits. Patterns of increasing and decreasing rhythmic values gave shape to the phrases, but any evaluation of the finer points and proportions is probably missing the point. This was about energy, movement, and frankly, sheer power, and Kotche gave it everything he had. I don’t think I heard a single individual who didn’t have something to say about the endurance required to play either of the outer movements, much less both of them. As the lightning and the thunder subsided, the bowing of a small gong signaled the end of the work.

Adams was in town for several days and spoke at two or three locations on campus about the work and the collaboration that took place. In one of these talks he spoke about writing music that embodies the out-of-doors as well as writing music that actually requires performance outside; music that should not be played indoors at all. Ilimaq could well be a harbinger of things to come, and not for the volume level alone. The hypnotic repetitiveness of the first movement, the introspective quality of the second, and the visceral, athletic elements of the third all begged to be let loose, to be performed and experienced in a venue as big as the music, and Adams’s great outdoors would be the perfect place for the next rendition of this work.

1. I know I’m getting old when instead of saying “Wilco” I say “The Rock Band Wilco”