It’s Music Because I Can Hear It: 1960s Experimental Music Festivals

I went to graduate school to study the sounds of burning pianos and squeaky rubber dolls and trash can lids. This music made people think; this music provoked discussions, This music was gutsy and political and sometimes it even required us to reconsider our definition of music. 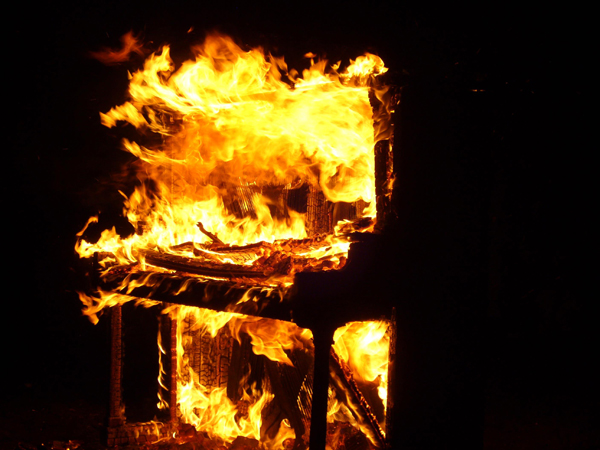 In the spring of my senior year of college, I burned a piano. Before you give in to the rising outrage—it was more than some college prank: I organized a performance of Annea Lockwood’s 1968 Piano Burning with the composer on hand to lead a pre-concert discussion. I found a “dead piano” as the score required—an upright that had been relegated to the laundry room of a dorm for years, a piano well beyond the concept of repair. I contacted the fire department for a permit; I advertised on posters around campus. I watched as it went up in flames. Hundreds of people crowded around the space we had cleared in the middle of the quad, talking, laughing; a few brave students were allowed early on to plunk out Beethoven and Joplin; I remember the sound of the balloons taped to the lid popping in the heat, the twang of strings breaking under pressure, the whoosh as the instrument was finally engulfed. “This is way cooler than I thought it would be,” a jock-type admitted. Just like that, I was hooked: this music made people think, this music provoked discussions, this music was gutsy and political and sometimes it even required us to reconsider our definition of music.

I went to graduate school to study the sounds of burning pianos and squeaky rubber dolls and trash can lids, scores that instruct the performer to “draw a straight line and follow it,” and realizations of that score involving hair dipped in ink and dragged across pure white paper. The experimental music of the 1960s was (is), to some, ridiculous (and maybe that’s part of its power); to others, it proclaims freedom from genre, border, and label. But the thing that draws me in the most? It was meant to be experienced—sometimes conceptually, sometimes interactively, never by just some small community of musicians, but always by everyone. To achieve this, our intrepid experimental heroes turned to the festival medium.

There’s something special about festivals. All of the musicians, composers and organizers coming together to say: “General public, this is what we are about.” And the audience members responding: “We hear what you’re doing, we’re trying to understand it, and we like it or we don’t.” A festival isn’t something that can just happen on a whim; even the lowest maintenance variety needs personnel, materials, space, some modicum of promotion; a festival is a concentrated effort to self-define and proclaim a particular set of artistic values. For experimental music—meant to be experienced by everyone, remember—festivals were part of the territory, and that was true in East Coast New York (of course) but also in West Coast San Francisco and Midwest Ann Arbor, and across the ocean to France, Germany, the Netherlands, and England. Wherever this extended family of musicians and composers went, they made themselves and their work known.

Here is this week’s example. Charlotte Moorman (famously known as The Topless Cellist) organized what eventually became known as the First Annual New York Avant Garde Festival in 1963. “We wanted for all these new people to see what we’re doing: it’s silly for us to play for all our friends, you know,” she told Harvey Matusow in an interview several years later. What were they doing? That first festival was a series of six concerts spread out over the course of a little more than two weeks, held at the venerable Judson Hall. The first concert was Frederic Rzewski’s American piano debut featuring music by Sylvano Busotti, Karlheinz Stockhausen, and Giuseppe Chiari. The next concert was a Toshi Ichiyanagi and John Cage double bill (apparently Cage’s Variations III, which involved amplifying the sound of drinking a glass of water, caused several patrons to complain of earaches). There was a chamber concert, an electronic music concert, a Moorman-Tudor concert, and an ensemble concert. Imagine Moorman’s pride as she looked over this extensive and varied program on opening night—the “friends” had made this happen. 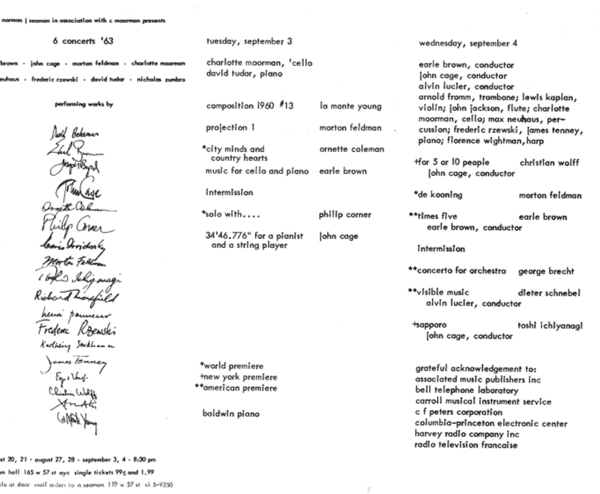 A flyer from the first New York Avant Garde Festival in 1963.

The “new people,” on the other hand, were—shall we say—less enthusiastic. Witness that very first concert in 1963. John Gruen of The New York Herald Tribune titled his review “Far Out Concert, Stupefying Boredom” and signed off with “avant-garde piano music is decidedly something to watch—it might even get worse.” He wasn’t alone in his evaluation: Harold Schonberg of the The New York Times left us with this gem: “An evaluation of the work [Chiari’s Teatrino]? Don’t be silly, man.”

The first three years of the festival were held in a concert hall and featured the musical works of all sorts of known composers including Cage, Morton Feldman, and Edgard Varèse. Looking back, we might say it was a fairly traditional concert-going experience, and yet… Year two, October 1964: Carl P. Sigmon’s “Festival of the Avant Garde” for Musical America: “Time and again the potential fun quickly turned to tedium….One could only wonder why the youthful audiences cheered loudly….” Year Three, September 1965: Leighton Kerner reviewing a night of action music by Nam June Paik for the The Village Voice: “Take, for example, the opening night which aged some of us considerably.” So bitter, so soon. Little did the critics know what they were in for.

By year four, Moorman had radically redesigned the format of this music festival. Held over 18 hours in Central Park, the works of 77 artists from 14 countries were performed simultaneously. Picture this: Ed Summerlin and Don Heckman improvising a saxophone duet early in the morning across the Children’s Pond; Joe Jones riding his Musical Bike; Jim McWilliams staging his Picnic (in which the point was to eat as many hot dogs as possible, even if that meant regurgitating what you had already eaten); Moorman herself realizing Nam June Paik’s Zen Smiles by passing out five thousand pennies and five thousand smiles, one of each to each audience member; Dick Higgins, sitting in a lawn-chair, dressed in a striped tunic, allowing his wife to apply shaving cream to his bald pate in a performance of Danger Music No. 2. This is all faithfully reported in Dan Sullivan and Richard F. Shepard’s September 10, 1966 New York Times article “The Avant-Garde Day in Park Goes On and On.” The reporters ask at one point if it is really music. “‘It’s music,’ Mr. Higgins said, ‘because I can hear it. To the audience, of course, it’s theater.’” Shepard and Sullivan don’t argue; in fact, they give up opinion entirely in favor of description, laced with a healthy dose of skepticism. “[There were] no cogent answers from anyone,” they say at one point. Then there’s my personal favorite subheading of all time, “Clapping Hands – to Ears.” And finally, the last word of the piece: “Nothing was settled.”

After all was said and done, the New York Avant Garde Festival ran almost-consecutively for fifteen years from 1963 to 1980 (excluding three years when Moorman was too sick to organize it). At its peak, it featured the works of more than 650 artists and attracted audiences of a hundred thousand-plus at a time in locations including the John F. Kennedy Staten Island Ferryboat (1967, “Music: Lost at Sea” read one headline in the The Village Voice), the 67th Regiment Armory (1971), and even the Charles River in Cambridge, Massachusetts (1980). As composers, as performers, as audience members, as passersby, Charlotte Moorman made sure everyone had the opportunity to experience experimental music.

So there it is, a history of the early days of the New York Avant Garde Festival, a bit of proof that festivals and experimental music go together like ramalamalama. In a nutshell, this was crazy music—was it even music?—with festivals that kept getting bigger, and the tastemakers (represented by the newspaper critics) thought it was outré and boring. Done and done. But there is a catch: what I’ve presented to you today as “the New York Avant Garde Festival”—a description of events, documented opinions, all incontrovertible fact—is only what I’ve found in advance press and reviews. It’s not the whole story by any means.

We can never have every detail of any given event; my version differs from yours, and what he saw from the corner won’t be quite the same as what she experienced from stage-center. Plus, memories are faulty and colored by attitude and context. We can’t really blame the critics for their generally less-than-enthused reviews because, let’s face it, these guys (and they were mostly guys) worked for major newspapers in the capacity of music critics. They usually spent their nights seated in a hall on red plush velvet, listening to Bach and Beethoven and writing about whether or not a particular performance did justice to the composer’s vision, not about whether or not a particular performance might be considered music. Regardless of whether these experimental music festivals were objectively “good” or “bad,” critics had a stake in the musical canon (which the New York Avant Garde Festival most certainly was not a part of) and it comes across in their reviews.

History is written by those who write; the critics were writers. What we sometimes forget in our pursuit of facts immortalized in print, waiting for us to scoop up and rewrite into our articles and books, is that history is made by all sorts of people—from the creative composers to the friends of friends who lend their amps in a last minute Situation. What is written isn’t the only version of history, and the critics weren’t the only people at those festivals. There were organizers, there were performers, there were composers—all, one would have to imagine, more committed to the idea of experimental festivals than the critics. And there were audience members—sometimes willing, sometimes just in the right place at the right time (or the wrong place at the wrong time, no judgment).

And so here we are fifty years later, and I have limited options to recover history: I can head to the archives (if there are archives), I can talk to the participants (if I can find them—hello out there?), or I can turn to the microfilms and the internet and pull up the newspaper reviews and the advance press—the easily accessed, written records of these historical events. That last is exactly what I did for you today. It’s not a bad thing (it’s often all we have to go on), but you deserve more and in the next few weeks I’ll give you first-hand accounts from a variety of festival participants. It’s the only way we can even begin to see the whole picture. After all, if I hadn’t told you at the beginning of this article about Piano Burning in my own words from my own experience, all you might have had to go on was this, from the comments section of a review on a local blog: “MHMMMM just wondering if part of our added sales tax for ‘the arts’ paid for this?????” 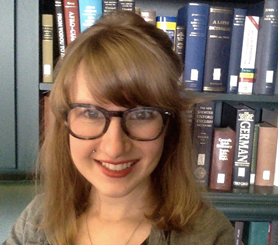 Caitlin Schmid is a graduate student in Historical Musicology at Harvard University. Her interests include American music, sound art, feminist approaches to musicology, and (of course) 1960s experimental music festivals. She’s particularly interested in your experience of these festivals – what do you remember? Post your memories in the comments below.