It’s a Floor Wax and a Dessert Topping

I won’t rehash any discussions about the technical differences between musicals and operas, but I am interested in exploring preconceived notions held by those working in both genres and the effect they have on composing for the theater. 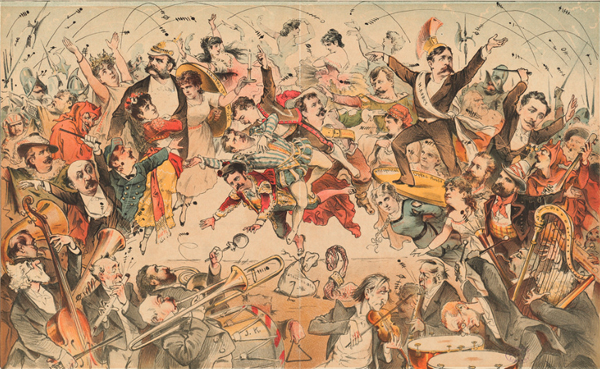 The operatic war in N. Y., a lithographic print from the 1880s from the archives of the Boston Library, depicting a clash between the Academy of Music and the Metropolitan Opera, with Henry E. Abbey, opera singers, conductors, and orchestras; some of the identified figures include Marcella Sembrich, Sofia Scalchi, Galassi, Trebelli, Roberto Stagno, Mirabelli, Campanini, and Col. Mapleson. (The image is in the public domain and has been made available by the Boston Library on Flickr.)

Every time I encounter an argument about whether Porgy and Bess is a musical or an opera, I am reminded of this.

I won’t rehash any discussions about the technical differences between musicals and operas here. But I am interested in exploring preconceived notions held by those working in both genres and the effect they have on composing for the theater. For example:

Opera is inaccessible, outdated, and made for and by snobs.

A few years ago, I participated in a lab for new music theater. One colleague, who writes musicals exclusively, used “Pompous Mock-Opera” as a tempo marking above a declamatory passage. There was a whole values system inherent in his tempo marking, and the leader of the workshop picked up on it. “Why pompous?” he asked. “Because, you know, it’s opera,” the writer replied.

This is an opera. So is this… And this… Floor wax? Dessert topping?

A few weeks ago, after hearing some of my songs, a commercial theater producer contacted me and asked what I am working on now. I included an opera on my list. Response: crickets.

Musical theater is full of vapid sentimentality and relentless optimism conveyed by too many jazz hands.

But what about this…

Or this… Let us also not forget the dark undercurrents in most of the musicals by those great purveyors of cock-eyed optimism, Rodgers and Hammerstein.

This once ran on Broadway, as did this. But both works were billed as operas. Floor wax? Dessert topping?

Yet opera and orchestra musicians continue to groan when I inquire about any scheduled musical theater-oriented performances: Broadway-oriented pops concerts, or even whole musicals on an opera company’s season. Musical theater is ubiquitous in the “serious music” world, yet show tunes are beneath them.

Recently I had a reading of that opera-in-progress, followed by a feedback session with experts for whom I have the utmost respect. There are elements of what we typically think of as musical theater in the piece. Accordingly, I was told that the heroine must not die in the end because: a) a musical requires a redemptive finale; b) it was funny at the beginning and should continue to be funny throughout; c) there are children present onstage and it would no longer be family-friendly. I was extremely confused by these reactions because I have only ever thought of this work as an opera. Has no heroine ever died in an opera? Spoiler alert: it is the children’s chorus who kills her. It is about the dangers of obsession and the fatal effects of a culture of pervasive casual cruelty. It was never meant to be a family-friendly evening. To add to the confusion, I was later told never to mention its musical theater influences while pitching it.

It astonishes me that, a good 80 years after Porgy and Bess opened, these rigid notions about overblown, tragic opera vs. happy, hopeful musical theater endure. (Indeed, a few years ago that very show was retooled to entice an audience more likely to attend Broadway musicals.) There are seemingly endless precedents for “crossover” composing; it is not new or revolutionary to write a piece in one style that constantly nods toward the other. The skill sets for writing musicals and operas differ somewhat, but there is an awful lot of overlap, and the goal is ultimately the same: to provide a rich theatrical experience by presenting a compelling story (which is not to say linear narrative) through vocal/physical performance (song and dance, if you must). The challenges of craft are the same for both, too. It is often lamented that there are no compelling lyrics or libretti today in either arena. (There are as many dreadful examples supporting this complaint as there are magnificent examples refuting it.) And composers of both musicals and operas must strive to write music that is an engine supporting the text rather than obscuring it. History has set the bar very high for all of us, even if that’s not evident in some of what actually makes it to the stage.

Bearing all of this in mind, I’ve noticed that when I sit down to write, a sort of “opera switch” goes on for me. If I’m writing operatic material as opposed to a musical theater song, I suddenly give myself permission to write libretto in free verse, and I’m no longer bound by song form (unless I choose to be) or the often-limited vocal ranges of musical theater singing (more about this in a subsequent post). Unfortunately, I also tend to don this cloak of self-consciousness that says, “This Must Sound Like an Opera.” And when I wear this cloak, I invariably end up tossing out a lot of what I write. Because what does an opera sound like anyway? More high notes? More long notes? More complex rhythms? More repeated text? More tone clusters? More erratic intervals? None of this is remotely helpful. I find that when I write what I think other people expect to hear in an opera, I end up with a wash of notes for notes’ sake and little that illuminates the urgency of the libretto. So I must scrap it and ask instead: Who is the character? What is the moment? Back to the basic Playwriting 101 questions!

There’s a character that shows up very late in my opera, and I struggled for a long time to figure out his sound. He is a goofy, easygoing exterminator who finds himself in the middle of a tightly wound dysfunctional family’s fight. It wasn’t until The Beatles’ “Come Together” popped into my head that I understood what he needed to do. Using that groove as an inspiration, I came up with a silly, funky setting of what originally read as very earnest and straightforward on the page. I’m certainly not saying that ripping off great popular songs is always the solution, and it wasn’t something I ever planned to include. Does it “sound like opera”? Probably not. But it was right for the moment, and it turned out to be one of the more successful arias. People wanted more of him, and more surprising moments like that.

But it’s not only in the writing itself that the divide is evident. Without necessarily meaning to, I have simultaneously established myself as a dark, angry musical theater writer and a kooky, funny opera composer; in order to survive, I know I must find a way to follow both paths. (Contemporary opera is never funny, the experts say, and people are desperate for that to change. Again, I can think of a host of examples pro and con.) But I have been advised to eliminate references to musical theater from my applications for residencies and awards—to hide a significant portion of my education and my body of work for fear of not being taken seriously. (Make no mistake: if I were truly afraid of not being taken seriously, I would never get anything done.) I frequently get mixed up about how I should apply in the first place. Which category do I choose? Composition, where the frame of reference may be George Crumb? Theater, where the frame of reference may be Jonathan Larson? I don’t write like either of those guys. There seems to be no right choice in these situations—I can only continue to second-guess. Heck, there are residencies and awards tailored only to one genre or the other. Where do I focus my limited time and energy in applying for these opportunities to ensure that I can continue composing anything at all?

It would be naïve to ignore the important practical reasons why musicals and operas don’t completely fit under the same roof. Artistic concerns and historical traditions—which are significant—aside, it is also partially a matter of packaging. Producers understand that audiences looking for an opera will have different expectations than those seeking a musical, and they have to signal accordingly, particularly when tickets can cost hundreds of dollars. I only wish that the necessity of proper packaging would not continue to reinforce and deepen our collective need to choose between creating and/or supporting only a floor wax or a dessert topping. The world could use more Shimmer! 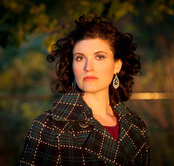