It Takes a Village: Daron Hagen’s A Woman in Morocco

No matter how you slice it, overseeing the development of an opera seems a lot like marshaling forces for the invasion of a small country. Hagen’s recently performed (a fully-staged, “pre-professional” workshop) full-length “opera noir,” A Woman in Morocco is no exception. 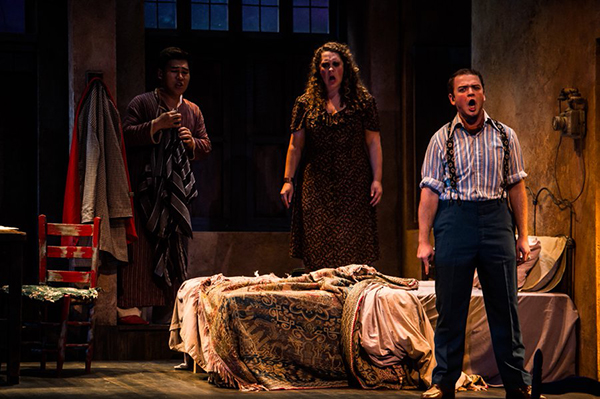 Soonchan Kwon, Austin Bradley, and Natalie Cummings in A Woman In Morocco
Photos by Nathan Russell (except where indicated)

Many imagine a lone composer toiling away to produce a mammoth work. The truth is subtler. While opera is possibly the most collaborative of the arts, “an opera composer must be able to build consensus for his vision among strong people with visions of their own in order to create a viable theatrical work,” asserts composer Daron Hagen. “But he has to also know how, at all costs, to keep everyone on the creative team focused on his vision, and not theirs.”

No matter how you slice it, overseeing the development of an opera seems a lot like marshaling forces for the invasion of a small country. Hagen’s recently performed (a fully-staged, “pre-professional” workshop) full-length “opera noir,” A Woman in Morocco is no exception. The preparatory planning and writing stages alone were staggering and were followed by frank and brutal revisions. At one point during production in Austin, Hagen’s Facebook status read: “Thrilled to have trimmed five minutes from the first act.” Asked why he had over-written, Hagen responded, “It wasn’t over-written for the staging I had in mind. But I’m the first to cut linking material for scene changes that were not needed for a single set.” 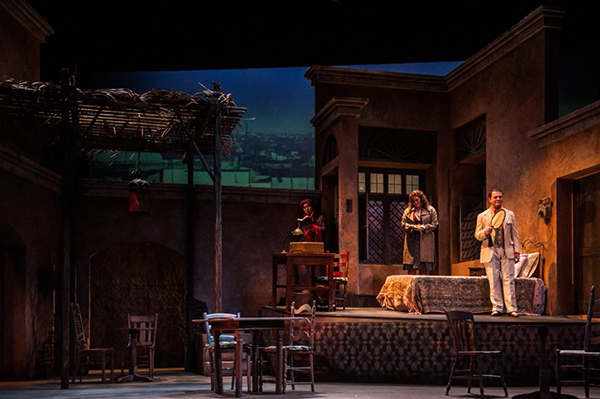 Based on the play by Barbara Grecki and following on the heels of their previous collaboration New York Stories, Hagen began adapting Barbara Grecki’s play into libretto form in the fall of 2012, during the premiere production of his Little Nemo in Slumberland by Sarasota Opera. “I’d return to the hotel from staging rehearsals in which over a hundred children were singing about the purity of a world of dreams, order a pot of coffee from room service, and delve into the decadent nightmare world of Lizzy’s seduction, descent into drug addiction, and finally, her disappearance. It made for an agreeable sort of psychic whiplash.”
After Hagen went through several drafts of the libretto with Grecki, a table read directed by Alan Hicks, with actors at Center City Opera in Philadelphia, was arranged. More meetings between Hagen and Grecki yielded a “working draft” of the libretto, which Hagen shared selectively with interested artistic directors at opera companies around the country. “When you think about it, it makes a lot of sense to have people you trust ask questions prior to the first staging. Every director ignores to some extent (and should ignore, since practical concerns like the physical layout of the stage, costs, union rules, available personnel, even the number of lighting instruments, come into their decision-making process) what you’ve written in the score. One wants feedback not on a particular director’s staging but on the document. You’d perhaps be surprised by how many people think that what they are seeing on the stage is exactly what the composer intended. That’s not going to happen unless the composer directs it himself.” 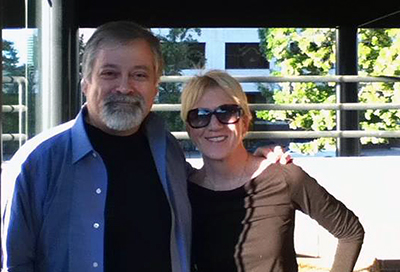 Over the course of three months, Hagen hammered out a first act vocal score, changing the libretto as he went along. This led to a first act workshop by Center City Opera. “Andrew Kurtz, the general and artistic director of Center City Opera, was kind enough to volunteer to give a workshop performance, with singers and piano, of whatever I was able to get done by around the end of the year,” Hagen explains. “I never listened to the tape, but I was all ears during the run-through itself, and I certainly incorporated dozens of tessitura shifts and prosody fixes that ‘popped’ during the process.”

Hagen spent the winter finishing the vocal score, and ploughed straight into orchestrating the piece. “I knew, going in, that I would be crafting the show for three different sorts of ensembles—a seven-player ‘agitprop’ group suitable for black box and ‘second stage’ performances, a ‘small house’ version with 12 players, and a ‘large house’ version with an orchestra enlarged to include Mozart-sized string sections. Since I did all three orchestrations simultaneously, a vocal score had to come first.” Hagen delivered the completed orchestrations a few days before the first orchestra rehearsal.

“When you think about it, the composer is the only person sitting at the table with every producing and creative partner. So, I needed to be very clear about what I needed to learn about the opera in Austin. I wasn’t worried about whether the piece was dramaturgically viable; I already knew that it was. The libretto had been workshopped and heavily revised, and I knew going in that I would be directing the thing down the road myself. My primary need, therefore, was to hear the orchestrations (I wanted to make a ‘chamber opera’ come across as a ‘grand’ opera) with young singers, and to check the viability of the ‘dramatic beats’ in the piece.”

More than a year after inception, the curtain was raised. However, as far as the development opera productions go you might say that this is still Act One for A Woman in Morocco, and it was the work at this stage that I saw produced at McCullough Theater. 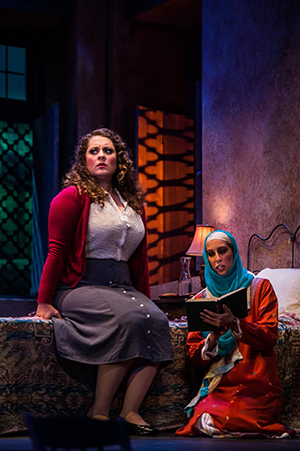 Set in a small run-down hotel in Morocco in the mid-1950s, the opera tells the story of a young, wide-eyed writer, Lizzy, whose involvement with Ahmed, a worker at the hotel, sets in motion a series of events which ripple out and impact all the characters in the opera. Of course this leads, in the spirit of great tragedies, to all sorts of pain, death, and misery. The best laid plans of any good tragedy play on our hope that, despite the dark inevitability of where things are headed, they will somehow work out, and Hagen deftly plays on this most human trait, laying a bright, airy opening framework echoing Lizzy’s initial naïve outlook. As the character’s backgrounds, desires, and motives are revealed (several quite deliciously as the opera unfolds), it is in the trios where Hagen’s writing shines in particular. The first act closes with one of the most effective of these trios in which fragments of the characters arias from earlier in the opera coalesce. Short, punchy phrases in Lizzy’s aria return and play among the long lines from Ahmed’s. A third line, sung by the hotel owner Teddy, seamlessly joins these parts and, despite tight turns and nested phrases, each line is clear and perfectly placed. This trio was preceded by a beautiful aria sung by Asilah, Ahmed’s wife, a character whose story arc becomes central to the opera. Rising fourths in the piano underpin the twisting melody, and an insistent pedal builds tension as we approach the aria’s climax. Following this she switches from third person to first person, revealing that she is singing about her own life. If you followed Breaking Bad, you probably thought things couldn’t get much worse for Hal and company than they had by somewhere around mid-season four, right? Then season five shows up, and all bets are off. I won’t reveal any more about the story of A Woman in Morocco here, but let’s just say that things don’t turn out much better for this cast of characters. If you’re not familiar with Breaking Bad, then I’ll direct you to any number of Shakespeare tragedies. It’s bad news folks.

Of course, without the singers it’s all academic and the performances were both musically and dramatically really quite strong. Natalie Cummings’s Lizzy was delicate and vulnerable, made all the more poignant as the dark events unfolded, while Soonchan Kwon’s Ahmed was strong, complex, and assured. Austin Bradley’s bigger-than-life Teddy was nicely contrasted by Samantha Leibowitz’s tortured Asilah. Conductor Kelly Kuo’s command was also particularly admirable, directing the orchestra and singers through the twists and turns of a fresh and quite involved score. Hagen traffics all but exclusively in acoustic tonality, so when I heard that electronic elements were involved in this production I was very interested to hear how he would approach it. Consisting of pre-recorded and digitally manipulated sounds, including those natural (rain and thunder) and human (ululations, vocal glissandi, and a jazz trio presented as a shortwave radio broadcast), each electronic addition was subtle and organic and added an extra dimension to the proceedings.


This show was part of the work’s initial test run. Hagen will incorporate some of the cuts suggested by stage director Robert DeSimone and conductor Kelly Kuo in the next production. He also intends to lengthen and develop the electro-acoustic elements for the black-box version, which he will stage direct for Kentucky Opera in October 2014 with Joey Mechavich conducting a crack chamber ensemble, as well as the culminating ‘large opera house’ premiere at Skylight Music Theatre, with Hagen directing and artistic director Viswa Subbaraman in the pit. 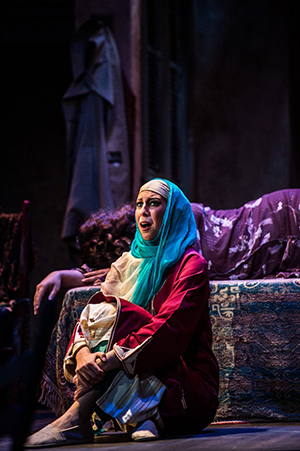 “The show is 95% there, now,” Hagen says, with evident relief. “It will sit on the back burner for a few months while I write the script, lyrics, and songs for a musical called I Hear America Singing, for Skylight’s second stage. Directing Singing for them is giving me an opportunity to immerse myself in the culture of the company that will ultimately premiere Morocco. More importantly, I will be getting to know and work with the creative team that Barbara and I will be handing our baby over to.”
In the world of opera production, these are Acts Two and Three, and while the vast majority of the work will remain the same, the changes that are made through these collaborations can make or break the opera in the long term. “Yeah, it’s a long haul,” Hagen says, “and a lot of people are taking a lot of creative and monetary risks in order to bring it to life. That’s always right there in my thinking.” And it’s worth remembering that these changes require more than a solitary composer with a bottle of India Ink, a piano, and an overactive imagination. It takes collaboration on a massive scale by a tremendous cast before and behind the scenes. It also takes time; time to write, re-write, present, revise, and then do it all again. This is opera, people, and it takes a village.