Is the Printed Circuit Board a Form of Musical Notation?

Is the printed circuit board a form of musical notation? And even if it isn’t, what can one glean from all those diodes, the cryptic copper lines, the tiny landscapes of circuitry?

This is the second in a short series of essays about how sound is inscribed.

A small box has arrived with the day’s mail. It’s cardboard, generic packaging, the address label clearly affixed atop a previous label. Inside the box is a small synthesizer module that I’ve purchased secondhand.

I open the box, unpeel the bubble wrap, and look at the tiny device, which is designed to connect with an extensive array of like-formatted modules. It’s about an inch wide on the front, with holes where patch cables will go in and knobs to control various aspects of its intended functionality. Directly behind that faceplate is a stack of electronic internal parts, all PCBs (printed circuit boards) and wires. In my office this little item will connect with about two dozen of its cousins, but before I plug in its power cable I look closely at the circuits, straining my eyes in the process.

I’m looking for, of all things, a bit of humor. 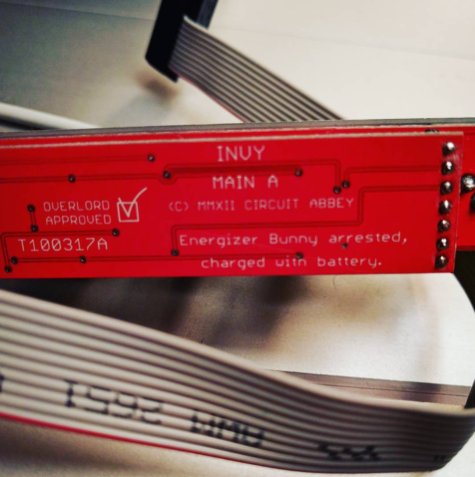 When I first started fiddling (for the first time since college) with synthesizer modules, back in mid-2014, I had a fully exposed starter rig into which I’d plug them. (I’ve since gotten a briefcase-like enclosure.) Even after they were hooked up—an oscillator here, a filter there, the naked power supply warm to the touch—I could freely view the interior workings. These consisted largely of PCBs, usually green or gray, their surfaces home to a mix of diodes, solder, and dozens of things I couldn’t begin to identify. Some looked like they came off an antiseptic assembly line, others like they’d been designed and manufactured in someone’s parents’ basement. 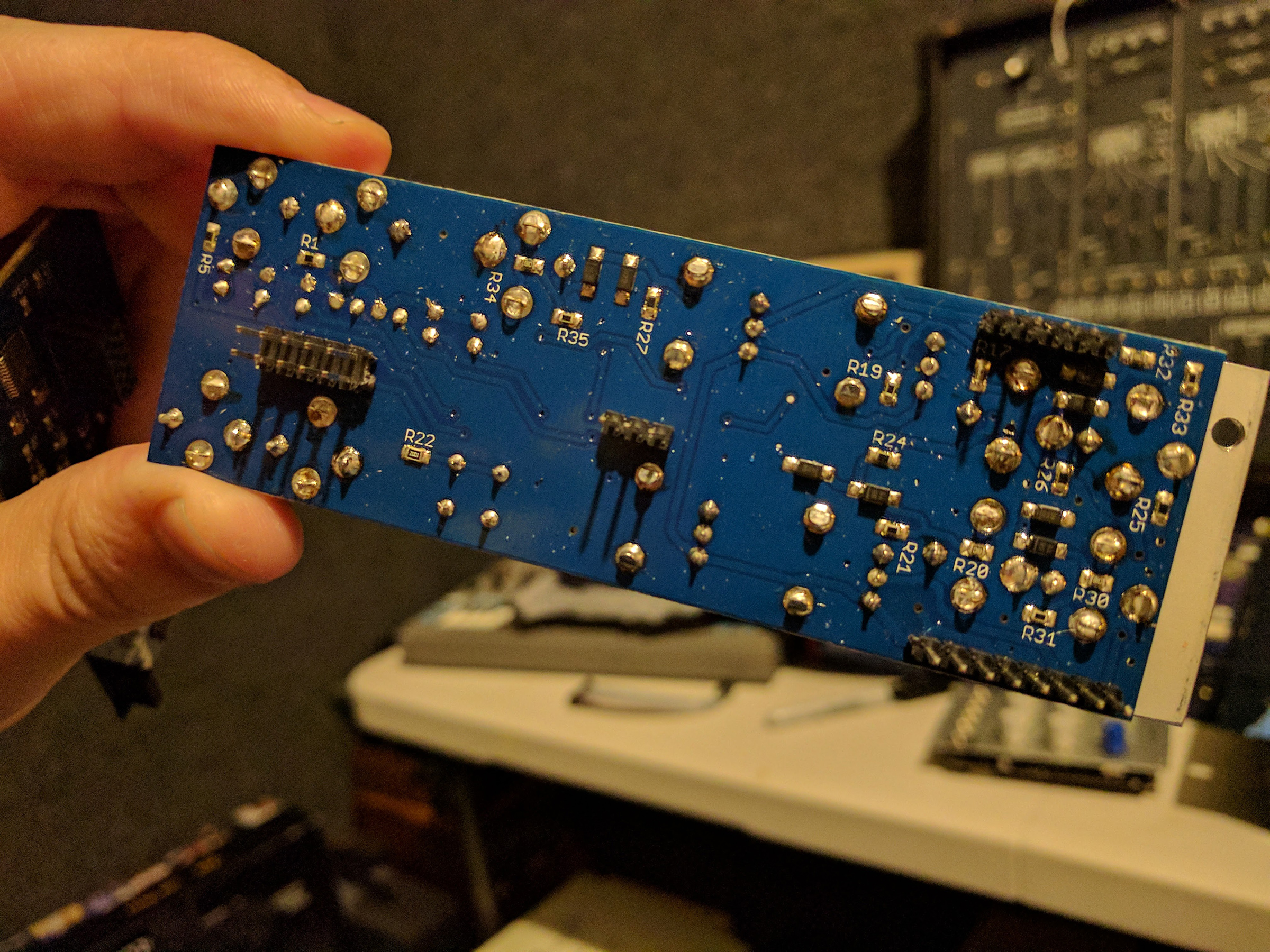 For a long time I couldn’t see the synthesizer forest for the module trees. It was all a blur of patch cables and buttons, switches and LEDs. I was also overly cautious, handling the items like one would an adorable newborn kitten with a congenital heart defect. As time passed, though, I gained some sense of fluency with the material in front of me: how to use a sample and hold module to get a random pattern out of a noise source, how to use an offset to set a waveform’s bottom level to something higher than zero volume, how to hook my synthesizer up to my laptop so I didn’t have to spends hundreds of dollars every time I wanted to try out a new synthesizer function.

Some modules have lovely design flourishes, bits of fantastic line art right there on the circuit board, so enticing it threatens to give “cyberpunk” a good name all over again.

In time I wasn’t plugging in my newly arrived modules so quickly. I was spending more time looking at them, admiring their structures, noting aspects unique to various individual companies. Some modules have lovely design flourishes, bits of fantastic line art right there on the circuit board, so enticing it threatens to give “cyberpunk” a good name all over again. Others have funny little phrases, puns on functionality, like where the power supply goes, or little axioms that both gently mock and encourage the beholder—Barbara Kruger by way of circuitry. This is what I now first look for when I unpack a new module.

Still, my fluency could only go so far without a tutor, so I reached out to a friend, Matt Holland. I met Matt years back just as he was starting studies at the University of California, Berkeley. He was getting a degree in electrical engineering and computer science—that’s one degree, he’s careful to point out. Matt graduated from Berkeley and went on to work at various companies; his most recent gig has been with Teenage Engineering, the boutique Stockholm-based company best known for its OP-1, a hand-held synthesizer whose exceptional design earned it a place on the shelves at the Museum of Modern Art. Matt, who recently moved back to California from Sweden, invited me to stop by a small studio space he shares south of Market Street in San Francisco, and schooled me in PCB literacy.

Matt understood what I was after. I was already learning how to use synthesizer modules. What I wanted to get better at now was to be able to “read” them. I explained that I was working on a series of investigations into how sound is inscribed—in writing, in code, and so forth—and thus I was especially keen for insights into how synthesizer modules’ sonic intents can be interpreted visually. In other words: Is the printed circuit board a form of musical notation? And even if it isn’t, what can one glean from all those diodes, the cryptic copper lines, the tiny landscapes of circuitry?

Is the printed circuit board a form of musical notation? And even if it isn’t, what can one glean from all those diodes, the cryptic copper lines, the tiny landscapes of circuitry?

Matt’s studio is a small museum of drum machines. He has the full run of the “X0X” Roland items, like the 808 Rhythm Composer and the 303 bass synthesizer. On one desk is the ARP 2600, which dates from the early 1970s. He bought it at a pawnshop in Los Angeles. If you’re into synthesizers, having a degree in electrical engineering can come in handy—you can get the items in disrepair, and then fix them. And if you have a degree in electrical engineering, being into synthesizers can come in handy—Matt has a side gig doing commissioned work to bring archaic equipment back to life. Right now this includes a Roland CR-68, the little brother to the CompuRhythm CR-78, whose innards are splayed on a table when I visit. It’s a bit like the scene at the eyeball workshop in Blade Runner, just less chilly. Matt points out how there are cables in the device’s enclosure that simply shouldn’t be there. Someone did aftermarket work on it once upon a time, and now he’s carefully investigating those efforts. Matt has been asked at times to return items to their original state (the synthesizer equivalent of the Early Music movement), but in this case he’s trying to repair the aftermarket changes in addition to the box’s foundational electronics. 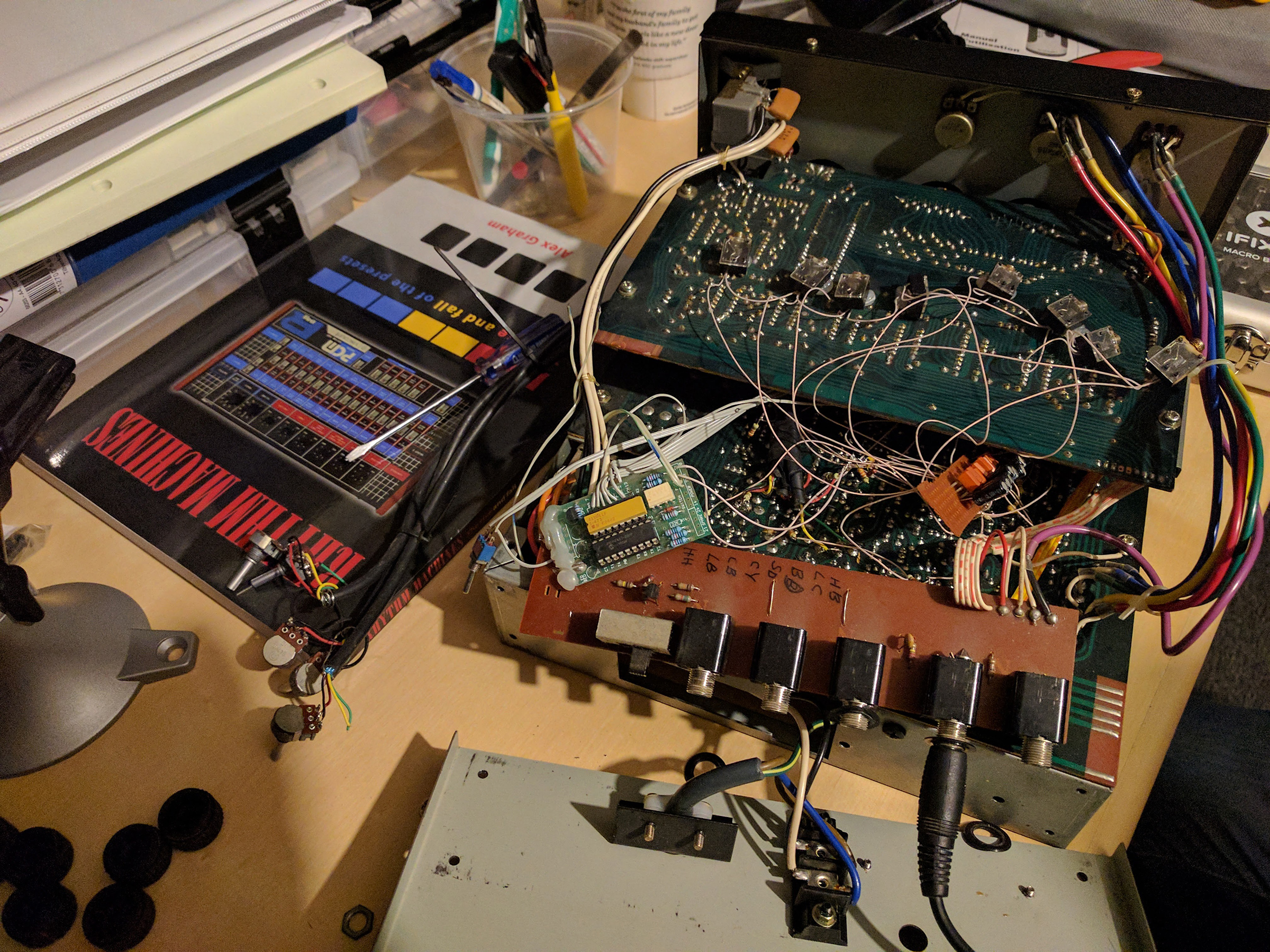 Matt has never been a purist. He got into synthesizers and electronics through circuit bending, which means taking existing circuits in existing devices—a Speak & Spell, an old Casio keyboard—and seeing what happens when you re-wire them. In his office now is a kids’ toy featuring all the U.S. presidents up to George W. Bush, and if you touch their faces they say things. Matt has tweaked the innards and added switches. He made it in 2006 during his first electrical-engineering internship, at the company OQO, an early portable-computing startup. Matt calls this device the Gang of 43.

Matt explains that the circuits of synthesizer modules as viewed on their PCBs can’t necessarily be read for their sonic content, though with experience and effort you can make educated guesses, in particular based on components’ relative proximity. In many ways, music-gadget PCBs are not distinguishable from those inside a cellphone or a microwave oven. There are key things to look for, though, such as what chips are present and what the inputs and outputs are, because audio-related jacks (MIDI, XLR, 1/4″) are rarely used in other fields.

That said, the PCB is not only readable; it is intended to be read.

Looking at the traces (the metal lines that connect aspects of the board) you can roughly gauge the generation of a board’s construction because new boards evidence the taut geometry of CAD design, whereas old boards were literally drawn by hand.

Most boards have writing on them. This is information to help the board assemblers. The code “C6,” for example, can be referenced in a schematic or BoM, bill of materials. There are standards to these, so even without a schematic you know that something is an integrated circuit if it starts with a U. 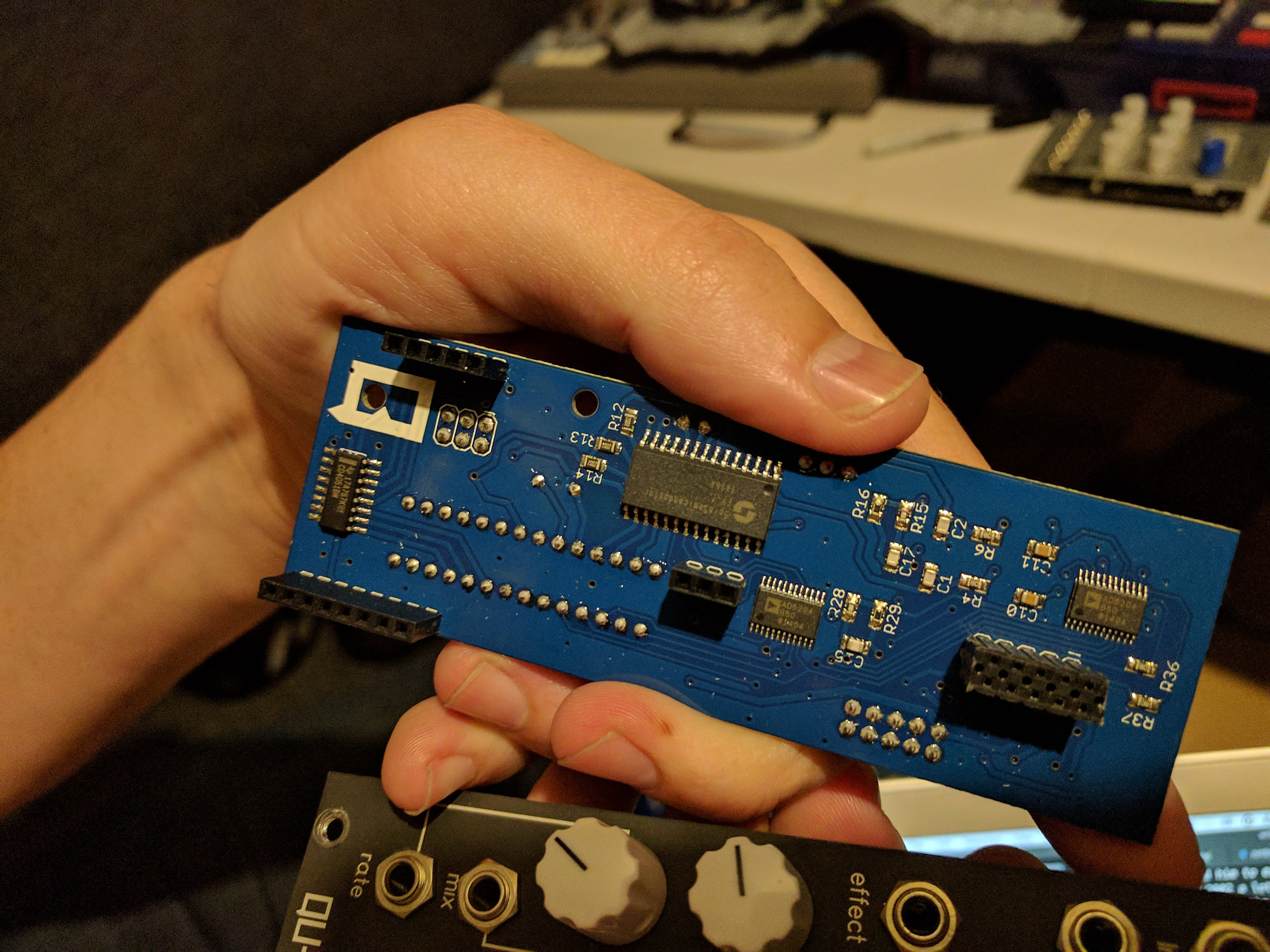 There are other signs of age. Modern modules will tend to have smaller versions of components that have seen iterative improvements over the years, engineering always tending toward miniaturization. Likewise, newer boards usually stack multiple PCBs more tightly, rather than running them perpendicular to the faceplate. (If you’ve watched the TV series Halt and Catch Fire, you’ll recall a moment of PCB-subdivision ingenuity—and of rousing tech feminism—from the first season.)

Design techniques never fully disappear, even if they’re outdated. Companies to this day, notably Munich-based Doepfer, which introduced a format standard called Eurorack in the mid-1990s, still can have perpendicular boards, as well as internal cabling. To read circuit boards is to read the history of technology, music and otherwise. The operational amplifier, or op amp, employs negative feedback. Negative feedback was developed by Harold Stephen Black back in the late 1920s, and it’s ubiquitous to this day. Chips like the op amp are plainly labeled, so you can look them up online to discern their purpose. They’ll likely be adorned with company information, a part number, the date of production, and a mark indicating pin 1, which helps the assembler with proper positioning.

Matt jumps to the present day and powers up PCB design software on his laptop. The laptop is an Apple, but the software needs to be run within Windows, so he first brings up a Windows emulator. The screen loads slowly, and then it is suddenly flush with a gorgeous psychedelic vision. The myriad colored squiggles are all visualizations of eventual copper connections. These are the internals of the OP-Z synthesizer, a new device that Teenage Engineering has been teasing musician-consumers with for over a year. One ingenious aspect of the OP-Z is it will have no screen—you’ll just plug it into an iPad.

Matt’s show and tell helps display just how complex boards have gotten, even if they remain rooted in history. Each act of miniaturization is a hyper-optimized codification of an earlier technological achievement. The compact nature of the OP-Z and other devices is owed to the multilayer boards. The OP-Z’s will be eight layers thick, though to the untrained eye it will look essentially like one board. Even to the naked eye there will be distinguishable characteristics. Most of the items on it will be surface-mounted, for example, meaning they won’t be punched through. The boards are covered with tiny little circles. These are “vias,” for “vertical interconnect access,” which allow the tightly packed layers to move data, sound, and power back and forth.

And even if a PCB board can’t be read in full, it can be signed. If you look very closely at the screen, in the upper corner of the virtual board’s current design, there’s a little “MH 2017” that registers Matt Holland’s contribution to Teenage Engineering’s group effort. This will likely disappear from the OP-Z PCB before it is put into production. Matt says that during his first job out of college, for an ASIC (or application-specific integrated circuit) company, he attempted to hide his initials in some metal wiring. A few weeks later he received an email from his boss: “Nice try.”