Is Contemporary Music Ready for a Baby Boom? 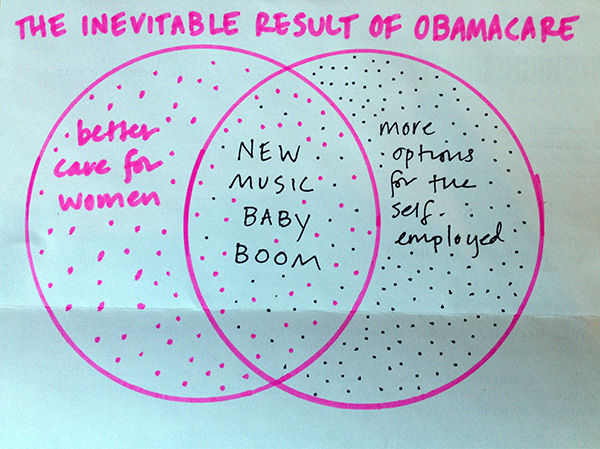 My string trio—a group of three women—has long talked about what will happen, how our professional lives together will change, once we start having children. Half joking, half deadly serious, we’ve considered trying to conceive in the same month. We’ve wondered if we could save money by sharing a rehearsal babysitter. We’ve looked on happily as the Chiara Quartet toured with their babies, and nervously as other chamber musicians left their ensembles shortly after giving birth.

“No need to worry til 2014,” Sara always said, reassuring us with a date that seemed blissfully far away. “Not until Obamacare in 2014.”

She was right. Back in 2012, regardless of how married or unmarried we were, or how emotionally ready or unready we felt, none of us were considering having a child anytime soon—because we couldn’t afford to. Since we were all self-employed freelance musicians, we purchased our insurance on the individual market rather than through group plans (as an ever-shrinking number of people in the US do). Occasionally, out of curiosity, I had looked at ehealthinsurance.com to see how much a self-employed person like me would have to spend for maternity coverage. Although I was paying $250 a month for mediocre insurance for myself, at one point my search revealed that I would need to spend more than $800 a month in order to access maternity care. Even more daunting was the fact that I would have to pay this amount for a year before the insurance company would approve any related claims. In other words, I would need to spend $9600 in premiums alone before I was even allowed to get knocked up. In the early stages of developing my career as a violinist and writer, this represented about half of what I earned in a year.
It wasn’t a very good deal, and as it turns out, women’s health advocates around the country had noticed. The National Women’s Law Center reported similarly outrageous “maternity riders” around the country: in Kansas, where a best-selling plan cost around $220 a month, a maternity rider would run you $1600 a month.

The Affordable Care Act made some of its most sweeping reforms in the arenas of health care for women and health care for the self-employed. This means that female freelance musicians are among the Americans whose lives have been most deeply affected by this policy. Women can no longer be charged more than men for their policies, maternity care can no longer be excluded, and it’s easier and more affordable for self-employed artists to obtain coverage. The year that we have long anticipated has finally arrived, and one of our biggest roadblocks to procreation has been removed. You heard it here first: I predict a creative-professionals baby boom in the coming year.

Although reports vary as to whether the contemporary music audience is withering or widening, a few more small, wiggly butts in the seats won’t hurt. We could raise an army of babes who love Boustead, toddlers who love Thomas, kids who love Kirsten, adolescents who love Abrams. But is contemporary music—its career arcs, social scenes, traditions, and infrastructure—ready for a baby boom?

Just as new parents need to babyproof their homes before the precious bundle arrives, the contemporary music community needs to take a look around and see how prepared we are. Are we a family-friendly field, or are there some sharp edges that will alienate new parents? Are there any proverbial marbles we should pick up before somebody chokes? I’ve poked around in the closets and looked closely along the baseboards, and I found some areas for improvement.

Composition’s high premium on youth: The dominance of the “young composer” competition, like many of our society’s career trajectory expectations, is unfriendly to anyone who chooses to prioritize family during what is supposed to be their professional prime. If you’re busy raising children from about 29 to 39—the years when, fertility-wise, women are most likely to do just that—the “under 40” competitions are gone by the time you’re ready to refocus.

No-kids-allowed artist residencies: Retreating into creative solitude is considered an essential step for working composers, but for parents of young children, it can be hard to find an environment that allows both creative space and continued commitment to, for instance, breastfeeding. One San Francisco-based organization, recognizing this particular challenge, offers grant support exclusively to writers and visual artists who have a child under 18. I’m not aware of any musical organizations offering something similar.

The importance of being hip: In this great article about how the “having it all” debate relates (or doesn’t) to visual artists, author Katherine Gressel notes that becoming a parent can result in an unfortunate downgrade of your personal brand. Our culture doesn’t tend to perceive parenthood—and motherhood in particular—as “hip, cool and fascinatingly eccentric.” That can be a problem in a field that values both the practice and the appearance of edgy risk-taking.

The prevalence of low-paying work: It’s one thing to play a show for fifty bucks when it’s just yourself you have to feed. Once kids come into the mix, it’s hard to weigh artistic gain against the quality time, precious sleep, or childcare dollars lost. This, of course, is why so many musicians try desperately to become as established, well-known, and in-demand as they can before starting their families.

The increasing importance of late-night shows in bars: This one’s pretty self-explanatory. Baby bedtime is 7 p.m.
Have your ovaries frozen yet? Don’t worry; it’s not all gloom and doom for our boom.
Babies haven’t been alive long enough to be cultural reactionaries. In Chicago, city cultural planners are already banking on the artistic adventurousness of toddlers with their experimental art series, Juicebox. In New York, the Brooklyn stroller set enjoys the innovatively programmed “Baby Got Bach” series. Having some seriously impressionable little ears in our posse will be great.

In our field, we know about banding together—and that means childcare co-ops. “The hardest thing about parenting kids of any age is finding affordable, flexible, reliable child care,” said Erica Burtner Anderson, oboist with Quintet Attacca. “Every week in a musician’s life is full of unpredictable scheduling challenges.” Is this a problem that artists could band together to help solve? Community-building organizations like New Music Chicago and the New Music Bake Sale show that we can pool our resources for the betterment of the entire community. So whether we’re straight or gay, breeding or adopting, let’s help each other get our kids in good hands. And for the infant years, purchase an extra-large rehearsal crib.
Although unpredictable schedules can be tough, in some ways they’re ideal for new parents.” Since most musicians have time during the day, it’s great to be the parent of babies and young children,” Anderson said. “We get to see them when they are alert and then we go to work during dinner and bedtime. Unfortunately, this changes when the kids are school age, since the only time they are home is when we work.”

The costs won’t bankrupt us like they might’ve before. When I asked my friend Sara—the one from the beginning of this story—how the Affordable Care Act had changed her perspective, she was optimistic. “Raising a family will still be difficult and costly, but it is no longer impossible or unrealistic, and that gives me hope,” she said.

Parenthood is extremely cool. It’s not hard to call to mind a long, exciting list of accomplished musicians who are also parents: composers Sarah Kirkland Snider and Steven Mackey, composer/performer Shara Worden, pianist Sarah Cahill, all the Bang on a Can co-founders, and Chicago luminaries Joann Cho and Jonathon Kirk, Amy Wurtz, Connie Schoepflin Volk, Michael Hall, and Seth Brodksy. Here’s a fun list of musical moms in rock music that might inspire you. See? So many of your colleagues are rocking their careers and parenthood simultaneously, you’d be silly to lose any sleep over not being “hip” anymore. You’ll have plenty else to lose sleep over instead.