What the nief-norf Summer Festival seeks to accomplish is a merger of the fields of performance, composition, and scholarship. In effect, nnSF pushes performers, composers, and researchers into the same room and locks the door. What may sound like a chaotic situation, however, is far from it; the effects are outstanding, invigorating, and inspiring.

As I returned to the nief-norf Summer Festival (nnSF) in Greenville, South Carolina, for a third year this summer, I was asked by many friends why I chose to continue to participate in this festival, rather than others. There are certainly plenty of options in the United States for a festival of the same duration and within the same price range if your interests are centered on new music. My answer revolves around the intersection between performance, composition, and research, and the amazing people who perform those interrelated tasks.

This festival is not focused on simply workshopping classic solo and ensemble pieces for performance, nor is it focused on teaching composers how to write eloquently in chamber settings, nor is it a meeting of scholars in isolation from the rest of the music community. Rather, what nnSF Artistic Director Andrew Bliss seeks to accomplish is a merger of these three disciplines. In effect, nnSF pushes performers, composers, and researchers into the same room and locks the door. What may sound like a chaotic situation, however, is far from it; the effects are outstanding, invigorating, and inspiring. 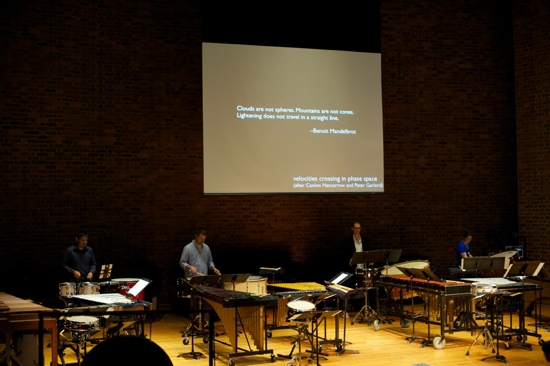 The ten-day festival—hosted by Omar Carmenates at Furman University—revolves around a core series of concerts involving both the participants and the faculty. Originally only focusing on percussion music, the proceedings have expanded in the past two years to include a composition track, as well as cello and piano performance fellows. The first concert took place on the evening of May 28 and featured four of the faculty performing John Luther Adams’s evening-length percussion quartet Strange and Sacred Noise. Ominously hovering above the stage, projected onto the back wall, was a quotation by Jacques Attali that serves as an epigraph to Adams’s score:

Nothing essential happens in the absence of noise…in most cultures, the theme of noise lies at the origin of the religious idea…Music, then, constitutes communication with this primordial, threatening noise—prayer.

While serving as a thoughtful prologue to the music, this quotation also effectively set the tone for the festival. Music functions as a means of communication but also, as Attali suggests, as a means to reach beyond our own sphere of understanding. Music occurs not in isolation, but through a communal effort in which potentially great things are achieved.

Andy Bliss, Kerry O’Brien, Omar Carmenates, and Mike Truesdell took to the stage and calmly delivered a precise performance of the mammoth piece. Strange and Sacred Noise is 75 minutes of carefully crafted process and was complimented by projections of each movement’s title, along with visual images and texts corresponding to each movement.

The following day, the performance fellows were tossed straight into rehearsals to prepare for the first of three chamber music concerts. Fellows are assigned and sent music before the festival begins, which allows for rehearsals to pick up at the late stages of preparation. In the three years that I’ve attended nnSF, the performance fellows are always class acts, arriving with their music prepared–their parts pasted into puzzle-box-like contraptions of poster board and tape in order to facilitate page turns–and often bringing fresh and exciting ideas for the pieces that allow for rich interpretations despite the compressed rehearsal period. The rehearsals function as an exciting dialogue between the young professionals and the faculty, and the results are always fantastic.
That evening, everyone gathered at Horizon Records in downtown Greenville for the participants’ cabaret concert. If you ever have the pleasure of visiting the beautiful city of Greenville, South Carolina, I highly recommend stopping at Horizon Records. Gene Berger’s shop houses thousands of amazing records and CDs—both new and old—and he and his staff create a welcoming atmosphere.

The cabaret concert is an opportunity for performers to bring solo pieces to share, and this year a huge range of works were performed, including pieces combining theater and percussion, the inevitable classics, and the increasingly popular Postludes for Bowed Vibraphone by Elliot Cole. Cello faculty member Ashley Walters performed Andrew McIntosh’s Another Secular Calvinist Creed, a piece that required the cello to be tuned according to just intonation and that fully exploited Walters’s steady virtuosity. We all sat mesmerized as her hands calmly leapt up and down the fingerboard and summoned eerie, captivating tones. 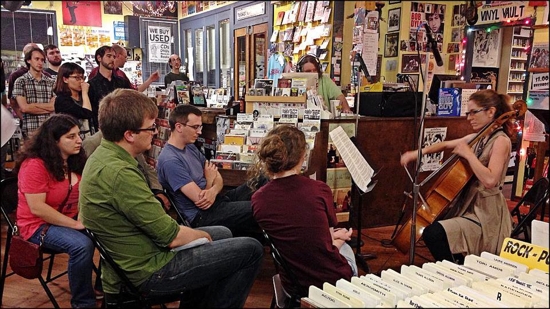 The following two days consisted mostly of rehearsing for the first of the participants’ chamber concerts. Two of the four Call for Scores winners’ works were to be featured on this concert, and those composers (Bryan Christian and Travis Alford) gave presentations on their pieces that morning. In the evening these new works were performed alongside compositions by John Luther Adams, Steve Reich, Kate Neal, John Cage, and Mark Applebaum. The combination of the quality of the music and the momentum of such a fast preparation period led to an exciting night of music making. The audience, consisting mostly of locals from Greenville, also contained many of the scholars who would be presenting at the nief-norf Research Summit the following morning. 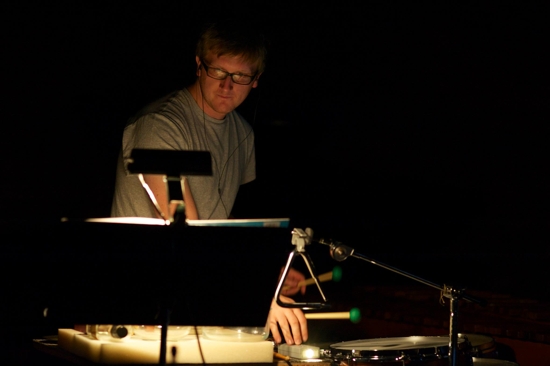 I haven’t attended any research summits or conferences outside of my experience with nnSF and have often found academic musical analysis to be bewildering and unapproachable. This has been a hurdle I have been able to scale, thanks in part to attending the research summits hosted by nnSF in 2012 and 2013. Performers rarely get to engage with this sort of academic work, and it can be difficult to convince us that it’s important or interesting in the first place. Kerry O’Brien, who organized the Research Summit this year, did a good job persuading everyone, however. Early on, she made the point that it is exceedingly rare for scholars to attend a concert as audience members one night, only to take the “stage” the following day to present their most recent research to a room full of performers, composers, and fellow scholars. The performers and composers participated actively, often raising interesting questions and continuing discussions outside of the lecture hall, well into that evening’s “group hang” at a local bar in downtown Greenville. The research summit really takes the cake, in my mind, and makes nnSF such a unique and rewarding experience. Being confronted with scholarship (and the scholars themselves) really urges you to examine your own approach to the music you play or compose. It’s a healthy reminder that our music is traveling out into the world, and that people are receiving, considering, and responding to it. 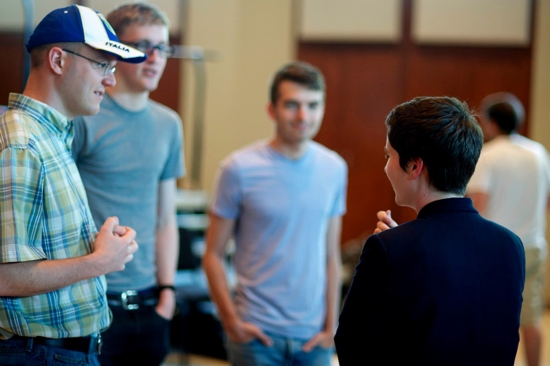 This year, the focus of the summit was on music and technology (post-1945) and the presentations stretched out beyond chamber music to cover much broader topics. In addition to presentations by musicologists and theorists, performers and composers also gave a wide variety of papers. After dinner, the entire festival gathered to attend an evening concert featuring the keynote speaker, Scott Deal. Deal is professor of music and the director of the Donald Louis Tavel Arts and Technology Research Center at Indiana University Purdue University of Indianapolis (IUPUI), and his recital featured a full evening of fascinating works involving interactive and fixed media components that expanded the already full stage into a completely unique sound world. Often joining Deal onstage were harpist Erzsébet Gaal Rinne and laptop musician Michael Drews. 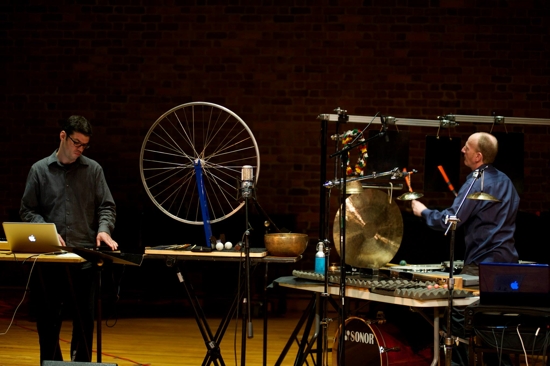 The following morning we began rehearsals for the Composer Fellows’ Concert, which would feature six different world premieres of pieces written by the six composition fellows attending nnSF. Percussion is often fairly daunting for composers who do not play percussion themselves or personally know a percussionist. The chance then to be surrounded by percussion music, instruments, and live percussionists for an extended period of time is an opportunity for composers to get a foothold on an otherwise steep slope. Similarly, time spent hashing out the more esoteric extended techniques of the cello proved valuable, and many of the effects made their way into the compositions. 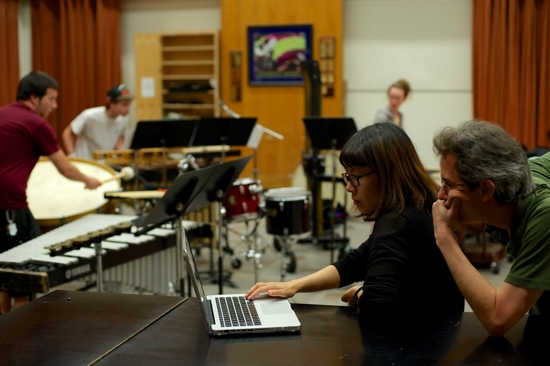 Under the expert eye of Christopher Adler, the nnSF composition director, the six composition fellows experimented with various sound combinations, while seeing the performers physically engage with the instruments and having the opportunity to talk extensively about notation, sound production, and any other facets of percussion playing that piqued their curiosity. Throughout the week the composers worked with the performers assigned to their compositions, tweaking and refining notational plans and often making considerable adjustments to instrumentation on the fly. For the performers, working so closely with composers helped us to learn how to clearly communicate our own limitations and expectations and, more often, to find creative ways to accomplish what was being asked of us. 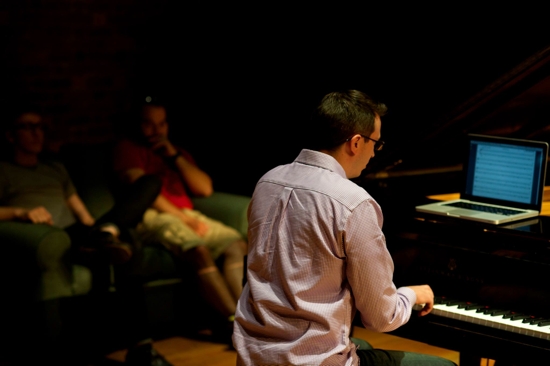 With couches pushed onto the stage and the audience invited to come and go as they pleased, to lay down if they wished (but to please not snore), Lee began the piece. He bathed us in a fragile sound world of expansive proportions that urged listeners to examine their relationship to harmony, pitch, and eventually to sound itself. About two hours into the performance, it began to rain, initiating an achingly beautiful soundscape: soft echoes of the raindrops filled the hall, serving as a perfect compliment to the music’s own delicate patter.

The last concert featured composer-in-residence Evan Ziporyn’s Where Was I? (for cello, percussion, and piano), works by two Call for Scores winners (Nicholas Deyoe and Lewis Nielson), and a realization of Earle Brown’s graphic work December 1952. Being confronted with considerably more difficult music, the intensity of the rehearsals heightened, although the atmosphere never became tense or discouraging. As the performance fellows took the stage for the final time, the feeling was somehow different. In ten short days, the ceaseless rehearsal schedule combined with the long discussions into the night, shared meals, and walks around Furman’s beautiful campus had created a strong sense of camaraderie between us. Instead of performing these works with strangers, I was on stage with my colleagues and new life-long friends. 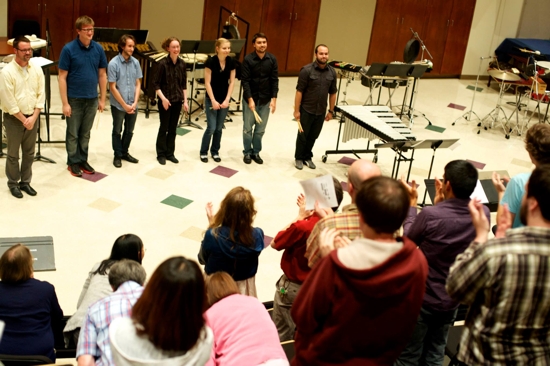 As we began the final piece, Lewis Nielsen’s vast Tocsin for six percussionists, I recalled another passage I had found in Attali’s Noise:

“We must learn to judge a society more by its sounds, by its art, and by its festivals…”
If we take Attali’s criteria to heart, festivals like this one—festivals that celebrate and encourage amazing art, amazing research, spurred and promulgated by amazing people—are gems to our society.

*
Alexv Rolfe is a percussionist currently residing in Dekalb, IL, where he is a candidate in the M.M. program at Northern Illinois University. In addition to writing and reading about music, Alexv enjoys performing in different western and non-western traditions and is also a budding amateur cook.
(All photography by Live Well Photography)