The No Idea Festival recently celebrated its ninth year with seven days of concerts in Austin, Houston, and San Antonio. An international roster of artists participated in workshops and performances in spaces large and small and, as a run up to the festival, the No Idea Sunday Series featured four performances from local and regional improvisers. 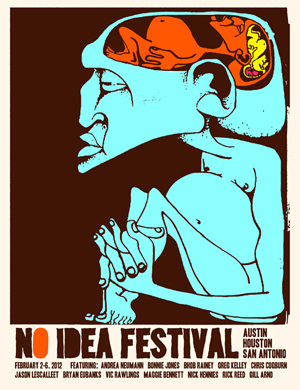 To the uninitiated, free improvisation can often seem formless and confusing. Unlike theater or comedy, the lack of text to provide a narrative can leave an audience member lost in a world of sounds, rhythms, and gestures that may be difficult to reconcile as a whole. The “free” in free improvisation can give the impression that anything goes, and while there may be a kernel of truth in that, those for whom improvisation is a regular and important part (or the whole) of their musical experience know that the real freedom in improvisation is working within the initial constraints that often come in the opening moments of a performance. Listening, communicating, and moving towards a cohesive realization is no less than real-time composition, and to do it well requires experience, patience, and perhaps most importantly, restraint.

The No Idea Festival recently celebrated its ninth year with seven days of concerts in Austin, Houston, and San Antonio. An international roster of artists participated in workshops and performances in spaces large and small and, as a run up to the festival, the No Idea Sunday Series featured four performances from local and regional improvisers. Each performance was preceded by screenings of Derek Bailey’s documentary On The Edge: Improvisation In Music, a series of four 55-minute films broadcast in the UK in early 1992. The Austin NIF shows took place at The Broken Neck, a venue in east Austin that has not forgotten that a warehouse is supposed to be a huge unrefined space. Nods to acoustics were evident, but by and large this was a space that could in no time return to its storage or manufacturing roots. AV equipment was ubiquitous, not just for use by the performers but in service of archiving the event and at times the two sets of equipment seemed to overlap. NIF was sponsored by some of the usual suspects, including the Texas Commission on the Arts and Meet The Composer (its logo now amended to reflect the New Music USA transformation), as well as a few local heroes like Ruby’s Barbecue (Austin) and St. Arnold’s Brewery (Houston) which supplied a great spread (gratis!) and a keg respectively, with beers available for a modest donation. 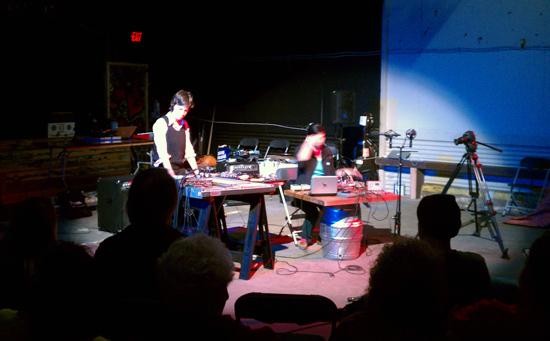 The first set featured Andrea Neumann from Berlin and Bonnie Jones from Baltimore. Both artists were set up behind large custom-made electronic kits attached to boards approximately three feet square, replete with hard and soft-wired elements. Neumann’s board also featured the miniaturized guts of a piano which she was able to manipulate both physically and electronically during the performance. As Neumann began generating a low frequency, Jones slowly played bells that recalled the sound of an analog phone. Neumann’s frequencies slowly opened up, though still remaining in the low range, while Jones began to create light static in a rhythmic pattern, the pulsing beats panning across the stereo field. Jones used her fingers to create and break connections on the board, causing small, pointed moments to occur slowly and without pattern, like rain dripping from a tree long after a storm. Neumann began to work with the “piano,” physically playing a few notes while the electronics transformed the sound, the last note of which became the only controlled and sustained feedback of the set. While the feedback echoed in the space, Jones manipulated a number of stompboxes and other custom equipment, at one point dragging one piece around the board, using the sounds of the analog contacts connecting and disconnecting within the device to create a counterpoint to the feedback and a reimagining of the previous patternless rain music. 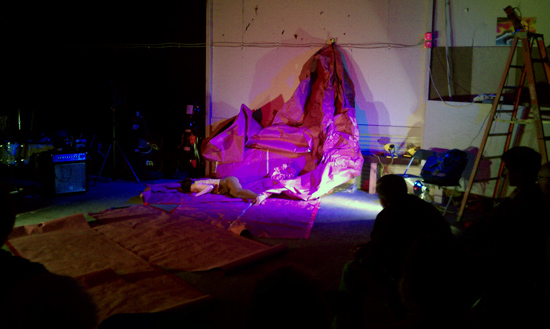 Maggie Bennett’s dance set began as the audience returned to their seats following a brief set change. Attached to the wall was a tremendous paper construction, like a waterfall pouring from the wall and flowing ten feet across the floor. Bennett’s performance was an exercise in control, her movements mostly small and subtle, at one moment seeming to fall asleep and the next moment waking up on the large paper wave. It was a compelling and direct translation of movement into sound, so much so that late in the set when she moved away from the paper, I experienced a bit of cognitive dissonance in that it was odd to see her move without hearing the sound of the paper. It struck me that in conventional dance the sound of the dancer’s feet slamming into the marley flooring is always distracting. It’s a sound that I’d rather not hear if possible, but here the secondary sound was developed, celebrated, and made a strong follower to Bennett’s lead. 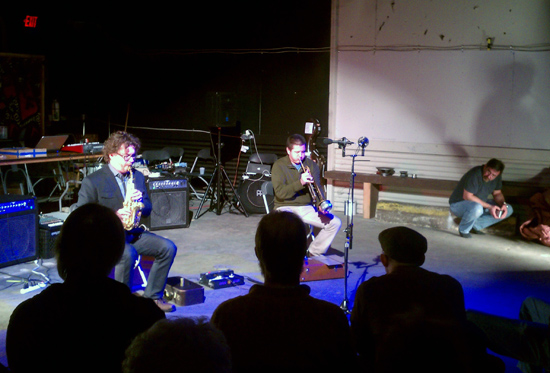 Sound artist Jason Lescalleet was joined by his nmperign collaborators Bhob Rainey (saxophone) and Greg Kelley (trumpet) for the third set of the evening. Lescalleet used a variety of reel-to-reel and hand-held tape machines to create organic textures. He began by placing a reel-to-reel unit at the front of the performance space and setting in motion a length of analog tape which went through and then out of the machine, made a circular trip several feet around a microphone, and returned to its origin. A broken ostinato slowly formed from this circuit and remained for the first few minutes, establishing itself as a static framework. Rainey joined the ostinato, his sax sounding long tones like a sine wave mixed with breathing through the instrument that recalled the broken static of the original signal. Lescalleet moved almost constantly around the stage and behind his own electronic setup at the back, manipulating various pieces of equipment including smaller tape decks that were placed on the side of the stage. Kelley removed the mouthpiece from his muted trumpet while he and Rainey complimented the spare tape textures with long, quiet, subtle quarter-tone lines and more breathing and blowing through the instruments. As the piece developed, Lescalleet removed tape from one machine, spliced and taped it on the fly, and fed it into the main machine at the front of the stage. While he held the tape, minute changes in the timbres could be heard as the tape machine motors worked to keep the mail moving through the system. Low aquatic sounds shared space with more breath effects from Rainey and Kelley, leading to pops and crackles from the reassembled tape. Finally, Lescalleet disconnected each of the machines, bringing the performance to a close. 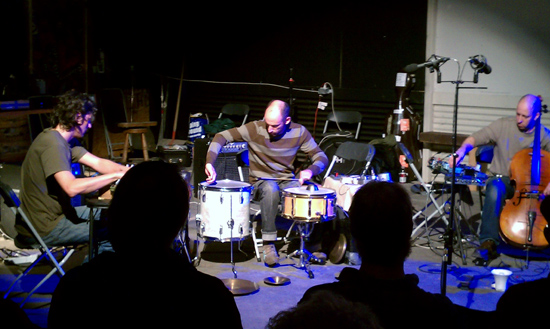 The fourth set featured Chris Cogburn, Bryan Eubanks, and Vic Rawlings on percussion, electronics, and cello respectively, performing as LUCRE. Though Eubanks’s contribution was primarily electronic, both Cogburn and Rawlings had their own electronic setups as well which they used during the set. The performance began with Cogburn creating resonance on a snare drum (snares off) by dragging rubber beaters and other materials across the head of the drum. With cymbals placed on a tom tom, Cogburn used a long thin dowel and did his best fire-starter impression, using both hands to create vibrations in the stick that drove both cymbal and drum. Eubanks created a slight white noise texture that extended for several minutes while Rawlings drew clicking sweeps from the cello, the sound further altered electronically to sound a bit like the ocean from very far away. Most of the performance (and this was true of all the performances) utilized primarily old school analog electronics, with instruments and sounds largely derived from older hardware, but this section also featured the odd contemporary digital moment, adding a welcome trace of “reverse anachronism” to an otherwise earthy and visceral show.

It was impressive that in these chamber performances the members of the ensembles spent as much time (or more) listening as they did playing. Thoughtful, well-paced conversations and occasionally conventional forms with fairly clear beginnings, middles, and ends (as opposed to more open-ended jams in which less formally connected smaller moments and motives might play a larger role) were evident in each set. Among Cogburn’s goals for this yearly festival is to provide a forum for performers to improvise together multiple times, not just within a given festival but over the course of several meetings over many festivals. These relationships change and grow over time, and it’s a treat for performers and audience members alike to experience the results of that growth.