I Came Here With Nothing: 21st-Century Paths in Music Education

Danielle Ferrari was a very lost graphic design major when she was accepted into the San Francisco Conservatory of Music’s groundbreaking Technology and Applied Composition program. But she found an educational gold mine that allowed her to learn everything she needed and more to be happy as a music creator.

I applied to the San Francisco Conservatory of Music’s Technology and Applied Composition (TAC) program as a very lost graphic design major transferring from the University of San Francisco. While I didn’t come from a strict classical background, I was a multi-instrumentalist, songwriter, and a passionate electronic music maker. Thankfully, SFCM saw a certain sense of originality and talent in my art, and I got accepted into one of the newest and most groundbreaking music technology programs that a conservatory has ever seen.

Why should a conservatory have a technology composition program? Music is always evolving, and conservatories should be the place where we can explore and pioneer this evolution. For 98 years, in general at SFCM you’d hear music from the 17th to the 20th centuries radiating out of its practice rooms and into the hallways. The game changed with the birth of TAC, founded by Executive Director MaryClare Brzytwa. With programs like TAC, students get the best of both worlds—the opportunity to study foundational classical music as well as the ability to explore new cutting-edge music technology. Coming from a graphic design background, using the latest tools and software had always been second nature to me. What I deeply hungered for was access to knowledge of the classical music world, something which most other music technology programs severely lacked. Every conservatory should offer an integral technology and applied composition program as a bachelor’s degree course.

The TAC program is designed to push students out of their comfort zones and into the realm of growth, experience, and discovery. From building musical applications in Max/MSP to cranking out a fully orchestrated score for a five-minute film cue, students are constantly challenged to learn more and perform better.

As freshmen, we are thrown immediately into the fire as one of our first tasks is to compose a one-minute suite for a fictitious video game. Only the work of a select few will be chosen to be recorded by professional musicians at Sony PlayStation’s studio in San Mateo. This assignment is especially challenging because most of us are scrambling to learn how to use a digital audio workstation for the first time.

It’s a fun ride to be on, when we walk into the classroom not knowing what to expect then suddenly have a ton of opportunities thrown at us. Last semester we worked with a local filmmaker on his documentary. The filmmaker himself had contacted the school looking to see if any composition students were interested in scoring his film, as the film had a heavy opera theme throughout. This became one of TAC’s main semester projects and, like every project, we poured everything we had into it. I ended up scoring 20 minutes of music for this project, and it became my first real professional credit.

Recently, TAC students have been working in collaboration with the San Francisco Art Institute (SFAI) on scoring their student film. The students at SFAI are creating a modern Macbeth, and our scores will be recorded at Skywalker Ranch.  Opportunities like these are continually laid out on the table for us, and we are responsible for grasping as many as we can and then running with them.

These are just some of the experiences we get, on top of having the traditional conservatory experience of studying music theory, orchestration, and harmony, as well as history and other general education classes.

If I were to offer advice to other conservatories based on my experiences in the TAC program, I’d say there are a few core ideas that will need to be implemented:

Recording Department
It’s important to teach students the most foundational recording studio skills. Recording, mixing, and editing know-how are invaluable for a lifelong career in music. Every live performance at the conservatory needs to be recorded, so teaching and allowing students to run this process achieves both goals at the same time. The recording department at SFCM is now almost completely student-run, with the head audio engineer being third-year TAC student Seira McCarthy.

Special Projects
Find outside projects that people in the community are passionate about and see if they would like to collaborate, or have students put together a seasonal concert of live electronic and avant-garde music. It’s important to be open and allow students to explore their creativity in a program like this. There is no straight path to achieving music nirvana, so it’s important to have an accepting and open program for students to show off their performance and composition skills.

A Badass Executive Director
My director and mentor MaryClare Brzytwa has pushed me further than I ever dreamed of going, and has never let me get away with cutting any corners. As an example, when I applied for a job to be a department assistant, she assigned me to be a recording engineer because during my freshman year, when other students were setting up audio equipment, she saw me hiding because I didn’t know how to do it. She wanted to be sure I would do the work I ran away from. And it worked. By forcing me to break down those barriers, I’m no longer afraid of setting up mics or running Pro Tools sessions. 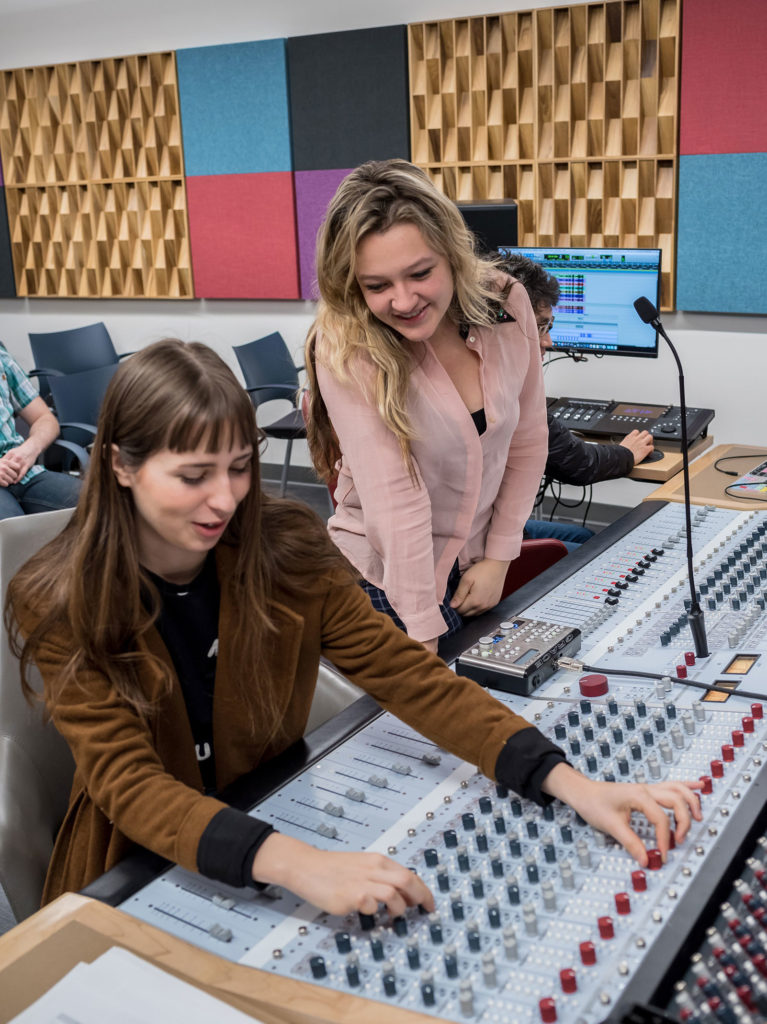 After four years of TAC, when you look around the conservatory, classical music is still radiating out of practice rooms. But now, there are also students playing synthesizers, building MIDI instruments, and collaborating as creators and musicians as well.

As that lost graphic design major, TAC was the gold mine I found that allowed me to learn everything I needed and more to be happy as a music creator.