How We Pick Rep and Keep Surprising Our Audiences

Choosing new rep is one of the most thrilling aspects of being in Sybarite5, and people ask how we do it all the time. It’s not a quick process, but it’s designed to let us grow artistically while also keeping our audiences deeply engaged.

How does my string quintet Sybarite5 pick the music we play?

People ask me this all the time.

First of all, it’s important to know a little about how we program and perform. We program in modular fashion. What do I mean by this? Selections are usually three to eight minutes long, so we have great flexibility. It’s easy for us to slip newer works and experiments in and out of a set. This also allows us to tweak programs on the road. Much like a rock band, there’s an element of excitement and surprise in not knowing exactly what’s next, and we use that to create dynamic concert events as much as possible. If someone writes us a 30 to 50 minute piece, chances are slim we’ll play it often. Sometimes composers send us multi-movement works, and often we treat each movement as its own piece.

This happened recently with a new piece written for us by the just-announced 2018 Pulitzer finalist Michael Gilbertson. We commissioned a three-movement, 20 minute work using awarded funding from BMI and Concert Artists Guild. Once we got the music, we realized it was just going to be too much for one show. We decided that the best way to premiere the piece was to break it into three separate works—Endeavor, Outliers, and Collective Wisdom—and to premiere each piece individually over the course of 18 months or so. At first we were freaked out by the idea of splitting it up, but once we talked with the composer, we realized what a blessing it was. This gave us three world premieres to talk about instead of one, while also providing the space to get to know the composer and the flexibility to experiment with his music over a longer period of time. I believe wholeheartedly this approach gave us more focused and higher-level performances, all the while fitting with our modular program. (Wanna hear it? We’re premiering Endeavor on May 3 at the cell theatre in NYC. Event info here.)

Also important to know: all of the works on a Sybarite5 concert are announced from the stage. Anyone who knows me knows I feel strongly about this. There are a couple of reasons for this. First of all, the last thing I want an audience member to be doing is checking a program for what’s coming up next or studying how to spell the composers’ names. I want them 100% listening and watching, not reading and researching. I want them in the moment with us as much as possible. We do recognize that the composers are VERY important to us and our fans, so we publish our setlists with precise titles, composer names, and links on our blog right after each show. That way, people can get the info they need without being distracted during the show. Here’s an example.

Also, everyone in the ensemble speaks with the audience. This also gives us a chance to talk about the music, what it means to us personally, and where the audience can find it directly.

Don’t worry, we don’t leave our audience completely in the dark. Our printed program generally describes the show and mentions key composer names. Here’s an example:

Outliers: Sybarite5 is always on the lookout for new tunes and composers that speak with a unique and relevant voice. Outliers is a celebration of works written for us by our favorite composers and friends we’ve made traveling the world performing music we love. Sybarite5 plays the music of its friends Andy Akiho, Shawn Conley, Jessica Meyer, Marc Mellits, Brandon Ridenour, Daniel Bernard Roumain, Steven Snowden, and Dan Visconti paired with the group’s favorite works of Armenian folk music, Piazzolla, Barber, and Radiohead.

Regarding talking with the audience, I want to be clear here: I believe in engagement before information, so we don’t give a lecture about sonata form OR the polyrhythmic structures in our music. That is not gonna happen at our shows. Why? Because ~93% of the population does not want to hear about that; they cannot actually process that information in a performance-enhancing way.

Only 7% of Americans are in the “art club.” Meaning they self-identify as people with the arts as a central part of their lives and identity, and function according to understandings and abilities its members have developed. We make two big mistakes in trying to expand the reach of art beyond the club members: 1. We make false assumptions that those not in the Club think and function the same way as people in the Club, and they don’t. For example, we assume everyone can read a composer’s bio in a program and turn that into an enhanced experiencing of the performance—that is usually true for Art Club members, but not true of those not in the club. I based it on several studies from the UK, Canada and the U.S.—psychographic research mostly, but the interpretation is not a hard research finding, but interpretation. 2. We focus way too high a percentage of our creative energies on the Club, to keep them happy, to prevent anything they might find unsettling. Eric Booth

I agree with Eric. At best 7% know the difference between terms like baroque, classical, romantic, neo-classical, minimalism, serialism, or Gustav Mahler vs. Antonio Vivaldi.   So the minute you use a term such as “rondo,” “looping,” “allegro,” or “G major,” you lose 93% of the audience! No bueno. So, we often speak about what the music means to us personally, or—if there is one—tell a story about how the music came into our repertoire. We rarely talk about what the music is literally about because I want the audience to decide for themselves. At the end of the night, the audience leaves knowing us and the music better. In the end, I find this to be a powerful performance tool. And it also means we need to know the music and the composers on a more profound level. 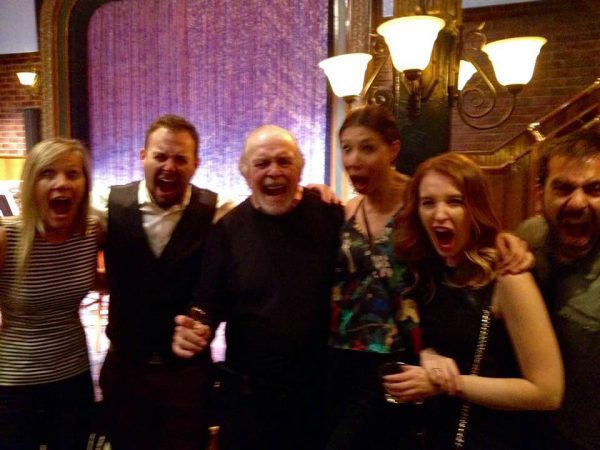 To much energy for the camera to capture: Sybarite5 with composer and friend Francis Schwartz

How do we select our rep? Sometimes we have loose parameters, simply deciding it would make a great opener or a great closer. Sometimes a piece just speaks to us or fits like a glove. Sometimes it’s a very personal experience, and I like that aspect of it because it tends to give deeper meaning to our programming.

Truthfully, there’s really only one way we can add new rep: we do it together and in person. We read it together. We play through it in person. Sometimes we talk about what it means to us as individuals and what it may mean for our ensemble. Sometimes it’s a short talk; sometimes it’s a long discussion. There is trust involved. I have to respect my colleagues. I have to believe that if they are going to bring an idea or composer to the table, it’s important to them, and therefore important to the artistic growth of our ensemble.

Is this a quick process? No. Often it takes six months to two years before we can read a new work. Part of this is due to our huge pile of “to consider” music. Also, our touring schedule can be insane.

Do we have an open call for scores? Nope. Should you just send us music out of the blue? Probably not, unless you’ve got some mad street cred, or <gasp> we know each other. So, get to know us or have a mutual friend introduce us.

Before I end this post and as a reflection of how our ensemble actually works together, I wanted to include some thoughts on repertoire choices from the other people in Sybarite5. In the spirit of our collaborative efforts, here are some quotes from my bandmates:

Choosing new rep is one of the most thrilling aspects of being in Sybarite5. We look into composers that have a unique voice, that have a fresh and visionary approach, that are interested in expanding sounds and techniques for us, that are willing to grow and develop together during the collaborative process.

A lot of the composers that we end up choosing are acquaintances or friends, and they are aware of the programming we do, so seamlessly we incorporate their works into our repertoire. I feel mutual admiration ends up being a key component for a successful commission.

The musicians of Sybarite5 choose our repertoire in the most organic way possible: we play the music that we love. When considering composers with whom we build relationships, we look for a unique, authentic voice, and an aesthetic that makes sense with the rest of our programming. Many of the works we end up loving and playing again and again are by our instrumentalist friends who are new to composing – we don’t look for the most accomplished composers “on paper,” but rather find sounds that resonate with us.

If I discover a piece that I love and that I think would complement the other works in our current rotation, I’ll bring it to the group. Recently this was Josef Suk’s Meditation on the Old Czech Chorale “St. Wenceslas”, op.35a, which is a rich and lush romantic work with versions for string orchestra and string quartet. Had the idea of a string quintet been popular in Suk’s time, I don’t think he would have objected to a third version!

In SYB5, we love to surprise our audiences. Since we don’t have a library of existing repertoire to choose from for string quintet, we get to create our own repertoire with very few rules. I bring music to the group that is unusual and engages an audience in a new way. We challenge the definition of classical music, and it’s even better if we can present something in a way that’s never been done before.