How to be While in Rehearsals

I know people who have purposely worn dark colors to rehearsals because of the secret world of sweating that happens with a new work. But when in doubt about how to behave in the rehearsal room (or in meetings or when drafting emails, for that matter), always default to professionalism. 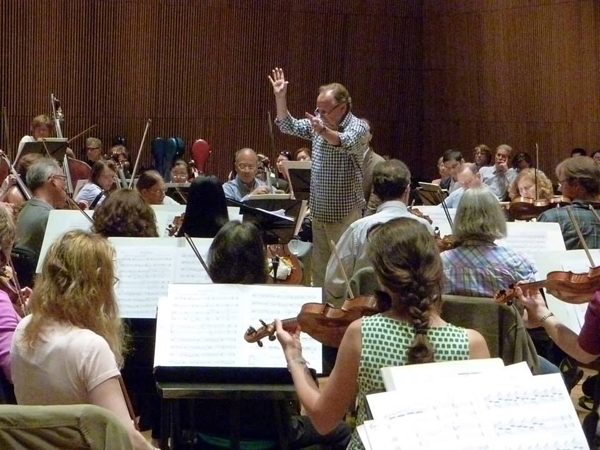 There’s nothing quite like sitting through a rehearsal of your new work. Many readers of this site will know this feeling. You are simultaneously evaluating the piece, assessing the performance, and keeping a mental tally of things you need to tell the musicians. I know people who have purposely worn dark colors to rehearsals because of the secret world of sweating that happens with a new work.

From the other side, as a conductor, I’ve learned over the years that each composer’s demeanor in rehearsals is unique. In the same way that everyone writes music differently, each composer has his or her own style of collaborating. Some want to play a very active role and some like to sit at the back and give an occasional thumbs up. Many of you are black belts at this, but for those composers just starting out here are some tips for having excellent collaborative skills in rehearsal.

I’m sure that you do this anyway, but when in doubt about how to behave in the rehearsal room (or in meetings or when drafting emails, for that matter), always default to professionalism.

Your score and parts will represent you a hundred times more than anything you do in rehearsal. Make sure that your score and parts correspond in all aspects to this MOLA document. It’s a compilation of what orchestra librarians across North America have agreed is the best way to present your music. Following these guidelines is how you will avoid glimpsing voodoo dolls of yourself with pins in them on the musicians’ stands.

Speak the language of music when providing feedback. I’ve found that many composers want to poetically convey the feeling of a passage when it would be better to give musical details. For example: “pianissimo instead of mezzo piano at measure forty eight.” Talk in terms of dynamics, articulations, tempos, sul pont vs sul tasto, accidentals, and so on. Speaking poetically about the piece as a whole is a great inspirational strategy, but in fixing individual moments, try to offer the musical specifics.

Don’t be embarrassed about changing dynamics. There have been premieres where we changed nearly every dynamic in the piece during rehearsals. If you need to fix things because you are hearing it in the hall for the first time, don’t be afraid to do it either on the spot or by providing a concise list by the next rehearsal.

Be authentic. If you don’t know the answer to a question, it’s O.K. to say you need to think about it.

Keep an eye on the clock when providing feedback. Your conductor has calculated the rehearsal time down to the nanosecond. Listen for cues from him or her as to how long you have to talk. It’s rarely enough time to say everything you would like to, so you often need to prioritize on the spot.

Roll with it. Sometimes musicians joke around a bit in rehearsals, especially if it’s been a tough week. Don’t take it as an affront to your music. I promise they are taking it seriously. They know it’s their responsibility to play every premiere as though it’s the greatest piece ever written. Based on my experience, on the night of the show, they’ll knock it out of the park.

Learn to conduct. I often hear from older composers (older than I!) that one of the things they regret is not learning how to conduct when they were younger. If you are in a composition program and there is a conducting program at your school, try to take some of those classes. It’s difficult to find conducting opportunities once you are out of school. The thing about conducting is that you have to want to do it and to make it happen on your own. And like anything really hard, it takes about ten years to learn how to do it properly, so starting early is a good thing. However, once you have a reputation for being able to competently conduct your own pieces, it’s a great way to eliminate the middle man and give feedback about your music directly to the players.

And last but not least, remember that your reputation will precede you. Always speak well of your colleagues, even when they are not there. When one composer is celebrated, don’t let jealousy cloud the accomplishment. It’s good for everyone as it brings more attention and opportunities to the community as a whole. New music is the little guy and we are all in this together, so be sure to support your colleagues whenever you can.