Based in Houston and drawing on some of the finest players in town and from around the nation, River Oaks Chamber Orchestra is gearing up for their tenth season. Founder Alecia Lawyer talks with Andrew Sigler about how this perception-challenging ensemble got started and where it’s headed.

Every single problem in the arts can be fixed by working on personal relationships.–Alecia Lawyer


Based in Houston and drawing on some of the finest players in town and from around the nation, River Oaks Chamber Orchestra is gearing up for their tenth season. Since its inception in 2005, ROCO has presented hundreds of concerts to a wide variety of audiences and in many different forms. Founded by oboist Alecia Lawyer, ROCO has commissioned or premiered 34 new works and during their upcoming season they will pass 40, including a co-commission in partnership with New Century Chamber Orchestra and A Far Cry for a piece by Derek Bermel. Lawyer was kind enough to take time out of her busy schedule to fill me in on how ROCO got started and where it’s headed.

Andrew Sigler: How did ROCO come about?

Alecia Lawyer: I had been a part of many start-up orchestras in NYC and in Houston and had had an entrepreneurial trio in NYC while at Juilliard.  While in Houston, when my church was being renovated I knew a chamber orchestra would be perfect there in this lovely Frank Lloyd Wright-style building with seating for around 550.  I wanted to build something for Houston, but also something very authentic and relevant to the classical music world.
I thought of the musicians who were with me at Juilliard and different festivals who actually smiled when they performed and took joy in their craft on stage; who could be vulnerable and open in performance; who could talk to an audience and engage them, not just entertain them; who performed with such fluency that the music became the language, not the entity.  I was lucky to have hired Suzanne Lefevre as personnel manager, who helped form the orchestra, as well.

AS: What are some areas of presentation that set you apart?

AL: We have many simple ways to make the audience feel comfortable without changing our product of fantastic classical music.  The concerts start at 5 p.m. and are over before 7 p.m., so people can do more than one thing in a night.  I put pronunciation guides for composers’ names [in the program] so people don’t feel dumb, and I include timings of pieces to allow people to get a sense of the scope of a piece. (And if they don’t like it, they know how much longer it is!) I married the idea of a kid’s night out with the concerts and now have ROCOrooters, a music education/childcare program during and after our concerts.  We don’t have a regular intermission.  It’s “Take 5” [style] and musicians actually clip on nametags and walk into the audience to greet our audience. ROCO is known as “the most fun you can have with serious music.” Our season consists of four main concerts with all 40 professional musicians (half of whom fly in to play) with repeat performances.  The rest of our 25-30 concert season is made up of chamber music in various venues and with many partners throughout Houston.  We actually perform in ten zip codes here.

AS: Your mission statement is to “shape the future of classical music through energizing, modernizing and personalizing the orchestral experience.” That’s a tall order. How do you accomplish this?

AL: We energize through musician involvement in programming and creative direction, rotating conductors ([the ensemble has] no named conductor), annual conductorless concerts, and world premiere commissions. We modernize through streaming live concerts into patient rooms at MD Anderson Cancer Center and Hallmark Retirement Home.  We are dedicated to bringing this music to immobile communities like the V.A. hospital, where we performed a veteran’s concert this season. We also have a Listening Room where you can hear our past concerts for free and also download them.  We offer ring tones by our individual musicians so you can carry your favorite ROCO musician with you wherever you go.  We have been broadcast nationally over 60 times on Performance Today. We personalize through accessibility where musicians and audience and board have relationships; through our musical collaborations; knowing our audience members by name; keeping the house lights up the whole concert to feel even more connected to our audience; having individuals or groups support each musician’s chair throughout the season (every musician has a sponsor or group of sponsors); commissioning and programming with actual people in mind and involved. 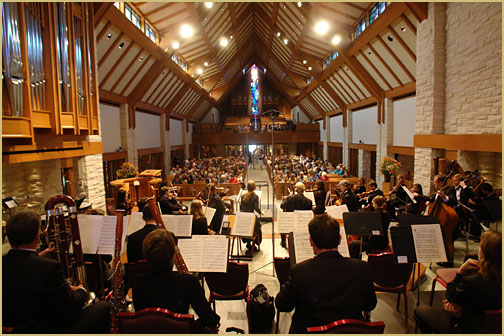 AS: You have a pretty spectacular group of players from all over the place. How were they assembled?

AL: They are not just from Texas!  NYC, Vancouver, Boulder, others I cannot think of. It’s more about people I knew and ROCO’s personnel manager, Suzanne Lefevre, who has a wide group of musicians she knows.  Plus her job is not what you would expect.  She is now named associate artistic director and has always been a partner in building the orchestra.

AS: You have had 34 world premieres (and counting!) in less than ten years. Are any/all of these commissioned works? How do you go about selecting these works/composers?

AL: Yes, all are world premiere commissions.  We have more that are either Houston premieres, or world premieres that were not commissioned by us. Some composers came to us in the beginning, but now that we are known for this I get submissions constantly and love it! I am constantly getting suggestions from the musicians in ROCO, as well, for repertoire and commissioning. Our big news this season is that we are doing a co-commission with New Century Chamber Orchestra and A Far Cry having Derek Bermel compose the piece.  ROCO will get the world premiere on Valentine’s Day next season.

AS: Houston is a large cosmopolitan city with many outstanding musical organizations of all sizes. How does ROCO fit into this?

AL: Many people don’t realize the difference in groups for classical music.  There is a 100-piece symphony orchestra on one end and then chamber groups on the other.  In between you have string orchestras of around 18-20 players and then a full-size chamber orchestra like ROCO of 36-40 performers.  Each of those four categories is its own animal with repertoire specifically for it.  We have other groups in the different categories, but are the only one occupying the full-size chamber orchestra space and truly sticking to that repertoire.  I love the flexibility we have for the main concerts with the full group and then chamber groups throughout the rest of the season.  It is intentionally being built as a Lego model, where small groups like our ROCO Brass Quintet have their own series of concerts under the ROCO brand.

AS: You’ve presented at Yale, SMU, Round Top, Juilliard, UT Austin, and the Texas Music Festival concerning your entrepreneurial approach to community-specific orchestra building. What is your approach?

AL: I call what I do “Wildcatting in the arts” which might need explaining if you are not from Texas! I meet with the performance majors and the arts management students and talk about starting ROCO.  The talks have gone in many different directions from development and board building to programming/commissioning.  However, my favorite thing to do is to talk about ROCO as a case study of reactions to my own past in performance and then have individual appointment times for students to come discuss their own ideas. I believe that orchestras should not be cookie-cutter and actually have a personality like the city in which they are created.

I love the process of connecting people together through the arts.  Each conversation, whether about music, money, or venues, is one of discovery and craft.  Every single problem in the arts can be fixed by working on personal relationships. Gratefulness, joy, and connection are our panaceas.

Chamber Music World Premiere/Commissions
22 Works for our annual Dia de los Muertos (Day of the Dead) musical and literary ofrenda. Composers write small pieces about life, death, remembrance, or other themes for an oboe, viola, and cello trio from ROCO with a singer.
We also have commissioned and premiered two other chamber works on our chamber music series we are now calling ROCO Unchambered. 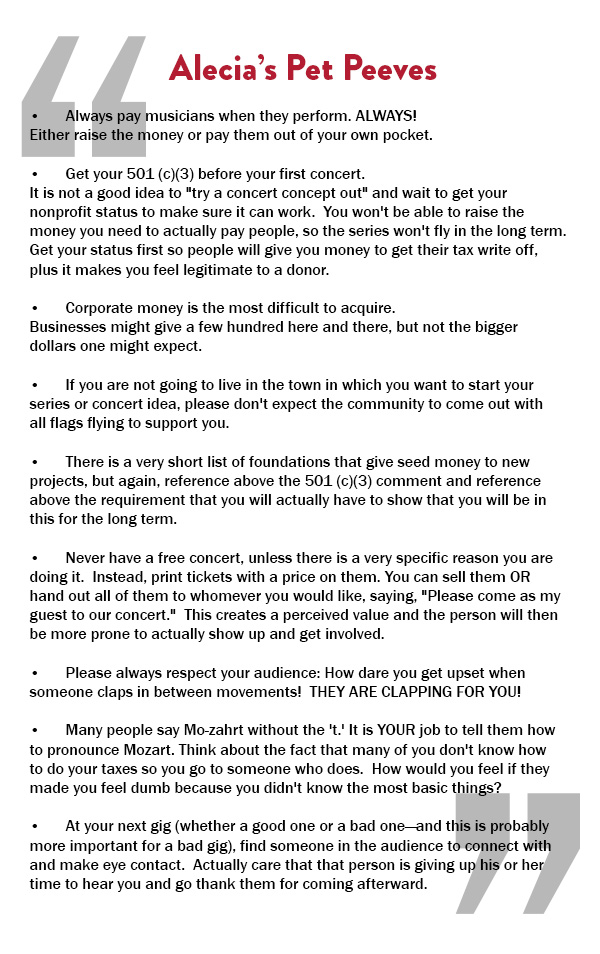