Patrons who want to hear excellent music in their communities who begin with limited monetary resources and impressive supplies of willpower, vision, and energy realize that they must act in order to preserve their favored art. While many people despair in the face of this rapidly changing paradigm, others take action. One of the most creative responses to these shifts in the musical landscape has been a renewed interest in house concerts and salon series.

More and more often, musicians find that the typical career paths they assumed they would follow are closed to them. As regional orchestras go bankrupt or de-unionize and as schools of music turn away from full-time faculty with benefit packages towards contract faculty hired at miniscule pay without any additional support, those people who want to continue performing or composing need to create their own opportunities. Patrons with impressive supplies of willpower, vision, and energy who want to hear excellent music in their communities but who have limited access to the monetary resources necessary to prop up existing institutions realize that they must act if they want to preserve their favored art. While many people despair in the face of this rapidly changing paradigm, others take action. One of the most creative responses to these shifts in the musical landscape has been a renewed interest in house concerts and salon series.

In Baltimore, these independent venues have been cropping up throughout the city. A generous local resident with a nice piano and highly sophisticated palates for both art song and culinary adventure invites singers, including many students and alumni of the Peabody Conservatory, to give dinner recitals in his home. Megan Ihnen, a recent Peabody alumna, founded the Federal Hill Parlor Series in order to bring music and art events into her historic neighborhood, a place better known for its bars and restaurants than for its culture. Many larger buildings in the areas surrounding downtown have been converted into artist collectives with studio spaces, galleries, recording venues, and large open areas for readings and musical performances. 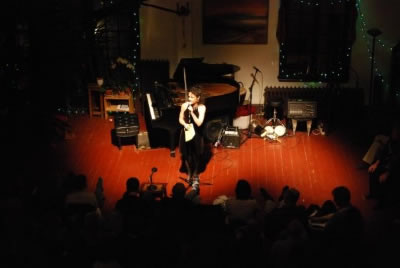 Currently in its 25th anniversary season, the venerable Salon run by the Philadelphia-based composer Andrea Clearfield—who writes beautiful music and who has one of the most open sets of ears and generous souls of anyone I know—can serve as an paragon of all the elements necessary for a spectacularly successful house series. On the last Sunday of each month during the regular concert season, Andrea welcomes about 70 guests into her downtown loft home in order to enjoy music, dance, visual performance art, sound poetry, and any other type of presentation that can fit into the ten-minute slots and onto her living room stage.

I’ve had the great pleasure of performing as part of the Philadelphia Salon on four different occasions, and have heard musical styles including classical piano, song, and chamber music, several different styles of jazz, experimental improvisation, acoustic folk, traditional Turkish song, Argentinian tango/blues hybrid, and klezmer. Andrea creates new sonic confluences as the audience drifts through these seemingly disparate musical sounds, with the juxtapositions serving to open our ears to new experiences. The overall effect of hearing so many different genres of music in such a short time is to create an atmosphere that celebrates the possibility of finding beauty in all types of sonic expression.

The other reason why I keep returning to Andrea’s Salon is because of the audience she draws. Guests arrive expecting a variety of musical experiences, hoping to hear a variety of sounds. The vast majority of her patrons appear willing to explore any avenue that appears in an artist’s dreams, disregarding aesthetic boundaries while embracing the heartfelt expressiveness they hear in each presentation. The lack of any separation between the performance space and the seating area (along with the fact that the audience sits on the floor instead of in elevated chairs) allows for an immediacy of experience, a sense of firm contact between the people sharing the evening.

While the house concert cannot replace formal professional venues, these DIY presentations can fill a void in our communities. I heartily recommend supporting your local organizations. If you don’t have any concerts in your area that inspire you, I suggest presenting them yourself. And if you’re ever in Philadelphia on the last Sunday of a month, you should check out their Salon.