Gurupoornima creates a space for social and musical interaction between students, which helps to establish a community of students of varying levels of proficiency and to inspire them to continue progressing in their studies. 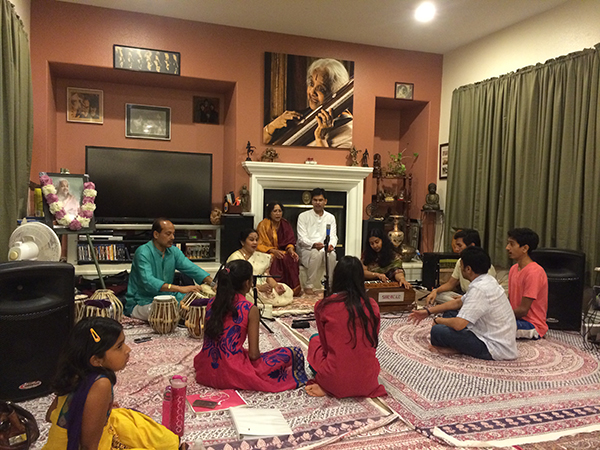 “You must come to Gurupoornima this year,” my teacher Lakshmi Shankar* said after our lesson one summer day in 2012. I had just come back to Los Angeles for the summer between the years of my doctoral coursework at the Yale School of Music, and I was studying Hindustani vocal performance with her intensively, attempting to make up months of lessons over a single summer.
“You will enjoy it—all the students perform. You really must come.” I nodded that I would be there, even though I had never heard the term before. As it turns out, Gurupoornima (goo-roo-POOR-nee-maa) is an Indian festival to pay homage to one’s teachers. The word guru, which literally translates to “the remover of darkness,” is the Sanskrit term for teacher. And the word poornima refers to a festival celebrated during the full moon, an auspicious occasion in many cultures. Gurupoornima is celebrated on the full moon in the month of Ashadh, which usually falls around June or July on the Gregorian calendar.
It immediately struck me that I could not recall ever celebrating a similar holiday in America. While America certainly has a designated Teacher’s Day, I never once remember celebrating it, or even knowing about it, either as a student or a teacher. In modern India, Gurupoornima is not the only holiday that venerates teachers: Teacher’s Day, which falls on September 5, is also widely celebrated throughout the country—often, older students will take over the classroom duties, allowing teachers to relax and enjoy the many festivities the students have planned in their honor.

In practice, the Gurupoornima celebration serves a similar place in Hindustani musical culture that a yearly studio recital does in the West. Students gather together for a long afternoon of performances, starting with short segments from the youngest beginners and ending with extensive programs by the most accomplished students. Gurupoornima creates a space for social and musical interaction between students, which helps to establish a community of students of varying levels of proficiency and to inspire students to continue progressing in their studies.

However, the central theme of gratitude makes Gurupoornima different from a studio recital in many ways.
At Gurupoornima, the teacher is the guest of honor. She will often be seated in a prominent location, both in view of the performers and the audience. Before performing, students will speak directly to the teacher, expressing gratitude for what they have learned and for her patience and dedication to their musical development. Often, students will even ask for forgiveness in advance for any mistakes made during the performance, not wanting any shortcoming in their performance to reflect poorly on the guru. (This last practice was shocking to me at first—it is common even for top-tier artists to make this advance plea for forgiveness to an audience. However, over the years, I have come to appreciate the humility and admission of vulnerability in such a gesture.)

The celebration of Gurupoornima is not limited to current students, as a studio recital would be. It is common for previous students to come back and perform for their teacher, sometimes traveling long distances to participate in the celebration. Often, students who have had more than one teacher will find a way to attend each Gurupoornima celebration—a feat that can often prove as difficult as spending Christmas with multiple sets of relatives. In recent years, I have seen that students who are too far away to attend the celebration in person will make a point of publicly acknowledging and thanking their teachers on social media—even the most famous performers do not let this day pass uncelebrated. 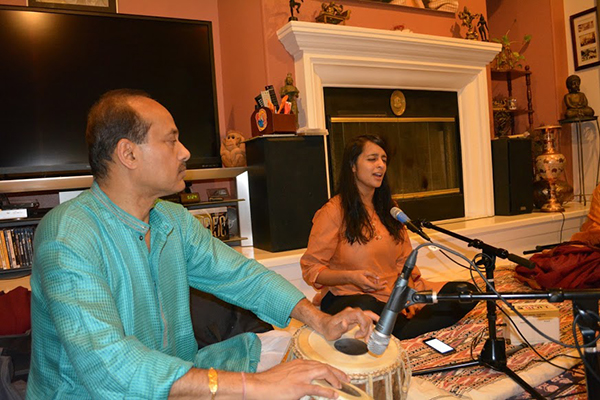 Students display their gratitude through their actions as well: the Gurupoornima event is often planned and executed completely by the students—from venue arrangements to audio equipment rental, from invitations to catering and paying for the full meal that customarily follows the performances, the students handle all the logistics.

As I listened closely to the performances at Gurupoornima that year, I felt that the focus on gratitude played a central role in the energy in the room and, consequently, in the rendering of the music itself. In my experience as a young student of Western music, studio recitals were always marked by a permeating uneasiness—perhaps a combination of each performer’s individual nervous energy and a general sense of competition between students. There would inevitably be displays of debilitating stage fright and long, tense silences during memory slips or derailed performances. Even the anticipation of these mishaps often made the less experienced performers rigid and inexpressive. In sharp contrast, the energy at Gurupoornima was lighthearted and relaxed. People moved in and out of the room easily—chatting, drinking tea, and enjoying the music together. Performances felt spontaneous and expressive, with even the youngest students smiling shyly into the audience as they sang.

Recent research substantiates the claim that it is impossible to feel both nervous and grateful at the same time—that the brain is incapable of processing both sentiments simultaneously. As each student thanked Lakshmiji** and aimed to honor her by performing well, the focus moved away from their desire to impress and dazzle, and shifted onto their effort to honor her. Even when mistakes were made, Lakshmiji warmly encouraged her students to continue, visibly proud of each one. Consequently, I found myself focusing not on the accuracy or vocal dexterity displayed in the performances, but on familiar turns of phrase that I began to recognize in many of the performances—I heard her characteristic vocal style emerging uniquely through each student. It was the best testament to her careful and thorough teaching.


As I listened to Lakshmiji’s students sing that afternoon, I began to wish that we also celebrated Gurupoornima in the West. I thought of some of my most trusted composition mentors, who have gone above and beyond for me—the teacher who made time to call me from a competition he was judging in Europe to offer support for the orchestra piece I was struggling to complete, who would always find time for me even in the busiest moments of his wildly successful career. There was also the teacher who accepted me into her studio when my confidence was shot and I was almost ready to quit composing, who would stay late in New York City to delve into my work (even though I wasn’t actually a student at the school where she taught) and who worked patiently and deliberately to rebuild my understanding of my own creative process. These teachers took the time to understand my ideas better than I understood them myself and helped me render them into music when I, at times profoundly, doubted my ability to do so. I truly wished there was a day on the calendar when my colleagues and I could organize performances to honor them, to celebrate the boundless energy they poured into each one of us.

Sadly, this year’s Gurupoornima was a more somber affair: Lakshmiji passed away in December of 2013, at the age of 87. As her students remembered her and thanked her, everyone in the audience choked back tears. I was especially heartbroken because I had so looked forward to studying with her full time—she passed away just months before I was able to move back to Los Angeles. But as I listened to her students perform, I heard those same characteristic strains of her voice coming through each of them. It was as if she was in the room, singing to us.

About halfway through the afternoon, one of her master students asked me if I was planning to sing something. Truth be told, I had barely practiced after her death. I just couldn’t bring myself to listen to the recordings of our lessons and hear her voice. But her other students encouraged me. “It’s about showing her your gratitude for her teaching. Sing a little bit, just to honor her.” For all the years I had spent immersed in practicing Hindustani vocal music, I had never sung a purely classical performance for an audience of peers. It was my first time. And it was magical. I felt my voice weave through the phrases, remembering them as she taught them to me, hearing them in her voice and executing them in mine. I missed her intensely, but even more than that, I was so profoundly grateful for every moment I had spent in her presence.

*
Readers, have you ever wished there was a practice from another musical culture that could be incorporated into Western musical culture? Have any of you regularly celebrated your teachers? What did you do? Please respond in the comments below!

* Lakshmi Shankar was one of the most prominent Hindustani singers of her generation. Recognized in the West as famed sitar player Ravi Shankar’s sister-in-law, she sang in the 1982 film Gandhi, and recorded 19 solo albums during her career.

** the suffix –ji is a marker of respect in Hindi 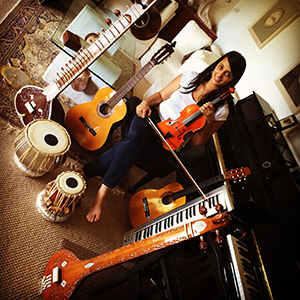 Indian-American composer Reena Esmail “creates richly melodic lines that imbue her music with the heights of lyricism, balanced by winning textural clarity.” (AAAL) A graduate of Juilliard and Yale School of Music, and a recent Fulbright grantee to India, Esmail’s work draws together elements from Western and Hindustani (North Indian) classical traditions. Esmail’s works have received honors from The American Academy of Arts and Letters and ASCAP, and have been performed throughout the United States, in India, and abroad.