Hello, My Name Is: Harnessing the Composer Network
NewMusicBox
Written By

Hello, My Name Is: Harnessing the Composer Network

A large part of this whole program is about relating to those who are presenting or hearing your music in a positive way, and learning how to benefit yourself through good communication. 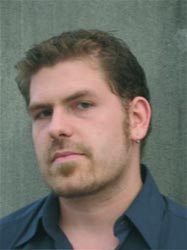 Everyone said this week was going to tire me out. It turns out they were right. It’s not that the hours are that grueling, but they’re packed full of information. Plus, if you’ve ever met me you won’t be surprised to learn that I found time for not one but two beers with fellow composers at lunch; maybe not the best idea given the amount of ideas that flew at us when we returned for the afternoon. Nonetheless, it was a massively enjoyable first day at the institute.

We heard lectures from two incredibly knowledgeable speakers, both experts in their field. Evans Mirageas, artistic director of the Cincinnati Opera and director of artistic planning at the Atlanta Symphony, implored us to adopt the perspective of those in the retail industry, reminding us that networking is an essential tool and then comparing a successful composer website to a successful department store. (Depressing but resonant.) Only you can take charge of building your own audience, he seemed to be saying—not so much “give them what they want to hear,” but “tell them why they can’t afford to miss what you’re offering”. Composer Mary Ellen Childs dropped truth bomb after truth bomb in an extremely helpful seminar on grantwriting, something that has baffled me for years. (Turns out it takes a lot of hard work—that was my problem all along.)

We also filmed short interviews for the Minnesota Orchestra’s website, introducing ourselves and our pieces. This happened early in the day, and was a sober reminder of how important it is to be ready with a focused explanation of what you’re trying to do in music. Clearly, a large part of this whole program is about relating to those who are presenting or hearing your music in a positive way, and learning how to benefit yourself through good communication. And clearly, it sucks to feel that you are not as articulate as you would like to be. (Me: “Yeah man, it’s, like, about music, you know what I’m saying?…word.”)

The highlight of the day, as you might expect, was listening to the music of the other participant composers, five of whom presented their work.

Antonio Carlos DeFeo, a graduate of my alma mater, the Manhattan School of Music, played What’s That I Hear?—a mystifying little song for mezzo-soprano with orchestra, commissioned by the Westchester Symphony and set to the words of an 11-year-old poet. This work glistened with transparent orchestration and a surprising interplay between the vocal line and an electronic part taken from the poet’s reading of his own work.

Justin Merritt played Dervish, recently premiered by the orchestra over at St. Olaf, where he is a professor of music. This was a rousing “concert opener,” brief but exciting, based on the great Sufi tradition of Dervish music. Essentially the entire piece is a gradual and continuous crescendo, an impressive feat that must have been difficult to pull off but a blast to perform.

We got a taste of Andrew McManus‘s Calvary, a song cycle for baritone and large chamber ensemble set to a perplexing collection of texts and described by the composer as an “anti-anti-war” piece. I was sorry we weren’t able to hear the whole thing. Andrew is a student at Eastman.

Wang Lu, just finishing up a doctorate at Columbia, played Siren Song, which bristled in a tight performance by the ever-impressive International Contemporary Ensemble. Although she drew laughs when she admitted, “I like Stravinsky too much,” her music rang out with originality, possessing a driving energy and at times buoyant humor. She has developed a unique musical transformation of Chinese speech patterns using instrumental glisses that pass rapidly around the ensemble. Coupled with her particular harmonic language, this creates a curious and edgy sound.

David Schneider, a recent graduate of Indiana University, played us excerpts from a few works—a choral piece set in Latin and a piano quartet based on the music of the ars subtilior school of the 14th century. The third, Machines for solo piano, dealt with machine-like processes and is perhaps closest in spirit to his orchestral piece that will be played on Friday’s program, Automation.

Ming-Hsiu Yen and I will present our music to an audience of young patrons of the orchestra tomorrow.