Hail to Thee, and Sing Out!

Congratulations! You have made it to the end of Education Week at NewMusicBox. And, as with any educational rite of passage, for your time, trouble, and effort, you deserve that privilege of scholars everywhere: a commencement and the singing of an alma mater.

Congratulations! You have made it to the end of Education Week at NewMusicBox. And, as with any educational rite of passage, for your time, trouble, and effort, you deserve that privilege of scholars everywhere: a commencement—and that staple of commencements, the singing of an alma mater.

It is not easy to find a phrase that even Google doesn’t recognize, but “modern music alma mater” manages to bring up no exact matches. So, I took it upon myself to write one. It’s tonal and atonal, full of compositional niceties yet rubbing a parallel octave and fifth in your aural face at the beginning of every line. Something for everybody, in other words. 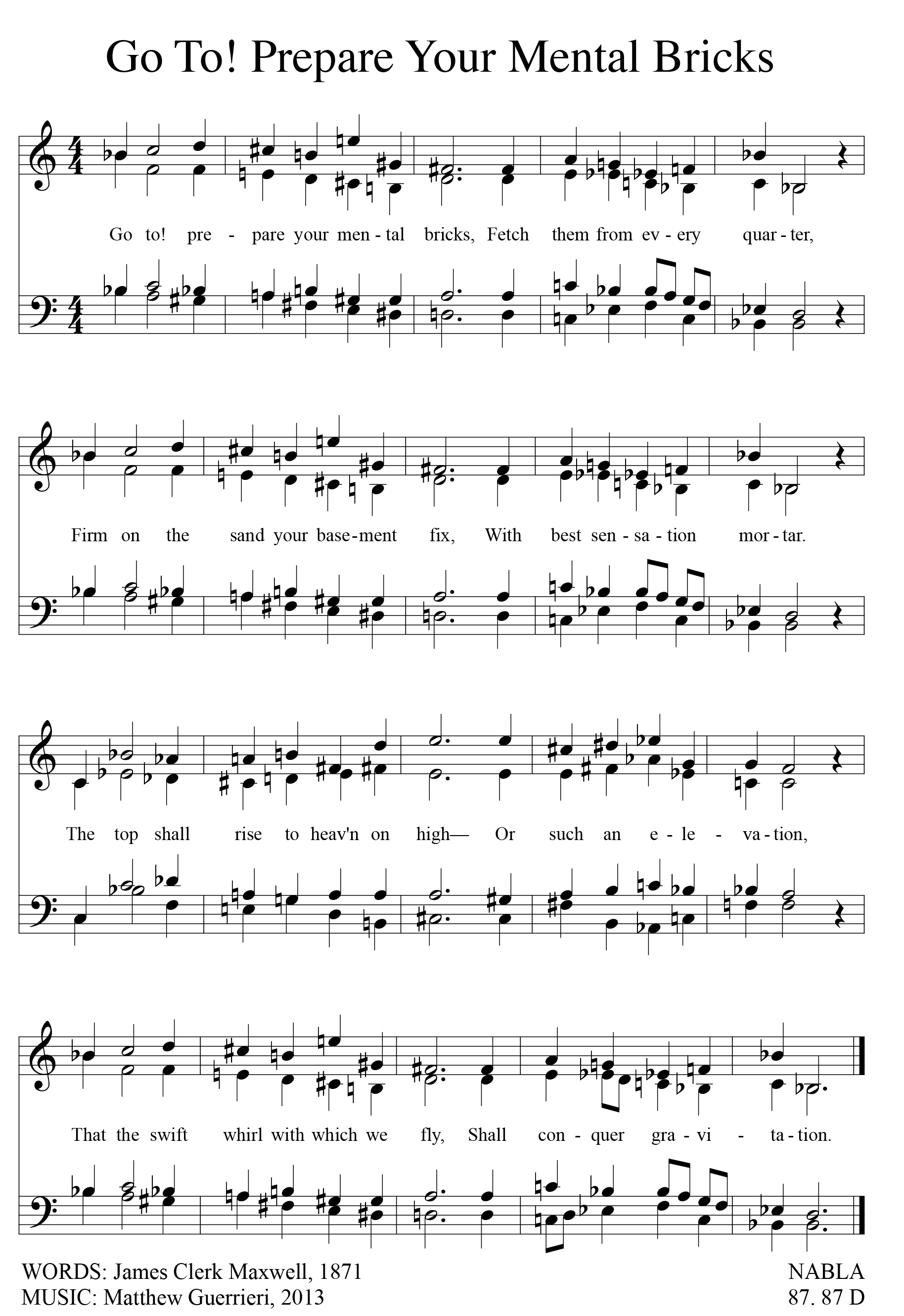 The text is, indeed, by the father of electromagnetism, James Clerk Maxwell. In his spare time, Maxwell liked to write satirical science and mathematics-themed poems. This text comes from the final stanza of one called “To the Chief Musician upon the Nabla: A Tyndallic Ode,” which Maxwell read to a meeting of the Red Lion Club (whose meetings corresponded with those of the British Association for the Advancement of Science). The Tyndall of the title was John Tyndall, a London physicist whose public lectures and books made him one of the more prominent Victorian popularizers of science—the Ode is a satire of Tyndall’s talks.

The “Chief Musician” of the title, though, is Peter Guthrie Tait, a mathematical physicist and lifelong friend of Maxwell’s. One of Tait’s specialties was quaternions, an extension of complex-number mathematics into three-dimensional space (a precursor of modern vector analysis) that was first described by William Rowan Hamilton in the 1840s. One of the more important symbols in quaternion mathematics is an inverted delta—∇—which serves as a kind of all-purpose differential shorthand in vector calculus equations. According to Lord Kelvin, it was Maxwell who jocularly dubbed the symbol nabla, since the inverted triangle looked like a harp: the word is the Greek term for the nevel, an ancient Hebrew lyre. A mathematical harp that maps complex space—not an entirely inappropriate emblem for a new music anthem.