Goofing off, Perfected: Lessons from Fluxus

Fluxus and their Event Scores point to our human condition in a way that is wildly dynamic. The score is an invitation, a call to action, and first-hand study and performance of these scores would be healthy for any of us.

In my columns so far, I have explored different ways of integrating fields outside of music into our work, including alternative educational models and institutions, as well as considered the ultimate purpose or function of our work. In this, my final post for the month, I’d like to recap a personal experience on the periphery of traditional music.

This summer, I’m creating a collection of performances at the Walker Art Center surrounding an exhibition of Fluxus works by George Brecht, Yoko Ono, Allison Knowles, and many others. I recently sat down with Sarah Schultz, curator of public practice at the Walker, and a group of local artists, and Sarah asked a seemingly simple question: what is Fluxus? What followed was a conversation where simple statements became instantly complicated. For example, Fluxus is an insular form speaking to the art world’s nuanced concepts of the object, vision, and experience. Simultaneously, Fluxus is an open initiation to life and living, enabling the public to take the scores into their own everyday. These inherent contradictions are perhaps summarized best by Hannah Higgins (academic and daughter of Allison Knowles and Dick Higgins) as she begins her book Fluxus Experience. “Since Fluxus artists never seem to agree on anything,” she acknowledges, “Fluxus has become ‘a pain in art’s ass,’ in the words of Fluxus artist Ben Vautier.” Now, I believe that we can hold two contradictory ideas in our heads without passing out, but it does become difficult to explain exactly what Fluxus is and isn’t. If you were to say one true thing about Fluxus, you could say that Fluxus is about the primary experience itself. The vehicle for exploring the now moment in Fluxus is through the Event Score or the Fluxkit.

Event Scores involve simple actions, ideas, and objects from everyday life re-contextualized as performance. Event Scores are texts that can be seen as proposal pieces or instructions for actions. The idea of the score suggests musicality. Like a musical score, Event Scores can be realized by artists other than the original creator and are open to variation and interpretation.
– Allison Knowles

I consider Fluxus a shared cousin between the music and visual art world. It is fascinating to see how treatment of the scores differs because they are kept by private collectors or at art institutions like the Walker. The scores here are handled with gloves, cautiously maneuvered with a small stainless steel spatula (so as to not bend the corners), and kept in a humidity and temperature-controlled space. When I think about the thousands of scores kept by orchestras, or the ones I have at my studio, I can see a real contrast in both treatment and use. What if Fluxus scores were kept by orchestras, lent out to groups that needed them, rented, and written on?

Although I’ve researched the scores through books, it was grounding to visit the scores in person. (Primary experience wins again!) Fluxus scores were released in editions like Brecht’s Water Yam, Ono’s Grapefruit, and Kosugi’s Events. The scores themselves are casual and airy. Easy and smart. They seem a bit haphazard in a lovely way that feels comfortable and domestic. In looking at Water Yam, a collection of 98 scores by George Brecht, you can imagine George picking up his scores from the printer and sitting down to cut them out with a pair of scissors, all different sizes from tiny to quite large. The pieces are kept atop one another in no particular order inside a small plastic box with a sticker on top. Seeing the scores in person helped me to envision the score as a more dynamic object and imagine why a score is held so central in Fluxus works. 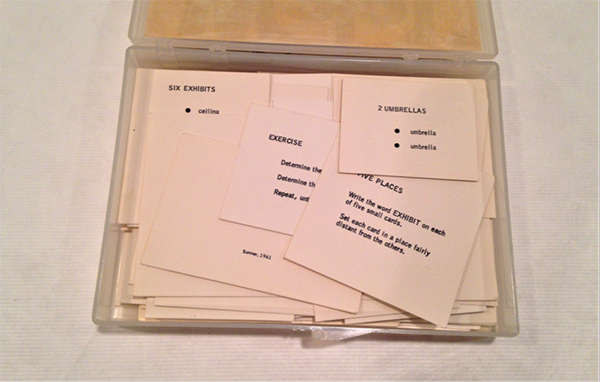 Creating a score is a labor. To create a score, we have to envision ourselves as someone uninitiated with our ideas. We put ourselves in the shoes of another person—an act of empathy—and we offer an experience to anybody who would invest time to decode the document and act it out in real time and space. A score is a set of rules for engagement. It is the same for a recipe, a manual, or a blueprint. Scores come with a contract between the composer and the performer—a contract that could be understood as rules for interpretation or etiquette for the creation of a performance. This is a vernacular that has changed over time in music, different for each generation, although it feels as though the door was blown wide open in the 20th century.
To the Fluxus composers, a score is a narrative experience that exists in the mind. 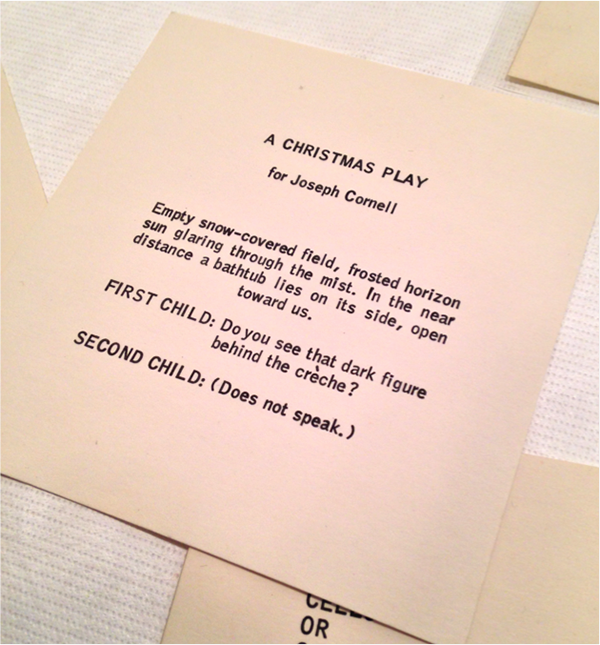 from Water Yam by George Brecht

A score is an instigator that weasels its way into your life, as in Milan Knizak’s Cat (1965) which reads, “Get a cat.”  A score is a document of a poetic event already past, a connection to something immensely human. 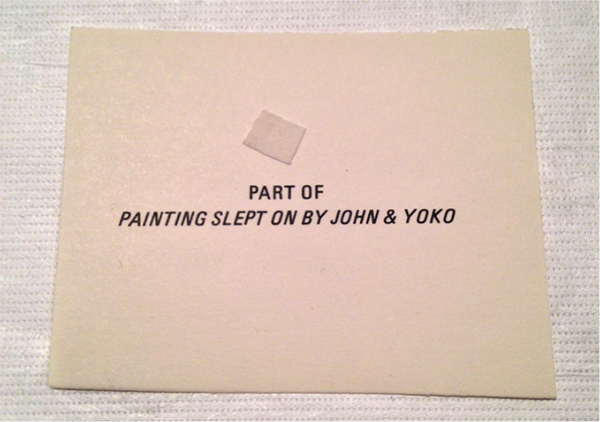 From Yoko Ono’s 1971 edition of Grapefruit

A score is a tool, multi-faceted and evolving over time. A score invites performance, a presence, and/or goofing off.

‘Goofing off’ is a quality that Fluxus artists certainly honed in performance, and…there are positive qualities to goofing off. Goofing off requires developing a fine-tuned sense of what it means to pause long enough and distance oneself far enough from worldly objects and events to recognize their illusory dimension and thereby reinvest the world with wonder. In order to really goof off well, the instrumental sense of purpose so deeply ingrained in Western ego and epistemology must be abandoned.
– Kristine Stiles “Between Water and Stone” from the Walker’s 1993 catalog In the Spirit of Fluxus

This is the thing that surprised me about the Event Scores: the works are a direct invitation to play, as well as an invitation to presence. Serious focus and purposeless play are both intensely human and increasingly rare. Goofing off is another form of presence, or rather a complete lack of presence when we abandon our veneer to embrace a purposeless sense of wonder. We goof off and are human. In this way, Fluxus and their Event Scores point to our human condition in a way that is wildly dynamic. The score is an invitation, a call to action, and first-hand study and performance of these scores would be healthy for any of us.