Giving Voice: (Re)Discovering My Own

While campers experienced hiccups along the way, there was none of the insecurities, impostor syndrome, or existential angst that impairs so many young composers, including myself. 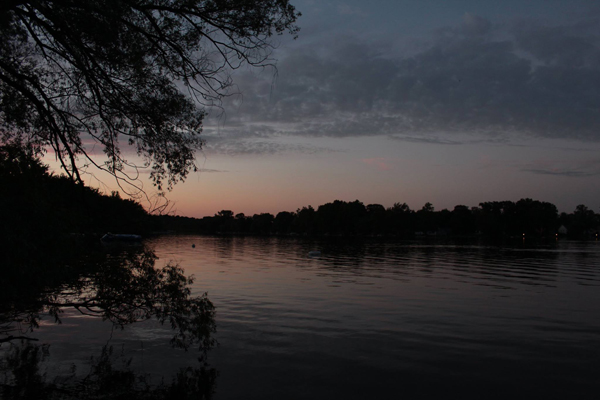 A view from the Lake of the Woods and Greenwoods Summer Camps (photo by Chris Cresswell).

That’s probably not what the parents of a 26-year old want to hear. Then again, I probably gave them a lifetime’s worth of bad news half a decade earlier with “I’m going to be a composer.” I’m currently in my second summer working as a teaching artist at the Lake of the Woods and Greenwoods summer camp. This work has had a profound impact on my own compositions and songwriting on a both spiritual and practical levels.

Prior to starting work as a teaching artist, I worked at Boosey & Hawkes in New York City. While this was a tremendous experience in which I learned about the music industry, listened to more contemporary music than I thought possible, and met, more or less, all of my musical heroes, by the end of my time there my relationship with music, by necessity, had become more about business than the creative practice.

In working with campers at Lake of the Woods and Greenwoods family of camps, I rediscovered my love for writing music. The young campers offered up creativity in its purest form. They were interested in making their own music without consideration for genre, marketability, or careerism, but rather with the intent of simply writing the music that they wanted to write. There was little angst associated with their writing process. While campers experienced hiccups along the way, there was none of the insecurities, impostor syndrome, or existential angst that impairs so many young composers, including myself. Rather, I found that all of the campers were open to suggestions, willing to learn, and ready to experiment as they discovered what the recording studio—and they themselves—could do. This caused me to reexamine my own self-labeling. Prior to last summer I’d always viewed myself as a composer who happened to write songs. I hid my songwriting from my fellow composers out of a fear that I wouldn’t be taken “seriously” as a composer. Spending a summer writing songs with campers resulted in me focusing more on my own songwriting craft.

This spiritual re-awakening coincided with a broadening of my sonic palette. As I mentioned in previous posts, campers shared their favorite songs, exposing me to a wide range of pop songs and entire genres that I was previously unfamiliar with. While I won’t be making a dubstep album anytime soon, I’ve fallen in love with the synthesizer sounds associated with the genre. Rather than writing folk songs with voice and a few acoustic instruments, I’ve begun to utilize the entire studio in my songwriting and recording process. This summer I’m recording several new tracks for future use, including the song embedded below, Advertising the Dalai Lama. What started as a simple folk song on an acoustic guitar has become a more nuanced piece of music. The process of creating this song showcases the cross-pollination between songwriting, composing, orchestration, and studio engineering, combining sounds from hip-hop, dubstep, and pop music with my own aural aesthetic which draws upon the work of Meredith Monk, Brian Eno, Cage’s Imaginary Landscapes, and contemporary electro-acoustic works.

When developing the instrumental section of the song, I approached the synthesizers the same way I approach orchestrating an art song. Rather than having a battery of strings, winds, and percussion, I have an array of electronic sounds, each one serving a specific function. Even though my instrumentation involves sounds labeled “Noizette,” “Scorched Earth,” “Dirty Wobbler,” “Swedish Ninja,” and “Mound of Wires,” I still approached the individual voices with the lessons I learned from Walter Piston’s Guide to Orchestration. The end result is, hopefully, a reflection of my previously bifurcated artistic selves.

On a practical level, working in a recording studio 14 hours a day has made me adept at writing and creating music at a quick pace. This summer, I orchestrated the middle instrumental section of a Broadway-style tune in a brief 45-minute window. Working at such a fast pace naturally means decisions are made without hesitation. There is no time to agonize over note choices. If it doesn’t work, we’ll simply try again; there is no need to fear getting it wrong. This increase in technical skill has helped with my work in sound installations and electro-acoustic work.

Last year, while working in the studio, I built the foundation for I was walking home…or at least I thought I was walking home… This sound installation created an imaginary soundscape by combining sounds from my last day living in New York City with sounds from my hometown of Cazenovia, New York, and electronically generated sounds. As I spent most of my days and nights in the recording studio, I was able to experiment with recording acoustic instruments and manipulating them to create sonic textures. The studio has become a part of the composition process, where ProTools waveforms are as valid as notation on a staff. This summer I’m combining these processes in a new work for the San Francisco-based group Wild Rumpus. My new work for them, From Dreams, We Emerge, combines electronic textures built inside the recording studio with live instruments.

The natural beauty of Lake of the Woods and Greenwoods, which is situated in Decatur, Michigan, a rural town in southwestern Michigan, has proven to be an alluring muse itself. I spend my summers living on a quiet campground next to a picturesque lake. On a clear night you can see a myriad of stars while fireflies seem to dance in the open fields. This is a far cry from my previous life living in an illegal basement sublet in Queens. This broad, open expanse has had an equal impact on my writing, be it acoustic compositions, electro-acoustic works, or songwriting. I’ve spent the last year working on an orchestra piece, The Decatur Fragments, inspired by the birdsongs I hear each morning while walking from my cabin to the recording studio.The work for Wild Rumpus, From Dreams, We Emerge, is influenced by this open expanse; it is a slow moving work with a dream-like quality, again influenced by my open surroundings. 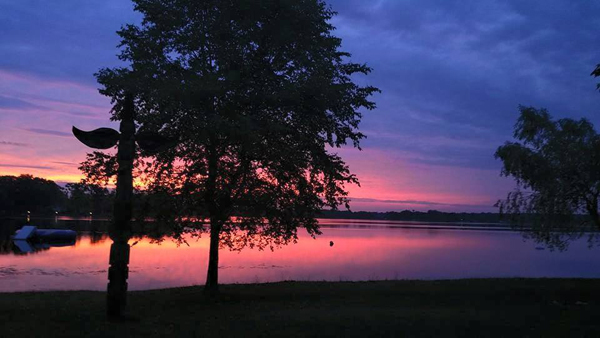 Another view from the Lake of the Woods and Greenwoods Summer Camps (photo by Chris Cresswell).

Working as a teaching artist is a continual two way conversation. While my goal at the onset was to teach songwriting and recording, I ended up learning as much, if not more, myself. This work has reinstated my love of creativity and has demonstrated time and time again, the power of self-expression, in all of its forms. I’ve witnessed campers gain confidence as they’ve written their first songs, sang in front of their friends, and learned that they have the power to create themselves. In a culture where so much is dictated to our children, giving voice to their artistic ideas instills in them the belief that their thoughts, their ideas, and their concerns matter, that someone is listening to what they have to say and is providing a platform for them to say it. Working with a teaching artist shows that creativity can be a part of everyday life. Most of the music young people hear is mainstream pop, seemingly coming from this “other” faraway place. When students have a chance to work with a teaching artist, they have the opportunity to share their song, their dance, their poem, their painting, or whatever else they can imagine. What I hope to impart as a teaching artist is that creativity is not only possible but is encouraged.