It might be more accurate to consider Journey as a musical composition with interactive video element, rather than as a barely challenging game with a fantastic and lovingly created underscore.

Last week I had a welcome chance to discuss the current state of electronic gaming at Washington, D.C.’s Smithsonian Museum of American Art, as part of a concert presented in conjunction with the Smithsonian’s current exhibit about the past and future of video games. It was great to see so many young, new faces in the audience for a concert of new music—including many young people who are choosing to play games that reward creativity, exploration, and kindness rather than games in which the solution to every problem is more violence.

There are far too many video games that indulge exactly this kind of near-pornographic violence. And sharing the panel with me at the Smithsonian were other colleagues whose similar disgust had rendered them highly skeptical of the genre’s potential for quality interactive experiences, much less the potential of video games to ever approach “true art.” Knowing how the nascent genre of film was likewise derided at its outset as incapable of reaching the heights of the theatre, I’m more optimistic about the evolution of video games; after all, film had completely emerged as a valid and expressive genre before the middle of last century, and the fact that there are a lot of movies like Transformers doesn’t in any way impinge on the greatness of Citizen Kane.

For a distillation of all that is promising, unique, and breathtaking in the video game experience—an experience in which gameplay, art, and music weave together on an almost operatic level—the most hardened skeptic might do well to spend an hour or two with Journey (a new game released March 13 by upstart developer Thatgamecompany and available for download, frustratingly, only on the PlayStation Network). 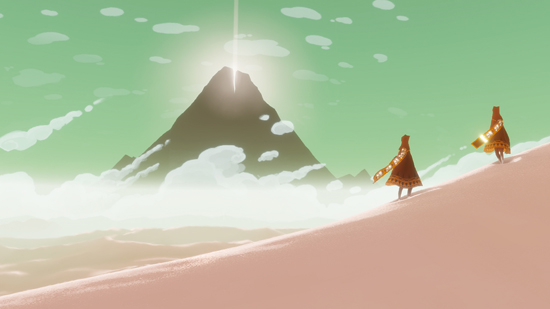 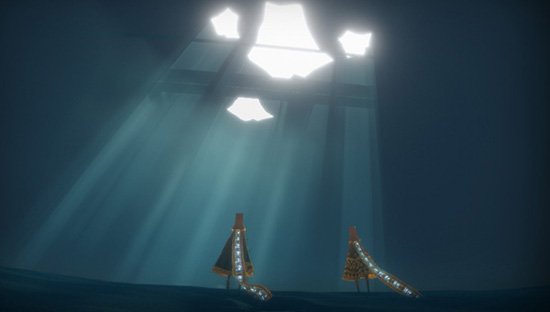 According to the game’s own website, “Journey is an interactive parable, an anonymous online adventure to experience a person’s life passage and their intersections with others.” The game uses no speech or text to tell its story, which begins as the player assumes control over a cloaked avatar, adrift in a vast and shifting desert with only one visible landmark—a looming mountain—that hangs over Journey’s frequently empty, forlorn spaces; this mountain exercises an incredible magnetic pull on your experience (though the game never explicitly instructs the player to head there). As the player traverses a vast terrain tinged with lonely, alien beauty, they will interact with a narrative that is ambiguous and abstract, but at the same time surprisingly accessible and emotional. Even without a literal storyline, it’s difficult not to experience a plethora of emotions while playing Journey, including joy, amazement, fear, shame, and sadness. Composer Austin Wintory deserves much of the credit, having created the haunting, mystical score that perfectly compliments the game’s baren, minimalistic spaces. The music reacts to the player’s actions, and it’s also possible to “sing” a note of the game’s main theme—the only way to interact with the rarely encountered other player, who may relish the companionship or ignore other travelers at will. Given that Journey’s actual gameplay challenges are slight and obstacles rare (lending the entire experience an inexorable sense of flow), it might be more accurate to consider Journey as a musical composition with interactive video element, rather than as a barely challenging game with a fantastic and lovingly created underscore. The consistent inventiveness and emotional import of Wintory’s score helps create an immersive experience that, amazingly, holds appeal for the curious child and grandparent alike. (Pity that there is no local multiplayer mode, and further curses that the indie developer’s contract with mega software giant Sony restricted the game to release on a single gaming console; a PC/Mac release would have certainly helped Journey reach curious non-gamer adults who are unlikely to own a video gaming console).

“Journey is about making you feel small in relationship to the world around you,” says Kellee Santiago, co-founder of the game’s developer. “We’re about how a game makes you feel: the opposite of what the mainstream is focusing on,” says co-founder Jenova Chen, whose previous releases fl0w and Flower were thumbnail sketches for the immensely more satisfying Journey. 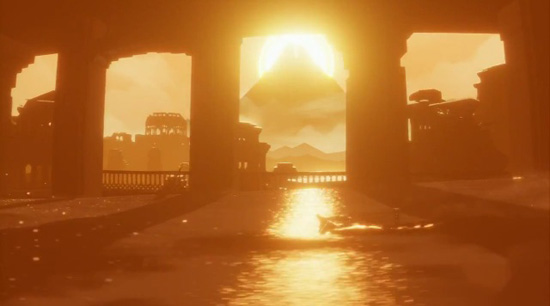 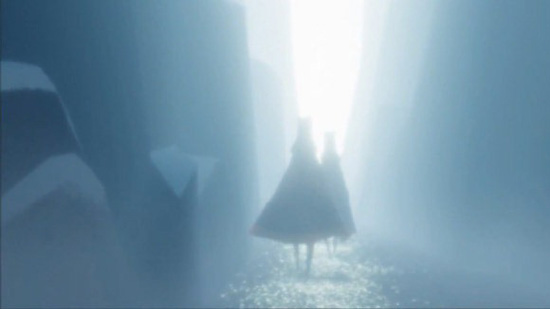 In an age marked by the desire to manipulate and control almost everything (and an absolute disdain for aspects of the world that we cannot control), the gift of feeling small again—the feeling of being in the presence of something mysterious that beckons from outside of ourselves, something that commands awe and eludes our understanding—is worth plugging into. The harmonious blend of music, art, and gameplay in Journey (while a bit light on the head scratching puzzles preferred by veteran gamers) is definitely one of the most memorable musical experiences I’ve had in many months, informed by the joy of movement and the curiosity of discovery. A game like Journey excites my musical imagination and makes me think we are headed for a new kind of interactive experience worth pursuing.