Boston’s $1.5 billion arts industry is teeming with life, from the heady and formal to the gritty and DIY. Will Roseliep plunged into the ecosystem and brought back this report. 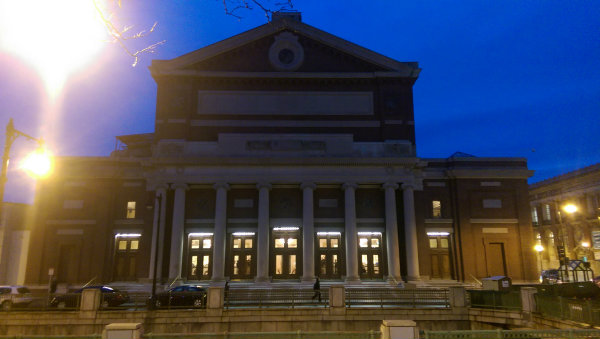 If you come to Boston to see only one orchestra, you’ll come for the Boston Symphony. The BSO is as much a part of Boston’s identity as the Red Sox, lobster rolls, and organized crime.

The orchestra operates out of Symphony Hall near downtown, and on nights when the fluorescent “BSO” sign lights up, the people flock to it.

Right now Boston classical fans are very high on new BSO music director Andris Nelsons. Given the right timeline, the right money, and the desire, Nelsons could be on pace for city legend status like Russell or Bird, Ted Williams or Bobby Orr. L.A. has Gustavo Dudamel; Boston now has Andris Nelsons.

The BSO can be pricey, but the orchestra makes exceptions for younger people, and so for only $20 each my friend and I got into a show. We weaved our way through the patrons, ushers, and classical nerds and found our seats. My friend was put on immediate warning by the woman next to him: his leg was too far to the right. Noted. People were swarming. The official capacity of Symphony Hall is 2,625. This show wasn’t a sellout, but it was close. 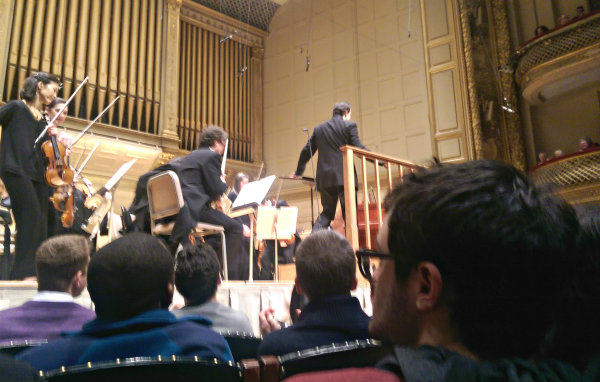 They played a world premiere organ concerto by Michael Gandolfi and Mahler’s Sixth Symphony. Afterwards the crowd roared. Even after a long stint wedged into cramped chairs (think economy-class plane seats) everyone was ecstatic. That triumph carried over into the lobby and out to the street as brave patrons played Frogger with Massachusetts Avenue traffic. 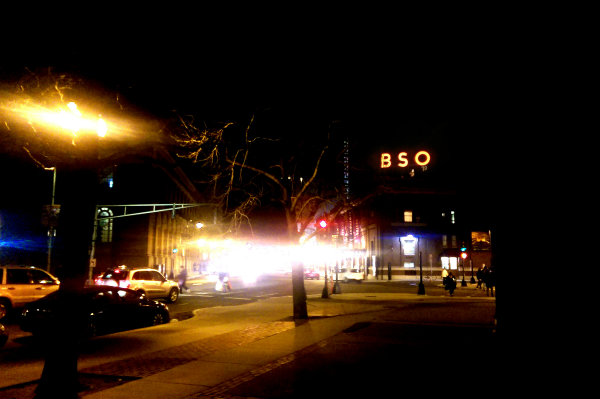 There will always be a need for this dressed-up symphony experience, but that’s just the beginning of the story in Boston. Outside the walls of Symphony Hall, an impressive and diverse classical scene has shaped up on its own.

The city can only stamp its name on one orchestra, and that deal was done in 1881. But other organizations—orchestras, chamber groups—are doing Boston proud, taking risks and reinventing the audience experience. The product being cooked up in these rogue classical laboratories is flooding the streets. There’s never been a better time to be a classical fan.

*It’s hard to get an accurate count of the orchestras and chamber groups in metro Boston since many fly under the radar. Some habitually shift personnel, others work intermittently.

You can start with mainstays like the Boston Modern Orchestra Project, and the wildly popular Video Game Orchestra. Other groups are in a building-and-expansion phase. The Boston New Music Initiative prizes works by living composers. Pro Arte Chamber Orchestra of Boston is a self-governed freelance collective. A Far Cry is an edgy ensemble with peerless talent and ambitious programming.

When you add in pick-up orchestras, and informal and invite-only arrangements, you begin to get a sense of the city’s appetite for classical music.

The first is the willingness of the audience to pony up. Attendees spent $450 million beyond admission price at museums and shows. The second factor as it relates to classical music is the talent pipeline. The area is home to top-flight schools like New England Conservatory, Boston Conservatory, and the Berklee College of Music. The city is flush with talent. Orchestras hire young guns with musical chops for days. Students, in turn, get on-the-job mentoring.

I decided to see firsthand how it all worked. I dropped in on a show where ace percussionists tackled brand-new music; a choral concert where the music was served with a side of social justice; and a house show where the Bach and the PBR flowed like water.

New England Conservatory is housed just a block from Symphony Hall. It’s backed up against the Orange Line train tracks, and sits so close to the adjacent YMCA you might assume they’re housed in the same building. 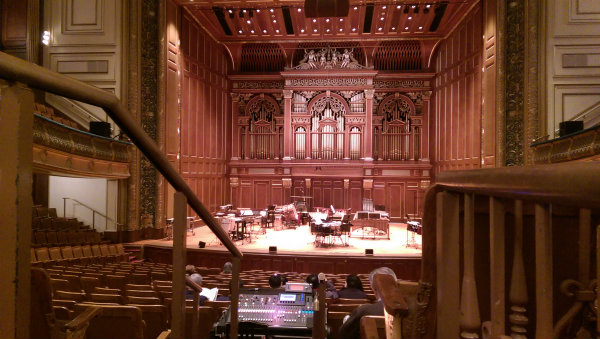 On this rainy night—we had over nine feet of snow this winter; rain will never again faze us—a hundred people settled into wooden, leather-backed chairs in Jordan Hall to hear the NEC Percussion Ensemble.

We started with a flourish: the first movement from Nebojsa Zivkovic’s Trio per Uno. The piece was unrelenting, the playing inspired.

Next was Steve Reich’s Six Marimbas. The performers were gleeful and reckless. (Were they shooting 5-hour ENERGY backstage? Only the stagehands could say for sure.) Reich’s music can sink even steely performers, but these players barely broke a sweat.

The focal point of the night was composer Larry Wallach’s Winter Music. It was a world premiere, and there was a lot to like:

Wallach evokes the long slog of winter with uneasy patter, interspersed with moments of space and calm. In the second movement Wallach had players hoarsely whisper lines into the aforementioned headsets from Wallace Stevens’s famous poem “The Snowman.” (“One must have a mind of winter/ to regard the frost and the boughs/ of the pine-trees crusted with snow.”) 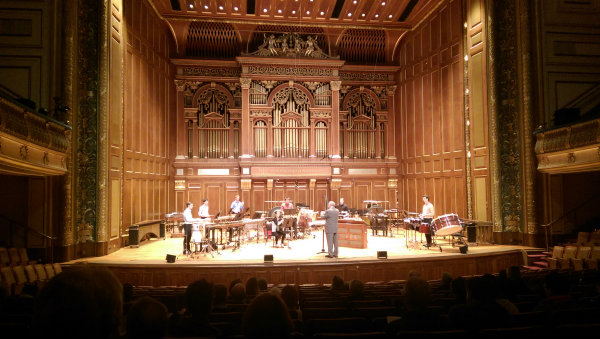 In the third movement Winter Music found its groove with banging unison parts. When the players clanged to a finish there were woops, hollers, and applause. That was just the end of the first half.

By the end of the night we’d heard an impressive program highlighted by a world premiere. The show was driven by young talent with an appetite for tricky music, and an impulse to get it note-perfect.  It was free, and exciting, and there would be more shows like it before the week was out. 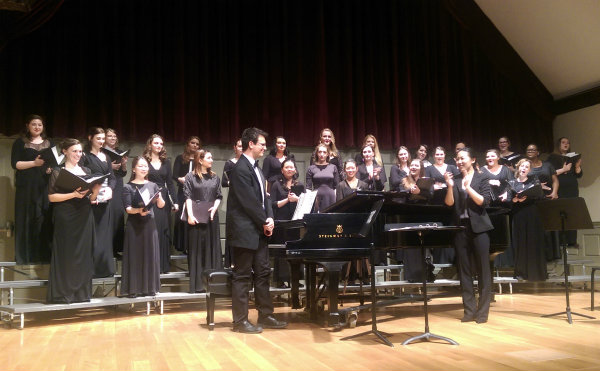 Like many cities, Boston has a diversity problem in its classical scene. There are too few people of color in orchestras, especially considering Boston is a majority-minority city. The problem isn’t just racial or ethnic underrepresentation, but social, economic, and geographic divisions, too. So it was a little shocking to see that problem addressed, at least in part, at a show I went to at the Boston Conservatory.

This Boston Conservatory Women’s Chorus emanated pure power, and you would’ve gotten your wig blown back sitting in the first few rows. The concert’s premise was the intersection of Shakespeare’s written word with music written about the Bard himself. So we heard James MacMillan’s Sonnet, Amy Beach’s Three Shakespeare Choruses, as well as Brahms’s Vier Gesänge with harp and double-barrel French horns.

But the swerve came when the BCWC exited mid-set. Co-conductor Daniel Mahoney told the crowd that groups like his needed to get out of their “ivory towers” and work outside the conservatory walls. Mahoney said BCWC had much to learn from up-and-coming outfits. With that he yielded the stage to the Boston City Singers. 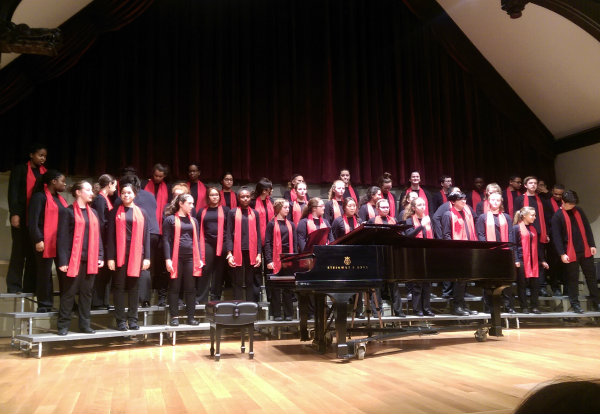 The City Singers were young and fearless, and their mission statement—“training and inspiring the musician…to support personal development, celebrate diversity, and foster good will”—reads like a blueprint for Boston’s future arts scene. They did a traditional Maori song, and “Gloria” from György Orbán’s Mass No. 6. They even did show tunes. It was bizarre and glorious.

Boston is a city of tradition. There is a deep vein of historical religiousness that carries through to the present. We’ve still got “blue laws” on the books to ensure Bostonians’ moral compasses point true North.

But there’s an equal measure of revolutionary spirit here. Phony or not, we’re all a little taken with the original rebels, those 18th-century punks that talked a good game about liberty and freedom.

For a minute I saw both sides at once. I’ve never been to a show where the conductor questioned his group’s own mission. It was scripted, of course, but there was thunderous applause for the Boston City Singers, the BCWC, and the change they foretold. Music schools are churning out exceptional performers, but it doesn’t mean much if the music can’t escape those hallowed halls. Tonight it did. And some new ideas snuck back in, too. 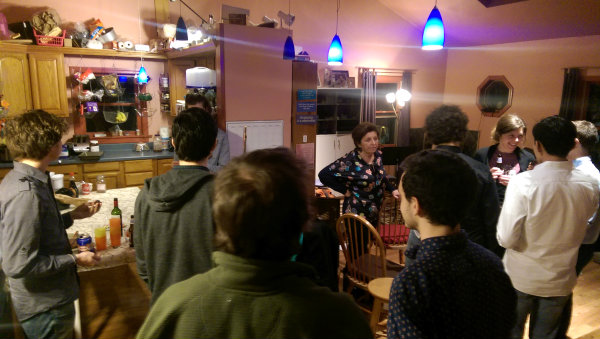 This show arguably said the most about where Boston’s classical and new music scene is headed. Music schools are hotbeds for experimentation, but outfits like Groupmuse take this proposition to a whole other place.

The musicians get an opportunity to play for beer-drinking, toe-tapping, head-nodding living-room audiences. As a fan—no matter what level—you can link up with no-frills classical music seven nights a week without putting a hurt on your wallet. It feels a bit like speed-dating, but no one wears name tags.

I rolled up on this Groupmuse drinking Arnold Palmers in honor of the Masters, which was in progress. 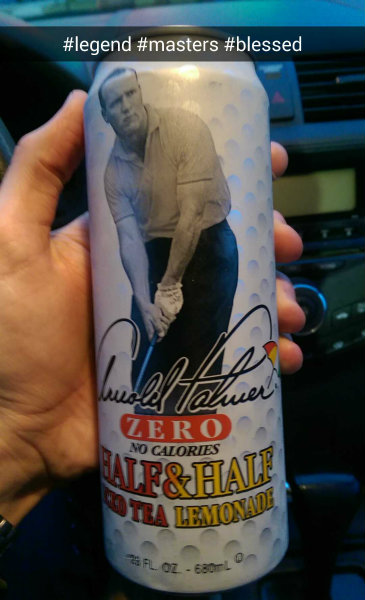 As I parked at the top of a hill I saw a young-ish man walk by staring hard into his cell phone. Without looking up he took a decisive 90-degree turn and continued on. Navigating by phone. Bingo. Partygoer.

The thing about Groupmuse is that you’re inviting yourself into a stranger’s domestic situation for a house party. You’re in a room with a small cadre of people. There are Solo cups filled with mystery liquids, jury-rigged seats, and people who are painfully kind. It’s jarring the first time around.

There wasn’t much pre-show chatter here, just handshakes and smiles. Someone talked about how Andris Nelsons looks off-balance conducting. He added: “I like him a lot.” The musicians—violin, cello, clarinet, flute, some of them members of the Boston Young Composers Ensemble—took their seats in the living room.

They played movements from Bach’s The Art of the Fugue, and we clapped between each (a Groupmuse directive). Then they took on Mason Bates’s The Life of Birds. You could tell they’d performed it before, handling tricky ensemble passages with ease. Toward the end the bench I sat on got a little uncomfortable, but the music didn’t. 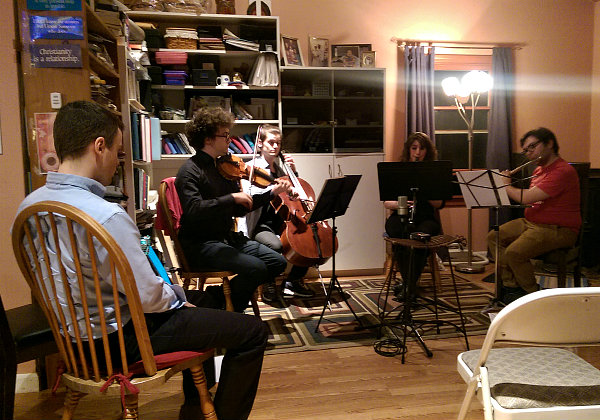 As an encore an audience member grabbed his sax and performed a piece by Ian Dicke called Straphanger. It was angular, multi-metered, metallic, and hard. A different kind of encore, but it worked—like playing Gary Numan songs to achieve peak pre-bedtime chill.

It’s been said Groupmuse is like Airbnb for classical house shows, and I think that’s a good characterization. What the setting lacks in opulence (this being a normal apartment like yours or mine) it makes up for in comfort, atmosphere, and alcohol.

Every attendee I talked to was a musician. (One was an assistant to the great Gunther Schuller.) Maybe Groupmuse hasn’t caught on with less-adventurous folks. But it will. For the price of a donation and some socializing, it’s a seductive classical fix. 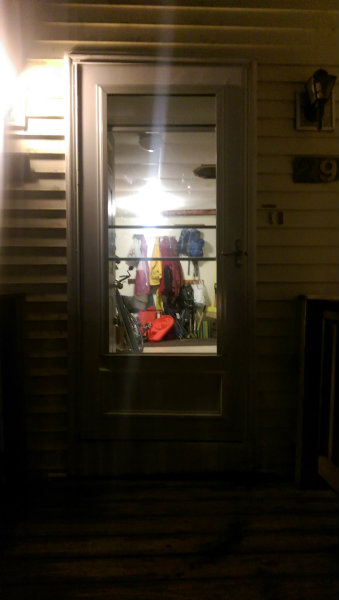 Taken as a whole, these shows don’t constitute musical upheaval. They don’t foretell the demise of the BSO or any establishment-type groups that still serve a vital purpose—entertaining high volumes of people.

What they do show us is that Boston is serious about its music and willing to get behind wild new ideas. Not every group is destined for all-time greatness. Some fail. That’s the nature of the beast.

But we’re a city with a mean classical habit, and on any given night you can luck into cool chamber music showcases or solo recitals, most of which are—crucially—inexpensive. The groups come and go, but the audiences hang on, and they’re ready for the next show. 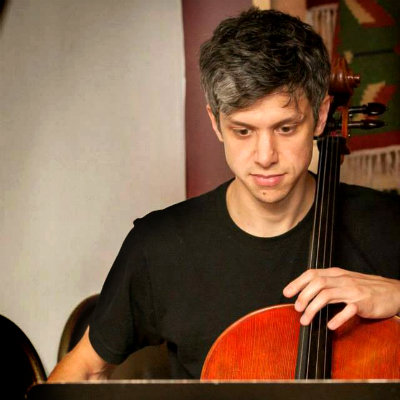