For the Love
NewMusicBox
Written By

This year’s fundraiser for the Dizzy Gillespie Memorial Fund, presented at the Cotton Club’s current incarnation in Harlem, was a finely sculpted presentation featuring some high-energy performances. 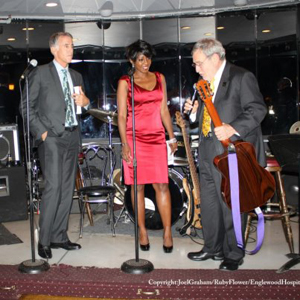 Dr. Forte explains himself to the emcees.

It’s been over a year since the last fundraising event for the Dizzy Gillespie Memorial Fund took place at Le Poisson Rouge in Manhattan’s Greenwich Village. It was a night filled with musicians of every stripe that went well past midnight and was covered for NewMusicBox readers in a previous post. The annual event raises money to underwrite services for uninsured jazz musicians at the Englewood Hospital and Medical Center, a non-profit institution located in Englewood, NJ. This year’s fundraiser was presented at the Cotton Club’s current incarnation in Harlem and was co-sponsored by Ruby Flower Productions, which is part of a record company founded in 2005 by trumpeter Herb Robertson and Colombian poet-filmmaker Dr. Ana Isabel Ordonez.

How music production became Ordonez’s life passion is explained in an interview with EOTM Radio.com founder Carla B., who also introduced the emcees of this year’s fundraiser, NY1 news anchor Cheryl Wills and United Nations Goodwill Ambassador Christopher Kennedy Lawford. Both emcees brought their new books to illustrate their connections to the fundraiser. Lawford’s Recover to Live: Kick Any Habit, Manage Any Addiction is based on the author’s experiences with recovery from drug and alcohol addiction, a problem addressed by the Dizzy Gillespie Memorial Fund. In Die Free: A Heroic Family Tale, Wills traces her family tree, a tree planted in the antebellum African-American experience that also anchors so much of the roots of jazz. 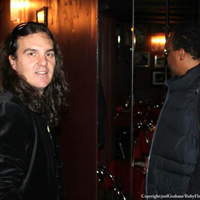 Dr. Ordonez’s lineup of artists was a finely sculpted presentation that opened with the acoustic guitar playing of Dr. Francis Forte, who was Gillespie’s oncologist and is the founder of the Dizzy Gillespie Memorial Fund. He was followed by drummer-composer Alejandro Garcia’s band, Afro Mantra, a group comprised of Ole Mathisen on saxophones, Carlos Cuevas on keyboards, and Ariel de la Portilla on bass guitar. Their tight-knit, high-energy performance was followed by the poetry, flute and saxophone playing of Elliot Levin. 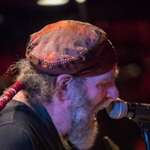 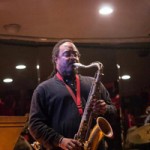 Levin was followed by the duo of saxophonist-flutist Ras Mosche and contrabassist Shayne Dulberger. They called their set “Solo et Duo,” which pretty much describes what they did, although much of the combined effect of their use of extended techniques was truly beyond verbal description. 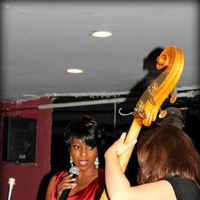 Between each set, one of the emcees would patter a little before introducing the next act. Because Dulberger would be playing with the next act, poet Steve Dalachinsky, emcee Cheryl Wills created an opportunity to plug her book with an expertly improvised poem with the bassist. I have no doubt that Wills could have a second life as a spoken-word artist, but Dalanchinsky’s experience and finesse was truly something to behold. 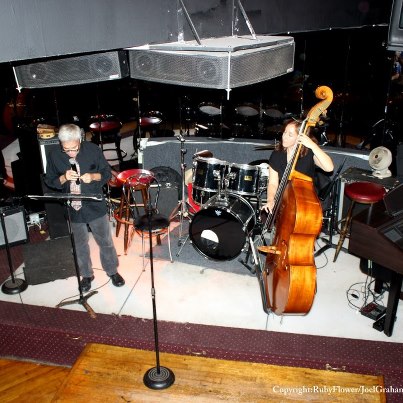 Dalachinsky was followed by a solo piano piece by multi-instrumentalist and composer Kali Z. Fasteau. Although she was slightly disheartened that the venue only had an electronic piano, her performance transcended its limitations and set a standard for the next groups to match.

I was honored to be asked to supply a group for the fundraiser. I had originally thought of the collective quintet that performed at the Stone in January, however Herb Robertson and the group’s drummer, Jay Rosen, were both out of town. I was able to enlist a young virtuoso, Lex Samu, to fill in for Robertson and had the great good fortune to have Warren Smith (co-leader with Max Roach of the percussion ensemble MBoom!) agree to play drums. Bass trombone maven David Taylor and saxophonist extraordinaire Adam Niewood (son of the late Gerry Niewood) filled out the group in a rousing and deconstructed rendition of Dizzy Gillespie’s “Con Alma.”

We were followed by a phenomenon on the drums, Marc Edwards, who brought his Slipstream Travel Band that included Chad Lesfowitz-Brown on tenor saxophone, Ernest Anderson and Alex Lozupone, on electric guitars, Gene Janas on bass guitar, and Alexis Marcelo on piano. Their textural density and musical intensity was a climactic point in the evening’s program and was contrasted brilliantly by the duo of poet Tracie Morris and guitarist Marvin Sewell. 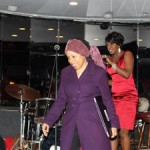 Morris’s material uses the expressions of traditional Southern blues to reflect on contemporary issues common to both sides of the Mason-Dixon. I’ve enjoyed her performances with Elliott Sharp on several occasions, but was not at all disappointed with her collaboration with Sewell, a guitarist whose approach is very different from Sharp.

Drummer Weasel Walter brought sonic energy back to fever pitch with a power trio featuring Tim Dahl on bass guitar and Matt Nelson on tenor saxophone. Dahl’s use of pedals and electronic effects was masterful and a good contrast to Nelson’s acoustic sound. Their through-composed performance set the stage nicely for bassist Francois Grillot’s ensemble, Contraband. I was not able to hear the title of the piece he performed, but his group comprised of Brian Groder on trumpet, Matt Lavelle on trumpet and alto clarinet, Blaise Siwula on alto saxophone, Catherine Sikora on tenor saxophone, Bern Nix on guitar, and Dave Miller on drums was as smooth and grooving as the music Grillot orchestrated for them. It was a perfect way to end the concert. 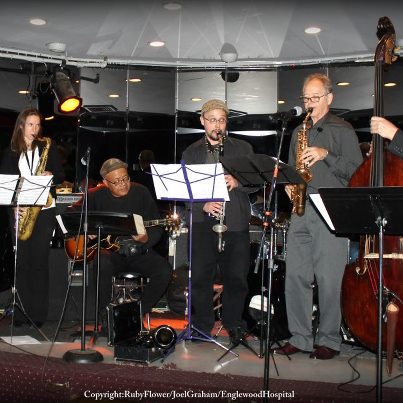 The only sad part about the event was the turnout. Last year’s fundraiser pretty much sold out Le Poisson Rouge, but this year’s event had to compete with a televised one that much of the nation stayed home to watch. Coupled with the location of the event, only twenty people came out to attend the fundraiser. I know that most of the musicians who performed dug into their pockets to fill the envelopes with whatever they had. All in all, only $1,200 was raised this year, which added a bittersweet aftertaste to reading Ellen McSweeney’s article this week. I guess we’ll just have to wait until next year.