Each year, the Guildhall Leadership course accepts a handful of students from all over the world. The course asks them to improvise, compose, teach, and collaborate with each other and with London artists from many other disciplines. They generate new work, embark on research projects, and actively facilitate creative music-making in London communities that wouldn’t otherwise have the opportunity. 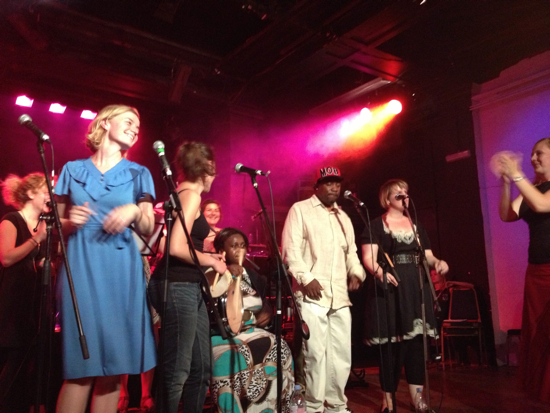 During my week at the Curious Festival, put on by the Guildhall School and the Barbican, I had the same conversation several times.

I had come to London to visit friends, but figuring out what exactly was happening at the Guildhall School was pretty high on my to-do list. Over the years, I’ve known several American musicians—some of whom are close friends—who’ve attended the Music Leadership course at the Guildhall School of Music & Drama. Program alumni are doing fascinating and boundary-crossing things with their musical careers. My friend Preetha Narayanan toured with Oi va Voi and ended up co-founding a piano trio that writes and performs its own original music; my friend Liza Barley embarked on a major research project on Grief And The Artist (in which I participated) and founded a duo called ontoSonics; Jill Collier Warne, a Michigan-based cellist, now shares what she learned at Guildhall in creative workshops all over the country.

Each year, the Guildhall Leadership course accepts a handful of students from all over the world. The course asks them to improvise, compose, teach, and collaborate with each other and with London artists from many other disciplines. They generate new work, embark on research projects, and actively facilitate creative music-making in London communities that wouldn’t otherwise have the opportunity.

The course demands, and allows, a level of creativity, collaboration and freedom that few American music degree programs even consider. It encourages classically trained composers, instrumentalists, and electronic musicians to have a broad conception of what role they can play in their communities. It’s an experimental, challenging, almost fringe-feeling artistic community—with the backing of Guildhall and the Barbican, two of London’s biggest cultural institutions. Immersing myself a bit in the culture of the department was a rich opportunity to reflect on what’s happening in the Chicago contemporary music community. Here are the lessons that I, as an American musician, was excited to take home with me.

1. Experimental, challenging art and community music-making don’t need to dwell in separate universes.
On Tuesday night at the Curious Festival, I attended Neurath’s Boat, a presentation of new collaborative work by students from the Guildhall program and from Central St. Martin’s College of Art. The evening—whose performances drew inspiration from performance art, video media, and theater—could have easily been presented in any of Chicago’s most cutting-edge, experimental art spaces.
On Friday night, I was back in the same space, watching the same musicians perform in The Messengers. The band arranges and performs original songs written by Londoners who are formerly homeless, recovering addicts, or both.
These two wildly different performances—given in fulfillment of the same degree program—represented a refreshing juxtaposition of core values that are rarely combined. The Music Leadership course seems to be creating a space in which artists can create challenging, authentic work—while also making their musical gifts accessible to a wide variety of London communities

2. We don’t have to give someone a decade of instrument lessons before they can make music.
I was particularly overjoyed to observe rehearsals and performances by The Messengers—the ensemble in which Leadership students help perform the original songs of people recovering from homelessness and addiction. Madha, one member of the group, performed as lead singer over sweeping arrangements of his twenty-minute metal/goth-inspired suite. As he spoke-sung the brooding lyrics over the skilled accompaniment of a full rock band, piano, strings, winds, and backup vocals, the sense of joy and creative accomplishment was palpable. One extroverted participant remained in the front row throughout, beaming from ear to ear and thanking the audience rapturously after each number—including his own amazing Christian rock tune. A man who had been an introverted onstage presence was suddenly featured in a joyous rap solo; in another song, an African immigrant sang a touching original song about loneliness and homecoming. 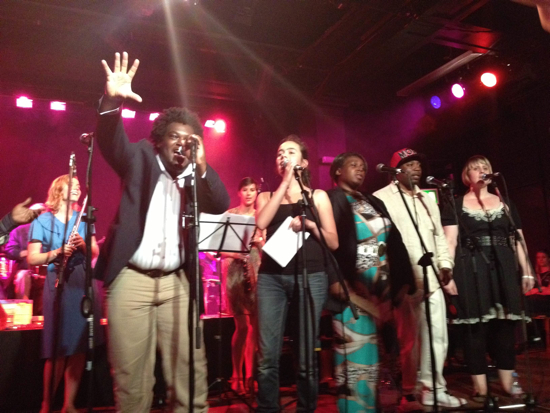 The Messengers in action.

Under the deft leadership of Sigrun Saevarsdottir-Griffiths, The Messengers is a rare creative haven for individuals who are at high risk for isolation and social rejection. The ensemble equips them with the musical resources to bring their ideas to full-fledged fruition. For me, this is an exciting model, with major implications for how to embark on “adult beginner” participation in music performance.

3. There’s no limit to the way the special skills of musicians, or the special capacities of music itself, can be used.
When ontoSonics—musicians and creative partners Liza Barley and Evi Nakou—began conceiving their final project, they knew they wanted to continue the work of intimate conversations and connections that they had begun with their 2012 research project on grief and the artist. So they started a collaboration with Amie’s Group, a community support group for women victims of sexual trafficking, hailing from nations as far-flung as Ghana, Thailand, and Albania.

What do musicians creating a sound installation have to offer a group of trafficking victims as they heal and grow? As it turns out, plenty. These women, whose life stories are full of painful episodes, participated in gathering and creating audio, photography, and sculpture for the ontoSonics installation at the Curious Festival. During the audio-gathering phase, they became creative agents rather than subjects, choosing places to photograph and interviewing complete strangers about significant events that have shaped their lives. The installation room became a kind of “story-catching” space, where the women’s interviews were played on speakers and where visitors could feel free to add their own text, sound, and visual stories. For this group of women, it was an opportunity to be creative, to think outside their usual parameters, and to connect with each other and the artistic process in a new way. 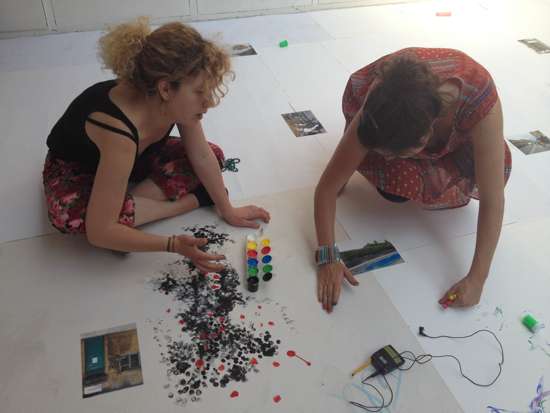 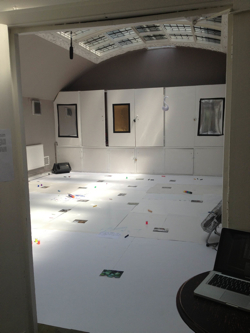 This Life Cycles story-catching project inspired me to think about what other ways we could involve and engage “uninitiated” neighbors in the creation of musical work.

4. You don’t need special permission or multiple academic degrees before you’re allowed to compose.
Most of the students in the Leadership program don’t identify as composers when they enter the program, but they’re immediately expected to begin creating their own music. For me—an American performer who wants to make creativity a part of my practice—this was a refreshing change from the strict division of labor between performers and composers. At the Neurath’s Boat performance I attended, this encouragement towards creativity yielded an amazing diversity of compositional voices. Guitarist and electronic musician Gil Teixeira collaborated with video artist May Yan Man on a sensual, immersive, sonic and visual exploration of a simple floor fan. Singer/composer Teresa Campos created an arresting and sometimes terrifying “breathscape” to accompany video (by Aya Arden-Clarke) of herself emerging and re-submerging into water; oboist Marlies van Gangelen lay on her back and batted a swinging, glowing orb back and forth with the bell of her oboe as she played. Together, the evening was a diverse and fascinating look at the compositional and creative voices that can emerge from a pool of performer-identified artists.

5. It is absolutely possible to create an environment where women thrive as electronic composers, musical visionaries, and creative leaders.

The Neurath’s Boat performance, and the Leadership program itself, was comprised of a majority of women artists—something Chicagoans can’t say about our edgiest centers for electronic and improvised work. Clearly, a fantastic creative environment has been created for women artists on the Leadership course. How has this dynamic been achieved? It’s a kind of chicken-or-egg situation, where women’s participation begets more participation—and, of course, exclusion begets exclusion. Perhaps Guildhall’s success in fostering female creativity has something to do with what I named in Item 4. If we stopped strictly defining the criteria for what a “real composer” is, and simply compelled all musicians to create, would more women start doing “real composing”?