Fitting In
NewMusicBox
Written By

We don’t create or ultimately listen to anything in isolation. What we make as well as how we experience what others make is always informed by what is around it.

The summer doesn’t officially end until September 21, but it definitely feels like it’s over immediately after Labor Day. For folks in academia, that’s because classes have already started up. For the rest of us, it’s a tad murkier although a drop in the temperature can help alter one’s perception about the season. This year in NYC, however, the weather remained unbearably hot until last night; thankfully today feels decisively autumnal. Nevertheless, I felt like summer had already passed a few weeks ago because my internal calendar is governed by my concert-going schedule. I don’t mean to imply that tons of concerts do not occur here in July and August, because they do. But usually in the summer months I miss a lot of them because I’m either out of town on vacation, or attending festival concerts elsewhere. This summer, even though I stayed in town, I took a hiatus from my typical weekly concert intake to devote more time to my own composing. Yet a few weeks ago the urge to experience live concert performances again got the better of me—so alas, it’s autumn!

I returned to my usual live listening habits a few days before Labor Day, intrigued by an August 29 concert program at the Duplex Cabaret and Piano Bar in Greenwich Village, which paired the solo piano music of Los Angeles-based Nick Norton with art songs by NYC-based Dennis Tobenski. I had never heard a complete piece of music by either composer live or on recording. But based on what I knew about both of them (culled from hearing snippets, seeing score samples, and various conversations), I had harbored the belief that their music shares little common ground. My suspicions proved to be correct. Most of Norton’s pieces (the concert featured his complete solo piano music to date) are visceral sonic haiku which pair modernist sonorities with clever conceptual underpinnings; one—aptly titled 88—is a collection of all 88 of the pitches possible on a standard piano, played once each. On the other hand, Tobenski’s songs are sensitive, deeply personal, and unabashedly tonal; a formidable tenor, he sang them all himself, accompanied by pianist Marc Peloquin. Steven Beck performed all of Norton’s pieces. The program went back and forth between the two composers and the two pianists but there was never any doubt as to who wrote what. Aside from the clear alternation of instrumental and vocal music and the visual juxtaposition of the piano changing hands, their two compositional voices were disparate to the point of almost being jarring. And yet it somehow worked. The only real cognitive dissonance on the program was a piano sonata conceptualized by Norton and composed by him along with 29 other composers, exquisite corpse-style via Twitter and credited to #Armada. A work involving so many different creators, none of whom was aware of what the others had created, ought not to have held together. Miraculously it did, although it was not exactly a sonata since it would have actually been impossible for 30 composers to develop thematic material they knew nothing about. 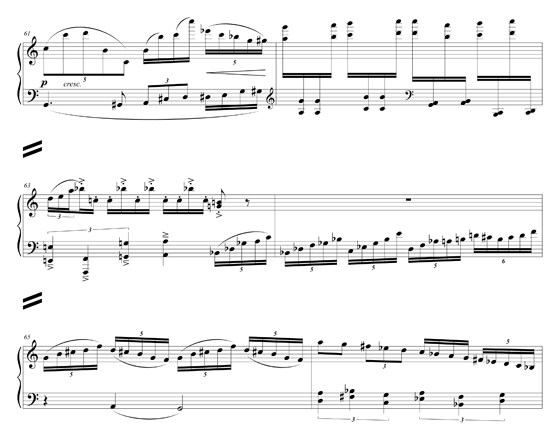 Serendipidous continuity? A portion of the score of the #Armada Piano Sonata, reprinted with the permission of its musical perpetrator Nick Norton.

Why it was able to work at all strikes to the heart both of how we listen to things and how collections of experiences tend to be curated. A slightly different manifestation of the same phenomenon occurred at another concert I attended this past weekend which involved a tiny bit of my own music. My wife, Trudy Chan, is a pianist and she performs in song recitals with a very unusual vocalist named Phillip Cheah who sings in two completely different registers—baritone and male soprano. Most of their concerts to date have focused on art songs from a specific country or linguistic region—France, England, U.S.A., Germany/Austria. Their program this past Saturday, however, was a collection of songs about love from each of these places. As with most classical art song recitals, their program featured a series of song sets meant to be listened to as a whole, and they therefore only elicited applause at the end of each set. As a result, songs by different composers (and frequently different countries and eras) got lumped together and became de facto unified sonic experiences. Two songs of mine from the 1990s (each from larger cycles) were presented like this. One of my E. E. Cummings settings prefaced a Yeats setting by Ned Rorem that was followed by a Jean Cocteau-inspired Kurt Weill song; a movement of my Margaret Atwood cycle was sandwiched between a Walt Whitman setting by Rorem and a song from Stephen Sondheim’s Follies. Even though these performers are really close to me and I was delighted to be part of their program, it initially felt a little weird to have my music recontextualized this way. And yet it all worked. 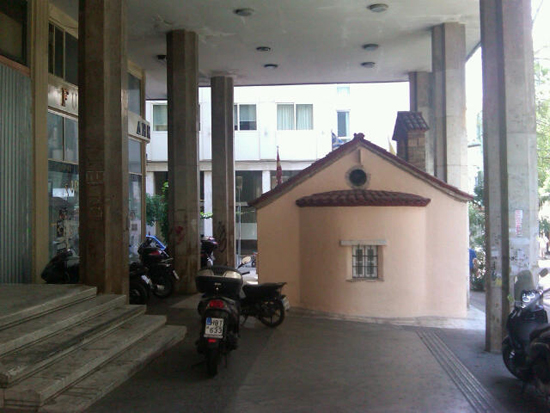 One of my more memorable cognitive dissonance experience happened this past June when I stumbled upon this tiny 800 year old Greek Orthodox Church in downtown Athens which at some point during the 20th century had a office building constructed around it.

Obviously we don’t create or ultimately listen to anything in isolation; what we make as well as how we experience what others make is always informed by what is around it. I’ve posited before that one of the reasons new music on orchestral concerts can be problematic is that the new piece is often completely different from all the other music on the program so it seems like it doesn’t quite fit in to people who attend these concerts expecting a certain aesthetic trajectory. The occasional anger of these audiences toward new music is really no different from that of the traditionalists who got all bent out of shape (pun perhaps intended) a few decades back when I.M. Pei designed futuristic glass pyramids for the main courtyard of the grandly Baroque-looking Louvre Museum in Paris. Yet at the same time, there are some hard core new music people who complain about new orchestral pieces that do actually fit in sonically, since as a result those pieces don’t match these listeners’ perceptions of what new music ought to sound like. Admittedly I was guilty of the same perceptual framing back in May when I bemoaned a performance of a Beethoven piano trio on an otherwise all new music concert I attended in Hong Kong. Of course when the stylistic gauntlet is thrown to the winds and new music can be whatever we desire it to be and as listeners we can be free to mix the music of any place or any time period however we choose, the notion of fitting in seems quaint and antiquated. Yet, I would dare posit that even among the most open-minded people, certain combinations feel more right than others. Had my two songs involved extensive piano preparations, extended vocal techniques, or an array of electronic processing, they probably could not have convincingly cohabitated with those other composers or any others on the program.

My music could be spliced together successfully with music by others with seemingly different aesthetics from mine because all of our music still shared the same basic parameters. That it came across as seamless as a result got me thinking again about that #Armada Piano Sonata and why it worked even though none of the 30 composers who collectively created it had any idea about what any of the others were composing. The fact that each had the same constraints—solo piano and sonic content of composition fragment which had to be conveyed within 140 characters (since, remember, it was all done via Twitter)—created a framework for at least some degree of consistency. The fact that their 30 contributions were presented together as a unified whole also linked the material together for listeners who were already sympathetic toward the experiment. Whether or not an #Armada Symphony would be appreciated by orchestra subscribers is a completely different question.