Scientists say that black holes are so dense with matter that light isn’t able to escape. Such fierce density is theorized but not experienced. Imagine a sound that is the black hole of sounds. Every possible location on the sound spectrum has been filled.

Ed Note: It has been more than two months since the music community mourned the passing of Glenn Branca, but he still remains very much on the minds of many of us. Among the many composers who have been deeply affected by Branca is Michael Gordon who not only dedicated his seminal 1988 composition Four Kings Fight Five to Branca but who also, in his capacity as one of the three artistic directors of Bang on a Can, was responsible for presenting his work at BoaC’s annual marathon several times over the last 30 years as well as recording it for BoaC’s Cantaloupe Music label. So we asked Michael to share his unique memories of this unique musical creator.—FJO

In the post office on Prince Street that is now an Apple Store, I walk in and there’s a long line. I see Glenn Branca. He’s farther along in the line and he’s in an intense conversation with a woman. It’s Reg Bloor. I know that only later. I hadn’t met her then. I watch. It’s New York. Glenn Branca is in line at the Post Office. How can that be? Hasn’t he been able to commandeer the laws of physics and just get his package there?

Imagine a sound that is the black hole of sounds.

Scientists say that black holes are so dense with matter that light isn’t able to escape. Such fierce density is theorized but not experienced. Imagine a sound that is the black hole of sounds. Every possible location on the sound spectrum has been filled. There is more sound than can be heard. There is so much sound, the sound itself is creating more sound. It is an over-saturation of sound. And all that sound is a by-product of music. You hear the music and you hear imagined musics simultaneously. Perhaps they are choirs of heavenly bodies. You are at a Glenn Branca concert in the 1980s. You are at Symphony #3. I ask around for cigarettes, tear off the filters and stuff them in my ears.

It was actually earlier—the picture says 1979. Is that possible? I was going out every night to hear music. The concert said ‘experimental’ or something like that, but to me it sounded like a bunch of not-so-great bands. I can’t remember anything about it except being trapped. I can’t leave, because maybe the next thing is worth listening to. It was the final thing. It looked like another band. Four guitars? Drums, bass? Is there a keyboard? Was someone conducting? No. Branca is in front of the band, back to the audience, faster, louder. Someone with a sledge hammer starts slamming a metallic object. Dissonance. This is why I’m here! This is why I moved to New York!

Ten years later, I call Branca. Mr. Branca. I know his name is Glenn but when we talk about him, we call him Branca. “I want you to play Symphony #6 on the festival.” Branca starts yelling at me. I love this guy. I know he’s fierce, and I know that all that fierceness is devoted to truth. We do the concert. Branca is unhappy with how it went, and afterwards he locks himself up somewhere backstage. People are waiting after the show to congratulate him. Someone big is there. Was it Bowie? But Branca is miserable and won’t come out. The following night we do it again and things go well. He’s relaxed and he talks to people. 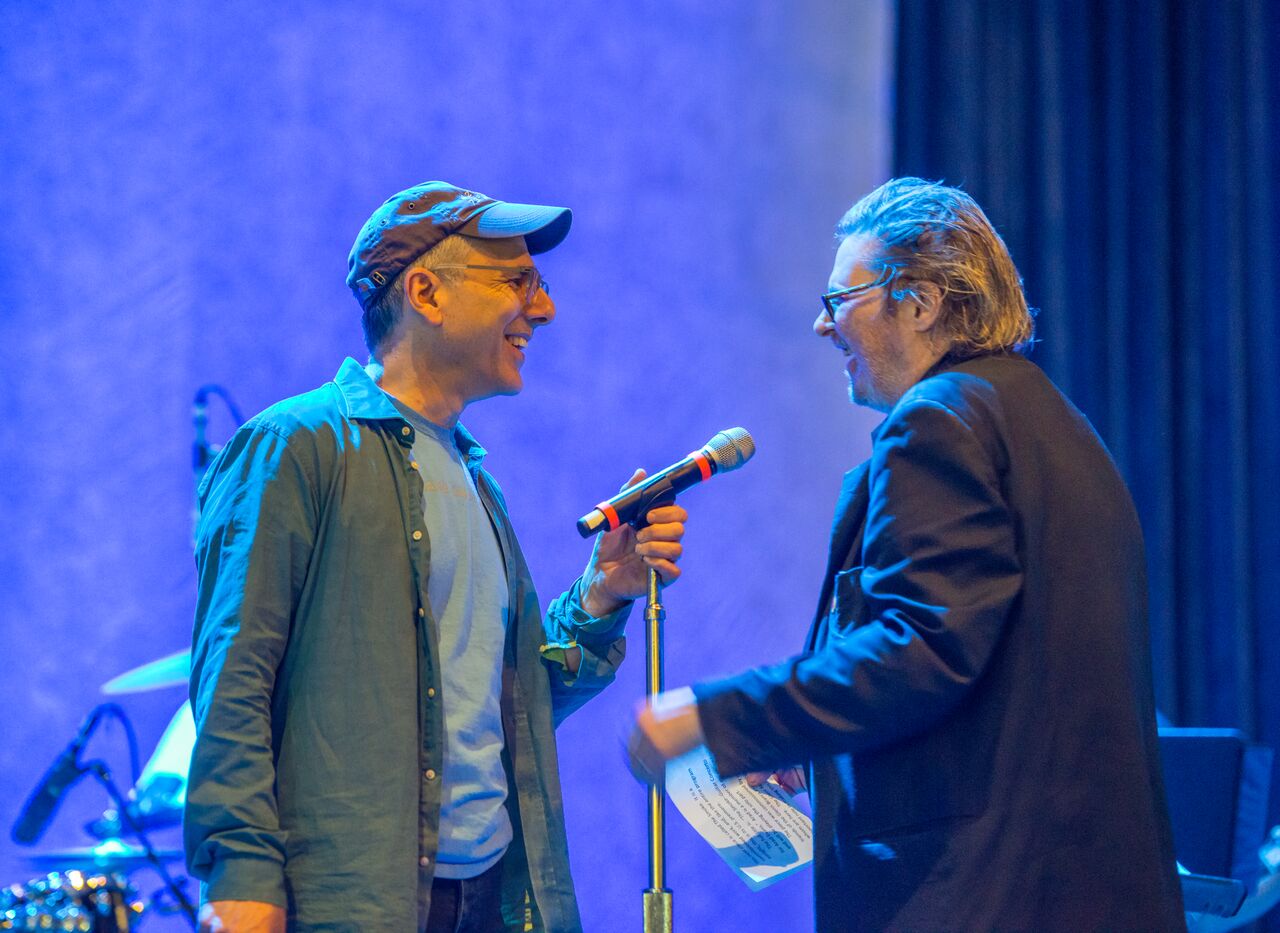 Michael Gordon and Glenn Branca (photo by Stephanie Berger, courtesy Bang on a Can)

Branca is a sensation. He’s touring and he must be making money because he has a studio to work in. Was it in a basement? I visit him there, and he explains his theories. It must have been a while back because the paper in the printer had little holes on the sides and the numbers, lots of numbers, had that unsmoothed, undigital look. He has charts, he has graphs and more numbers. He fits in with those brainy people in Europe who think a lot. When you are at a performance, you are at a primal scream ritual. People could be throwing themselves into the flames. But in his studio, Branca is thinking about overtones. He is mapping large movements of harmonics.

“We have an orchestra,” I tell him. “It’s called Spit Orchestra. We want to play your orchestra music.” The World Upside Down. Branca is very practical. It’s all written out, it all works, it sounds like Branca, but there are no guitars. The precise markings of overtones have been replaced with conventional signs indicating 1/8th tone or 1/4 tone flat and sharp. He explains: they can’t get any more precise than this and it sounds good. It does sound good.

I’m at LPR to hear Branca. It’s Symphony #15. The lines down the block are a distant memory. There are people seated at tables, ordering drinks. But not enough people. I am embarrassed. But not Glenn. He is as always. There are movements, about seven of them. Not sure. One of them is totally bizarre. They are throwing things through the air that make sound. It’s whimsical. It is funny. I don’t get it. After, Branca says, “Did you get it?” I didn’t get it. Later I get it. Branca has written a Scherzo. Branca must be happy.

The last time I see Branca, it’s 2015. He is playing on the festival again. The Ascension Three. Is Glenn a Catholic? Does he pray? Does he have visions? He is just as extreme as 1979. Thirty-six years later, he is extremely extreme. He has channeled those visions into sound, and the sound is still too big for human consumption. The airwaves are soaked, and there’s so much music that it’s flooding the system. The merchants at the Winter Garden complain about Branca. We’ve been there for ten years, and they’ve never complained. Branca is too much. We get kicked out of the venue for good. Branca was the last act we did there. 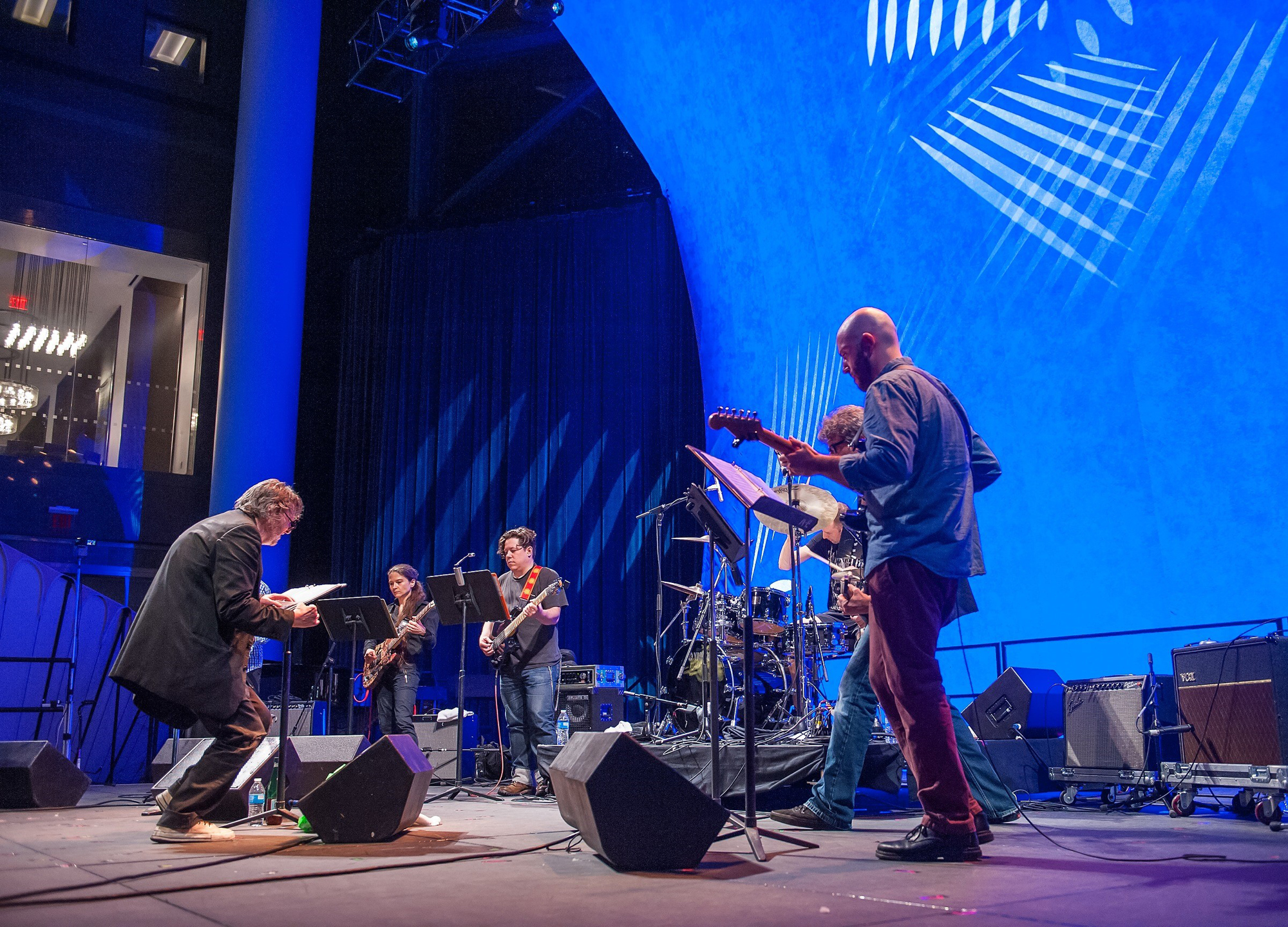 Glenn Branca “conducting” an ensemble of electric guitars in a performance of his Ascension at the World Financial Center’s Winter Garden during the 2015 Bang on a Can Marathon (Photo by Stephanie Berger, courtesy Bang on a Can)

Are we going to hear this music again? I thought that then, that night in 2015, and I think that now. The Symphonies were created, and sometimes recorded, in a process that isn’t easily recreatable. Many of the musicians were taught by rote. Were scores left? Is anyone going to take this on? Even if they do, can anyone channel the energy that Branca summoned during a performance? Are these like great buildings, designed, built, destroyed? Is all we have left a picture?

In my tiny corner of the universe, listening to Branca’s music meant that your soul had been purified or purged and had knelt before God in humility and glory. And that by some upending of the laws of nature, you manage to bottle a scent of it and bring it back to earth, and turn that scent into music, and that music, which is just a sound of a scent of something holy, is all that you have and everything that you have.

Symphony #6, sub-titled Devil Choirs At The Gates Of Heaven, is all of it in a nutshell. It’s the dichotomy of Branca’s music: by excessive use of loudness, grungy guitars, microtonal tuning, dark and heavily tuned drums, maniacal energy, and erratic onstage persona, his music manages to alienate almost the entire classical music world. By excessive large scale musical form, lack of vocals, microtonal tuning, abstractness, non-narrative-ness, and complete un-commerciality, it manages to alienate almost the entire popular music world. It is a marriage of Heaven and Hell that repulses all and demands expulsion. About what kind of art can you make a statement like that?

I took comfort knowing that Branca lived a subway ride away.

I wake up and have the feeling that New York City isn’t the same. We build the Glory of Civilization on the backs of our most expansive minds. There is nothing about this city that makes it a Great City except the people who live here. Now there is one less. If I didn’t see Glenn every day, or every year, I took comfort knowing that he lived a subway ride away. It might seem strange to say that, more than anyone I know, Glenn was an uncorrupted soul. How artists hang on as they navigate through the maze of those who buy, criticize, and analyze, applaud, and ignore, is a measure of a life. To me, Glenn was a pious monk and a messenger of holy sounds, and I hope that there was a choir of angels singing for him when he arrived at the gates of heaven.

Ed. Note: In 2012, NewMusicBox published an extensive conversation with Glenn Branca. Here are some of the highlights: