Ian Dicke, Robert Honstein, and Steven Snowden upped the ante at this year’s Fast Forward Austin festival by tripling the call for scores winners, bringing in a headliner, and moving to a big, multilevel venue near downtown complete with a bar, soundman, and a dude who stamps your hand.

When you do a sequel, you can either do Empire Strikes Back or Ghostbusters II.

Which is to say, when you have a hit on your hands, you can take some risks and possibly alienate the fan base that made you worthy of a sequel in the first place, or you can play it safe, give them the same show warmed-over, and collect your pay. Ian Dicke, Robert Honstein, and Steven Snowden upped the ante at this year’s Fast Forward Austin festival by tripling the call for scores winners, bringing in a headliner, and moving to a big, multilevel venue near downtown complete with a bar, soundman, and a dude who stamps your hand. 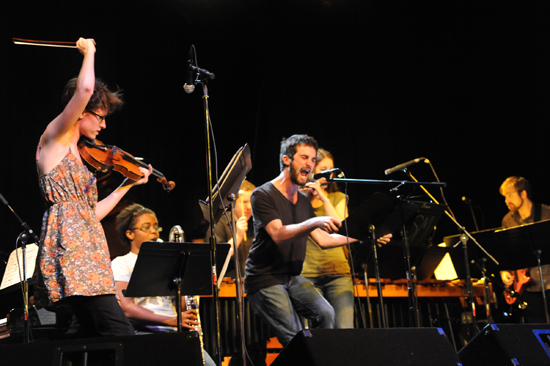 Precipice, a mixed chamber ensemble from up the road in Waco, started things off. Snowden described them as a group who do “things with lots of stuff”; truer words have never been spoken. They began their set with the first call for scores winner of the day, Shawn Allison’s Towards the Flame, a four-movement work for violin, flute, cello, and percussion. Based on a variety of moth species, Allison’s piece began with flourishes and broken lines before moving to unison gestures in the second movement. The third movement featured extended techniques on the flute while percussion patter coalesced to a rock groove. Daniel Webbon’s[*] string trio For thee, oh Absalom, my son in three movements was an attractive, somber, and contemplative work that served well as a last minute replacement on the program. Precipice finished their set with a powerful rendition of Frederick Rzewski’s Coming Together. 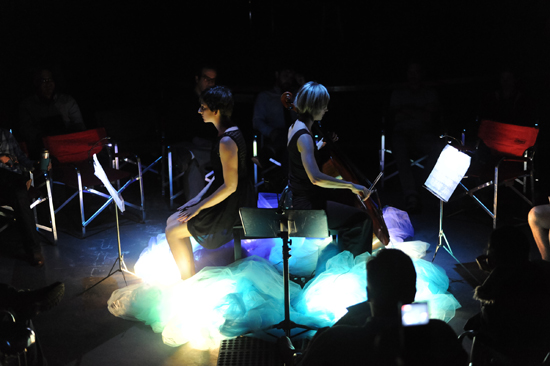 When I returned after the set change, I found that the chairs in the venue had been resituated around a piano bench surrounded by three music stands and backlit, pastel tulle. Cellist Leanne Zacharias and dancer Katherine Hodges‘s set of four works was bookended by the first and fourth movements from Cage’s Etudes Boreales. They began the performance as the house lights dimmed, each performer seated on the piano bench but facing away from one another. As Zacharias began playing, Hodges sat motionless, moving slowly around the space only after several minutes of music. Delicate glissando and harmonics complimented the slight, intimate shifting as Hodges made her way through the tulle. Zacharias turned 90 degrees to perform Event Horizon by Nicole Lizee. Pizzicato scale-fragment ostinato, percussive sections reminiscent of heavy metal palm muting, and pre-recorded material (originally for violin, cello, and bass, but here recorded entirely on the cello by Zacharias) were woven with a dance that foreshadowed the slurred cello of the final section. Eugen Friesen’s Pizzicato Etude had elements straight out of guitar technique, complete with arpeggios and syncopated, ascending, slurred groups of three. The final work mirrored the first both in musical character and in presentation, as cellist and dancer came full circle, ending where the other had begun.

Spank Dance Company returned to FFA with another engaging butoh performance, followed by composer and bassist P. Kellach Waddle performing a series of his works for bass alone, ranging from the ’80s through last week. A member of the Austin Symphony Orchestra for over two decades, Waddle is a prolific composer, passionate performer, and consummate businessman, and his production company PKWproductions, through its long time association with Strait Music, supplied the piano for the festival. His works were romantic and dramatic, hair flying as slow melancholy melodies in the lower register were countered by virtuosic runs in the upper, a quasi-improvisatory character running throughout. 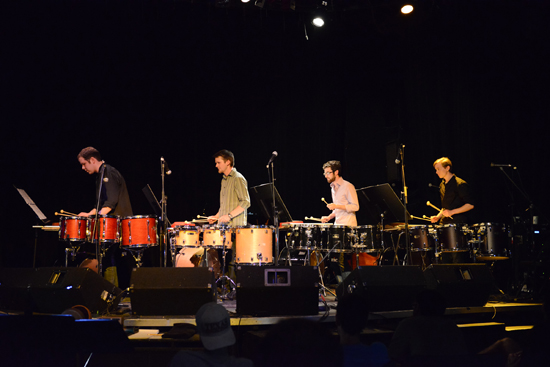 After a brief set change, Baylor Percussion Group performed Peaux from Xenakis’s Pleadis, which—thanks to my Louisiana heritage—I can pronounce with uncanny accuracy. Peaux is what all guys in drum circles think they sound like, all big and unison and cathartic, and BPG delivered the goods from the second floor loft. BGP moved to the stage for the second movement of Lang’s so-called laws of nature. This quartet features identical instrumentation for all players, including three floor toms, bass drum (with foot pedals), and metal pipes which at first glance resembled re-purposed chimes, but in fact were cut to specific lengths to yield specific pitches. With each performer facing stage-right, the movement began slowly on the pipes and added the toms and bass which eventually take over, developing into a huge pulsing texture far removed from the pitch elements of the initial gestures. The athleticism of the second movement was contrasted by the meditative delicacy of the third. The teacup, crotales, and guiro instrumentation were coupled with pedal-like figures, occasional notes popping up from the tea cup tremolo. The program described an extended diminuendo and ended with applause recalling the volume of the first piece. 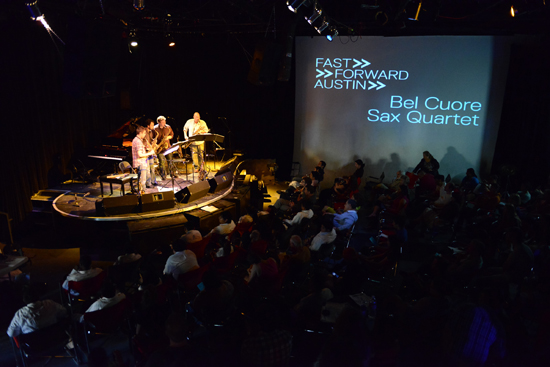 Bel Cuore Sax Quartet performed Snowden’s Speed Studies, a work that opened slowly, moving to a series of declamatory statements in the high register. Key slaps and other rhythmic effects in the tenor and bari played hide and seek with rips in soprano and alto leading to a funky groove and a slamming ending topped of by the declamatory statement. Matthew Ricketts’s[*] Summerline was quiet and pensive. Thoughtful use of combination tones by Ricketts and careful phrasing by Bel Cuore made for a wonderful tension throughout the work. David Biedenbender’s you’ve been talking in your sleep was the second call for scores winner. The sighing, sleeping, and breathing that opened the piece were sideswiped by a honking Morse code in the bari, which in turn morphed into full-blown syncopation among the players, culminating in complete tutti madness. Finally, Life and Afterlife by Nick Sibicky closed Bel Cuore’s set. A narrative work in two movements, the piece started with bright pulsing rhythms and moved to more solemn lines. In the second section, BCSQ took a seat and took up rainsticks, shakers, and the errant drum to the delight of a number of kids who sat wide-eyed in the front. 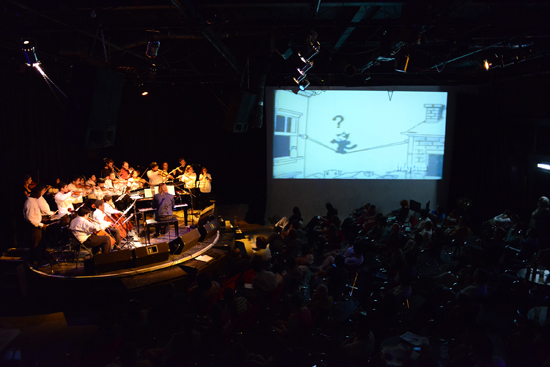 FFA continued its support of non-profit music education for underserved groups this year with Austin Soundwaves, a new program based on Venezuela’s El Sistema program. An orchestra of about 30 students from the burgeoning program was led by Graham Reynolds in providing music and sound effects to a Felix the Cat film. After their short, charming set, Reynolds was joined by several local pros with whom he’d been working on an upcoming commission. The tunes were built from a funky mix of genres and, after several songs, Vicky Chow and Owen Weaver joined Reynolds on stage. Chow and Reynolds banged out several tunes on the keys, and when I say “banged out” I could not mean that more literally. That piano was rode hard and put up wet, and this became particularly clear later in the evening when Chow did her solo set.

Owen Weaver’s set began with Christopher Cerrone’s Memory Palace. Crickets and other sounds of the early evening were joined by Weaver plucking inside the piano and, as the piece progressed, a background of late night sounds played behind Weaver’s delicate performance. The second movement featured Weaver playing a custom mallet percussion instrument. Made of five or six wooden planks and sounding a bit like a muffled set of woodblocks, the instrument was played with two mallets per hand, one mallet above and one below the planks so that Weaver could provide an extended tremolo that made my arms ache to watch. The tremolo was complimented by electronics that picked up and amplified the natural resonance of the bars. Ian Dicke’s 808 featured loops from the classic Roland 808 drum machine along with real-time manipulation (via MAX/MSP) of cymbals, tambourine, cowbell, and bells, among other percussion instruments. I’ve heard this one several times, and each time it’s a slightly different experience. The use of the crash cymbal in conjunction with the electronics is particularly compelling, giving the impression that the sound not only emanates from the cymbal and through the electronics, but also at times returns to the cymbal from the electronics like a genie returning to the bottle. Vicky Chow joined Weaver for Daniel Wohl’s Pixellated. Beginning with a trill on bells and slaps on piano, Pixellated is initially all fits and starts. A rapid, descending trichord entered the fray adding body to the texture which continued to go all herky-jerky on us like breaking news. Strummed chords in the piano further broadened this texture which eventually broke apart like a fading radio signal. 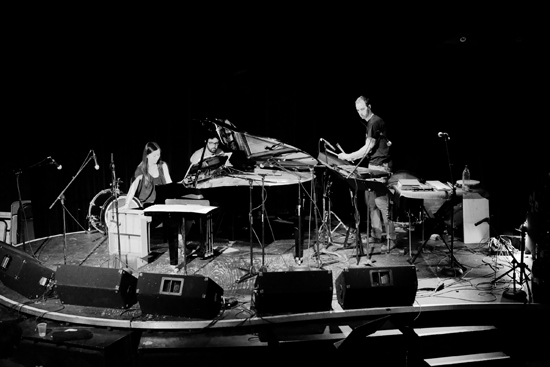 Vicky Chow took the stage before an eager audience and began with a collection of miniatures, of which Digital Sustain by Ryan Francis was a standout. Chords held out by the una corda pedal made a bed for rapid, staccato, player-piano-like figures. Christopher Cerrone’s Hoyt-Schermerhorn for piano and electronics was the final call for scores winner. A spare texture of slowly played and largely consonant chords served to describe the experience of waiting for the train at the piece’s namesake subway stop in Brooklyn. The chords split into a counterpoint between the hands, accented by the single tones as a chordal passacaglia of sorts developed in the left hand. I’m hesitant (as Cerrone was in describing the piece at the show) to go into much detail about the electronics except to say that they show up towards the end of the piece and are really quite effective. Daniel Wohl’s Aorta for piano and electronics, all syncopation in the piano coupled and textural electronic elements, and Andy Akiho’s vick(I/y) for prepared piano brought Chow’s set to a satisfying close. But we weren’t done. Joining Chow on stage for a grand finale performance of Louis Andriessen’s Workers Union were several of the festival’s performers. The combination of approximate pitch and exacting tutti rhythms among the players was an absolutely fantastic visceral experience, and could not have made for a more definitive end to the evening.

Fast Forward Austin built on the strong foundation laid last year at their inaugural festival. A blend of local, regional, and national acts along with a sense of community purpose made for a day that was as intellectually stimulating as it was warm and inviting. As my penguin hand-stamp fades, I can reflect on the events of the day while looking forward to next year’s festival, confident that it will be more Search for Spock than Phantom Menace. Of course, I’d be happy to watch Vicky Chow go all two-fisted Workers Union on Jar Jar, but perhaps that’s a whole different festival altogether.

*The composer of For thee, O Absalom, my son is Daniel Webbon, not David Webern, and the composer of Summer Line is Matthew Ricketts, not Matthew Prickett, as were originally reported. We regret the errors.