Excuse the Geek Out, Part 2
NewMusicBox
Written By

Excuse the Geek Out, Part 2

Over the past few years, I’ve been changing my approach to musical notation. As I have become more certain about my musical ideas, I’ve begun pushing against the constraints of the software, goading it along a path towards creating scores that convey these ideas as clearly as possible.

Last week in this space, I began this current geek out on musical notation, partially in response to Alexandra Gardner’s question from two weeks prior: “How much information does a composer working today attempt to convey to musicians through a written score?” The trick appears to be in avoiding over- and under-specificity while notating our ideas in order to convey our main compositional goals. I believe that there is a direct correlation between the amount of abstraction and originality in the form of a new piece and the amount of information performers need in order to understand the composer’s intent.

Of course, if you ask ten different composers to tell you what musical parameters contain their main compositional ideas, you’ll likely be treated to ten different answers. For some, music making begins with the manipulation of pitches within the 12-tone equal temperament system and its performance equivalents. For these composers, the traditional notation system works quite well, as they can name the desired note and allow the performing musician to bring their musicality to bear in order to subtly re-tune, illuminating the underlying structure. Others eschew any consideration of specific notes in order to focus on timbral issues, while a third group pushes beyond the typical 12-note limitations to compose microtonal music in tunings that don’t map onto the typical grand staff. Issues of rhythm, instrumentation, performance techniques, form, and all other musical choices will find composers displaying a similar range of unique interests. For some, the traditional notation system will suffice perfectly well, while others will need to invent unique methods to convey their ideas.

Over the past few years, I’ve been changing my approach to musical notation. I began my compositional studies writing conventional scores by hand, but quickly moved into computer engraving. Even as I started to conceive of different ways that I might be able to convey my musical ideas more concisely, I allowed the limitations of the notation software (and in 1994, notation software was significantly more limited than it is today) to direct me down certain notational paths. As I have become more certain about my musical ideas, I’ve begun pushing against the constraints of the software, goading it along a path towards creating scores that convey these ideas as clearly as possible.

For years, I’ve been writing a great deal of slow music representing sonic landscapes with some recognizable natural elements and others that are distorted in order to convey a sense of alienation. I’ve wanted a free sense of rubato in which some events begin simultaneously while others are displaced against each other, and in which these occurrences might have different internal rates of speed or emotional character. In order to communicate these thoughts in traditional notation, my rhythms became more and more complex and difficult to count, but in rehearsal I often found myself exhorting the players to ignore the specificity of the rhythm in order to feel the natural ebb and flow that I so carefully notated. In the following two-measure example from a piece for two pianos and percussion, for example, I needed seven different subdivisions of the quarter-note pulse in order to notate the various proportions, while my main concerns were in the way that the start of gestures aligned and in their ability to represent individual sound sources juxtaposed by their proximity. In order to accurately perform this passage, most ensembles need to conduct as they play, thereby gaining accuracy in their entrances but losing any ability to truly conceive of their individual parts as independent of the surrounding texture. 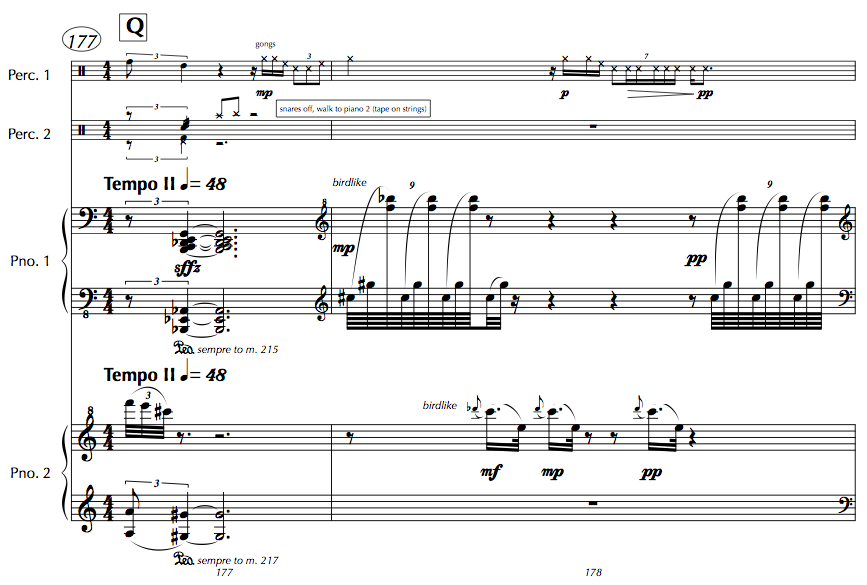 Looking back to many pieces in time-line notation and also to works of Crumb in which instruments are notated in their own graphic space with arrows indicating points of congruence, I began to work towards a notational system that would allow the musicians freedom within their parts while maintaining the ability to synchronize where desired.

In a non-opera for three singers (each personifying a character) and string quartet from 2011, I began to codify this system. The following performance indication (Example Two) at the bottom of the first page of the score gave the players a sense of the relative length of each note. This new system allowed for a freely proportional rhythmic notation appropriate for the misremembered lullaby and landscape painting of the music itself. In Example Three (below), you can see how it came together to allow for synchronization and independently flowing lines. The performers were able to get at the musicality of the passage in a way that I found completely satisfying, creating a sense of unpredictable flow at independent speeds without needing to count obtuse rhythmic figures. They were able to spend more time listening and less time counting. 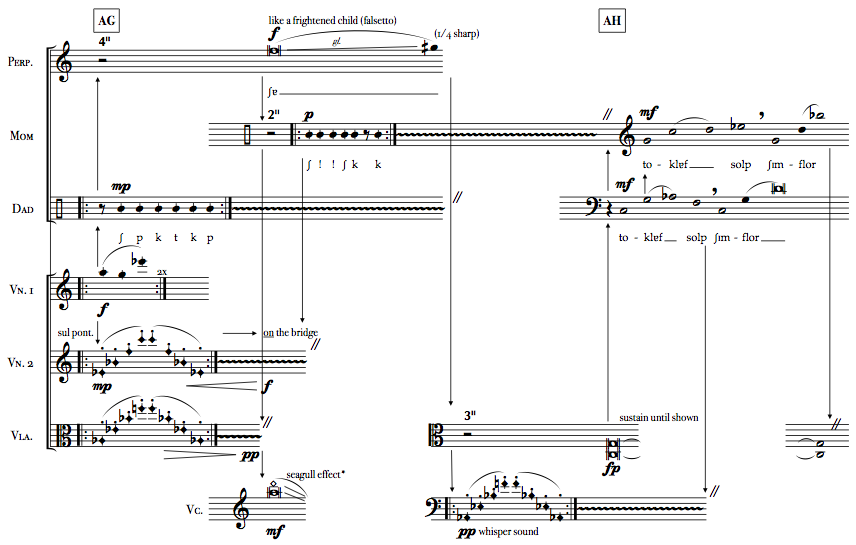 The problem with the notation illustrated above was that I didn’t leave room for any gradation between slow notes lasting one second and notes performed as fast as possible. As I’ve continued to develop this system, I’ve worked towards the following chart:

I’ve been surprised at how well this new notational system has worked for chamber ensembles of various sizes. In the following passage (engraved by an incredibly talented student composer, Viet Cuong, who is graduating from Peabody with his M.M. this year and beginning his studies at Princeton in the fall) for guitar quartet, in which the middle two guitars are slightly de-tuned, I was able to ask the outer players to listen to each other as they repeat their harmonics gesture in order to avoid synchronization. They quickly were able to create an echoing effect. Meanwhile, the faster runs in the middle two guitars sound like a cadenza against this background, and they can be performed at various rates of speed depending on the skill level of the performing musicians. When I’ve tried to utilize traditional notation to exactly represent passages with similar approaches to time, the performers have found them to be prohibitively difficult to learn, and they have often necessitated a conductor.

With this new system, when I’d like passages to be exactly synchronized, I can simply give the players a tempo and invoke traditional rhythmic notation. As you can see in the excerpt below, the advantage of this system for me is that, even in those instances, an additional part can explode freely beyond the bar lines in complex proportional relationships with the prevailing pulse as created by the performer in the moment. 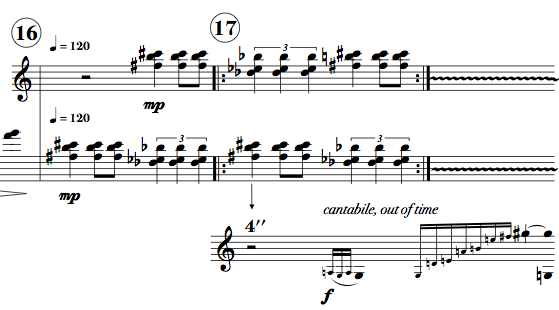 For me, the final test of this notational system was whether it could be applied to a large ensemble with a conductor. Quite recently, I was able to create a score for a concerto for toy piano and 15 other instruments, with the assistance of the crack engraving skills of Viet. Instead of parts, we produced a specific score tailored for each of the players, highlighting their individual part and accommodating their page turns. In order to allow for variations of the form of the piece in performance, the middle section of the concerto creates what the conductor has called a “choose your own adventure” scenario. In this area, the toy pianist can opt for any of nine musical phrases, playing each in any order at least once and no more than three times. At the end of each phrase, the ensemble performs one of six responses. Example Seven shows the toy piano cadenza, and Example Eight depicts the orchestral responses. 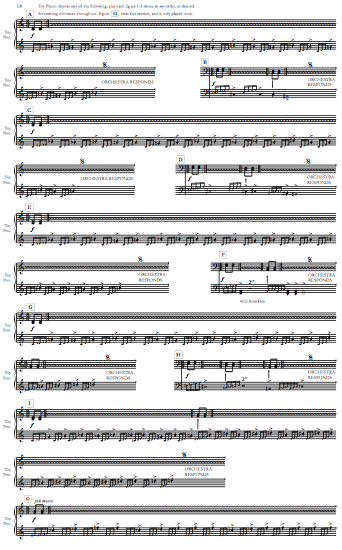 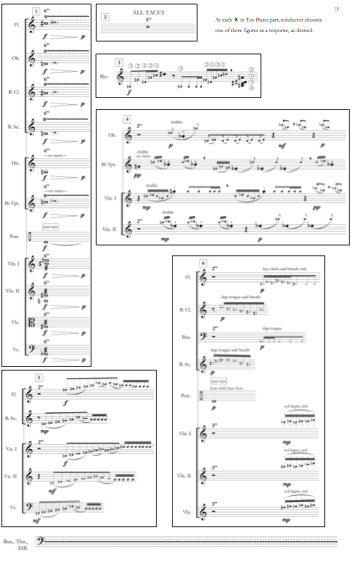 This new notation allows me to focus on my main compositional ideas and to simplify those elements that are less important for me. While a first glance might lead a musician to find these scores frighteningly obtuse, I’ve found that this system has helped to speed up rehearsals and to lead towards performances that more accurately convey my compositional intent.

*
If you’re interested in hearing what this notation sounds like in action, the Atlantic Guitar Quartet and the Great Noise Ensemble will be premiering the latter two pieces discussed above this Friday, in Baltimore and Washington, D.C., respectively, and I’ll post examples to my website this summer.