Everyone Has A Story
NewMusicBox
Written By

Everyone Has A Story

A few years ago I had an “Aha!” moment with a work of literature; Thornton Wilder’s play Our Town. Given that it took several rounds to fully appreciate a work of art written in my native language, it seems reasonable to suppose that there are times when it might require a similar, if not greater effort to find a doorway into a work of music. 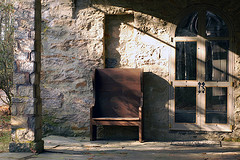 A few years ago I had an “Aha!” moment with a work of literature; Thornton Wilder’s play Our Town. Growing up, I must have seen this play three or four times, produced by my school, by other schools of childhood friends, summer camp—it’s a classic. But it never grabbed me; I found it melancholy, boring, and grew to rather dread the possibility of yet another production of the thing. So of course, on the day I arrived for a stay at the MacDowell Colony in 2008, a few of the writers in residence had scheduled (for after dinner entertainment) an informal reading of Our Town, which Wilder had worked on at MacDowell in 1937. Although at first I cringed at the thought, I got sucked in (friendly people, nice wine, these things happen), and a group of us sat around a roaring fireplace with our glasses of wine, picked character names out of a hat, and read the play out loud from start to finish.

By the end of the play I was speechless and near tears, having finally realized how beautiful and utterly human the work was. How could I possibly not have appreciated this before? The power of the story, which we had tapped into that night, had not faded a bit in the 70 years since its creation. When we were finished, we all sat in silence for a minute to let it all soak in. Being inside the play and reading those words out loud helped me “get it.” I don’t think I will ever forget that experience. From there I became more interested in Wilder’s other works, and I especially treasure a wonderful book of letters illustrating the—what seems quite unlikely—friendship of Wilder and Gertrude Stein.

Given that it took several rounds to fully appreciate a work of art written in my native language, it seems reasonable to suppose that there are times when it might require a similar, if not greater effort to find a doorway into a work of music. Andrew Ford makes this point (among several) in his wonderful recent essay “Why We Need Music.” That the rungs of the ladder to fully appreciating the abstract art of music include spending some extra time with music that one might not “get” upon first listen, so that it can reveal its secrets. This doesn’t work every time, and it’s perfectly fine to not “like” a piece of music if it has been given a chance and still not worked out. However, you never know unless you try. What if you just weren’t ready to discover what is special about that work until now?

Music, like literature, visual art, and so on, is the way some of us tell our stories and share our experience of life. It is not always laid out in a way that others want, or that anyone expects. Whether it is constructed from a 12-tone row or a three-chord chorus played on electric guitar doesn’t matter. In the end, the issues that we tend to fuss and fume about (at least in this space) melt into insignificance at the realization that regardless of how it is measured or evaluated, music is a form of communication. As those who choose to tell our stories in this very conceptual medium, we can be examples to others who may not experience it quite so directly by being open to, and making an effort to accept the creations that cross our paths. Regardless of our own feelings about whatever that work might be, there is bound to be someone out there—probably more than one person—who can relate to that story, or experience their own “Aha!” moment. Who knows, that person might be you.