Eric Nathan and Dan Visconti to Head to Rome

Composers Eric Nathan and Dan Visconti were named the two musical composition winners in the annual Rome Prize competition during a formal ceremony at the Metropolitan Club in New York City on Thursday, April 18, 2013.

Composers Eric Nathan and Dan Visconti were named the two musical composition winners in the annual Rome Prize competition during a formal ceremony at the Metropolitan Club in New York City on Thursday, April 18, 2013. Winners of the 2013-2014 Rome Prizes are provided with a fellowship that includes a stipend, a study or studio, and room and board for a period of six months to two years in Rome. Nathan has been named the winner of the Frederic A. Juilliard/Walter Damrosch Rome Prize; Visconti is the recipient of the Samuel Barber Rome Prize, named in honor of the American composer who was a Rome fellow in 1937 and again in 1947. 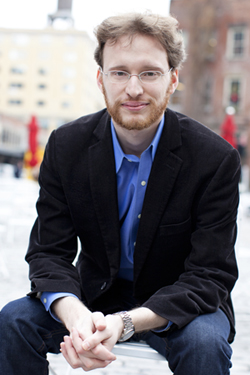 Nathan writes, “My Rome Prize project proposal is entitled Multitude, Solitude, which is, in short, to compose two new works related in various ways to the these two themes.” The two proposed new works are a symphony and a song cycle for soprano, baritone and chamber ensemble for the NY-based Ensemble Meme, inspired by the correspondence of Emily Dickinson and Thomas Wentworth Higginson.

Eric Nathan (born 1983) has been commissioned by the Tanglewood Music Center, St. Petersburg Chamber Philharmonic, the Daejeon Philharmonic Orchestra, and the Jerome Fund for New Music, and has been the recipient of numerous awards including a 2010 American Academy of Arts and Letters Charles Ives Scholarship, the 2011 ASCAP Foundation Rudolf Nissim Prize, the 2008 BMI William Schuman Prize, First Prize in the 2011 ASCAP/SCI National Student Commission Competition, and the 2012 ISCM-IAMIC Young Composer Award. He received his D.M.A. in composition from Cornell University, an M.M. from Indiana University, and his B.A. from Yale College. He also attended The Juilliard School Pre-College Division. 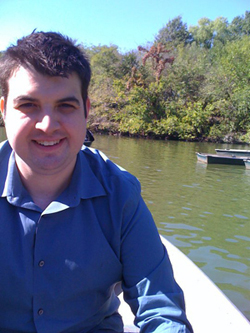 Dan Visconti (both 1982) has been commissioned by the Kronos Quartet, Triple Helix piano trio, the Berlin Philharmonic’s Scharoun Ensemble, and the Minnesota Orchestra (following his participation in the Minnesota Orchestra Composer’s Institute), and has been the recipient of the Berlin Prize, the Leonore Annenberg Fellowship in the Performing Arts, the Barlow Prize, and the Cleveland Arts Prize, as well as awards from the Fromm Foundation and the National Endowment for the Arts. As a recipient of the Douglas Moore Fellowship in American Opera, he completed a multi-year residency with opera companies including Seattle Opera, Opera Theatre St. Louis, New York City Opera, the Glimmerglass Festival, and the Metropolitan Opera. Visconti’s music was recently performed in Pakistan at concerts presented by Cultures in Harmony, an outreach organization promoting cross-cultural communication through music. He studied composition at the Cleveland Institute of Music and the Yale School of Music. (He has been a regular contributor to NewMusicBox since 2008.)

The American Academy in Rome announced a total of 31 fellows for the 2013-2014 year. In addition to musical composition, fellows are also named in the categories of ancient studies (6), architecture (2), design (2), historical preservation and conservation (3), landscape architecture (2), literature (2), medieval studies (3), modern Italian studies (2), Renaissance and early Modern studies (3), and visual arts (4). Founded in 1894, originally as the first graduate school of architecture for the United States, the American Academy in Rome emerged in its present form—a hybrid center for the arts and humanities—by 1912. With an 11-acre campus on the highest point within the walls of Rome, it remains the premier American overseas center for independent study and advanced research, a not-for-profit, private entity, the only academy in Rome not supported primarily or entirely by its government. Past recipients include composers Aaron Copland, John Adams, and Laurie Anderson as well as writers Ralph Ellison and William Styron, visual artists Philip Guston and Jenny Holzer, architect Louis Kahn, and classical scholar Richmond Lattimore. Prize recipients are annually selected through a national competition. Forty-four individuals were invited to make up nine peer juries to review the applications this year. The annual application deadline is November 1. For more information visit www.aarome.org.