It was striking how much the pieces changed over the 30-hour period between the two readings: everyone’s score was in sharper focus; the forms and overarching reach of each piece were much more comprehensible.

The first bit of our second EarShot day was spent finalizing any edits. The orchestra had set an 11:00 a.m. deadline for corrections and changes to be emailed to the library staff. Some of our edits necessitated a whole new part being generated, while other corrections could just be fixed via the infamous errata sheet: an itemized list of smaller things written as concisely as possible, such as “vln 1: m 4 beat 3 = F#”. Each of us had a fair amount of changes and adjustments, and at least one new part to print out in the case of major orchestrational shifts. In my own piece, the decisions I chewed on most had to do with some of my brass writing. What I had written for the trumpets at a particular 12-bar passage was certainly in their range, but it just wasn’t cutting through the orchestra. After talking with the player, he brought it to my attention that it was too low to have any carrying power, and that the horns could project it out much better (I ended up swapping the trumpet and horn materials in that section, to much better effect). Another issue in my trumpet writing had to do with selection of mutes: a passage I wrote for a trumpet with harmon mute seemed not to be speaking. In this case, the section was timbrally exposed enough that a switch to straight mute made it much clearer.

Between noon and 6:00 p.m., we were in a series of professional development seminars, with many local composers from the area in attendance (at least three local university composition departments were represented). Bill Holab gave two engaging presentations: one on engraving and the other on copyright and publishing. Bill is an authority in both of these areas, with years of experience at places like Schirmer publishing and running his own company (Bill Holab Music Publishing). Jesse Rosen, president of the League of American Orchestras, gave an overview of the orchestra industry, speaking about the ever-changing ways in which composers and orchestras have been working together over the last 25 years. John Nuechterlein, president of the American Composers Forum, and Ed Harsh, president of New Music USA, participated in a panel discussion with our mentor composers on community engagement. Each member of the panel spoke about their own experiences interacting with their local communities of musicians and audiences. The common theme here could be summed up as no (successful) composer is an island: the panel members, whether talking about working with a major orchestra or starting your own chamber music series, hammered home the necessity of connecting and interacting with a community. Particularly in this last session, but in the earlier ones as well, the questions and stimulating discussion between panel and audience could have kept going for at least another hour.

At 6:00 p.m., we met individually with conductor Matthew Kraemer. This was to check-in on our changes, and also provide a chance to develop a plan of attack for the final reading session. Starting at 7:00 p.m., each composer got around 25 to 30 minutes with the orchestra. After an introduction by the composer for the assembled audience, Matthew spent a generous amount of time touching up a few choice sections, and then ran the piece down from start to finish. It was striking how much the pieces changed over the 30-hour period between the two readings: everyone’s score was in sharper focus; the forms and overarching reach of each piece were much more comprehensible. Part of this is obviously the excellent level of musicianship in the group shining through after an initial sight-reading, but I think the opportunity for editing really made a world of difference. As works in progress, many things still needed to be fleshed out in each piece, but the audience response was overly positive. A brief on-stage post-concert discussion, led by Derek Bermel, elicited some thoughtful reactions and questions from the assembled crowd.

In lieu of recordings, which haven’t been made available yet, I’m posting a page from each composer’s score below as an example of their work. 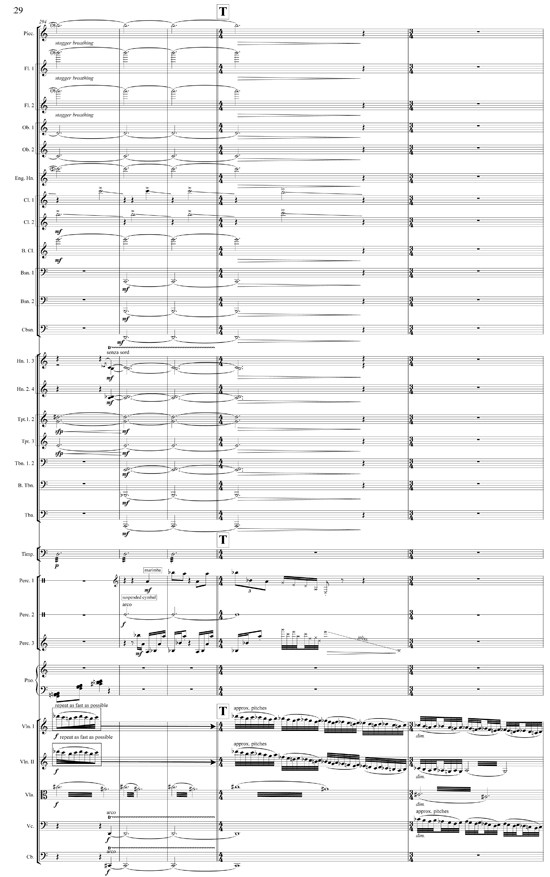 From Elizabeth Lim’s Disharmony of the Spheres 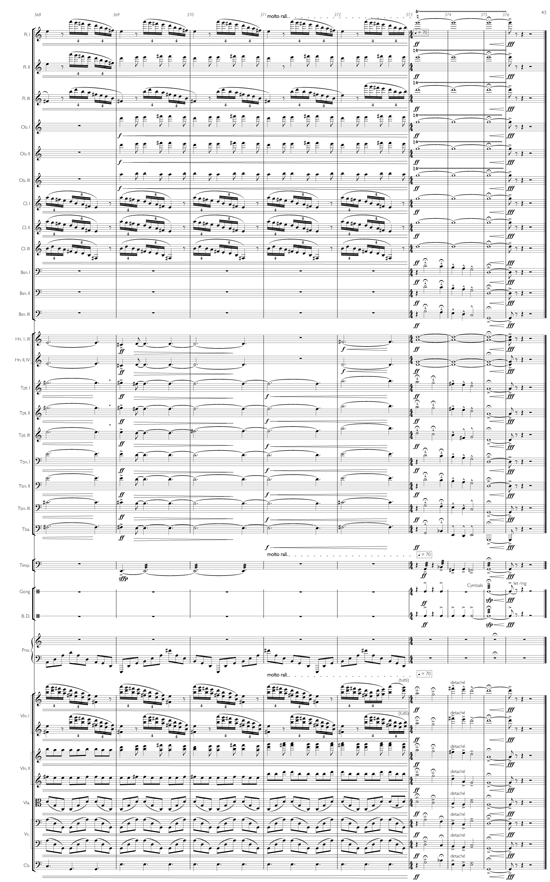 From David Marenberg’s The Abyssal Zone 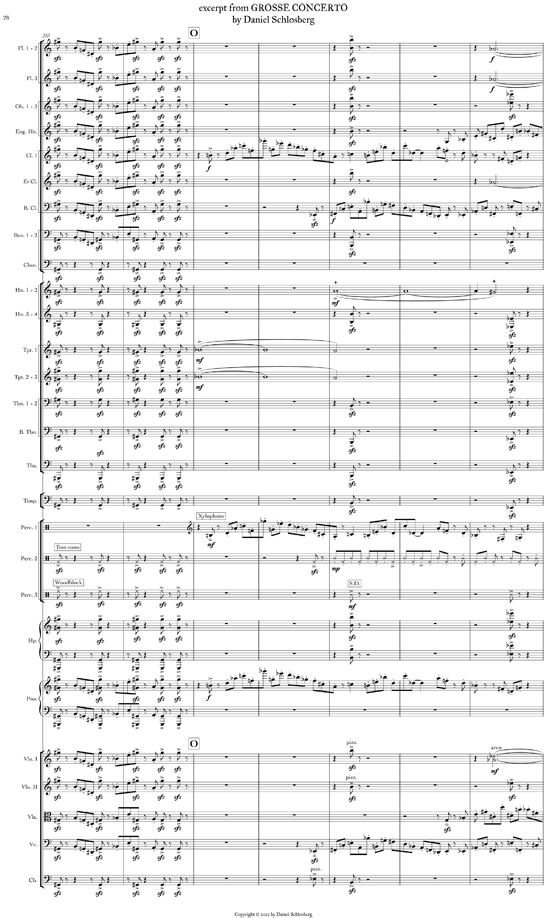 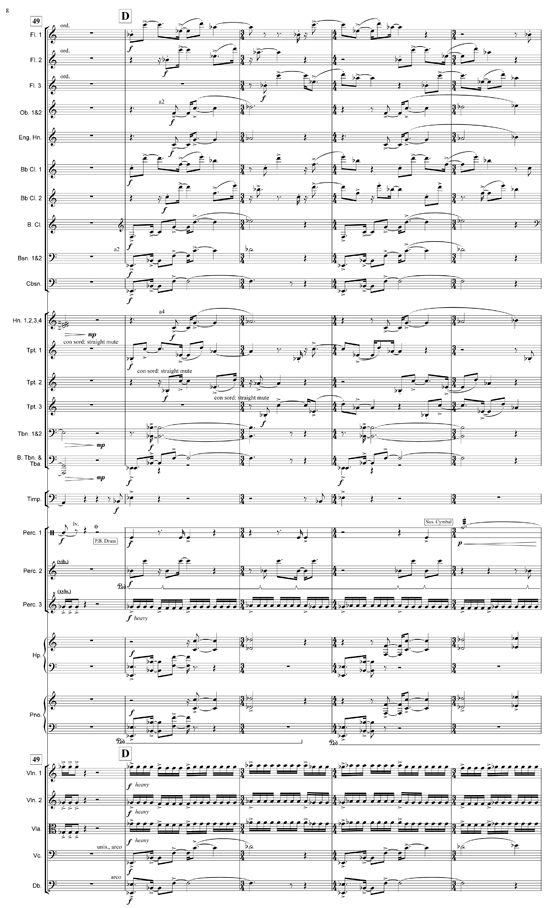 And a page from my own score, Bounce

After the show, we composers headed out to the Anchor Bar with ACO Operations Director Greg Evans, where we sampled a few different types of perhaps the best-known comestible innovation from our fair host city: the Buffalo wing. 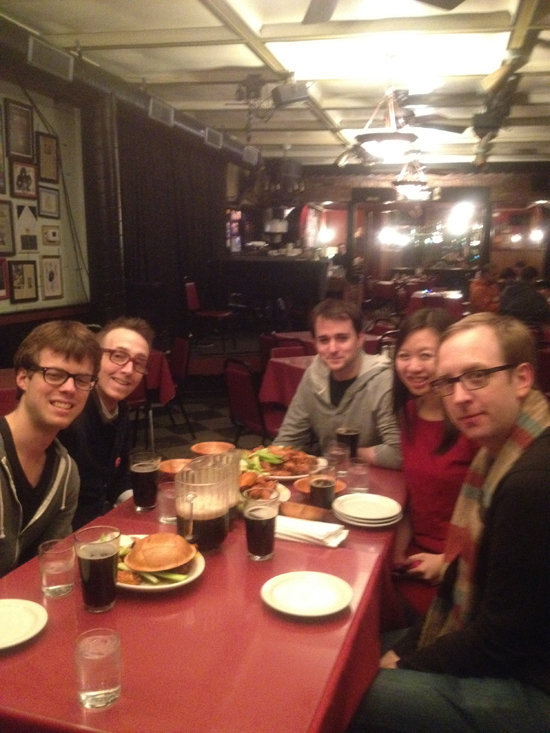