Duration and Attention
NewMusicBox
Written By

Admittedly all music—if we are fully paying attention to it—requires a time sacrifice. And music’s time-based perceptual design is something of a liability in a world where time is such an unavailable commodity. 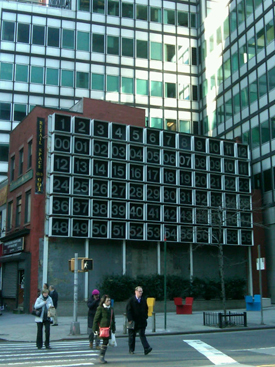 One of my favorite clocks of all time has always been this 45 by 50 ft. digital clock designed in 1971 by Rudolph de Harak (1924-2002) located at 200 Water Street (formerly known as 127 John Street), near Manhattan’s historic South Street Seaport. The clock didn’t seem to be working when I took this photograph earlier today, which is perhaps a sign of the times, but there’s a great 2009 video of it in working order on YouTube.

On Friday I finished reading Jeremy Grimshaw’s remarkable and indispensable book Draw a Straight Line and Follow It (Oxford University Press 2011). It is the first-book in English by a single author about the music of La Monte Young, the elusive “founding father of minimalism.” Aside from a 2010 book in French and a long out-of-print monograph published by Bucknell University Press collecting essays by eight authors, Grimshaw’s book is without precedent. But perhaps even more importantly, Draw a Straight Line does what only the most rewarding books about music do: it makes you want to immediately drop whatever else you’re doing to go and listen to the music. At least that’s what it did for me, so I decided to devote a substantial part of the weekend to doing just that.

In La Monte Young’s case, however, that’s not a particularly easy task. First off, there have been very few commercially released recordings of his music and most of them are out of print. On Sunday, I noticed that one such recording was selling for over a thousand dollars on Amazon Marketplace; so much for the notion that physical releases are no longer worth anything! But luckily I already have just about everything of Young’s that’s ever been put out in the world. Having access to the music, however, is merely step one. The second step is listening to it, and La Monte Young’s music requires a great deal of time. One of the few performances of his music that has been commercially recorded, The Melodic Version of The Second Dream Of The High Tension Line Stepdown Transformer From The Four Dreams Of China, clocks in at a little over 77 minutes; that’s short for him.

The Well-Tuned Piano, the work I was most eager to hear again after reading Grimshaw’s book, has become longer over time. His earliest realization of the composition, from June 4, 1964, is a mere 45 minutes. But by the early 1980s, the work had grown astronomically. The version commercially released by Gramavision on 5 LPs, CDs, or cassettes in 1987—capturing his performance of it on October 25, 1981—lasts exactly 5 hours, 1 minute, and 49 seconds. (Young’s subsequent accounts have lasted even longer. His performance from May 10, 1987—released on DVD in the year 2000—is nearly 6 ½ hours.) I have long treasured the 1981 performance, titled in Young’s shorthand as “81×25”. My very first exposure to La Monte Young’s music was in October 1982 at a public playback of a recording of that particular performance in the Dia Arts Center’s now legendary space on 6 Harrison Street in Lower Manhattan; back then such public playbacks were the only way to hear this music other than live performances, which occurred even more rarely. I bought the “81×25” LPs at Tower Records the day they were released. But as much as I am completely in love with this music every time I listen to it, the times I have listened have been as rare as performances of it. Five hours is a time commitment that is extremely difficult in our temporally challenged, reduced attention span era. I still haven’t found 24 hours to devote to The Flaming Lips’ 7 Skies H3 since first becoming aware of its existence last December.

It helped that it was so cold over the weekend that there was almost no incentive to go outside. But still, an uninterrupted five hours is an almost unprecedented luxury in my life at this point. Sadly I was not able to give it my complete and undivided attention. I did a few non-verbal household chores, and I spoke briefly from time to time as well—inevitably the phone rang at one point. For the most part, however, I stayed focused on it and I was very glad I did: I still remain as infatuated with it as I was during my first encounter with it nearly 30 years ago. In fact, hearing it with three decades of hindsight as well as insights gained from Grimshaw’s book (as well as Kyle Gann’s essay in the Bucknell book which I returned to as well) made me understand the unique tuning that La Monte Young developed for this piece and how that tuning shapes all of the melodic and harmonic progressions that Young explores therein.

However, attempting to listen to The Well-Tuned Piano again after several years (the last time I listened to it straight through was back in 2003 before I talked to La Monte Young for NewMusicBox) also begged a serious question about duration and attention. Admittedly all music—if we are fully paying attention to it—requires a time sacrifice, but there are few composers who demand as much from listeners as La Monte Young does. Music’s time-based perceptual design is something of a liability in a world where time is such an unavailable commodity. Other art forms suffer far less from a lack of time. While much more can be gained from looking at a painting or a sculpture for an extended period, you can still get something from an exposure of a few seconds. Literature, of course, can require an even greater time commitment than music, but at least the reader is in charge of the amount of time and how it is parsed out vis-à-vis the rest of one’s life. That said, I remember reading once that Edgar Allen Poe only wrote short stories because he wanted to control a reader’s time which he only felt was possible if he wrote texts that could be read in one sitting. Try reading a novel in one sitting. I tried doing just that recently with a novel I’ve been wanting to read for months which I felt would benefit from such an approach—Mathias Énard’s Zone (2009), which fills more than 500 pages with a single sentence. I was so worried about breaking the sentence that I thought the only way to effectively read it was when I had a long amount of uninterrupted time. The perfect reading prospect, I thought, would be my flight back from Paris to New York a couple of weeks ago. But other things vied for my attention and I wound up only getting ¼ of the way through the novel, even though I was very intrigued by what I had read up to that point. Since returning home I have not picked up the book again, although I’m eager to read the rest of it; I’m just not sure how to recreate the ideal reading conditions for it in the near future.

Obviously Énard’s novel is something of an anomaly in literature. Music, on the other hand, always requires scheduling for the time we set aside to listen to it. As of yet no one has devised a form of speed reading or things like Monarch and Cliff Notes for getting through very long musical compositions—although perhaps that’s what Schenkerian analysis is ultimately about. Anyway, such shortcuts would never work for the music of La Monte Young, which is specifically about perceiving details through temporal stasis or near stasis, as is the case with an ever-changing work like The Well-Tuned Piano. But I still wish there were a way to somehow literally make time stand still in my day-to-day existence, the way La Monte Young does in his music, in order to enable me to experience music like his more frequently. Maybe that’s why I love flying against the time zone during the day so much: you get all those extra hours. Yes, I know, you’re not really getting extra time since you lost the hours going in the other direction, but that’s usually just lost sleep.