The irony of intimacy found in a giant old warehouse is not lost on me, but the cordoning off of spaces within these huge buildings makes for a very personal and connected chamber music experience.

Funky warehouses are being cleaned up and repurposed at a record pace here in Austin. As the city grows and its rents rise, many artists have found their way to the outskirts of town to utilize spaces in various states of renovation and renewal. Among the most recent additions is Canopy, which houses a variety of sleek spaces for artists of all stripes. I headed over there to check out line upon line percussion’s most recent Austin show, a showcase that featured two new premiers, one classic hit, and one golden oldie. I strolled past several units in which painters and other visual artists were holding court, some actively working on new pieces while others chatted about existing work with patrons. At the end of a line of such units, I found the venue; a large open space with groups of instruments around the perimeter. The setup made for a series of little vignettes, and the audience was invited to grab folding chairs and place them wherever they liked (and move them as they pleased) to experience each piece. 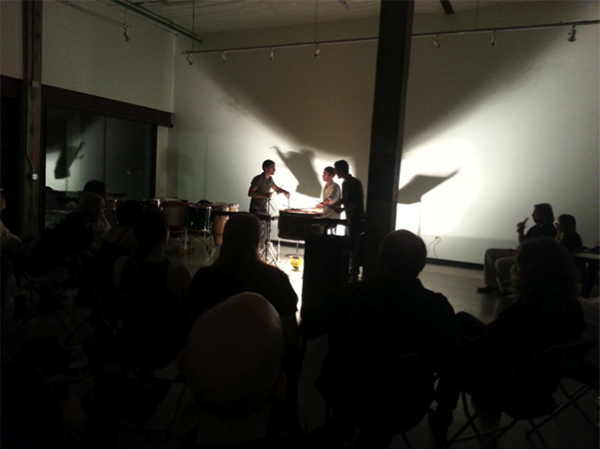 In recent years, line upon line has been on a real commissioning tear, and their list of upcoming projects is long, stretching over the next few years. This show started with a last-minute addition of one of their earliest commissions, Steve Snowden’s A Man with a Gun Lives Here. I have seen them perform this piece many times, and each performance is spirited, alive, and as full of wonder and humor as the work itself. The three players surround the bass drum and their interaction during the performance goes beyond the simply musical and becomes somewhat theatrical. Brush swoops, stick exchanges, and the passing of a bag of buckshot all serve to visually illustrate the music.  This rendition was no different and these dynamic elements played well with audience members young and old. Following the Snowden was Kate Soper’s In the Reign of Harad IV, commissioned with the support of Chamber Music America. In three movements with no pause, the work featured a sort of fractured speech stuttered among the three players. Each performer engaged their particular kit in fits and starts with each instrumental grouping popping in and out in musical chunks reminiscent of tape splits. 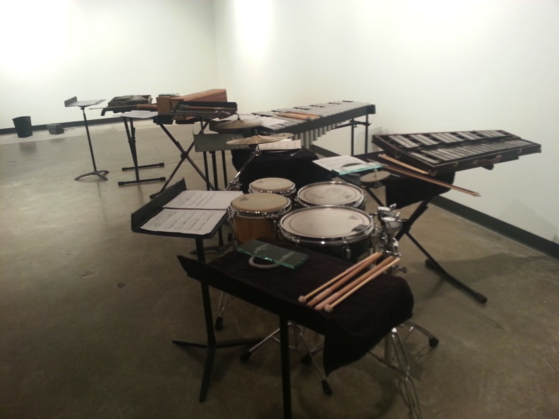 While specific words and phrases were difficult to discern, the small figurations developed their own syntax; some declamatory, others questioning, and all part of a conversation that was at once familiar and foreign. Contrasting the large setup for the Soper, Ben Issacs’s Several Inflections called for each performer to have only the top octave (give or take) of the vibraphone removed and placed on a small stand, arranged on top of a bit of curled rubber tubing. This arrangement allowed for all the attack normally associated with the vibraphone but none of the resonance. The piece was described by line upon line member Adam Bedell (he actually recounted a description from a friend who attended a rehearsal) as “sounding like wind chimes,” which might initially bring to mind a simple, wandering texture, but my impression (while positive!) was anything but relaxed. Fragile, nervous, and anxious were all terms that came to mind, not only because of the aural impression but also because of the performance requirements. An overall extremely quiet dynamic profile (we waited until the AC was shut off before they began the work) coupled with a rapid texture that, while measured, often felt (and occasionally looked) like various overlapping nervous tremolos all made for a very intimate and slightly anxious experience; like chopsticks on tiny deconstructed chimes. It didn’t sound like Scirrano, but there was that “approaching the edge of silence” element that kept me on the edge of my seat. 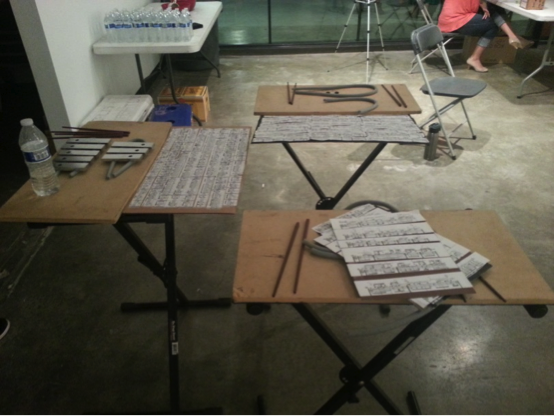 The work can last anywhere from six minutes to two hours, but in this case was closer to the ten-minute mark. The score was highly detailed and specific, and the lengths to which any ensemble would need to go to prepare and present the work are substantial. The show wrapped up with a fantastic rendition of Xenakis’s Okho. Written for three djembes but realized here on three connected drum sets that included tom-toms, congas, and a shared bass drum, Ohko could not have struck more of a contrast to the Isaacs, and the dynamic release coupled with the performers’ physicality felt like cliff-diving after meditation. You know you’ve got a concert on your hands when the Xenakis is the palate cleanser, and the polyrhythms running around that room had heads bobbing and people fully engaged, including a few munchkins outside.

The second stop on my reclaimed warehouse chamber music tour was the Museum of Human Achievement to see the German improv trio Konk Pack presented by Epistrophy Arts. The trio includes analog synthesist Thomas Lehn, drummer Roger Turner, and Tim Hodgkinson of Henry Cow fame whose work with co-founder Fred Frith left an indelible impression on progressive rock of the late ’70s. I’ve seen many improv groups play over the years, but very few exhibited the level of communication on display at the MOHA. Gone were the rounded edges and long transformations often associated with free improv and in their place were crisp transitions, precise timbral choices, and telekinetic, turn-on-a-dime shifts in the music. Particularly impressive in this embarrassment of riches was the impressive exchange of timbre and rhythm between Lehn’s synth and Turner’s drums. Granted, the analog synths have a visceral nature and connection to the primary elements of music in much the same way drums do, but it takes deft manipulation by both parties to connect the two so seamlessly that at times I wasn’t sure who was playing what. It’s worth noting that Turner was not amplified, so everything he played was purely acoustic. 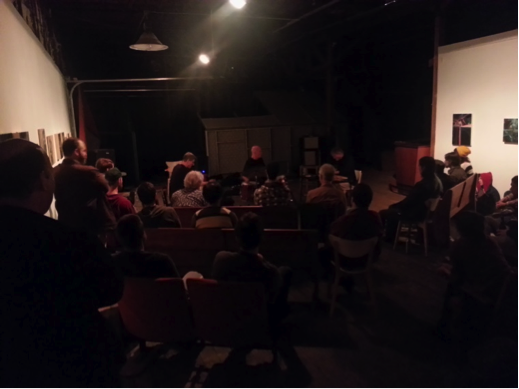 Konk Pack at the Museum of Human Achievement

Not to be left out, Hodgkinson’s work on the lap steel guitar melded similarly with the synth, especially in the high registers. And while the lappy was not without modest processing, the lion’s share of the sound was coming from his hands, not from stompboxes or other devices. Plucking behind the nut, staccato punctuations, and karate chops to the midsection of the neck resulted in gorgeous reverberations, like gongs rich with overtones. Many of these sounds and textures sat squarely in the same timbral wheelhouse as the analog synth, and I had several, “Where did that come from?” moments listening to the guitar/synth pairing as well. It was less like a typical improv show and more like a concept album that developed right in front of you. One “piece” started with Lehn’s synth chugging along in the lower register, skirting the line between pitch and rhythm. This was picked up by Turner rhythmically in the bass and toms and “melodically” by taking a dowel, striking it against the rim of one of the toms and drawing it towards himself as it rapidly rebounded,  creating a tremolo that had distinct, rising pitch characteristics. As those pitches ascended, Hodgkinson took the cue, coaxing similar pitch and motion from the lap steel. This material developed in a strikingly linear way, with little of the wandering and tangential characteristics of your less experienced improv teams. The term “sound world” is thrown around quite a bit to denote the particular style of a given composer or work, but Konk Pack was able to create several shifting sound worlds, all connected, but each with their own distinct characteristics as well.

I love chamber music. I love the intimacy between audience and performers. I never thought it odd to hear a string quartet in a seven-hundred seat hall, but when I started going to smaller shows I began to see (and hear) things differently. The irony of intimacy found in a giant old warehouse is not lost on me, but the cordoning off of spaces within these huge buildings makes for a very personal and connected experience. (The only tricky part is that I feel a little awkward taking pictures during these shows, but I suppose that speaks to the nature of what we’re experiencing as a smaller audience and performing group.) Whether it’s at a brand new space like Canopy or a somewhat more funky room like MOHA, the chance to sit up close to performers as they work their magic is what chamber music is all about, and I’m glad to see that opportunities like this in Austin are on the rise.