This is the first of a four-part series about operatic voice classification for the 21st century which will explore the ever-changing system of voice type in classical singing through a transgender lens. All experiences expressed here are mine and do not reflect those of transgender and/or nonbinary people in general.

My path as an opera singer has been a strange one. I started out as a coloratura mezzo-soprano with a high range, but then I slowly developed into a low, full lyric mezzo. Then, just when I thought my voice couldn’t get any lower (or higher), both occurred when I started hormone replacement therapy (testosterone) as part of my medical transition. Now, my countertenor range sits higher than my mezzo range did, but my chest voice’s range is that of a low tenor. If I were to step into an audition tomorrow, what could I possibly list as my voice type?

Granted, this isn’t anywhere near the average experience for an opera singer. It’s estimated that about 0.6% of the United States population identifies as transgender. Even fewer people identify outside the gender binary. While the mere existence of trans and nonbinary artists should be enough to change things, I’m not arguing for an ungendered system of voice types for our sake alone. However, my experience as a transgender nonbinary singer has led me to question the effectiveness of the voice type classifications that we currently have in place.

I began my operatic career as a female-presenting mezzo-soprano. I almost exclusively played trouser roles, first out of coincidence and later out of desire. It was during my preparation for these trouser roles that I first discovered the online transgender community. Even though I was 19 at the time, this was my first introduction to the idea of transitioning and the first glimpse of something that had been nagging at me since I was very young. I’ve always felt out of sorts in the gender binary, but I could never pinpoint the issue or explain how I was feeling. For example, when I was in third grade and we used the gym locker rooms for the first time, I didn’t understand why I was in the girls’ locker room. I lived with the pressing anxiety that they’d find out I was a fraud and assign a punishment. But feelings like this were inexplicable to me at the time, and for long after. As an opera singer, I loved learning how to present male onstage. It felt comfortable and right, like pulling on a well-loved, nostalgia-inducing sweatshirt that I’d found unexpectedly in the back of the closet after giving it up for lost. While playing those roles, I felt, for the first time, something much more like “me.”

My time as a graduate student in the Vocal Arts Program at Bard College Conservatory served as the catalyst for my acknowledgement of my gender identity and the beginning of my social transition. The faculty there, Kayo Iwama and Dawn Upshaw especially, continually pushed me to dig deeper, to understand myself, and to be myself without reserve or shame. With this new courage and some study of gender theory, I started to put things into place. 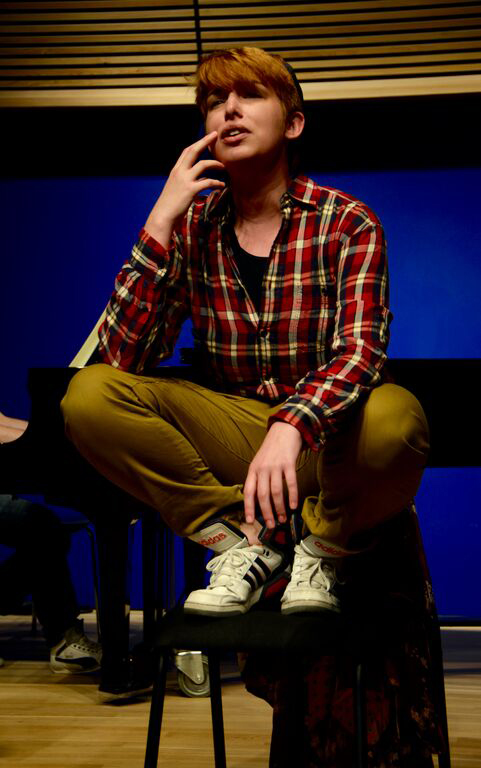 As I came into myself, my physical dysphoria made everyday life extremely difficult and I could no longer put off starting hormones. I’d never intended to take hormones, because I wanted to keep my mezzo-soprano voice. The vocal changes caused by testosterone are inevitable and irreversible. When I had to choose between myself and my voice, I had to choose myself. It has absolutely paid off, since I’m more myself and more centered than I’ve ever been before. I’ve accepted my new voice, no matter what it is or will be, and I’ve grieved my mezzo-soprano voice as I’ve grieved the end of a relationship or the completion of a spectacular experience. But that’s a story for another time.

We can’t assume that a transgender singer has experienced, or will experience, a vocal change. Hormones do not make someone any less/more “legitimate” or “trans.” They were necessary for me, but they’re not necessary for everyone. There is no universal trans experience. My experience is singular. It might resemble someone else’s, but it equally might be completely different. Therefore, trans singers could fall into any of the current voice types.

Let’s return to my first question about the hypothetical audition and dig into that a bit. Let’s say, for argument’s sake, that I’ve decided to train and identify as a countertenor. I’ll be walking in with a resume full of mezzo-soprano roles, male clothing, and an androgynous appearance. Since I’ve written “countertenor” on my resume, most judges will assume that I identify as male. Since many mezzo-soprano and countertenor roles overlap, there will be less question of what I’m capable of singing. However, when the audition panelists read further down my resume, they’ll see that I’ve played female roles that are generally sung by cisgender women, such as Hermia and Jo March, in addition to my trouser roles. They may have read my biography and know my current gender identity, but they may not have. They have a lot of material to work through and it’s not on them to know or remember my gender identity. Unfortunately, this may lead to confusion that overshadows my singing, making the audition interaction more about my gender than my performance. Perhaps this is an issue caused by the lack of gender education in our society. Regardless, the outcome is the same.

I can’t count the number of times I’ve heard mentors tell singers, myself included, to go out of their way not to “confuse” the panel by listing roles of different voice types on their resume. This isn’t to say that audition panelists are uneducated or incapable; it’s to illuminate the fact that auditions are short and your singing is easily overshadowed by a preoccupation with other details or the unintended bias caused by those details.

Let’s go to a more common example. Imagine a soprano who has just changed her voice type from mezzo-soprano to soprano. She’s immediately at a disadvantage if she lists every role that she’s performed on her resume, because it will immediately cause the review panel to question the legitimacy of her soprano-ness. The next inevitable step is that they’ll question her ability to sing the role for which she’s currently auditioning. This isn’t a gender issue any longer, but rather an issue of the current classification system’s inability to handle change.

And perhaps you’re thinking, “Our current voice types aren’t inherently gendered. What’s the issue?” Stay tuned, because while I won’t get to that here, I’ll go more in-depth into that aspect of the discussion in the next part of this series.

Voice type classification doesn’t only relate to the vocalists performing existing repertoire – this system also relates to the operatic roles we’re creating now and the roles we will create in the future. As a librettist, I’ve found that the current system severely limits and/or complicates the characters I write. When I write a trans or nonbinary character, many composers (rightfully) ask, “How do I write for this?” or “How do I identify it in terms of casting?” It’s quickly discovered that it’s not enough information to state a range or a standard voice type.

In the past, opera has intelligently dealt with the gender/voice interaction with its trouser and skirt roles. It’s still working with a gender binary, but it made a point of deciding how best to express certain variations and experiences in gender. I believe that changing the voice classification system can continue that adeptness into the future of the art form, allowing opera to continue to grow. The system has been purposefully designed; it can similarly be redesigned.

More and more trans artists are realizing that they can be both trans and an opera singer, something I once believed impossible. How can we be welcoming to their presence and artistry if the very structure of our system works against them? We’ve revised the operatic structure again and again, allowing it to flourish for hundreds of years. We can do it again to dismantle barriers for gender-diverse artists.

I’ve asked a lot of questions and I’ve purposely left most of them unanswered. First, I’m not a pedagogue; I’m speaking from my experience and the experiences that others have shared with me. Second, I don’t think that this is something that should be decided by one person. I’m far more interested in opening up the conversation to as many as are interested as a way to lead to a change in protocol. In later parts of this series, I’ll map out my ideas for the necessary elements of this new voice type classification system and how we can begin to combine these into a new system.

In the end, the onus should be on the system to support and correctly describe the artists within it, not on the artists to fit within its established parameters. A system that no longer serves its purpose, or that cannot expand to meet its purpose, must be redesigned.