Do You Hear the People Sing? Music and Protest in the Street

In a crowd, nuance fades away. When the argument is literally framed by a fence in the street, the question of “which side are you on?” can take on a certain stark, if ultimately artificial, clarity. 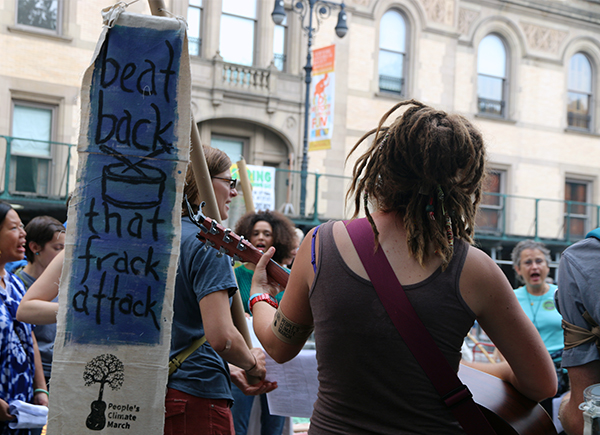 All images and video by Molly Sheridan

Last week offered remarkable opportunities to contemplate the intersection of music and protest. For the 300,000-plus people participating in the People’s Climate March in New York City, music was a way to transmit a message over the roar of the crowded streets, to express solidarity with one another, and frankly to keep spirits up during the hours-long process of waiting and walking the jam-packed two-mile parade route.

Musicians met and mingled and joined in impromptu group performances of “When the Saints Go Marching In” and “This Little Light of Mine,” the lyrics often tweaked to suit the environmental occasion. When a moment of silent reflection was observed at 1 p.m., it was all the more powerful as a result.


The next evening in a small park across the street from Lincoln Center, the situation was somewhat reversed. Music was absent as a coalition of organizations gathered with the explicit goal of forcing the cancellation of the Met’s planned production of John Adams’s The Death of Klinghoffer this season. A crowd of roughly 400, including a bussed-in delegation of high school students, listened as speakers passionately objected to what they considered the opera’s glorification of terrorism and its anti-Semitic libretto.

In a crowd, nuance fades away of course. When the argument is literally framed by a fence in the street, the question of “which side are you on?” can take on a certain stark, if ultimately artificial, clarity. 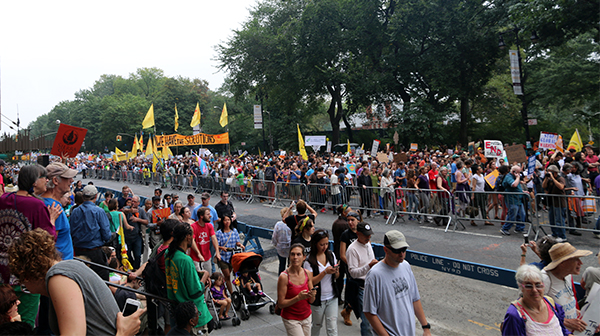 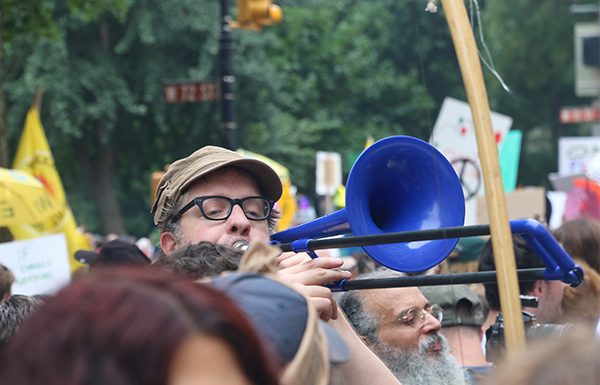 I reflected on this first during the climate march. There weren’t really spectators for this action, I noticed. Even the weary participants who eventually camped out on stairs and railings along the sides of the route often still held their placards or snapped pictures which, one assumes, would soon appear on their social media channels with opinions, explicit or implied, attached. Actually addressing climate change is immensely challenging, but in this crowd opinions were paired down to whatever would fit on a banner or into a six-syllable lyric. Sentiments were neat in their simplicity. 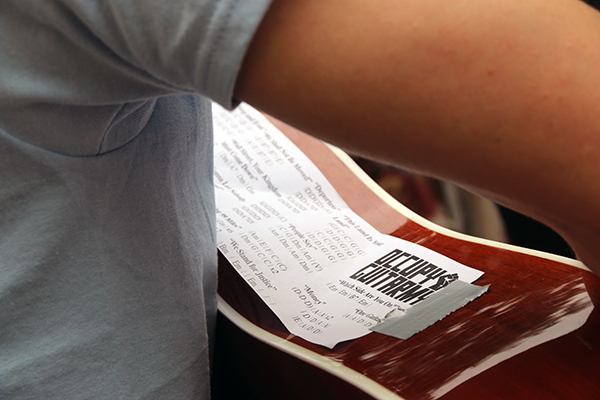 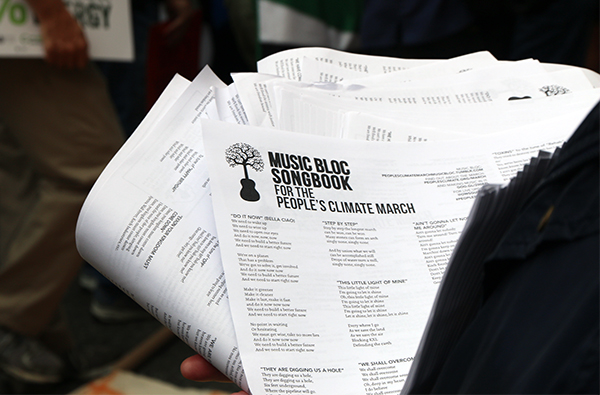 The Klinghoffer protest offered something both more aggressive and more complex. One lone man who was clearly espousing anti-Semetic sentiments based on his large placard was placed in his own special fenced area at the rear of the action before being moved across the street. And those protesting the production mostly held one of a few versions of pre-made signs, so their alliance was clear. The speeches from the podium became increasingly heated as the event wore on. 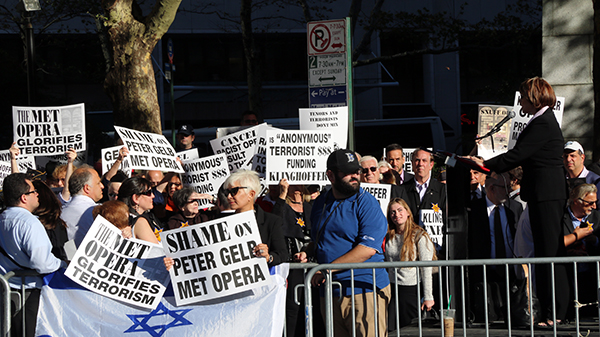 Taking up the mantle of investigative journalist, I started questioning these holders of poster board. Have you seen the opera? Have you heard the opera? Almost everyone I asked—a sample size of 15 or so, so take it for what you will—said that they had not. Some delivered this with a notable amount of pride or disgust at the suggestion that they would have endured such a thing. One woman appeared confused, because, as she informed me, the production “had not opened yet.”

So I was admittedly feeling a little dismissive when two things happened. First, a woman I asked about hearing the opera explained that she had listened to excerpts of it online and she then spoke passionately about why she found it incredibly offensive and inappropriate. I thanked her for her thoughts, but I realized as I turned away that I wasn’t, if I was being honest, really hearing her at all because I had already formed my own tightly held opinions and wasn’t listening. This was underlined with the bluntness of a made-for-TV movie a few moments later when a group of high school kids unaffiliated with the protest stopped near me and asked what was happening. I tried to explain it as even-handedly as I could—they were students, after all—and I was surprised by how thoughtfully they considered the issues at stake, even asking follow-up questions about the real-life events that led to the opera. This was the most productive bit of conversation I had had about the situation all week. Afterward, by truly listening to the various speakers without the earplugs of my own judgment, I began to hear how the root of the protest was actually less about John Adams’s opera, and more—especially since many were not directly familiar with the piece—about broader fears over examples of hate and terrorism and violence, from 9/11 to beheadings in the desert. 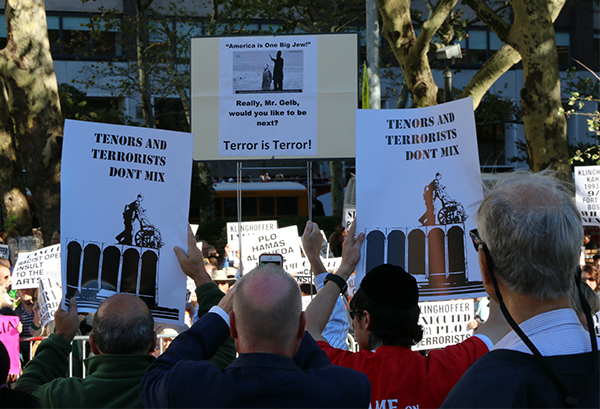 This did not suddenly make demands for the cancellation of The Death of Klinghoffer acceptable to me, but it did produce a more constructive framework for a conversation about the opera. Unfortunately, we were not gathered to have a conversation. We were in the street where the only response requested seemed to be to a single question: “Which side are you on?”

The night before the protest and away from the asphalt, Justin Davidson laid out a powerful analysis of the opera itself for New York Magazine‘s Vulture website (“The Trouble With Klinghoffer Isn’t Quite What You Think“), and James Jorden, writing for the New York Observer (“In Defense of ‘Klinghoffer’“), offered eloquent comments related to some of the same anxieties I felt that night on the plaza:

The function of art, or a least of high art, is not to reinforce existing prejudices. A work of art is not supposed to agree with us any more than we are required to agree with it. On the contrary, art is supposed to inspire a dialogue, even an argument with the spectator and with society as a whole. If that dialogue is quashed by a few hundred, or even thousands of protesters, then art cannot exist.

Earlier this year when reporting on the cancellation of the HD simulcasts of The Death of Klinghoffer, I was called out on this site by a reader for failing to rally unequivocally to the opera’s defense. I don’t deny that there is a time and place for such action, but then as now, I’m actually more concerned that we take care to actually listen to the music and the responses of those around us to it. Shouting either into silence seems to me the most damning outcome of all.