Do You Have the Chutzpah to Take a Gamble on Fair Use?

Everything you’ve heard about fair use is probably wrong. It’s always a gamble as to whether something is or isn’t a fair use and, in my humble opinion, courts have recently shown a lot of chutzpah in making the determination. 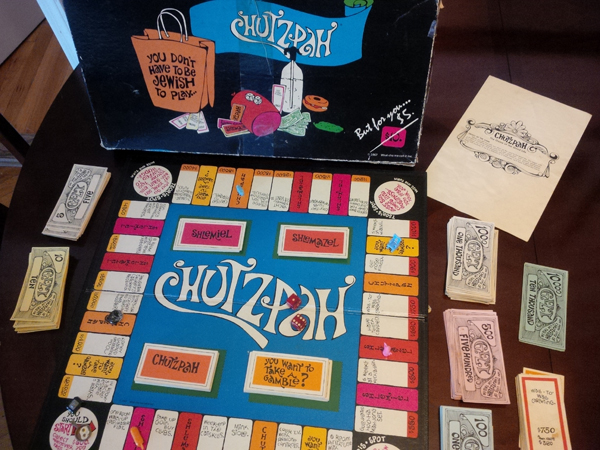 When I was a kid, my siblings and I played a board game called Chutzpah, which is a lot like Monopoly only the “properties” weren’t things like Boardwalk, Park Place, and Marvin Gardens but Son Marky’s Bar Mitzvah with Velvet Yarmulkes, Weekend in the Catskills, and Yacht Named Gevalt III. And rather than draw cards labeled Community Chest or Chance, you had four options: Schlemiel, Schlemazel, Chutzpah, and Do You Want to Take a Gamble. And instead of getting thrown in jail, you’d miss a turn if you landed on a “tsoris spot”—which is not the same as a tourist spot, I assure you!

For those of you who didn’t grow up in New York or laughing to Jewish comedians, here are brief explanations for these lovely Yiddish words. You’re at a dinner party and the guy next to you spills hot soup in your lap. The spiller is the schlemiel and you, the spillee, are the schlemazel. Tsoris means all manner of troubles, like getting the proverbial boil on your behind. And the concept of chutzpah (blandly translated as “guts” or “nerve” and more colorfully exemplified by variations on the theme of having a brass pair) is best illustrated with this classic example: a young man murders his parents and then pleads for mercy because he’s an orphan.

So, you wanna play? C’mon over to my place and I’ll break out the original 1967 edition. In the meantime, try your hand at the titular test, otherwise known as “Everything You’ve Heard about Fair Use is Probably Wrong.” It’s always a gamble as to whether something is or isn’t a fair use and, in my humble opinion, courts have recently shown a lot of chutzpah in making the determination.

Today’s “spot the fair use” game (not to be confused with “spot the looney”) consists of just two multiple choice questions:

1. How many of the following statements are true?

A) People have fair use rights.
B) There are specific rules on what is and isn’t a fair use.
C) Fair use determinations are governed by a particular provision of the Copyright Act.
D) Every determination of fair use must be made on a case-by-case basis.
E) Fair use is a defense to copyright infringement.

2. Assuming each example involves a use of a work still under copyright, which of the following constitutes fair use?

As for the first answer, the correct response is C, D and E. The answer to the second question is G. (That’s also the answer you’re most likely to get when you ask a lawyer a question, assuming he doesn’t first respond with two more questions.)

Now, in order to explain these answers, I’ll need to provide a little background with the caveat that, for true copyright mavens, my jaunt into the forest of fair use jurisprudence is kind of like the Classic Comics or Cliff’s Notes version of a copyright casebook.

Fair use was originally an English common law (case law) doctrine that was first incorporated into US law in the 1841 Supreme Court case Folsom v. Marsh. Writing for the Court, Justice Story (yes, that was his name) set forth a multi-factor test to determine fair use: “Look to the nature and objects of the selections made, the quantity and value of the materials used, and the degree in which the use may prejudice the sale, or diminish the profits, or supersede the objects, of the original work.” Ever since the current federal Copyright Law became effective in 1978, a restatement of Justice Story’s fair use test has been codified in Section 107 of the statute, which states:

Notwithstanding the provisions of sections 106 and 106A, fair use of a copyrighted work, including such use by reproduction in copies or phonorecords or by any other means specified by that section, for purposes such as criticism, comment, news reporting, teaching (including multiple copies for classroom use), scholarship, or research, is not an infringement of copyright. In determining whether the use made of a work in any particular case is a fair use the factors to be considered shall include—

(1) the purpose and character of the use, including whether such use is of a commercial nature or is for nonprofit educational purposes;

(2) the nature of the copyrighted work;

(3) the amount and substantiality of the portion used in relation to the copyrighted work as a whole; and

(4) the effect of the use upon the potential market for or value of the copyrighted work.

The fact that a work is unpublished shall not itself bar a finding of fair use if such finding is made upon consideration of all the above factors.

So what do we learn from parsing the previous paragraph? First, fair use is governed by a specific statutory provision. Second, as the Supreme Court made clear in the 1994 case Campbell v. Acuff Rose Music (concerning 2 Live Crew’s parody of the Orbison classic, “Oh, Pretty Woman” and which I’ll be discussing in my next post), a determination of fair use involves the application and weighing of the four statutory factors and therefore “is not to be simplified with bright line rules, for the statute, like the doctrine it recognizes, calls for case by case analysis.” Third, as Judge Easterbrook reminded us in a case from last year, “[f]air use is a statutory defense to infringement.” It’s not a “right,” despite whatever Prof. Lessig and his acolytes may write. So there’s your answer to the first question.

Explaining the answer to the second question involves applying the foregoing factors to each situation, although in the interest of brevity, I won’t apply all four to each example.

A. Reprinting or quoting four bars of music

Let’s look at the third factor first. Which four bars are you using? Is it the main hook in the chorus of your favorite pop song or four measures of the verse? Or for a classical work, would you be using four bars of the iconic brass theme from Fanfare for the Common Man or a few measures from the percussion parts? Not all four measures of a work are of equal importance—especially in songs. Let’s also consider the first factor. Are you reprinting four measures from a Beatles song in a scholarly article on their use of modal harmonies or are you taking the title hook from “She Loves You” and putting it in your own commercially released song (fourth factor as well)? In each example, the first use is more likely to be considered a fair use than the second.

B. Posting a 30-second clip of song or a movie on your web site

Again, considering the third factor, which thirty seconds are you using? It makes a difference whether you’re posting a critical “spoiler” scene from a newly released blockbuster (which also affects the fourth factor) as opposed to a clip from the official trailer which is intended for promotional purposes. Also, are you posting clips because you’re a fan of the band or the film and you’re linking to places where you can legitimately purchase the works or are you using these clips to link either to pirate sites or as a means to get eyeballs on your site to sell your own stuff? This involves consideration of the first and fourth factors.

C. Putting only one line of a lyric on a T-shirt

I’ll bet you can see where this is going: Which line—one from the chorus that includes the song’s title (although titles are not copyrightable) or a line from the middle of the third verse (third factor)? Are you selling these for profit or using them as an inspirational slogan to raise funds for a charity (first and fourth factors)?

D. Creating a painting that incorporates but modifies a pre-existing image

Okay, I’ll bet you’re getting pretty good at this game by now. Are you incorporating the entire image, the main focus of the image, or just something in the background of the image (third factor)? Are you incorporating a black and white photograph and adding color, changing the perspective, or distorting the image (second factor)? Are you selling your painting in a gallery or using it to demonstrate painting techniques to art students (first and fourth factors)?

*
All of the foregoing are examples of the analysis that lawyers and judges use in determining whether an unauthorized use of a copyrighted work constitutes infringement or fair use, and none are definitively permissible. No simple bright-line rules; just an ad hoc analysis fudging the application of four statutory factors.

Now what if I said that everything I just told you is wrong (or at least not entirely right) because the courts had the chutzpah to change the rules of the game? And what if I also told you that fair use is far more narrowly applied to music than to any other art form? Would you still want to take a gamble that your usage of somebody else’s stuff isn’t infringing? Getting it wrong could bring you a lot of tsoris. So tune in next week when I discuss how the application of the concept of “transformative use” sometimes seems like a “parody” of traditional fair use analysis.

This article, including the author’s replies to any comments, is intended to supply general information and guidance. It does not constitute legal advice and does not create an attorney-client relationship. Readers with specific questions should contact an attorney with relevant expertise for legal advice pertaining to their particular matter, as every situation is unique.