The crux of the matter in grasping Elliott Carter’s difficult and satisfying music lies not in conquering its inherent and unavoidable technical issues. What’s crucial is finding the broader context in which those challenges can be seen not as obstacles to successful performance, but rather as essential musical materials that upon close investigation reveal important information about the nature of Carter’s music itself, its structure, aesthetic, and intent. 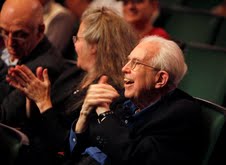 Elliott Carter applauds the performances of his music during his 103rd birthday concert at the 92nd Street Y in New York City on December 8, 2011. (Photo by Cory Weaver, courtesy 92nd Street Y)

From a singer’s perspective, Elliott Carter’s works are challenging. Yes, there is a whole bag of tricks a singer can employ in learning this music, from extensive use of Dr. Beat, to charting out pitch relationships, to practicing against pedal tones—all of which are important techniques to learn. And so I try to impart these tools of the trade to my students, hopefully to positive effect. However, it seems to me that the crux of the matter in grasping this difficult and satisfying music lies not in conquering its inherent and unavoidable technical issues. What’s crucial is finding the broader context in which those challenges can be seen not as obstacles to successful performance, but rather as essential musical materials that upon close investigation reveal important information about the nature of Carter’s music itself, its structure, aesthetic, and intent.

Even amongst skilled performers, a commonly heard knock against Carter’s vocal music (and that of other modernist composers) is that the writing for voice is unidiomatic. (Exactly what constitutes idiomatic vocal writing is a topic for a different article. Suffice it to say that to my way of thinking, Berio’s Sequenza III is more closely aligned with so-called “natural” vocal expression than is Mozart’s “Dove sono.” Perhaps Carter’s vocal lines have more in common with the latter.) But the very notion of idiomatic writing, for any instrument, is usually unconsciously tied to the familiar, historic repertoire for that instrument. Having embodied this repertoire, performers sometimes conflate threads of stylistic musical requirements with those of technical efficiency or “performability.” One conclusion frequently drawn from this conflation is a tenet that there exists an idiomatic paradigm for each instrument. Not surprisingly, these paradigms almost always fall within brackets of one or two narrow styles (that differ according to instrument). All of which prompts me to ask: are the virtuosic piano works of Liszt really “pianistic,” or has the repetition of these works, coupled with Liszt’s cemented place in history, colored our view? Does the bel canto approach to singing really result in the optimal vocal sound? Besides, isn’t bel canto a style? And what does that style have to do with the music of Elliott Carter?

Well, not much. And so in approaching new works (or old ones, for that matter), I find it absolutely necessary to forgo such habitual fixations in order to better examine the essence of musical style from the bottom up, for every composer, and in each discrete piece of music. Ultimately, every work deserves to be addressed on its own terms, and performance as a whole undoubtedly benefits from such a modus operandi.

For example, one broad exploration of stylistic essence encompasses how we performers are asked, by the music itself, to handle the passage of time. Musical time seems to manifest itself on a continuum between objective and subjective—that is, between clock-time and our internal experience of time. An extreme example of music that is constructed so as to depend on the performer’s adherence to objective time would be Conlon Nancarrow’s player piano rolls. At the opposite pole, music that structurally hangs on the performer’s mastery and manipulation of subjective time is the gesture-driven music of György Kurtág.

It could be said, for a variety of reasons, that Elliott Carter’s music is firmly planted on the objective side of the time continuum (more on this soon). Conversely, the canon of so-called idiomatically written vocal music (think Italian opera and late-romantic art song) leans decidedly to the subjective side of the time continuum—that is, it allows for and even depends on tools such as rubato and tenuto for its success in performance. And there’s the rub, when it comes to the singer’s approach! Let me illustrate a bit further.

Upon examination of Carter’s vocal music, certain elements stand out which reveal it to be rooted in objective time. Carter’s pervasive contrapuntal cycling of rhythmic material is emergent in the instrumental complement (be it chamber ensemble or piano). The vocal line participates in this rhythmic play to a lesser extent, but when it does, it almost always cycles at a more protracted rate than do the instruments. Acoustic balance is achieved by the clearing of small spaces, often less than a sixteenth-note’s duration, in which the singer must precisely place text. For this element alone, it follows that an accurate rhythmic performance insures better intelligibility of the sublime poems employed (including those of the great Americans Elizabeth Bishop, Hart Crane, John Hollander, Marianne Moore, and Ezra Pound). The use of rubato in Carter is, in most cases, intrusive to both the progress of the music and to tight ensemble.

In addition to these micro-rhythmic intricacies, there is another important characteristic that influences the perception of Carter-time on the macro-level. Rarely virtuosic, Carter’s vocal lines are often slowly unfolding arches that stand in contrast to the concurrently bubbling instrumental lines. Taken alone, the vocal line progresses in regular rhythms. Seldom is there a tuplet to be found. Many “football notes” appear; indeed, the text is sometimes sustained to the point of obscuring meaning (intelligibility of text is, in part, dependent on the listener’s ability to discern the rhythmic properties of language). Perhaps this high-flying, sustained approach to setting text can be viewed as Carter finding yet another way to manipulate the experience of time towards the objective pole.

So, here we have two factors in Carter—the limited practicality of rubato and the deliberate distortion of natural speech rhythm—that pose a conundrum to the well-trained singer, who has absorbed the message that idiomatic (i.e. “musical”) compositions allow for a flexibility in rhythm that will assist her in clearly delivering the text. It’s no wonder that in the face of this incongruity, she resists the apparently fatal barriers to expressiveness and instead bends the music to the familiar paradigm! The result of doing which, unfortunately, might be a performance that either is redolent of Brahms or that betrays the discomfort of waking up in a musical straitjacket.

Finally, then, how is the singer to tease “natural” expression out of music anathema to the bending of time?

One answer lies in unpacking the text to expose another facet of espressivo not always explicit in musical notation: timbre. Think of music as it exists on three axes, where x = time, y = pitch, and z = timbre. On the two-dimensional page of printed music, the inflective instructions of the z-axis appear rather sparse and general when compared to the specificity found in the representation of rhythmic and pitch structures. This is true of all notated music; Carter’s is no exception. However, the presence of a text provides the advantage of a limitless supply of timbral tools for all attending musicians to draw upon, in addition to any specified phenomenal accents and dynamic indications. The expectation is that all performers (singing and non-singing) extrapolate from the inherent sonic material of poetry generated by methods—onomatopoeia, alliteration, anaphora and rhyme among them—that variegate timbre and texture, thus animating the z-axis.

Perhaps the most coloristic components of language reside in consonants, which, in the pedagogy of singing, regrettably are regarded as the ugly stepsisters of vowels. Yet deft management of the shading, rhythmic placement, and duration of an initial consonant (so long as the ensuing vowel starts on time) can highlight a word more meaningfully than any fermata (always placed over a vowel!) could ever hope to do.

Clear diction without rhythmic aberration requires quite a bit of dynamic and coloristic flexibility, especially with regard to stressed and unstressed syllables in artificially sustained phrases. Further, encoded in the syntax of the poetic phrases is a dynamic shape that Carter has clearly absorbed and provided the framework for in both his selection of intervals and rhythmic relationships. This dynamic shape is far more detailed than could be represented by hairpins and accents. Take for instance the first stanza of Hollander’s poem “High on our Tower,” the text for the opening song in Carter’s cycle Of Challenge and of Love:

High on our tower
Where the winds were
Did my head turning
Turn yours,
Or were we burning
In the one wind?

In his setting, Carter indicates an accent (>) over 16 of the 25 syllables. Certainly that does not mean 16 equivalent attacks! 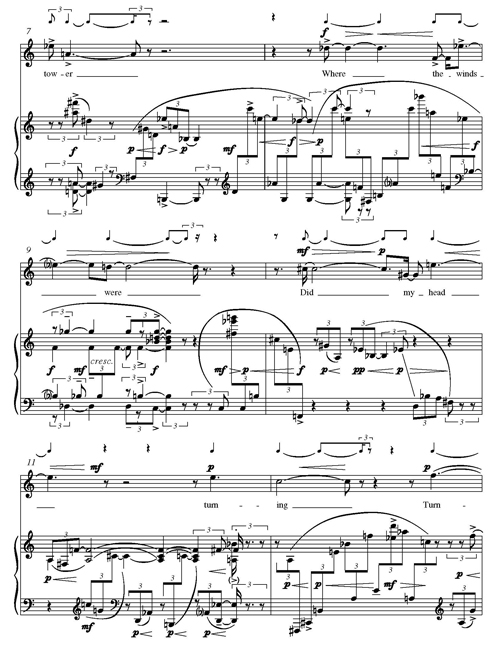 Of Challenge and of Love
Elliott Carter and John Hollander
(c) Copyright 1995 by Hendon Music, Inc., a Boosey & Hawkes company
International copyright secured. All rights reserved
Play sample audio: Elliott Carter: Of Challenge and of Love I. “High on Our Tower”
Sung by Tony Arnold, soprano, accompanied by pianist Jacob Greenberg from the CD The Music of Elliott Carter, Volume 5 (Bridge 9128). Courtesy Bridge Records. (Order from Amazon or download from iTunes.)

This is a clear example of the limits of notation when it comes to timbre. Even when those accents occur in relationship to a specified dynamic shape, it is the text that can singularly elucidate how to execute each discrete accent. Three instances:

1. Exaggerating the [hw] and [w]’s of the alliterative and onomatopoeic line “Where the winds were” immediately evokes wind. Whether it is to be a breeze or a gale is at the discretion of the singer, fully informed by the musical materials that encircle that image.

2. Carter highlights the anaphora of “turning, / Turn” by placing the second “Turn” one half-step above the first. The singer can further reinforce this by intensifying the articulation of [t], especially in the context of the soft dynamic specified in the score.

3. Carter discloses his personal take on how the poem should be read through the sudden rhythmic diminution of the final two lines of the stanza. This coupled with the insertion of both a rest and a large intervallic drop between “one” and “wind” results in a rush of urgent questioning: “or were we burning in the ONE… wind?” Again, the alliteration of two [w]’s appears, but this time requiring a decidedly different affect via both literal meaning and positioning as the final cadence of the stanza. The singer must adjust the energy and texture of those juicy consonants accordingly.

This is but a slice of the rich world revealed by digging deeper into the sonic properties of text. Any singer who continually broadens her timbral palette can free herself of what might otherwise feel like a wooden adherence to objective time. The tightly wound rhythmic structures found in the music of Elliott Carter deserve to be complemented with the utmost creative investment in the oft-neglected parameter of timbre. In doing so, the myriad expressivity embedded in his musical language is unearthed. As in the words of John Hollander, set by Carter in Of Challenge and of Love:

But when true beauty does finally come crashing at us through the stretched paper of the picturesque, we can wonder how we had for so long been able to remain distracted from its absence.