Diggin' in the Boneyard
NewMusicBox
Written By

Diggin’ in the Boneyard

How one discovers what material will work in a particular piece and the decision-making process by which the end result is created are two important aspects of the creative process that define and differentiate each composer from his or her colleagues. 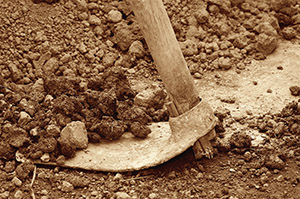 It’s funny how often discussions with non-composers will circle around towards the mysterious aspects of the creative process; most folk, including performers, tend to assume that composers are continually walking around with a cacophony of ideas playing in their heads and simply copy down the fully formed piece as if it was being broadcast from an internal radio station. Even if one comes across a composer who does have their internal Pandora station set to “continuous play” (and I have met a few), it would be a mistake to assume that their creative process is nothing more than self-transcription. How one discovers what material will work in a particular piece and the decision-making process by which the end result is created are two important aspects of the creative process that define and differentiate each composer from his or her colleagues.

I’m currently working on a short “closer” piece for wind band and recently found myself at one of those junctures where that decision-making process was frozen. I had a fairly good idea of the formal structure of the piece (so I thought I knew where I was going), and the piece had been chugging along nicely in many ways…until I hit one of “those” spots in the piece where nothing seemed right. Everything up until that point flowed easily from one section to another—I remarked to my friends on Facebook that I had performed the “happy dance” when a particular section worked really well—and then, nothing. Ideas were thrown against the wall to see what stuck to no avail.

Each composer has his or her own method by which they extricate themselves from such situations; depending on their timeframe they might put the piece away for a while and come back to it, for instance, but with my schedule I rarely have that luxury. So I decided to go, in my own words, “digging in the boneyard” to see if I could find any bits of material that could fit effectively (or at least jump-start the stalled creative process). Every composer’s “boneyard” is different, of course, but at least from my perspective it consists of works of mine that either didn’t work or, more likely, had served their purpose years ago but lacked the necessary ingredients to remain in my current catalog.

When I began my graduate studies in the late ’90s, I didn’t even realize that I had a “boneyard” to work with, but in the years before my move to academia I had written quite a few film scores. Those scores served as useful departure points for several early works of mine. For example, the inception of my band work Dreamcircus can be traced to a scoring assignment completed during my studies at USC. This allowed me to take familiar material and explore what it could offer to a much greater extent than in its original medium. As my list of concert works has increased, there are occasionally pieces that don’t seem to have a shelf life past their premiere, but often they will contain material within them that can be used to generate a new work—or, in my current project, an effective contrasting section.

While this concept is not by any means new—composers have been reusing and reworking material for centuries—I still find it fascinating when it works. As exciting as creating something new from whole cloth, so to speak, is, the process by which existing material can be repurposed in an artistic and meaningful way will always be an important part of my own creative methods.