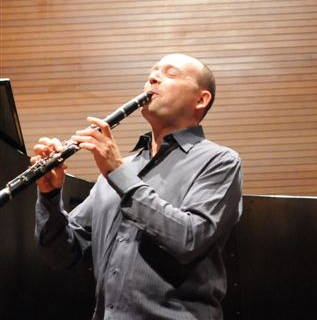 Composer and clarinetist Derek Bermel has been named the new artistic director of the American Composers Orchestra commencing with the 2013-14 season. Bermel has been ACO’s creative advisor since 2009, and succeeds composer Robert Beaser who has been ACO’s artistic director since 2000 and was ACO’s artistic advisor from 1993. Beaser will continue as ACO’s artistic advisor laureate. Bermel joins Music Director George Manahan, who has just renewed his contract with ACO for an unprecedented five years, in leading the ensemble in its mission to be a catalyst for the creation of new orchestral music.

Derek Bermel first came to ACO’s attention in 1994 as a participant in the Whitaker Emerging Composers Readings (now the Underwood New Music Readings) with his piece Dust Dances. ACO has since commissioned and premiered Bermel’s work on numerous occasions, including his first professional orchestral commission and Carnegie Hall debut in 1998 with Voices, a clarinet concerto. ACO also commissioned and premiered A Shout, A Whisper, and a Trace (2009); Elixir (2006); and The Migration Series with Wynton Marsalis and the Jazz at Lincoln Center Orchestra. Bermel was ACO’s Music Alive composer-in-residence from 2006-2009, joining ACO’s board and becoming the orchestra’s creative advisor in 2009. In his role as creative advisor, Bermel programmed the ACO’s Orchestra Underground series at Carnegie Hall and ACO’s citywide new music festival SONiC, Sounds of a New Century, in 2011, which featured 21st-century music by 120 emerging composers. Bermel has also been active in several of ACO’s composer development initiatives including serving as a mentor for the Underwood New Music Readings and EarShot programs, and serving as an artist-faculty member for the Jazz Composers Orchestra Institute. In addition to his new appointment with ACO, Bermel will continue to serve as director of Copland House’s Cultivate! Program for emerging composers.