Delay Is Denial
NewMusicBox
Written By

A well-rounded musician should be able to improvise as well as compose and/or perform music; it’s a matter of being able to speak as well as listen! Probably one of the hardest things to accept about improvisation is that learning how to improvise is done by improvising.

While it is a fact that most of the discussion on NewMusicBox is about composed music, the subject of improvised music isn’t new to its readers and one that shouldn’t be avoided or ignored. A well-rounded musician should be able to improvise as well as compose and/or perform music; it’s a matter of being able to speak as well as listen! So, in short order, I’d like to offer my observations on the subject by first coming to an understanding of what improvisation is and isn’t.

There is a philosophy of looking at the performance of ornamentation as a kind of improvisation. But I don’t believe that choosing between historical examples of mordents and appoggiaturi can really be called an act of improvisation. (But I do think that the practice of performing a passage as written once and repeating it with free ornamentation can meet the requirement for being, or at least including, improvisation.) So, while Yo-Yo Ma’s interpretations of J. S. Bach’s Suites for Solo Violoncello are noticeably different from those of Pablo Casals, neither can be called improvisations.

The New Harvard Dictionary of Music (Cambridge: Belknap Press, 1986) says that “[i]n Western art music, which is heavily dependent on notation for transmission, improvisation includes phenomena such as the addition of extemporized ornaments as well as special improvised genres.” So, to me, an ornament, to be improvised, cannot be taken from a list of historically accurate referents. (A truly improvised mordent would be one that is performed “incorrectly”; the closer one comes to playing them right, the farther away from improvisation it becomes.) I think that Harvard hits the nail on the head in the opening sentence of its definition of improvisation: “The creation of music in the course of performance.” This offers a difference between “performing” music and “creating” it as well as a context for improvising.

Probably one of the hardest things to accept about improvisation is that learning how to improvise is done by improvising. One doesn’t learn how to do it, only how to do it better. So the first step is simply to decide to start improvising. Singers can do it as soon as they wake up, instrumentalists have a little more preparation to do: pick up, or sit down at, their instrument. One just starts.

With this in mind, the next step is to decide what it is one will be improvising. This sounds almost antithetical to the idea of improvisation. Certainly, if improvisation is the extemporaneous creation of music in performance, how can one decide what one will create beforehand? But improvisation, for the most part, occurs inside a framework of genre, form, harmonic/melodic content, and context that make it vital to preconceive not necessarily what one will play, but necessarily what one will not play. To illustrate this, imagine a trumpet player who only plays jazz and doesn’t know what any of the elements of Indian music are (e.g. raga, tala, or shruti), yet is improvising in a group playing traditional Indian music, say Raag Bhairav. No matter how closely our trumpet player listens to the rest of the musicians for guidance during the performance, his or her improvisation will not be in sync with the intent of the music. (Unless, of course, the intent of the performance is to juxtapose the trumpeter’s lack of ability to perform the music that the rest of the group has mastered.) Conversely, a sitar player thoroughly versed in the Hindustani classical music tradition, but with no knowledge of the blues form will not be able to improvise a convincing solo on Charlie Parker’s “Au Privave.” These two examples illustrate, in the broadest terms, what one should not do in musical improvisation.
A large part of what to improvise on in the jazz genre is tunes from the Great American Songbook. So the most important—albeit tedious—thing to do is to listen to a lot of jazz artists perform specific tunes, as much and as often as possible, with the goal of being able to at least identify any of what was heard on subsequent listening, if not recreate it. One has to be prepared to agree that this is something that one would have to do for as long as one wants to improvise jazz. This never-ending step informs the rubric of what one will do in musical improvisation. It doesn’t matter what genre of music one applies this step to, and it doesn’t matter how many different genres of music it’s applied to; one can compartmentalize according to genre. What does matter, though, is that one does this step a lot.

Next comes an even more tedious, but rewarding, step: practice. One must practice improvisation. But practicing improvisation is not the same as improvising. One practices major and minor scales, but rarely does a performance consist of major and minor scales (and improvisation is done “in the course of performance”). So one practices repertoire, the tunes from the Great American Songbook one has been listening to others perform, while trying out ideas that come to mind. Maybe change some of the notes, or fill in the spaces between phrases. But, this must be practiced critically. If a phrase or fill is done incorrectly, stop and do it again correctly. And then do it again until it isn’t done incorrectly at least ten times in a row. While this can be frustrating at first, it gets better with practice. I think the hardest part of this is making the time to do it; but, once it’s done, it’s done. And it’s like riding a bike, you never really forget. You just get out of practice. So, practice! There are many ways to practice and one should use as many of them as possible: One can practice alone, to an imagined accompaniment. (Accompanists can practice to an imagined soloist. One can practice with a metronome, using its click as different beats. One can play or sing along with what one is practicing. One can practice with a recording or with ambient music, such as the radio or TV. Finally, one can practice with others. The last offers a great way to get critical feedback about one’s progress. 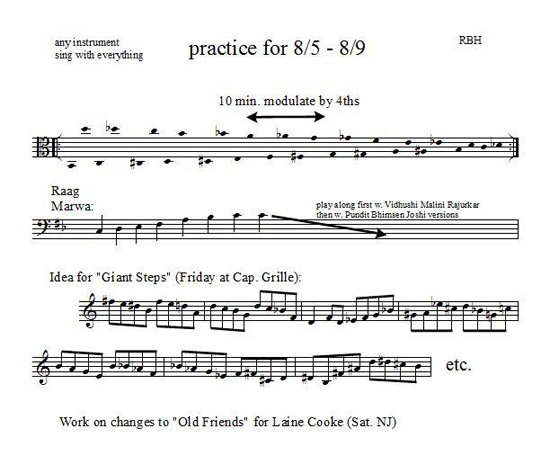 Then there is the taking of lessons. While listening to someone else’s performance is studying and can be a lesson in itself, setting up a session with someone where teacher-student role-playing is agreed upon can save a lot of time and offer valuable insight into what one is doing. The role-play can go on for as long as one wishes. There are several individuals who, even though I might have only taken one lesson from them, I will always consider as my teachers. But there are also some whom I don’t consider as such so much, even though I might have taken several lessons from them and the information they imparted to me was invaluable. Generally, though, I find myself revisiting the lessons I have taken in the past and still gain new insights from them. I still go to lectures and workshops whenever possible and still take a private lesson when the mood strikes. Of course, one can improvise a lesson when the situation is right, but I’d have to teach you how to do that!

Then comes the scary part: creating music in performance. Some teachers will want to control that. But my belief is that when it’s time to do it, do it. Otherwise, you could find yourself in the same situation as this:


The first time is nerve-wracking, but it gets better every time.