Daphne Oram has clearly become a beacon for contemporary composers from Missy Mazzoli to Rene Orth to Anne LeBaron. Yet the question, voiced by many a respected music colleague, keeps resounding: “Who?” Daphne’s invisibility is at the center of my new play Sound House, which runs from February 20 to March 4 at the Flea Theater in New York City.

I’ve been writing a play haunted by Daphne Oram. “Who?” many a composer or music professional has asked when I’ve confessed my current creative obsession.

British inventor and composer Daphne Oram, a pioneer of electronic music and co-founder of the BBC Radiophonic workshop, died impoverished and relatively unknown in 2003. Oram’s system of Oramics, an early form of sound synthesis developed in the late fifties, involved generating sound from drawn image. When, in 2010, a relic of the composer’s “Oramics machine,” a behemoth of a contraption designed to house multiple strands of film running through a series of scanners, was unearthed moldering in a barn in France, the composer’s legacy was exhumed. Oram experienced the beginnings of a revival of sorts, one that has been growing steadily ever since. In June 2016, Still Point, the piece Oram wrote for two orchestras and tape machine in 1948, when she was 23—thought to be the world’s first composition that manipulates electronic sounds in real time—premiered in London as part of the Southbank Centre’s Deep∞Minimalism festival to ecstatic notices 70 years after Oram composed the work. And yet, although Oram has clearly become a beacon for contemporary composers from Missy Mazzoli to Rene Orth to Anne LeBaron, the question, voiced by many a respected music colleague, keeps resounding: “Who?”

Oram has clearly become a beacon for contemporary composers from Missy Mazzoli to Rene Orth to Anne LeBaron.

Daphne’s invisibility is at the center of my new play Sound House, which runs from February 20 to March 4 at the Flea Theater in New York City, produced by New Georges as part of a repertory project entitled “Steeped in Sound.” Two research trips I made to the Daphne Oram archive at Goldsmith’s University in London fueled my work on the play, which has become not just an investigation into Oram’s sonic legacy but a meditation on the nature of trust (Daphne’s complicated relationship with her engineer) and doorbell ditching. (I found, in the archive, that Daphne was obsessed with a barrage of buzzes and bells she was convinced she had heard, and obsessively recorded all possible arrivals—no one was ever there.) Daphne’s alter ego in the play, Constance Sneed, who has come to the theater to tell us her own story involving a disappearing mother and Constance’s own struggle with invisibility, serves as the lens through which we view Daphne. Ultimately, Daphne’s and Constance’s stories bump up against each other, two parallel narratives converging at a distant vanishing point that envisions a world in which old ladies do not die alone or forgotten, trusted accomplices prove their mettle, and young women make themselves seen and heard. Oram’s pursuit of Francis Bacon’s vision of a utopian society clamorous with heretofore unknown sounds and music resonates at the core of the play, in which text, sound, and movement all function as primary modes of expression. Sound House is, I hope, a lot like Daphne’s music—visceral, strange, haunting, at times funny, a conjuring of psychic space through sound, a landscape one garners a sense of having journeyed through.

As a playwright who has, in recent years, become an opera librettist as well, writing this play and exploring it off the page, in three, perhaps even four dimensions, has been for me not just an inquiry into the various shadings and mind-bending qualities of invisibility, but an investigation into the architectonics of sound in the theatrical space; the collusion, or collision, of text and music; how it is that one composes a durational object.

Thanks to the generosity and the vision of New Georges, the company producing the play, my collaborators and I have been lucky enough to engage in a process that has involved four workshops over two years and a production rehearsal process with a sound designer frequently in the room. Sound House’s team of makers includes Debbie Saivetz (direction), Tyler Kieffer and Brandon Walcott (sound), Brendan Spieth (movement), Marsha Ginsberg (set), Kate McGee (lights), Olivera Gajic (costumes), and Christina Campanella (additional music), and actors Vicky Finney, Susanna Stahlmann, and Jim Himelsbach.

The composer’s almost hermetic relationship with the sounds she produced came from literally living with the music and her Oramics machine.

Just as Daphne’s story and her music have served as jumping-off points for my own idiosyncratic theatrical imagination, the sound designers of Sound House, Tyler Kieffer and Brandon Wolcott, have chosen to dream in to how Daphne’s music might sound to us if it were written now. The music in Sound House comes not just from Daphne, but from a wide array of sources, including composer Christina Campanella, my collaborator on Red Fly/Blue Bottle (2010), whose music for the play explores the tactility of Daphne’s sound world—the ways in which Oram coaxed sounds out of her machines—via a loping, slightly off-kilter composition created out of found sounds and Moog synthesizer. Campanella is compelled by the connection Daphne had with her music, the composer’s almost hermetic relationship with the sounds she produced, which came from literally living with the music and her Oramics machine in her studio, which was also her home, a former oast house in Kent entitled Tower Folly. Campanella’s music communicates Daphne’s sense of wonder as well as the ways in which Daphne’s sound inventions became, for Daphne, characters or companions. Campanella has also created a theme for Constance, which serves as a metaphor for the process my collaborators and I are undertaking as we venture into Daphne’s world, a journey of exploration and discovery that Constance concurrently undergoes as the play unfolds. 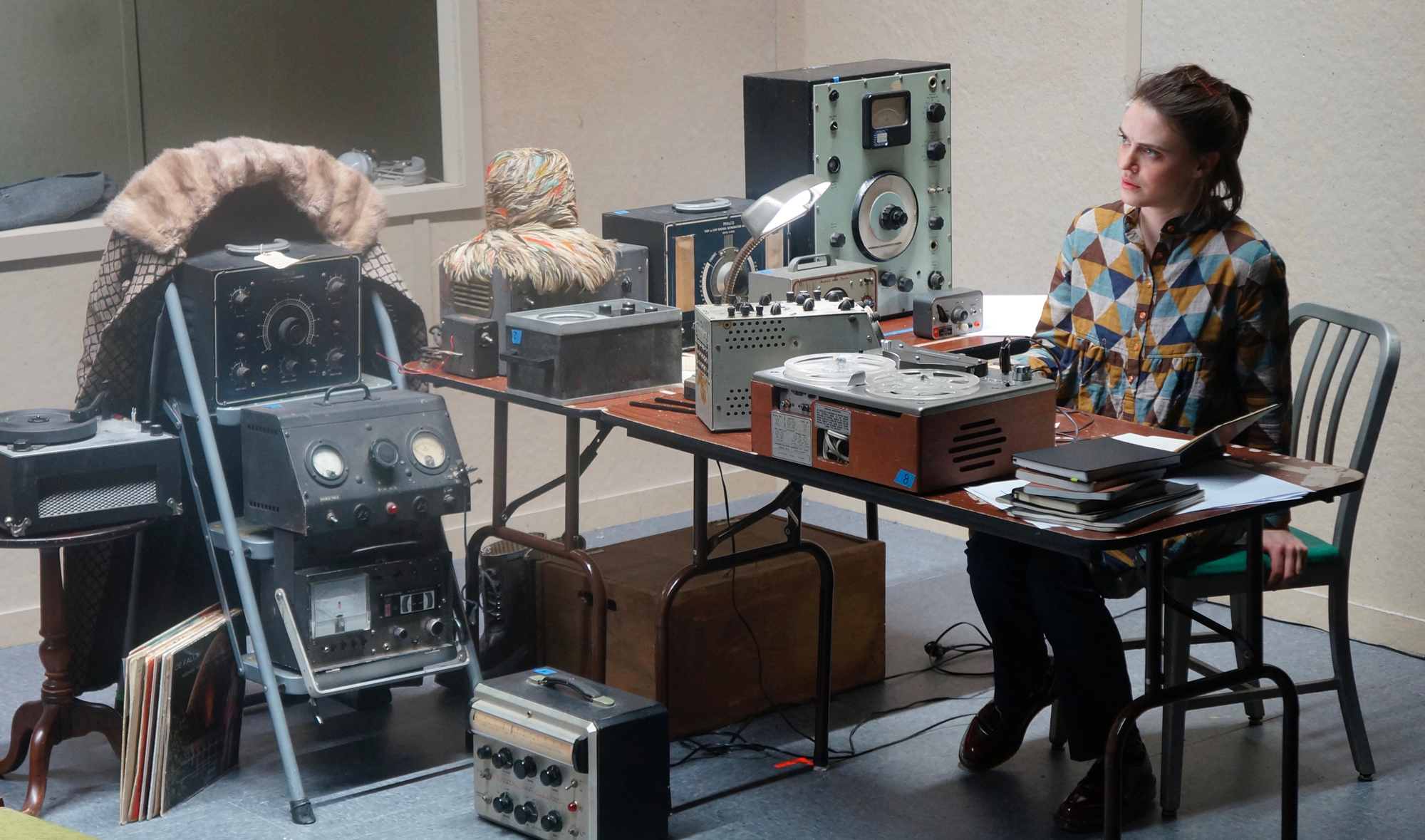 Incorporating Campanella’s work into the mix, the sound designers are, in this case, functioning as composers. But then again, in a way, so am I. So is everyone in the room. We are, in a sense, making a piece of music, a multidimensional sonic object in which movement and sound serve as text, text becomes music, and sound carves out not only space and time, but also story. The play is replete with refrains, for instance, the buzzes and bells Daphne keeps hearing, recurring images (sonic, textual, visual) that serve as motives. Its complex and elliptical dramaturgy defies narrative logic even as it is, at least on some level, rooted in character and story. There is clearly a need to tell, an urgency to the telling—but the shape of that articulation is elusive, an open field in which anything may be possible. And yet the work demands a remarkable rigor, a precision to the carving out of its moments in terms of the integration of text, sound, and movement that I have not previously experienced, whether working on a play, a performance, or an opera.

The sound designers are functioning as composers. But then again, in a way, so am I.

Inspired by Daphne Oram’s maverick vision, her life and her music, I find myself challenging what a play can be, the narrative structures it can hold. As opposed to hewing to a more conventional narrative arc, the play’s structural underpinnings arise from the cyclical and associative patterns of thought, in turn forging a shape whose logic (or illogic) has its roots in Oram’s music, which Horace Ohm, Daphne’s fictional engineer in Sound House, describes as “the underside of a half-remembered dream, like a distant thought, coated in rime, like memory itself.”

By the time she was in her sixties, Daphne found herself reduced to putting on outdoor concerts of recorded music to make ends meet. Calling on her early experiences as a junior engineer at the BBC, she installed sound systems in the forecourts, on the rolling lawns, in the apple orchards of the great houses of Kent, curating eclectic programs for a scattering of old-age pensioners, keeping meticulous notes as she wired up these sites: “20 paces from apple to yew to cherry.”  “Daphne Oram’s Recorded Music Society” is a centerpiece of the play, which attempts to get at what my rendition of Daphne describes as “the endless ostinato that is the opposite of renown.” Daphne’s struggle to disseminate her system of Oramics to a wider audience, and for recognition as both an inventor and a composer, dogged her until the end of her life. What is the moment, the turning point that determines that a person’s dreams are not going to come about? Sifting through the clues contained in the Daphne Oram archive, musing on the trajectory of my own life and those of many gifted artists I have known, no one answer emerges. The experience of invisibility is not a linear phenomenon. Neither are the ways in which invisibility undermines a life. Daphne’s eroded hopes are not unlike the infrasonics, the low unheard frequencies that pervade the play, wearing away at Daphne’s resilience in all sorts of insidious ways. Charting the depths of the condition of invisibility from the point of view of music and its modalities is making the space for discoveries I’m not sure would have come about via more linear means.

Foregrounding sound means that the text becomes something of a scaffold—not unlike an opera libretto.

Foregrounding sound as a primary compositional tool means that the text becomes something of a scaffold—not unlike an opera libretto. How is it that writing a play like Sound House informs my work as a librettist? How does my work as a librettist inform my approach to a play such as Sound House? In many ways, the two forms and the processes fueling them are somewhat antithetical. Creating an opera libretto requires an intense amount of premeditation—outlining, problem-solving, planning, all of which transpires prior to the actual writing process. Paradoxically, I have never outlined any play I’ve ever written. Sound House is, in part, structured around the conceit of a trio of first-person testimonials. It contains many more words than any libretto I would venture to write. And yet, working in opera for the past six years has sharpened my ear, deepened my understanding of musical dramaturgy, which has clearly informed how I am making my way through this play.

Daphne Oram was obsessed with Francis Bacon’s Nova Atlantis (1624). She kept a  passage from it—“We have also Sound Houses, where we practice and demonstrate all sounds and their generation”—pinned to her studio wall as inspiration. My contribution to an opera, the libretto—a fashioning of text as a scaffold for music, for drama, for lived time, for inhabited space, for story—must be all about a crystalline, almost cut-throat dramaturgy. But taking this leap into the more nonlinear terrain of Daphne Oram’s and Francis Bacon’s “Sound Houses,” however, has yielded invaluable insight into the machinations, if one dares use such a word, of music making, which can’t help but inform how I approach my next opera libretto. Working on Sound House has opened up new possibilities, leaving me to ponder what a libretto that does more than simply leave space for the music might look like; and ask not just how might I best serve the composer, but how can I build structures with my texts that truly house sound? 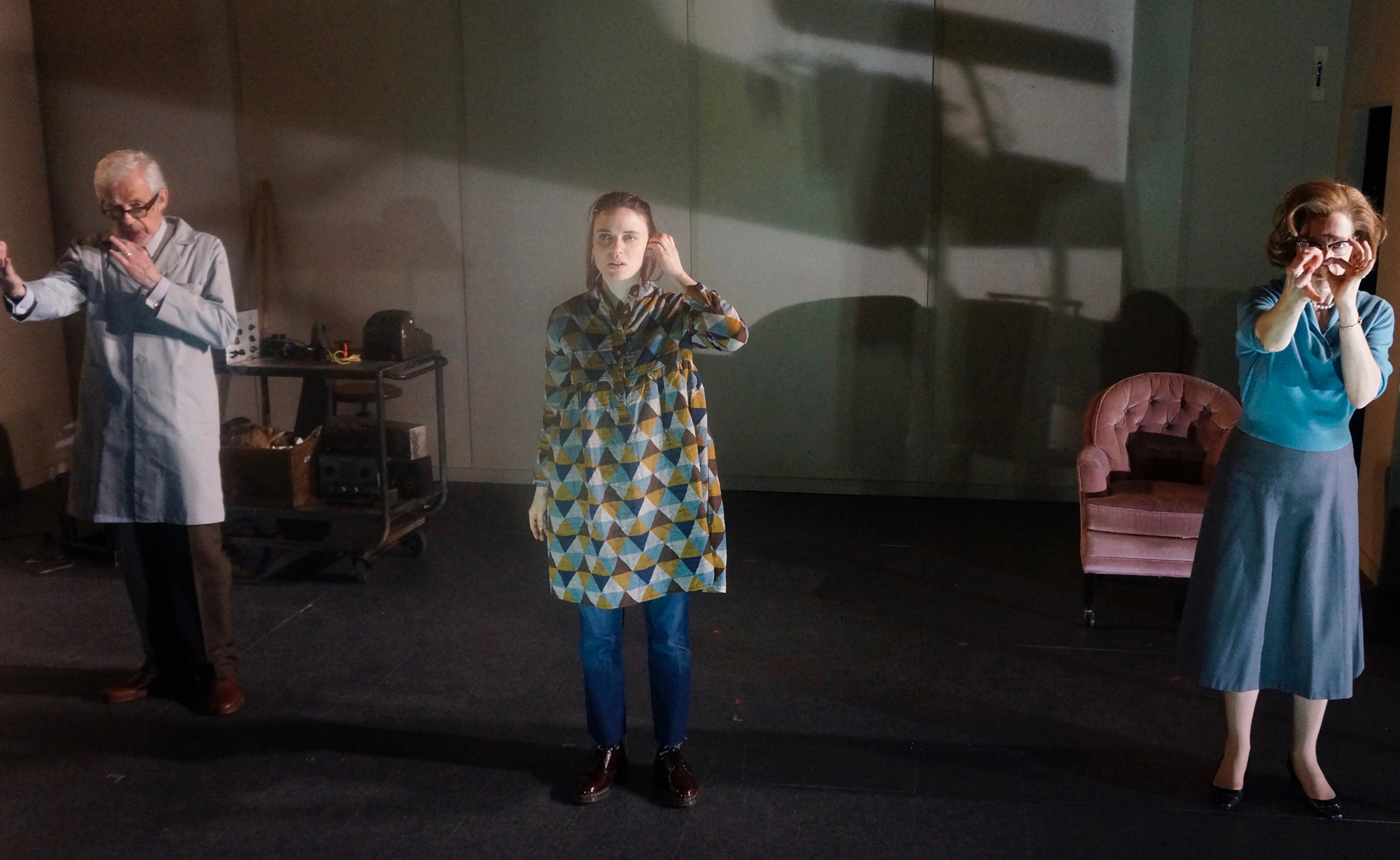