Cynthia Lee Wong has been selected as the second composer to participate in New Voices, an annual collaborative project between Boosey & Hawkes, the New World Symphony, and the San Francisco Symphony which aims to develop the professional careers of emerging composers in the Americas. 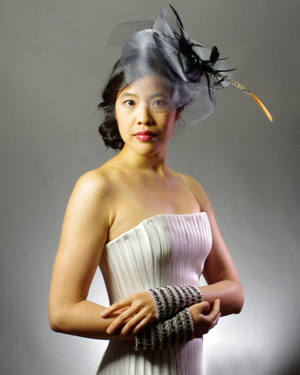 Cynthia Lee Wong has been selected as the second composer to participate in New Voices, an annual collaborative project between Boosey & Hawkes, the New World Symphony, and the San Francisco Symphony which aims to develop the professional careers of emerging composers in the Americas. Each year, one composer is chosen from a selection of invited applicants to participate in a multi-organizational residency that covers areas in career development including, but not limited to, working with a publisher, work-shopping new compositions, and premiering their works on both coasts with the New World Symphony and San Francisco Symphony in orchestral and chamber settings. After receiving hands-on experience in the preparation of score materials and contract negotiation at the New York offices of Boosey & Hawkes, Wong will collaborate with the New World Symphony in the work-shopping, rehearsal, and performance of two new works in the 2013–14 season—commissions that make up the performance-related aspect of New Voices. These New Voices commissions consist of one work for chamber ensemble and one work for orchestra, to be premiered by the New World Symphony in November 2013 and April 2014, respectively. The works will then receive their West Coast premieres by the San Francisco Symphony during the 2014–15 season.

Wong (b. 1982) was selected by a panel of judges consisting of conductor Michael Tilson Thomas and composers John Adams, Steven Mackey, and Mason Bates. A recipient of accolades including three ASCAP Foundation Morton Gould Young Composer Awards and several prizes from The Juilliard School, City University of New York, and Columbia University, Wong has studied composition with Samuel Adler, Milton Babbitt, David Del Tredici, David Olan, and Larry Thomas Bell, and is currently on the faculty at CUNY’s Baruch College. Current commissions include compositions for the League of Composers/International Society of Contemporary Music and the New York State Music Teacher’s Association. She is also collaborating with librettist Richard Aellen on two musicals: Nemo, an adaptation based on Jules Verne’s Twenty Thousand Leagues Under the Sea, and No Guarantees, a romantic comedy set in the future where a secret attempt to use an android as an understudy has unexpected consequences.

Canadian-born Zosha Di Castri was the first composer chosen to participate in New Voices. Her new work for percussion quartet, Manif, premiered at the New World Symphony in March, and her new work for orchestra, Lineage, premiered at NWS in April. Michael Tilson Thomas and the San Francisco Symphony will give the West Coast premieres of both works next season.

Upon learning about her selection, Frank J. Oteri met up with Cynthia Lee Wong and spoke to her about her music and what her expectations are about participating in the New Voices project.

(In additional excerpts from this conversation, Wong spoke about her formative musical influences–which includes a description of her teacher Milton Babbitt’s reaction to her music being described in the press as “shamelessly beautiful”–and her other artistic pursuit, drawing cartoons. Special thanks to Patrick Gullo for help in filming and editing the video.)