Curation is Not a Form of Marketing

Nobody has a fulfilling experience if the music is asking for something the venue cannot provide, nor if a venue is calling out for new types of performance while we insist on the conventions of the concert hall.

Since my first post in this series last week, I’ve been happily engaged in a number of discussions about the topic of curation and its role and/or use in new music. Opinions have ranged from people pouring out stories of their pursuit of these same ideals, to those voicing profound disagreement with the idea of any curation at all. What has most struck me about these many discussions is that the responses generally started from the unstated premise that the composer is the “artist” in this question of curation.[1] Even players, such as bass clarinetist Heather Roche, took this vantage point:

It’s wonderful when players’ dreams include commissioning and collaborating with composers. It is equally vitally important to our art form, though, that any discussion about curation articulates the fact that performers are more than blank walls upon which masterworks are hung. Many of the most innovative minds in our field belong to performers, and the vibrancy of our art form consistently relies on their passion and precision. So when I say that I want new music curators concerned with “making the dreams of artists come true,” I mean something both wider and deeper than better programmed concerts with more opportunities for today’s composers. 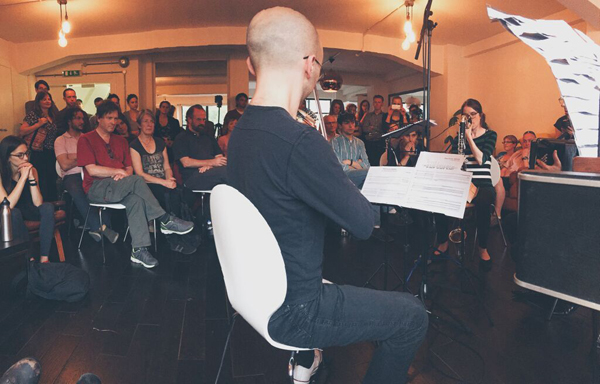 What’s going on here? (All photos by Aaron Holloway-Nahum.)

In the same way that a museum’s curator can help a museum to reimagine its role and resources, we need people who find purpose in helping performers do the same. It’s no surprise that the International Contemporary Ensemble came up many times in my curatorial discussions this week, but more often than not this represented the limited viewpoint of the players being involved in choosing the music they play and running the ensemble itself. This is not the true curatorial accomplishment of ICE, and it is not where the most exciting opportunities for further innovation lay. ICE’s insight was that a flexible community of musicians could provide new, surprising, and exciting responses to the increasingly diverse questions about performance in our time. Their success should suggest to us that there exists an array of rewarding innovations to the concept of an ensemble, and indeed to performance itself. Curatorial thinking is vital to ongoing innovation in areas like this, and we are particularly in need of curators who encourage redefinitions of historically fixed ensembles such as the string quartet and orchestra.

A number of people, however, responded to my first post by pointing out that I had avoided the question of quality when it comes to asking these questions.

Or, as a senior colleague commented:

Those who chose concert programmes and curate festivals etc. are often strikingly proud of their musical ignorance and lack of professional training in any musical field. Their choices are usually determined by such unartistic criteria as the amount of publicity this or that artist has already gotten and is therefore likely to get them. Or else a certain musical project will be chosen because it looks more publicity-friendly as it handles supposedly controversial subject matter…New music has remained refreshing, even internationally, precisely because it has not been dominated by the unmusical criteria of such so-called ‘middle men’…

Quality is a problem we all face, and new music is not served by a culture which consistently mislabels other practices as “curation” and then abandons the deeper and wider questions of curatorial practice to middle men and marketing departments.

One area where a higher quality of curatorial thought is required for new music is the growing practice of presenting new music in unusual venues. With the current rush toward “accessibility,” the fallacy here occurs when music intended for—and best served by—the focused attention of the concert hall, is parachuted verbatim into a venue with an entirely different culture and acoustic.

While more people might see it, Pablo Picasso’s Guernica would not have the same force as a piece of street graffiti as it does when presented in a gallery. Artworks are not disconnected from the space and context they are presented in, and nobody has a fulfilling experience (and nobody is converted to loving our music) if the music needs something (silence, a certain acoustic setup, the ability to focus) that the venue cannot provide. Similarly, we fail at any true development of our culture or outreach if a venue is calling out for new types of performance—and new possibilities for music itself—while we insist on the conventions of the concert hall.

It is also a missed opportunity. Take, as one alternative example, the London Contemporary Orchestra’s Imagined Occasions series from 2013. In the second of these concerts, the audience gathered at London’s Primrose Hill at sunset to hear Claude Vivier’s Zipangu. Following this, the audience walked from Primrose Hill to the Roundhouse while listening to Edmund Finnis’s Colour Field Painting, an electroacoustic “walking piece” that was especially commissioned for the event. Then, in the (somewhat) more conventional concert space of The Roundhouse, the audience sat and listened to four movements from Stockhausen’s KLANG – Die 24 Stunden des Tages as Conrad Shawcross’s Timepiece wove patterns of light above players dressed all in white.

There are other exciting and successful examples of this, but our current practice is still dominated by thoughtless parachutism[3]. Reimagining the concert experience in ways that fuse technology, movement, and space requires insightful curatorial thought, which is not a question of accessibility or marketing.

Our use of technology is another area where new music particularly needs our curatorial thought to grow to maturity. In my nightmares, we are headed toward a place where the greatest utilization of virtual reality in music will be the opportunity to attend Berlin Philharmonic performances of Beethoven in our living rooms. This is overstated (and life could be worse), but looking at the vast array of online and digital art being created, one can only lament the dearth of vibrant innovation we have had in this space so far.

Again, there are bright spots. This very week the London Sinfonietta and Kingston University launched an online platform called “co-curate” with the aim of inviting audiences to inspire and make contemporary art. Their first project will see members of the public respond to the brief “beauty in imperfection” prompt by uploading their own sounds, words, and still and moving images, which will then be gathered by composer Samantha Fernando into a multimedia performance in the Asylum Chapel.

There are some possible misnomers in how this website is titled. Uploading files is not “co-curating” a piece, it is contributing to a composition (if your files are selected). The artist doing the selecting (in this case Samantha herself) is not “co-curating” this piece, she is composing it.[2]

It is important to maintain that these are not the acts of curation, here, because what this platform is doing is using technology to reimagine what it might mean to be an audience, and what the relationship between an audience and composer can be. That is an interesting piece of curatorial practice and thought. We need curators to ask these questions in profound ways, so that profound answers can be brought to bear on our practice as performers and ensembles. The questions: “What work do you want to make that you can’t under current conditions?” and “What is it we need to change or accomplish so that these things can be attempted?” are not marketing decisions disguised as programming: they get at the heart of what it means to be an artist of our time.

*
1. In these next two essays there’s a lot of discussion about people playing different roles in new music. For the purpose of clarity, here I refer to composers as those writing instructions for performance (in any form/variety), and performers as those who execute those instructions. Composers and performers are grouped together under the term “musicians”, while the audience, is anyone who is observing these performances, both digitally and in-the-flesh. An individual can play more than one of these roles, but for the purpose of clarity I am treating the roles themselves as distinct.

2. Sifting through an array of possible inspirations while selecting some and discarding others, is an activity familiar to most composers.

3. The aforementioned practice of parachuting down to a (supposedly) unlikely or ‘new’ venue and playing repertoire there regardless of its best context.