Today’s world of music, while filled with heartfelt respect and affection, is also filled with contradictions and subterfuge that can lead many to psychic states ranging from hilarious disbelief to despondent bitterness. 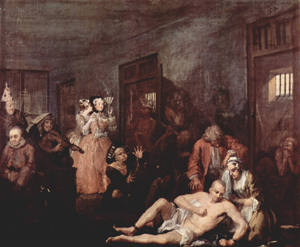 The Rake’s Progress: In the Madhouse (1735) by William Hogarth

I’ve often lamented becoming a professional musician, but not because of the poor pay or the way that one is perceived by those who “don’t get it,” but rather because I seldom get to go hear music or attend events that I’d like to because of work. Of course, a higher tax bracket might be nice. (It might even help me pay off the student loans.) But that’s not why I got into music in the first place, and it’s certainly not going to be the reason I quit, if I quit, which I have no plans to do at this time, anyway. Besides, music is something that humans do independently of the money stream. In fact, it’s something we’ve done long before money was part of our consciousness. But, please, until we have a different way of negotiating our ever globalized culture, don’t take this to mean that I’m offering to work for free; let it not be said that Ratzo B. Harris can’t be bought! At least for the time being. But I also say this because today’s world of music, while filled with heartfelt respect and affection, is also filled with contradictions and subterfuge that can lead many to psychic states ranging from hilarious disbelief to despondent bitterness. I myself have personally heard stories and seen examples of aspiring music students who were told by their composition teachers that certain techniques or combinations of instruments in the student’s homework cannot work, only to find the discarded lessons’ failings featured large in their professors’ next masterpieces. And it was Igor Stravinsky who was supposed to have said, “Good composers borrow, great composers steal,” an adage he apparently borrowed as a misquoting of T. S. Eliot. (Maybe he was mitigating his signature “Petrushka chord.”)
This sour-ish sounding theme was inspired by several things that have transpired in the last week, not the least of which were the controversial resignations of two prestigious members of the Minnesota Orchestra and the impending bankruptcy of the New York City Opera. While music will go on somewhere and somehow, the loss of the latter will probably go unnoticed among the majority of New York City residents, much as the falling from grace and potential demise of the former will not be considered important by most the minions of Minneapolis. On the national scene, the issue is hardly an issue at all. To most Americans, New York music is about Broadway shows and male vocalists in front of big bands, while Minneapolis is about an artist known as Prince. Never mind that the labor dispute of the Minneapolis Orchestra is a microcosmic mirror of the nation’s economic woes, or that the New York City Opera illustrates how musicians’ giving of their talents so that all can hear great music will not go unpunished. Our culture is far too saturated with music. Americans don’t need to think too hard—or too long—about what they hear to be able to hum an almost reasonable facsimile of it while going about their daily activities. It’s a case of not enough people knowing why (or even how) to give a damn to make a difference in the outcomes of these two institutions. Now if Sir Paul initiated a Kickstarter campaign to fund his next orchestral work, that would be a worthy cause!

It’s no wonder that—after years of practice, study, networking, brainstorming, and mostly thankless hard work—many musicians toss in the towel and take up “real” careers, such as selling real estate or teaching. But, as William Shakespeare once pointed out, a “musician’s melancholy is fantastical,” and many musicians, whether or not they give up the ghost, become depressed about the state of the art. After all, it’s a very competitive business that often demands that a process of mental and emotional compartmentalization take place to cope with the stress of getting, and keeping, work. This was driven home to me when I found out that a younger musician I know has been hospitalized for mental trauma associated with trying to negotiate the music scene. While I’m not privy to all of the details, I am reminded of great musicians of the past who befell similar situations: Robert Schumann, Hugo Wolf, Charlie Parker, Bud Powell, Thelonious Monk, and Charles Mingus were all institutionalized for being “touched by the gods.” The fact is that most musicians are intelligent and sensitive individuals who can easily be shaken to the core, especially when the “real world” delivers one of its brutal and devastating blows. The case of Butch Warren, whose career is marked with bouts of depression is an example. Another important figure is bassist James Jamerson, the only musician on Motown Record’s roster kept on a retainer. He felt that his true talent was as an acoustic bassist, but because almost all of his recording work was done on the electric bass guitar, he felt artistically stifled and eventually drank himself to death. I know, though, that one can break through the feelings of despair and hopelessness and will work and pray for my colleague’s imminent recovery.

One of the most iconic sagas of a musician caught between the rock-and-hard-place of art and life is that of Billie Holiday. (Whatever you do, don’t believe the story presented in the movie Lady Sings the Blues. In a class about her that was taught by Dr. Lewis Porter, it was proven that the only two things accurately represented in it were: 1) there was a person who called herself Billie Holiday and 2) she could sing. Instead read the book Billie Holiday: Wishing On the Moon, by Donald Clarke. Even though his writing is more than a bit judgmental, he sticks a little closer to the truth than the movie or Holiday’s autobiography, from which the aforementioned movie took its name.) She was invoked in a comment from last week as the first African American vocalist to be featured in a band led by a white musician, Artie Shaw. I would qualify the statement by pointing out the fact that it was a big band that Shaw led. Holiday had already recorded with Benny Goodman in smaller ensembles as early as 1933. (Holiday joined Shaw’s organization in 1938, after an unsatisfying stint with Count Basie’s orchestra. Her associations with Goodman and Basie were brokered by John Hammond, who was Holiday’s manager at the time.) Her life and career traveled a tightrope of drug and alcohol addiction due to fake id use, coupled with abusive relationships that devastated her body and voice. Still, she was an outspoken critic of racism both on and off the bandstand.

The commenter also brought his own college-days experience of studying with one of Artie Shaw’s alto saxophonists, Hank Freeman. Freeman also played in bands led by Glenn Miller and Bunny Berigan and recorded extensively. The irony of that commenter’s being “ignorantly unimpressed” with Freeman’s credentials was what struck me the most. I, too, have been guilty of being ignorant of the stature of many of the musicians I’ve worked with and for. Being primarily a free-lance musician, I tend to walk into situations cold and learn about the people I’m hired to work with as the job goes along. The idea of the importance to American music of a large group of relatively unknown sidemen as being at least as equal to the “name” they’re supporting is one that should be looked at more closely. In the next several upcoming posts I plan to compare and contrast several.