Creating Music with the Polychromatic System

I needed to find an intuitive and efficient way to work with 106 notes per octave. The immensity of new musical possibilities can seem overwhelming.

The creation and development of the polychromatic system came as part of a process of practicing and exploring musical possibilities with the Tonal Plexus keyboard. The Tonal Plexus is a microtonal keyboard controller with 211 programmable key-switches (buttons) per octave, designed and manufactured by Aaron Hunt of Hpi Instruments.

I needed to find an intuitive and efficient way to work with 106 notes per octave.

After creating different ergonomic note layouts for the buttons and programming the pitch values for each note assignment, I needed to find an intuitive and efficient way to work with 106 notes per octave. Rather than create another chromatic notation with an overwhelming number of pitch modifier symbols, I expanded chromatic notation into the micro-pitch color dimension and generalized the idea of pitch-color so that it could be used with any pitch division method. As a result, I can use the same polychromatic framework for my practice with 106 and 72 equal divisions of the octave—the values, in Hertz, of each pitch-color vary with each pitch derivation method, while the foundational system remains the same. 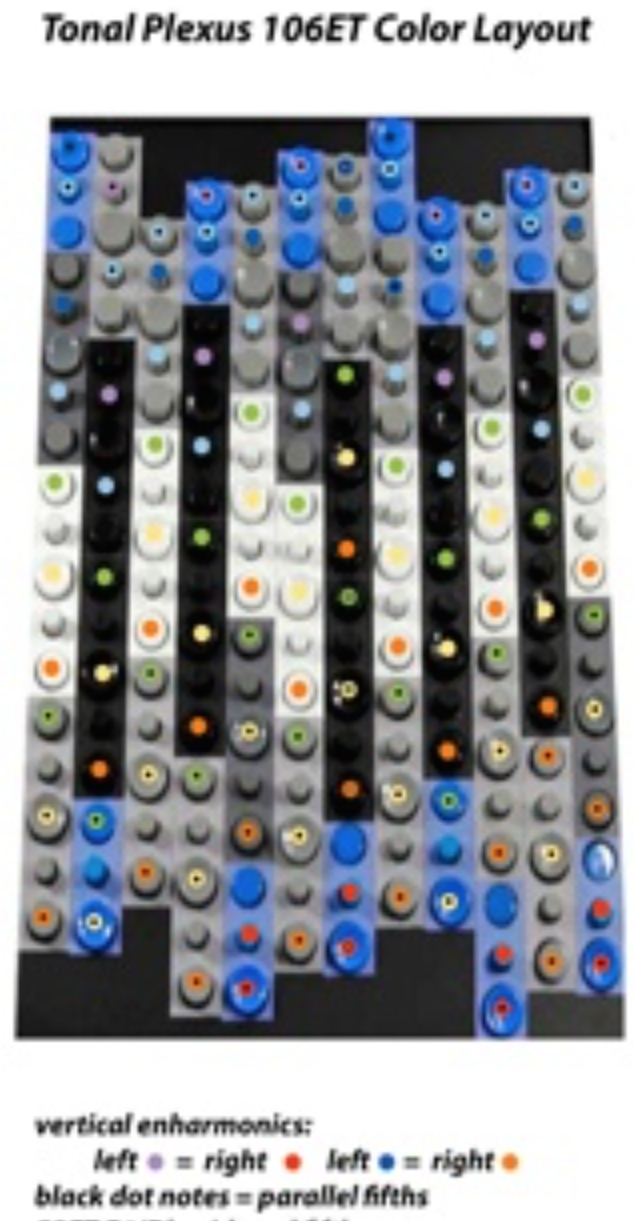 The layout of octave (with 106 steps differentiated by color) on the Tonal Plexus.

The next task was to explore different note layout configurations to simplify the technique required to gain a musical proficiency in playing hundreds of key-switch buttons. An option I decided on, was thinking of the keyboard as several horizontal multi-note regions. So, a region (module) of five key switches could be thought of as a kind of ‘string’ on a violin, with each pitch of the module transposed up a fifth from its vertically adjacent module. This is more clearly described in the video below:

This layout pattern greatly expanded the possible fingerings for scales and chords and made more intervals accessible within the reach of a hand span. The Tonal Plexus layouts I use have an advantage of redundant chord/scale fingerings (like the multiple position patterns of each scale on the guitar). These options allow for increased technical flexibility.

The Microzone u648 is built by Starr Labs and has 72 hexagonal key-switches per octave, It is a highly programmable microtonal keyboard which supports overlapping and uniquely shaped ‘zones’ of note layout. However, the type of redundant polychromatic note layout structures that are possible on the Tonal Plexus can’t be implemented on the Microzone u648 without severely limiting its pitch-resolution (i.e. 36 edo with two sets of 3 note ‘modules’, programmed a fifth apart). Instead, I program the Microzone with a simple note layout of stacked chromatic scales. This layout is far easier for conceptualizing the polychromatic system and transferring standard keyboard technique. But it is much more restricted in terms of playing technique, flexibility, and scale/chord possibilities within the hand span.

Keyboard layout on a Microzone u648

Once a note layout is created for the keyboard, I have to create a pitch layout for each note. To create the micro-pitch tuning layouts for these keyboards, I use the Custom Scale Editor (CSE) software developed by Aaron Hunt. The CSE provides an intuitive user interface with many diverse modes of micro-pitch programming functionality (i.e. ratios, Hertz, cents, user definable algorithms, functions, and constants). I have been using fractions in my tuning layouts—so, 72 edo would be programmed as a sequence from 1/72…72/72.

So far, I have been primarily focused on the exploration and composing process and have not had the time to delve into the expansive areas of sound design and MIDI editing. Currently, my primary sound sources include Omnisphere (with 8 channels of channel-independent pitch bend per instance/track) and Kontakt (with 16 channels of channel-independent pitch bend, per instance/track, in omni mode). I edit the sounds I use to have rich harmonic content without sounding brittle or harsh, and to be relatively free of modulation and detuning effects. I do like the sound of a very slow LFO (low frequency oscillator) because, at times, it seems to intensify the qualities of micro-harmonic interactions and structural movement.

The immensity of new musical possibilities can seem overwhelming.

The immensity of new musical possibilities within the polychromatic system can seem overwhelming. My approach to working within this new paradigm is to continue mastering chromatic rudiments (intervals, scales, chord voicings), and then use this as a basis to begin exploring the vast pitch-color modifications possible within the polychromatic system. I also make sure to practice in all 72 keys so I can continue developing better pitch discrimination, technical fluency, and a sense of the unique qualities of each key.

In this early exploration stage, I orient my polychromatic compositions toward bringing out the sonic qualities of micro-pitch combinations and harmonic/overtone interactions within a musical context of integrated harmony/polyphony and contrast. This is achieved by focusing initially on complex harmony/harmonic qualities over rhythmic, melodic, and sound design/timbral complexity.

As I am working on a composition, I use pencil and paper to transcribe my musical ideas and develop the piece. This handwritten sketch is what I memorize for audio and video recording of the composition. After the performance is recorded, I use Finale notation software to transcribe it into a monochromatic score. Finale only supports the assignment of a single color per pitch, per score. Because of this, I need to export the score as individual image files into Illustrator, a vector graphics editor, to create the polychromatic pitch and symbol coloration of the composition. Finally, these colorized image files are exported into PDF (portable document format) for publishing the polychromatic score on the internet.

Trying to explain what specific new emotions polychromatic music expresses is like trying to describe the color indigo to a person who has never seen it.

I have been asked what specific new emotions or auditory experiences polychromatic music expresses. Seeking an answer to this seems similar to the inevitable difficulty of describing, in words, a process that must be experienced perceptually. It’s like trying to describe the color indigo to a person who has never seen it: maybe as a color ‘in between’ blue and violet. But this, in turn, presumes a prior perceptual experience of blue and violet as well as an understanding of a conceptual color-space which frames the idea of ‘in between’.

So I try to express the new perceptual experiences of polychromatic music by using elements of monochromatic tonality as a foundation to diverge from and contrast with. My composition process is intuitive and guided by exploring new audible qualities and dynamic structures. The ear guides the process, with the secondary assistance of conceptual musical forms and theory. In this sense, monochromatic training, practice and theory are an important foundation and can be effectively used as a starting point – a musical basis to expand from. This is part of the process of expressing new experiences by comparison and through contrast. An established context (tradition) of understanding seems essential as a ‘bridge’ toward expanding musical awareness, perceptual experiences, and paradigms of understanding. And in a larger sense, the awareness, insights, and understanding gained through artistic exploration and expression of micro-pitch music and sound design may also assist in the development of new awareness and insights in the sciences.

In the next and final article in this series, we will explore potential implications of the polychromatic system – for future developments in music, technology and science.