Willie Nelson and Lyle Lovett have been honored as the Official Texas State Musician of the Year in the past, but last year’s honoree was Conspirare founder and artistic director Craig Hella Johnson. There’s a very good reason for that. 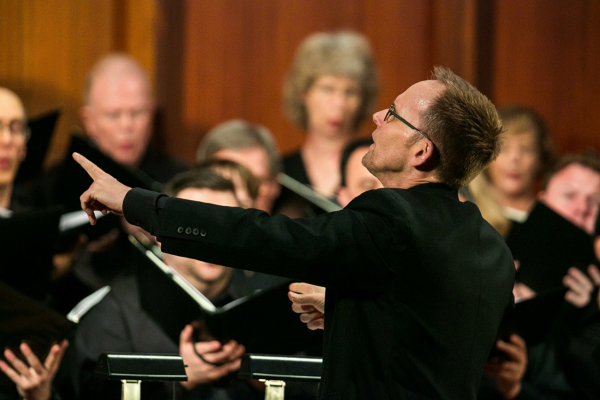 What are the first few names that come to mind when you think of Texas music? It’s not a stretch to imagine that Willie Nelson, Lyle Lovett, or Billy Gibson (of ZZ Top) might pop up, and it should come as no surprise that these are just a few of the people who have been honored as the Official Texas State Musician of the Year in the eleven years that the award has been around. However, it’s not only grizzled road warriors and guitar-slingers getting recognition in the Lone Star state. Selected for a one-year appointment by the Texas Poet Laureate, the current State Musician, and the State Artist Committee, last year’s honoree was Conspirare founder and artistic director Craig Hella Johnson. His career in Texas spans over twenty years, including a decade at UT Austin, and in that time he has taken a one-off project for the Victoria Bach Festival and turned it into a powerhouse of contemporary vocal music. That these accomplishments track in the world of concert music is no surprise, but the fact that they’ve garnered recognition as representative of the state at large is exciting.

Often referred to as “Conspirare’s Craig Hella Johnson” the truth is actually the other way around. Conspirare in many ways is Craig Hella Johnson, and when you see them perform you are seeing his vision come to life. To bring the members of an ensemble (let alone the audience) along on a journey takes the ability to show confidence and sincerity and to instill trust and wonder. I saw him speak about his life in music before a group of composers last summer and about twenty minutes into a two hour chat half of the people in the room were weeping. Several people had to leave the room to collect themselves. These were mostly simple stories about important mentors and moments in his development, but he had a way of talking about them that brought everyone in the room into his world by relating to similar stories from theirs. It was neither a motivational speech nor one that seemed to be engineered to endear; the guy just connects, and it comes through whether he’s on the stage or kicked back in a comfortable chair. 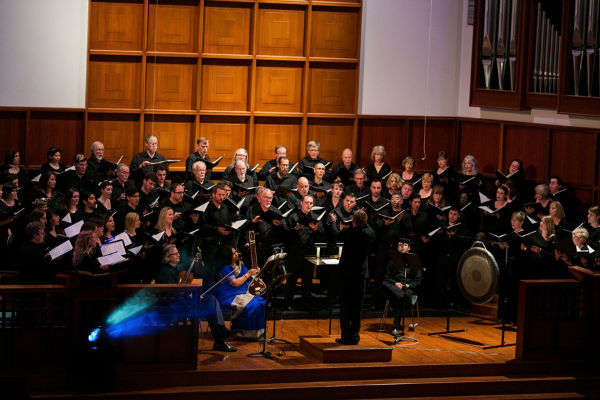 “Moving Light,” Conspirare’s most recent concert offering, was held on campus at the massive University Presbyterian Church on March 28, and consisted of two light-themed pieces: Morten Lauridsen’s Lux Aeterna and Luminosity by James Whitbourne. The former has become a bit of a warhorse in its short life and generally finds itself paired with heavy hitters of the canon such as the Brahms or the Faure, while the latter is even newer and shows it with solo parts for tanpura, viola, and tam-tam. I’ve seen Conspirare’s professional chamber choir, Company of Voices, on more than a few occasions, but this was my first experience with the full symphonic choir. Playing to an absolutely packed house, the 80-member choir filled the stage to begin the concert with the Lauridsen. Cast in five movements and clocking in at just under 30 minutes, the work draws its text from ancient liturgies including the Requiem Mass and its musical inspiration from the late Renaissance. The movements are played without pause, and Austin Haller’s organ accompaniment more often traded moments with the chorus as opposed to playing with it.

It’s no wonder the piece has been played regularly since its premier in the late ’90s. A thoroughly approachable piece overflowing with clean consonances, it struck me that such a texture really does put into stark relief the few sharp edges that pop out from time to time. In particular, the theme which materializes homophonically in the outer movements is not harmonically adventurous (and need not be), but its coalescence in a sea of flowing lines was quite striking.

In contrast, the Whitbourne showed up in some flashier clothes by way of the Shay Ishli Dance Company, which joined the singers on stage. The seven movements draw freely and liberally from a variety of religious texts in which light plays a role, and as these unfolded the dancers moved around and behind several screens through which the light flowed, at times creating shadows and silhouettes and at others showing through what appeared to be smoke from a smoke machine. I was up in the balcony for this one, so it was tricky to see if the smoke played a larger role below my field of vision, but from where I was sitting it was subtly handled. Throughout, Mousumi Karmakar’s tanpura played its foundational role, intoning 5-1 at various points as Sean Harvey accented entrances and colored the texture with tam-tam. Violist Bruce Williams played beautifully and managed to project even through the thickest of moments, all while the chorus delivered a strong performance under Johnson’s direction.

It’s heartening to know that among those named Official Texas State Musician of the Year is a prominent classical musician (two actually; Robert Dick was the inaugural honoree), mostly because it’s not simply a token honor. It’s indicative of Johnson’s impact on Conspirare and, by extension, on the Texas choral scene, and he more than warrants such recognition. I’m not sure that it’s the kind of thing that’s really on his radar though. He’s planning the next twenty years.