Composing on the Pacific Crest Trail

Beyond exploring our ever-evolving relationship to the natural world over tens of thousands of years, deep ecology, and humorous battle stories, 314 miles into my walk there have been a number of practical concerns and adjustments to make in my remote, mobile residency.

A couple weeks ago I had just drifted off to sleep when I was awakened by a slow crunching sound and a sense of movement under me. A few seconds later, the ground on one edge of my tent gave way and the whole thing toppled over. The next morning (after I had moved my tent at 3 a.m.) I awoke and looked at the map, reminded that the next water source was 19 miles away. And so, I took off down Mt. San Jacinto in Southern California, walking for 12 hours on a trail from a sparse dry alpine forest at well above 10,000 feet that steadily transitioned into a sweltering desert—slowly descending 7,000 feet of elevation over that 19 miles—until I got to a small water fountain near a privately owned spring that feeds a gated community of 20 houses clustered together in the middle of nowhere, around five miles from a huge wind farm on the desert floor. After setting about hydrating myself and putting up my tent, I settled into a night of 80-mile-an-hour winds (apparently there was a reason that wind farm was there), once again having my tent toppled over, even while having all of my possessions in the tent with me. 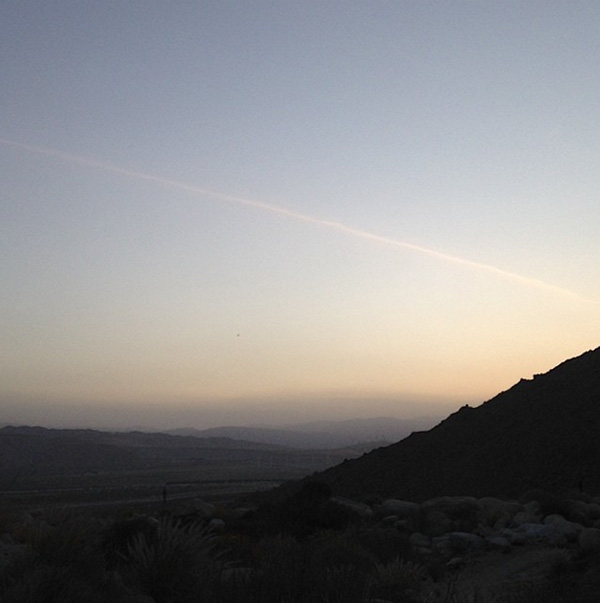 Despite life-long experience in the great outdoors, and a good long while as a composer as well, so far my self-created residency on the Pacific Crest Trail this summer is certainly unlike anything I’ve ever experienced before on a backpacking trip, and also unlike any few months of time dedicated to simply writing music.

In a way, the concept of the Pacific Crest Trail in and of itself is rather odd. Other long-established sacred walking sites in traditional cultures are in fact part of the landscape for those who exalt it—think of circling sacred Mt. Kailash in Tibet or the traversing of the Diamond-Womb trail by the esoteric Buddhists the Yamabushi in Japan, blowing conch shells and chanting—but on the PCT because of weather, water availability, and other things over a huge (but arbitrary) geographic area, you’re really only waving hello as you pass through myriad different types of landscapes or, previously, regions of different Native American tribes that used to fill and use the land in a very different way. The sheer ability to be able to walk it, though most of it is wilderness, is actually a product of the infrastructure of our society, and the reasoning for doing so exclusively individualistic.

Though I’m surely imbibing in this sense of individual exploration by walking and writing my own music, I’ve attempted to remove myself somewhat from this and tried to imbue my project with a sense of place by bringing in eight different composers along on this 2600-mile stretch. While walking I’m making a series of field recordings, which I then send to different composers living nearby. They then take a few minutes from a field recording and layer a brief musical response on top, which will be posted online. By doing this, hopefully my role becomes one of facilitator and collector as much as composer, and the project then is infused with a strong sense of bioregionalism. That is, the people who live nearby these sounds surely relate to them differently or more closely than I do, a tourist in a foreign land. For instance, Carolyn Chen, who received the first memory card filled with recordings as she is furthest south, knows the sounds of things like acorn woodpeckers or the Santa Ana winds howling through the trees, and therefore will think about them differently. By instilling bioregionalism into this collection of music and sound, people will be able to better understand the places they live, each other, how we relate to the natural world, and, perhaps, the arbitrary nature of the boundaries we’ve created for ourselves.

Beyond exploring our ever-evolving relationship to the natural world over tens of thousands of years, deep ecology, and humorous battle stories, 314 miles into my walk there have been a number of practical concerns and adjustments to make in my remote, mobile residency. I have a number of items with me that are needed to simply make the work, but even more items that are needed simply to live. However, since everything on my back weighs something, it became immediately apparent that I’d have to re-think how I was going to operate. My long-time standard yellow legal pad was the first to go as I opted to recycle the backs of my topographical maps instead of carrying extra paper weight, soon followed by my precious staff paper moleskin, spare writing utensil, and extra batteries. While walking I think about the direction of the sun not only to find shade if I need a mid-day siesta in the desert (the first 800 miles or so), but also where best to place my solar charger that is necessary to charge the batteries I use in my little Tascam recording device to make field recordings. 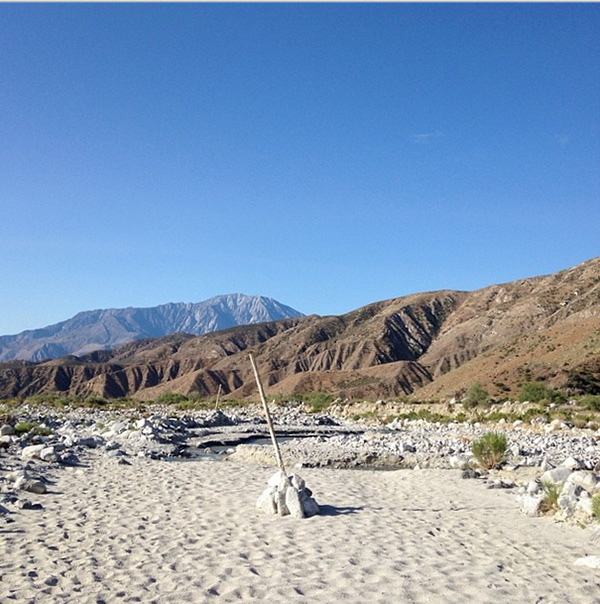 Each month through September I’ll be posting more thoughts on composing while slowly meandering through the wilderness—exploring ideas central to my work and thoughts on simply being a composer who’s removed from traditional city-life experimental composing. What happens when, due to battery/solar charging life, you have to take time to decide which music you’ll listen to every few days? One’s hearing changes when in the wilderness for a prolonged period of time, so how does that effect a sound-based creative practice? What is the effect if one does not attend concerts, hear live music or much new music for a period of time? How does the current incarnation of man’s sounds intersecting with nature’s impact us as people? I’ll be thinking about questions like these and writing about them when I take a break and come into towns and cities. Now if you’ll excuse me, I have to go purify some water. 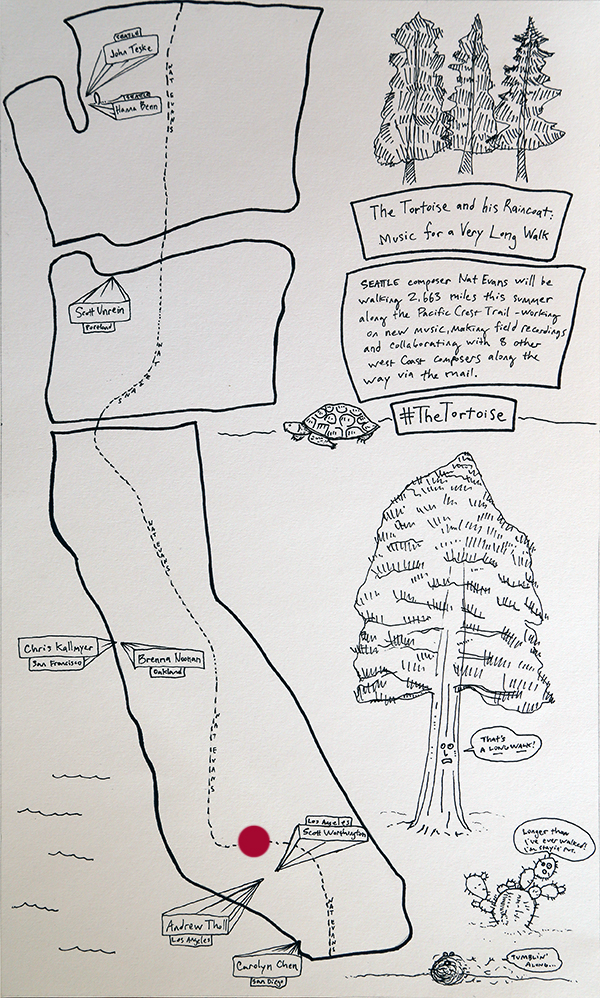 Where’s Nat at? When he sent in this post from the trail, he was approximately where the red dot is.