Composing and Responsibility
NewMusicBox
Written By

When you compose a piece of music it is something for which you are taking responsibility. I was reminded of this last week when I observed the final session of the first American Composers Orchestra/Mannes Summer High School Composers Intensive.

“May we always be in perfect pitch harmony, for no person or spirit is ever always in unison, and a duo or ensemble can be comprised of anyone or contain anything, and that is the permanent fact of great society”—Adam James Johnson (text from Royal Democracy)

There’s a lot of debate among composer types about whether you should write music for an audience or to please yourself. While I usually pride myself on being able to see both sides of an argument, I actually disagree with both camps. An audience is not a monolith and “hits”, as it were, cannot be manufactured a priori despite the claims of Phil Spector and other star makers over the years. Also, there seems to be some kind of audience for just about anything, so no matter how arcane the endeavor, it will appeal to somebody. And in the era of non-geographically based markets, there are usually enough somebodies around the world to make it even economically viable. As for pleasing oneself being the reason behind one’s composing, that seems horribly solipsistic. Why should anyone else care about something that is so personal? But, perhaps more significantly, why limit yourself to what pleases you? In my experience, it is often the things that displease me initially that lead to something really interesting. Perhaps then, what would be more viable way for a composer to think out his or her musical creations than either of these limiting binaries (although it’s somehow a combination of them) is to always be mindful that what you eventually put forward into the world should be something you feel strongly enough about to want to share with others. It’s about taking responsibility for what you put on the page and what people will eventually be interacting with as players and listeners.

I was reminded of this last week when I observed the final session of the first American Composers Orchestra/Mannes Summer High School Composers Intensive. This new summer program is designed for high school student musicians who have yet to compose a piece of music. In introducing the seven participants, ACO Education Director Kevin James said that while these young musicians might have had original melodies floating around in their heads before taking part in the intensive, and some undoubtedly could have even played what they were hearing, this was their first encounter with “the accountability of creating a score” for performance by other people. 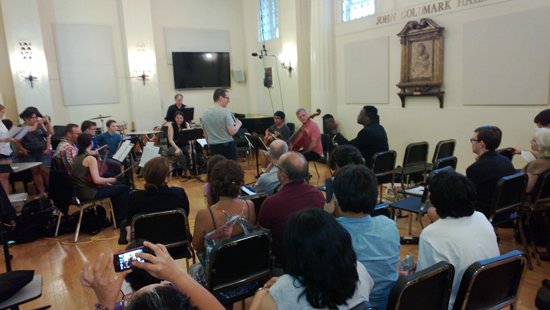 Kevin James and the [kāj] ensemble work through the details of one of the scores. (All photos by FJO.)

Over the course of the summer program, the students attended four in-depth workshops during which they learned about music notation standards and orchestration techniques. The culminating event, which is what I attended, was a reading by a professional ensemble of the music they created through these workshops. (The six musicians—Martha Cargo, flute; Eileen Mack, clarinet; Sarah Bernstein, violin; Lev Zhurbin, viola; Tomas Ulrich, cello; John Ferrari, percussion—were all members of James’s own [kāj] ensemble who, according to the program were “performing as guests of the American Composers Orchestra.”) James conducted and also joined the musicians on trombone in one of the pieces. Each of the students were allotted a total of 15 minutes, during which the musicians rehearsed and ran through their pieces. Some students created works for additional instruments which were played by their peers who augmented the ensemble; but the students were not allowed to participate as players in their own pieces and had to remain in the audience while they were being performed. The reason for that was to re-enforce pristine and diligent notation practices—again, to ensure that composers were fully responsible in the preparation of their materials and were held accountable for them.

The first piece, Silhouette by Ralph Mendoza, reminded me somewhat of Satyagraha-era Philip Glass in its cascades of interlocking arpeggiated chords. The composer actually cited a much earlier example—the moonlight sonata of Beethoven—as the source of his inspiration, but since Mendoza is a guitarist, it is easy to see how he could conceptualize arpeggios as the basis for a composition independently of either Beethoven or Glass. Toward the end of the next piece, Etude by McKinny Danger-James (who is Kevin James’s daughter), a germ motive grows in intensity, at first played by one instrument and ultimately played by everyone, completely taking over the piece. I thought it was a very exciting way to end a piece. Danger-James, is a singer so an infectious melodic fragment, as with Mendoza’s guitar-friendly arpeggiations, makes sense as a viable means for generating a composition, even one with no singers.

Valeria Olaya-Flores’s piece, Tiny Sun, called for improvisatory passages but the way she notated it resulted in much of her 15 minutes with the musicians being eaten up with questions from them. That said, once they were able to run through her score, I was fascinated by the somewhat off-kilter interaction of the instruments which called to mind Christian Wolff’s Piano Trio, so she’s definitely on to something. The parts for Celine Garcia’s Idea were also not completely clear to the musicians, but the composer acknowledged that this was due to problems she was having with her Sibelius notation software, particularly in the percussion part, although once it got going I was almost knocked out of my seat by the intensity of the snare drum pattern and a sudden thwack on the bass drum that seemed to come out of nowhere, as do so many of the most interesting sounds. How the musicians interacted with those two scores proved to be a valuable lesson for everyone in how to balance ambitious expectations with ensuring a satisfactory outcome. It’s a lesson that transcends musical composition and strikes to the heart of human communication.

Jonah Murphy’s Microsuite required the largest instrumentation of any of the pieces on the program, so students joined the ensemble to fill in additional parts for piano, saxophone, and a second percussionist. In Murphy’s score there was a part for trombone as well, but Kevin James decided that it was more important for him to remain conducting everyone in this somewhat complex piece. Perhaps more than in any of the other pieces I heard that afternoon, there was a keen sense of orchestrational color at play—phrases would be passed from one instrument to another, changing in nuance as a result of being stated in a different timbre. Passeggiando by Philip Zwick-Brunner was perhaps the most grounded of the pieces in the sound world of the so-called standard classical music repertoire. Overall it had a very 19th century European feel, albeit with a few 21st century quirks—I doubt anyone in the Romantic era would have featured such a prominent triangle part, a part which seemed even more insistent than the one in Brahms’s 4th symphony (the one that 19th century music critic Eduard Hanslick insultingly nicknamed “the triangle symphony”).

But the biggest surprise of the day came at the very end, Adam James Johnson’s Royal Democracy, which also required significant participation from the students in addition to the ensemble. At the beginning, three of the students recite a spoken text written by Johnson (which I quoted at the onset of this essay) against a backdrop of strings. Then various combinations of instruments interact with one another creating an almost Ivesian sonic panorama. For this, Kevin James finally did pick up his trombone, leaving the ensemble without a conductor. But it somehow all held together. For all its seeming freedom, Royal Democracy was about understanding what it means for people to play music together. And that was the clearest lesson of all about responsibility. 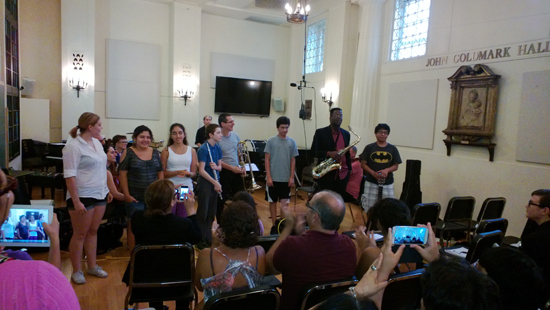 At the end of the performance of the last piece, all seven participants in the High School Composers Intensive took a collective bow with the conductor (Pictured L to R: Danger-James, Olaya-Flores, Garcia, Murphy, James, Zwick-Brunner, Johnson, and Mendoza). After all, that’s one of the rewards of being a composer!