How much should composers get paid for commissions? As composers ourselves, we recently set out to find the answer. We were motivated not only by our curiosity, but also by our desire to know what is fair and equitable.

This article is an introduction to a research report on the Composer Commission Pay Survey conducted in Fall 2019 by David E. Farrell and Loretta K. Notareschi. To read the complete report, visit www.composerpaysurvey.com.

How much should composers get paid for commissions?

This is a question most composers have. As composers ourselves, we recently set out to find the answer. We were motivated not only by our curiosity, but also by our desire to know what is fair and equitable. When approached by an individual or ensemble for a commission, we have had a perplexing variety of experiences. Everything from being told, “I will pay whatever you charge” to “We know this isn’t enough, but here’s what’s possible in our budget.” We have been paid on occasion what seemed like a generous amount; we have also done work for no financial compensation at all.

Informal discussions about commission fees with fellow composers did not help broaden our understanding. These conversations were frequently beset with embarrassment, defensiveness, and long-winded explanations of why the composers accepted fees that did not match their expectations. This kind of dialogue was, however, preferable to another common response: silence and unwillingness to mention numbers. Different as they may be, both reactions gave the same impression: composers were unsure what a fair commission fee would be. They didn’t know how much to ask for.

Some composers wonder why they’re not being paid more. Some are surprised by the amounts they have been paid.

The reality is that many questions surround composer pay. Some people wonder why they’re not being paid more. Some people are surprised by the amounts they have been paid. Some people worry they should have gotten more, but weren’t bold enough to ask for it. Some composers get asked to name their number. Others are told, “this is the budget.” Some of us are making a living from our commissions. Some of us have other jobs that help pay the bills. Many of us are jealous of people who do something different than we do and whom, we suspect, are getting paid more. The questions, to put it bluntly, are fraught.

How do people in other professions deal with such consternation? They look to labor statistics. We consulted several resources in our research looking for such statistics. The “Commissioning Fees Calculator” on NewMusicBox is a well-known resource that suggests fees for composers. But the origin of these numbers is unclear, and anecdotal experience points to them being higher than what many people actually encounter. The American Composers Forum gives some numbers in their “Commissioning by Individuals” guide, but the numbers vary widely and are again not sourced. The US government collects pay data for many professions, but the category in which composers are included also includes many other kinds of musicians, making the data not helpful in answering our question. Joan Jeffri’s Taking Note: A Study of Composers and New Music Activity in the U.S. is a 2008 study including data on  composer income. While it gives good numbers about overall income, its broad numbers didn’t give us the answers we wanted about individual commission fees. Sound and Music in the United Kingdom in collaboration with the Australian Music Centre presented a model we found most useful–their 2015 Composer Commissioning Survey Report asked about individual commission fees and primarily reported on those in the U.K. and Australia. Finally, in late 2020, we learned about another U.S. commission pay survey, conducted by Fahad Siadat. Dr. Siadat’s report is forthcoming, and we are interested to see its results.

Considering how much composers should be paid is even more difficult if we don’t know what composers are being paid.

After considering this existing body of work, we found ourselves with more questions. Considering how much composers should be paid is even more difficult if we don’t know what composers are being paid. Thus, we decided to create a survey to ask composers to name their commission fees.  We focused on what we most wanted to know: How much do composers get paid for commissions? What are the musical characteristics, including instrumentation, genre, and duration, of commissions of different amounts? What are the demographic characteristics, such as career stage, gender, race/ethnicity, religion, etc., of highly-paid, modestly-paid, and unpaid composers? Then we developed a series of detailed questions for the survey regarding these topics and others. We chose to survey composers whose commissions resulted in concert performances of live music, and we also chose to focus on commission income only. In fall 2019, we launched the survey and received data from over 200 composers, reflecting information on 871 commissions from 2017 and 2018.

Our first question was the simplest–how much did composers get paid for commissions in 2017-2018? The range of responses went from nothing–37% of the 871 commissions reported on were done for no fee–to an opera commission for $300,000, an impressive outlier from our dataset. The median commission fee of $1,500 ($150 per minute) best represents “central tendency” (a statistics term meaning the center of a dataset) from the data collected. The chart in Figure 1 excludes the $300,000 outlier and the unpaid commissions to show how fees were spread across various commissions.

While commission activity was clustered below $5,000, there were a good number of fees above that. A similar diagram (Fig. 2) shows commission fees at and below $9,000, excluding a large number of outliers (as defined by the interquartile method) and focusing on the area where most fees exist.

While the overall median gives a good sense of the big picture, we can look at instrumentation and genre to get a sense of how these affect commission fees as well. As can be seen in Figure 3 our responses were heavily weighted towards classical works, but the instrumentations varied widely. 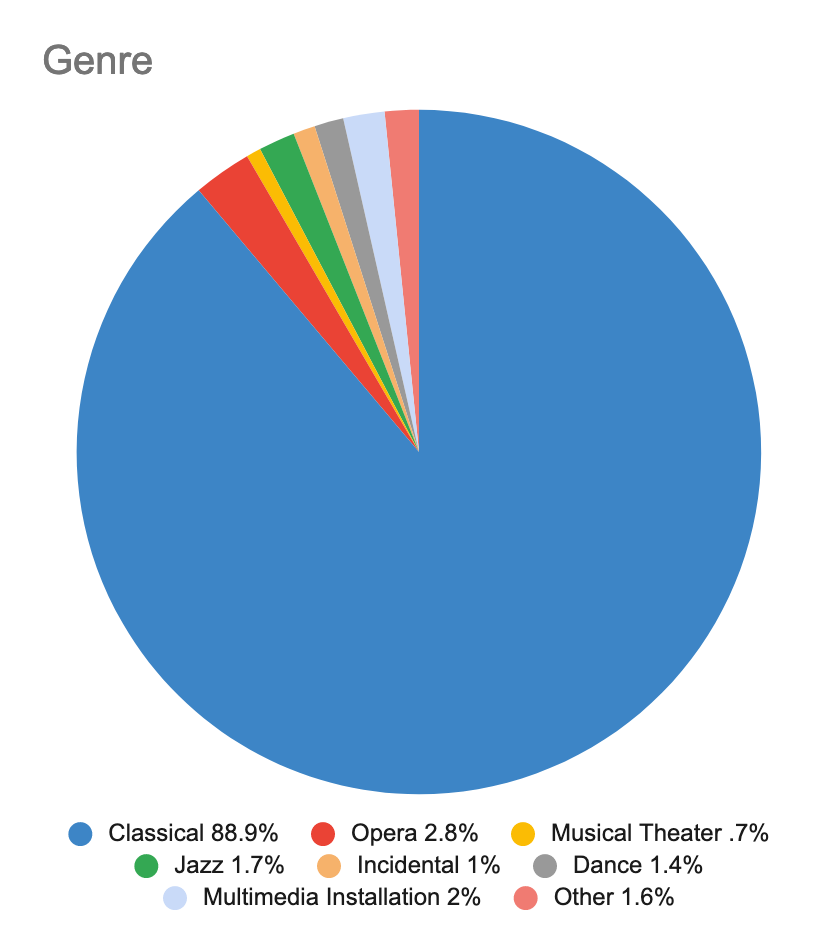 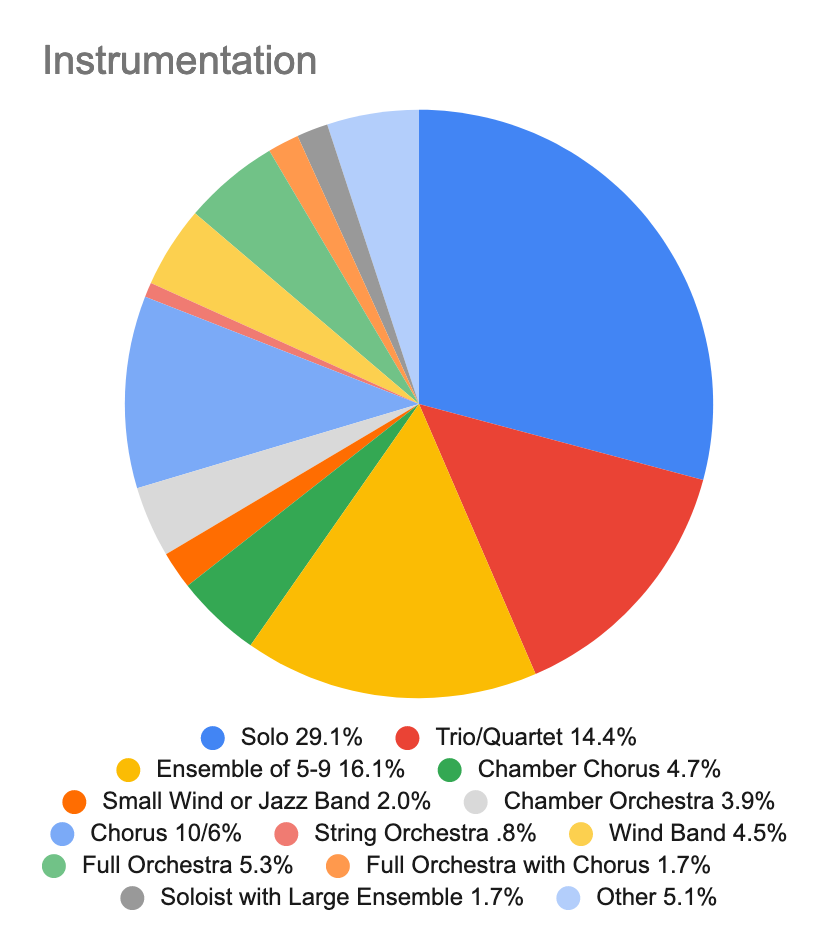 Fig. 4 Median Fees and Percentage of Paid Commissions by Instrumentation

In general, larger ensembles received paid commissions at a higher rate than solo works or small ensembles, and those commissions tended to be for larger amounts. Interestingly, the highest paid instrumentation per minute of music was large chorus. Large choruses were also the second most likely to pay their composers, with a paid rate of 87% (higher than large chorus was the instrumentation of soloist + large ensemble, at 93%).

In general, larger ensembles paid at a higher rate than solo works or small ensembles

Besides information on their compositions, we also queried the composers in our study about their personal characteristics, such as career stage, gender, race/ethnicity, religion, etc. We used a range of questions to ascertain the career stage of our respondents (Fig. 5). 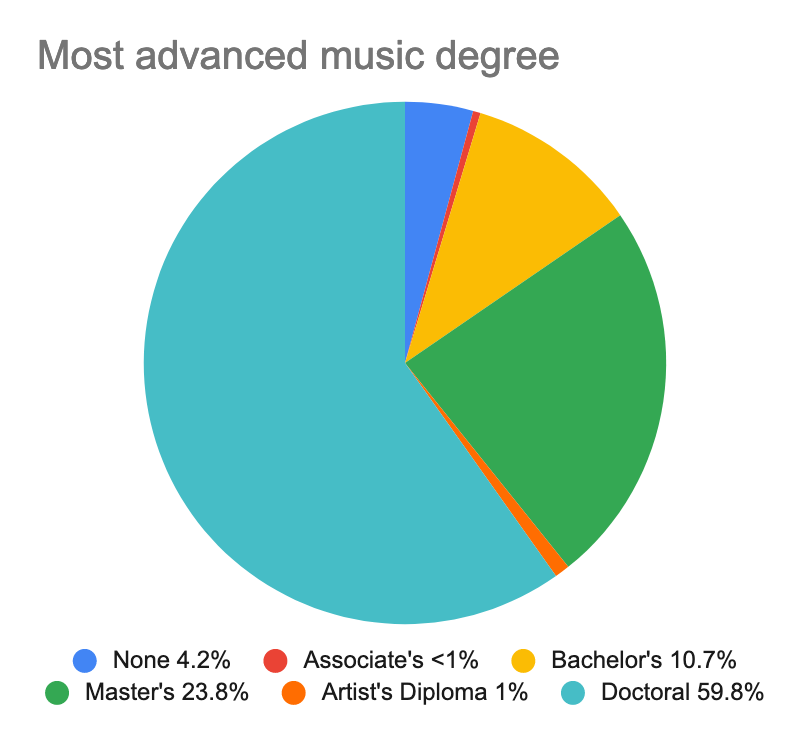 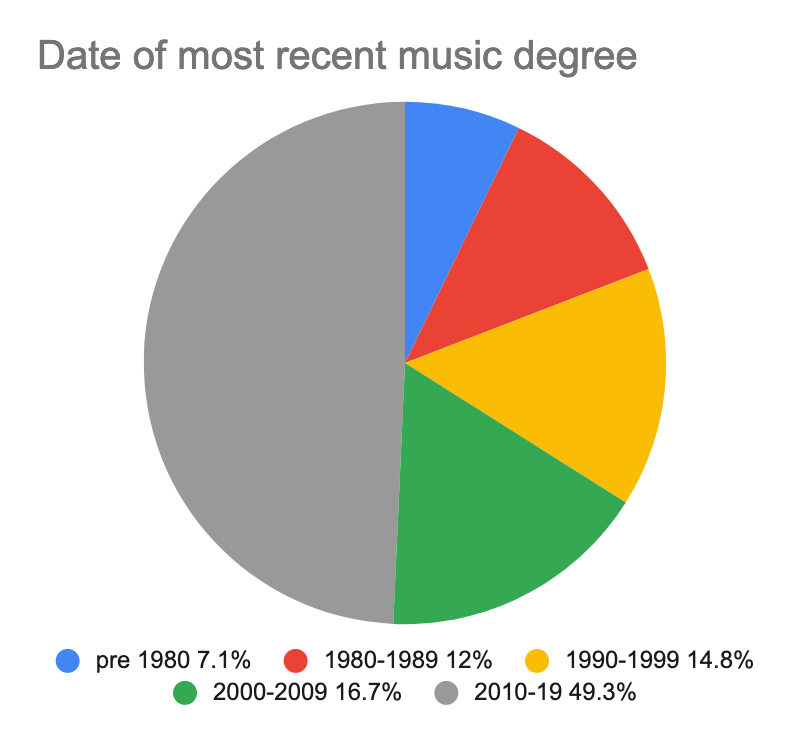 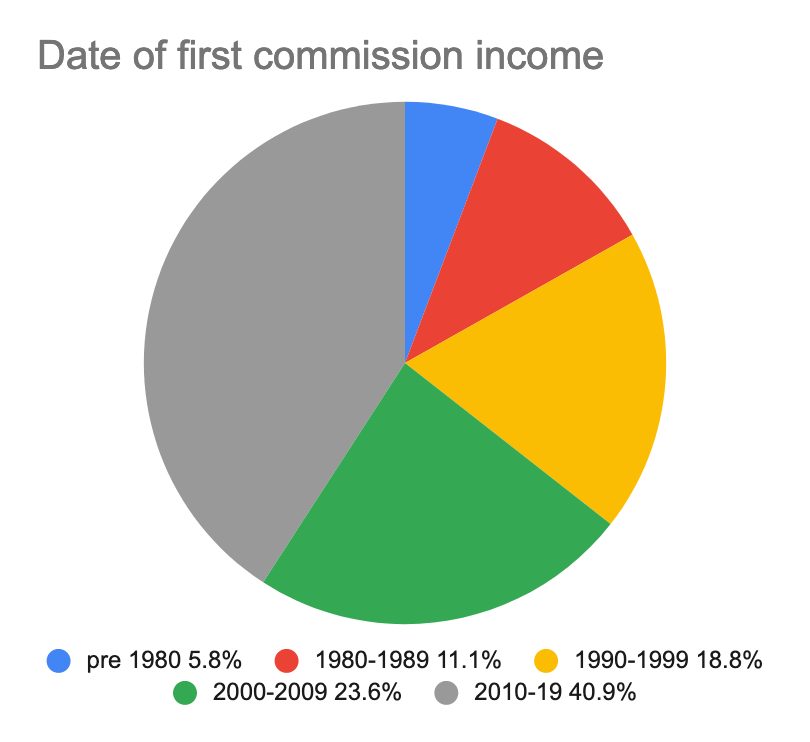 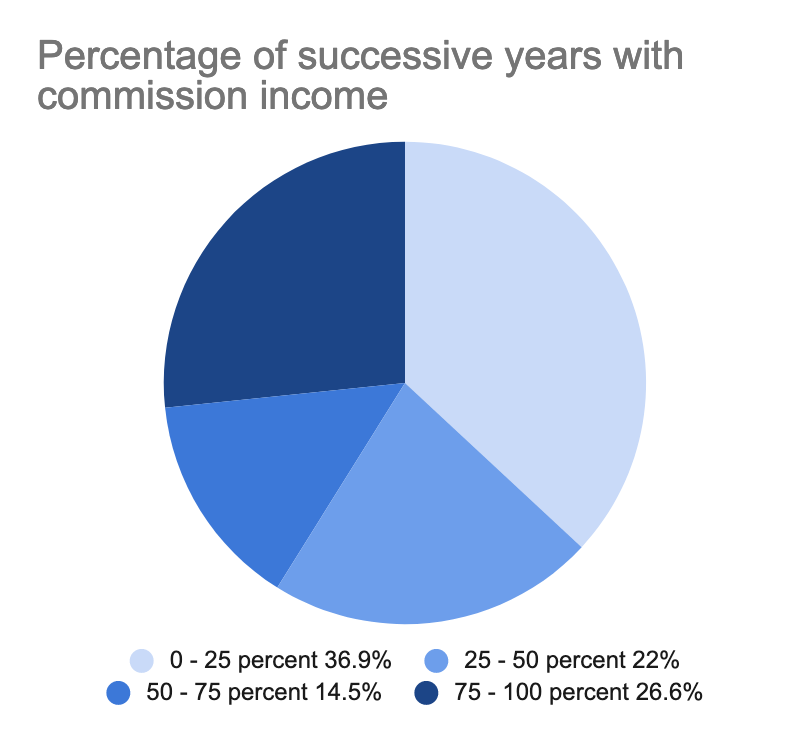 We can see the correlation of career stage and commission income data in Figure 6. The n values here are the number of people in each category.

We also asked our survey respondents for data about their demographic identities. The pie charts in Figure 7 show the breakdowns in gender, sexual orientation, age, region, population, religion, and race/ethnicity. The regional areas are defined by the U.S. Census. 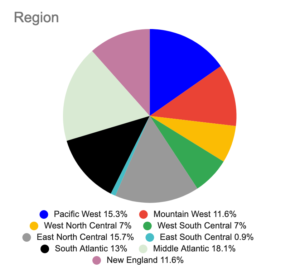 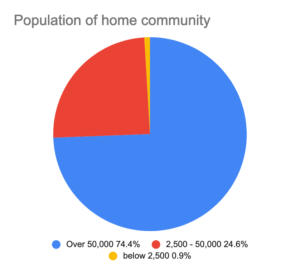 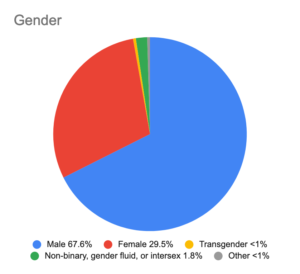 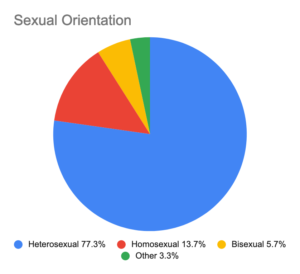 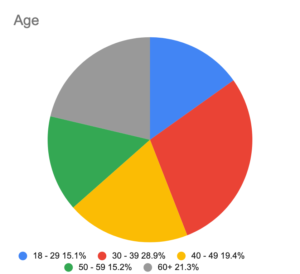 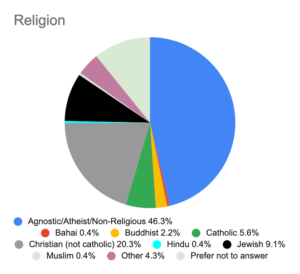 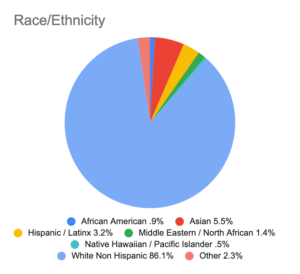 The respondents to our survey tended to be white, heterosexual males from large home communities. Age, religion, and region of residence varied more widely among our respondents. We considered fee information from all these demographic categories; selected results are presented in Figures 8 and 9. The n values are, again, the number of people in each category.

Who gets paid the most? 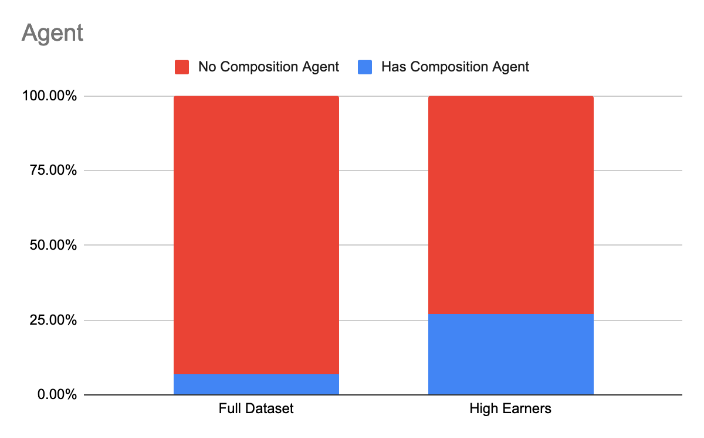 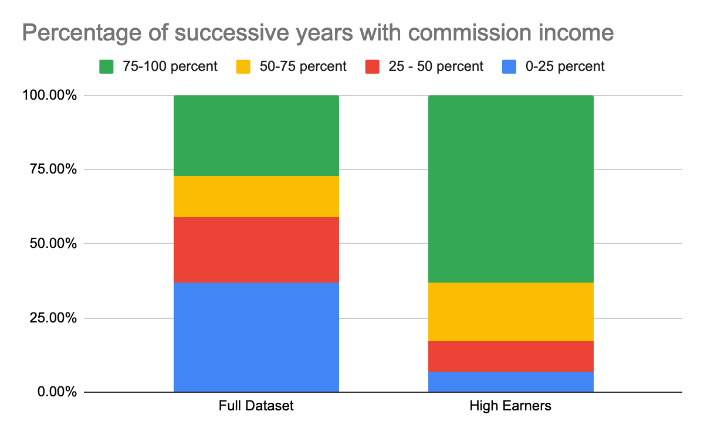 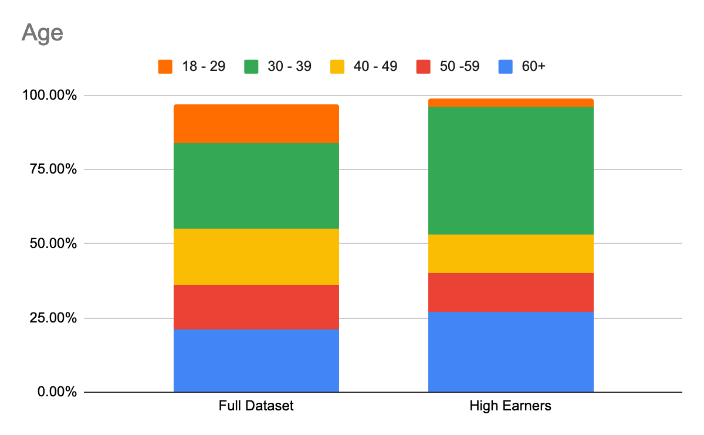 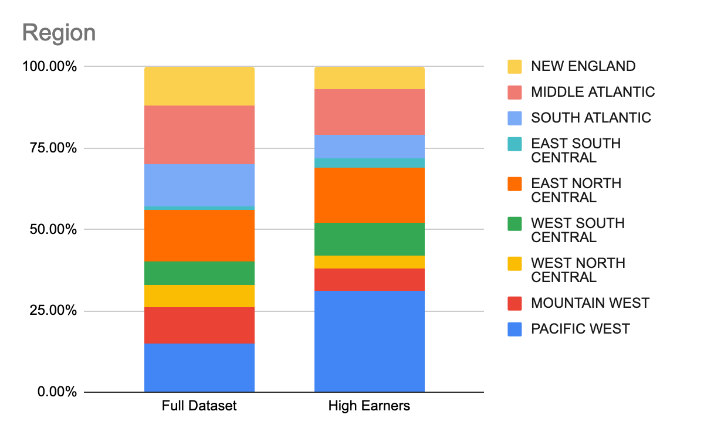 The major conclusions we were able to draw from our study are as follows:

The results and conclusions of the Composer Commission Pay Survey should not be considered comprehensive nor final.

The results and conclusions of the Composer Commission Pay Survey should not be considered comprehensive nor final. While over 400 composers began our survey, just over 200 completed it, and they presented information on 871 commissions that occurred within 2017-2018. This is just a snapshot of data over a limited period of time. Regular surveys of commission pay would provide a clearer picture of the economic situation for today’s composer. Further research, supported by composer advocacy groups and professional organizations, is necessary to obtain data that will empower composers in making informed professional decisions.

Beyond more data collection, we would also like to invite future researchers to collaborate with us to conduct more sophisticated statistical analyses of the data from this study. It is important to note that when looking at the “conclusions” that women are paid more than men and whites more than non-whites, we have not yet answered questions that would consider data variables in combination and find out what the factors are that may contribute to these pay anomalies. For example, we don’t know if the women or white people in our sample were more likely to have higher degrees, or more years of experience, or some combination of factors that would have made their higher pay unexceptional; or, controlling for all these factors, whether their higher pay was indeed unaccounted for by anything other than gender or race.

Many professional composers, at all levels of experience, take a mix of paid and unpaid commissions.

37% of the 871 commissions in our survey were unpaid. Around half of all chamber music was unpaid. These are significant numbers. What factors influence this reality? How can the new music community do better in compensating all composers? These are important questions.

Conversation about pay should be normalized.

Finally, our call for action is for members of our profession–composers, performers, and commissioners–to talk about the economic issues raised by our study. The recent trend toward open discussion of pay needs to come to the field of composition, too. We look forward to a time when discussions about money among new music constituents are not beset with shame, fear, or silence. We want to empower composers and commissioners to have frank conversations about what pay is fair. To do so would shed light on a difficult topic and free us all to work toward improving the new music economy.

We look forward to a time when discussions about money among new music constituents are not beset with shame, fear, or silence.

For a more comprehensive look at the Composer Commission Pay Survey, its methods, limitations, results, and conclusions, we invite readers to visit www.composerpaysurvey.com to read our complete research report (complete with footnotes!). We also welcome correspondence at davidefarrell@gmail.com and loretta.notareschi@gmail.com

The Composer Commission Pay Survey was planned, created, and reported on with the help of many individuals, whose assistance we gratefully acknowledge here. For help in envisioning and designing the survey, we thank Ed Harsh, Frank J. Oteri, Scott Winship, Alex Shapiro, Jazmin Muro, Christopher Roberts, Kala Pierson, and Iddo Aharony. For help with analysis, we thank Tim Trenary, Kristofor Voss, and Kris Nadler Dean. For help with editing the final report, we thank Natalie Kirschstein, Carla Aguilar, Kevin Garlow, and John Pippen. Finally, we thank all of the respondents to the survey for their generous time in recording responses.”